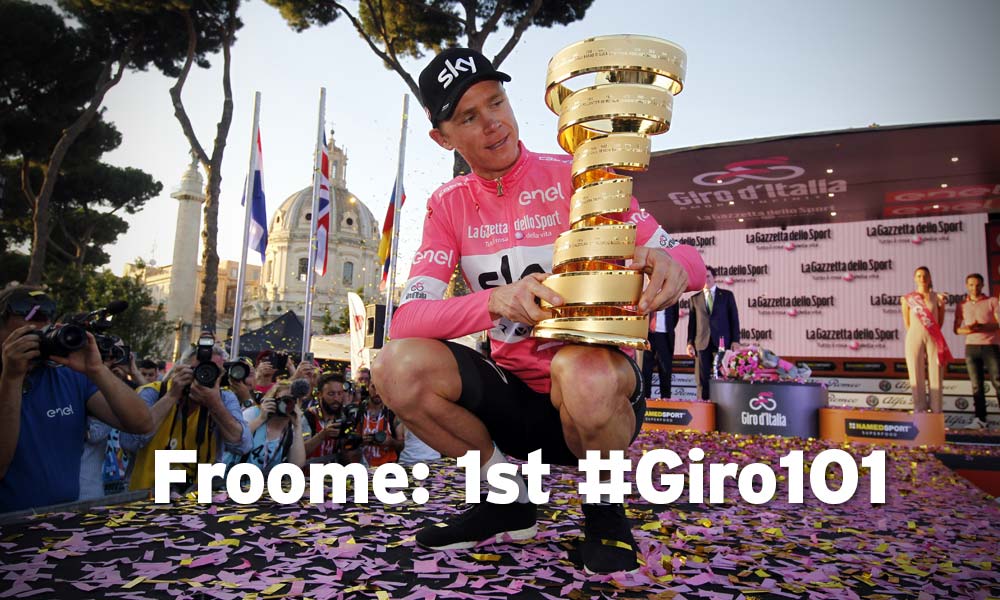 When he is in form, there is no one else in the world who can climb quite like Chris Froome. His style isn’t exactly pretty but it certainly is effective enough to win one Grand Tour after another after another…

The Giro d’Italia continues to set the standard in racing for the Grand Tours. Exciting from beginning to end, the 101st edition lived up to the considerable hype that preceded the race that began with an ambitious plan and concluded in the Italian capital. Starting in Jerusalem and ending in Rome, there are reels of highlights that will be considered for years to come as many remind themselves of the year in which a rider collected the triple crown of Grand Tour victories.

Chris Froome has won them all but the public reaction does not exactly suggest that it is a popular conquest.

He is entitled to race and he is clearly gifted when it comes to riding his bike. As individual races, the stage to Monte Zoncolan in the second week, followed by the 19th stage – one that included the Colle delle Finestre, the climb to Sestrière, and to a finish at Jafferau – were epic contests. To see why Froome is the champion of the 101st Giro, watch these again and, even if you watched them live, you’ll still be astounded by the replay. They are amazing displays of conviction, strength, and courage. And they are difficult to ignore. They represent, in fact, some of the most impressive hours of cycling seen for many years.

It has been said that, in the past, Team Sky has spent a lot of money to make cycling rather boring. The metronome pacing, the dominant line-up, the cast of stars leading stage after stage and delivering their chosen one to victory had become formulaic… and despite the effectiveness of the approach, it is hardly compelling to watch.

The Giro of 2018, however, changed the script. The blue line was far from obvious most of the time. It was nestled back in there, somewhere inside the peloton – the one with far less riders than we’re used to seeing in three week races… the one with only eight men on a team instead of nine. Up front much of the time was a motley black and yellow group, an Australian-registered team with a 25-year-old Englishman as leader.

Simon Yates wouldn’t last the three weeks in the way he wanted. Victory eluded him despite his domination of the early climbing stages and weeks of wearing the maglia rosa. Pink eventually turned blue, as he rolled to Rome as the caretaker of the mountains classification, a shadow of the rider we saw stomping up climbs and onwards to three impressive stage victories while clad in pink. 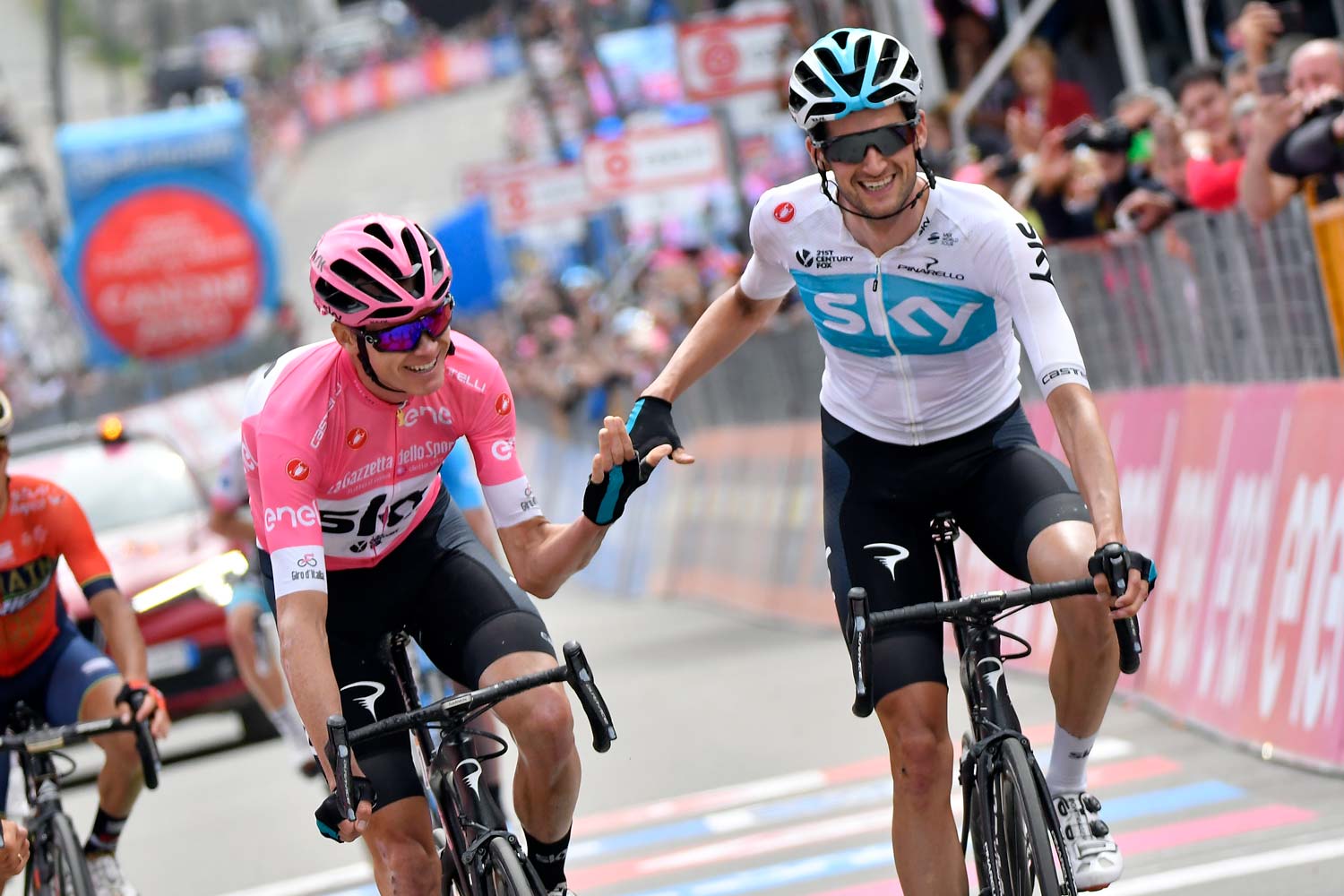 Froome and Poels reach the top of the final climb of the 101st Giro d’Italia.

Simon Yates lives to ride another day. In years gone by, he too has suffered the indignation of being caught by the anti-doping authorities. He served a suspension from racing in 2016 because of Terbutaline and it was officially recognised as “non-intentional anti-doping rule violation”. He trained through it all but didn’t race while the matter was being considered.

Froome, meanwhile, continues to suffer because of an “Adverse Analytical Finding”. It is one that could potentially cost him a couple of once-celebrated Grand Tour titles (possibly a third, if all goes well this coming July).

You know the story: it’s an AAF, not a “positive”, so he can keep racing. It’s just that all he’s achieved while preparing a presentation about how excessive traces of Salbutamol appeared in the control collected during his conquest of the Vuelta in 2017 may become redundant… or, rather, only relevant in replays on YouTube (or home recordings) – not necessarily the record books.

He trained through it all and did race while the matter was being considered. He is allowed to… that’s the rule.

And so pro cycling is enjoying a halcyon time – one in which one of the finest stage race riders of all time is winning in an amazing manner – but it is also a little ridiculous.

We have been asked to believe and cheer and celebrate success before. But many are no longer prepared to walk into a trap, one that involves an asterisk to denote a retrospective change in results. 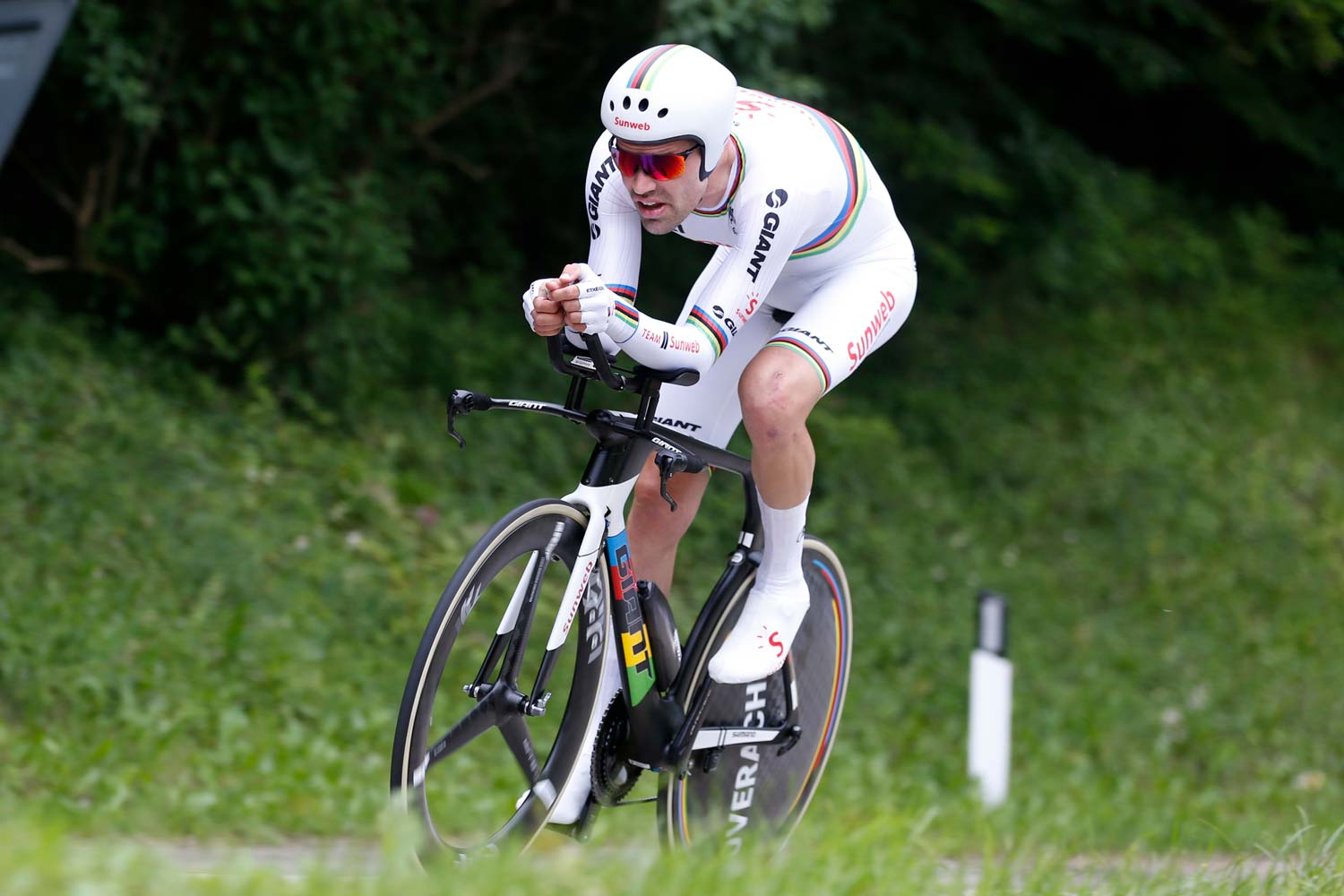 Tom Dumoulin (above): the defending champion is the runner-up.

The defending champion is the runner-up. Tom Dumoulin was the original leader of the 101st Giro d’Italia but he only spent a day in the pink jersey. He won the first TT but was second in the next; from an Australian perspective, it was an interesting twist because the longest time trial of the Giro was won by our national champion, Rohan Dennis.

BMC Racing gave Dennis the tag of leader and he delivered… to an extent. He wore the maglia rosa for five days (including the first of three rest days), won a stage and was the best placed on GC of the team in 16th. But he was almost an hour behind Froome (56:07). Such is the discrepancy between first place… and the rest.

Well, Dumoulin was still within striking distance on the penultimate stage and he tried as best he could to dislodge Froome from the top position but he ultimately wavered, lost six more seconds on the final climb of the Giro and finished as the best of The Challengers, 46 seconds behind The Champion*.

We wait to see if Froome holds on to the title. It’s an interesting line of conversation: will he? Or won’t he?

No one seems to know. He says he’s confident that he will be able to explain his situation with Salbutamol from last September but others have made similar claims in the past… and yet they have been suspended and results achieved struck from the record books. And we know from past experience that a Giro champion can lose a title after it has been won.

All that aside, the Giro of 2018 was indeed a compelling contest, one that could have been appreciated by many more viewers if the TV rights weren’t quite so poorly managed (but that is a conversation for another day). It was a race that started in controversy and ended in controversy and although the winner’s jersey has been presented we wait to see if it lasts the test of time. 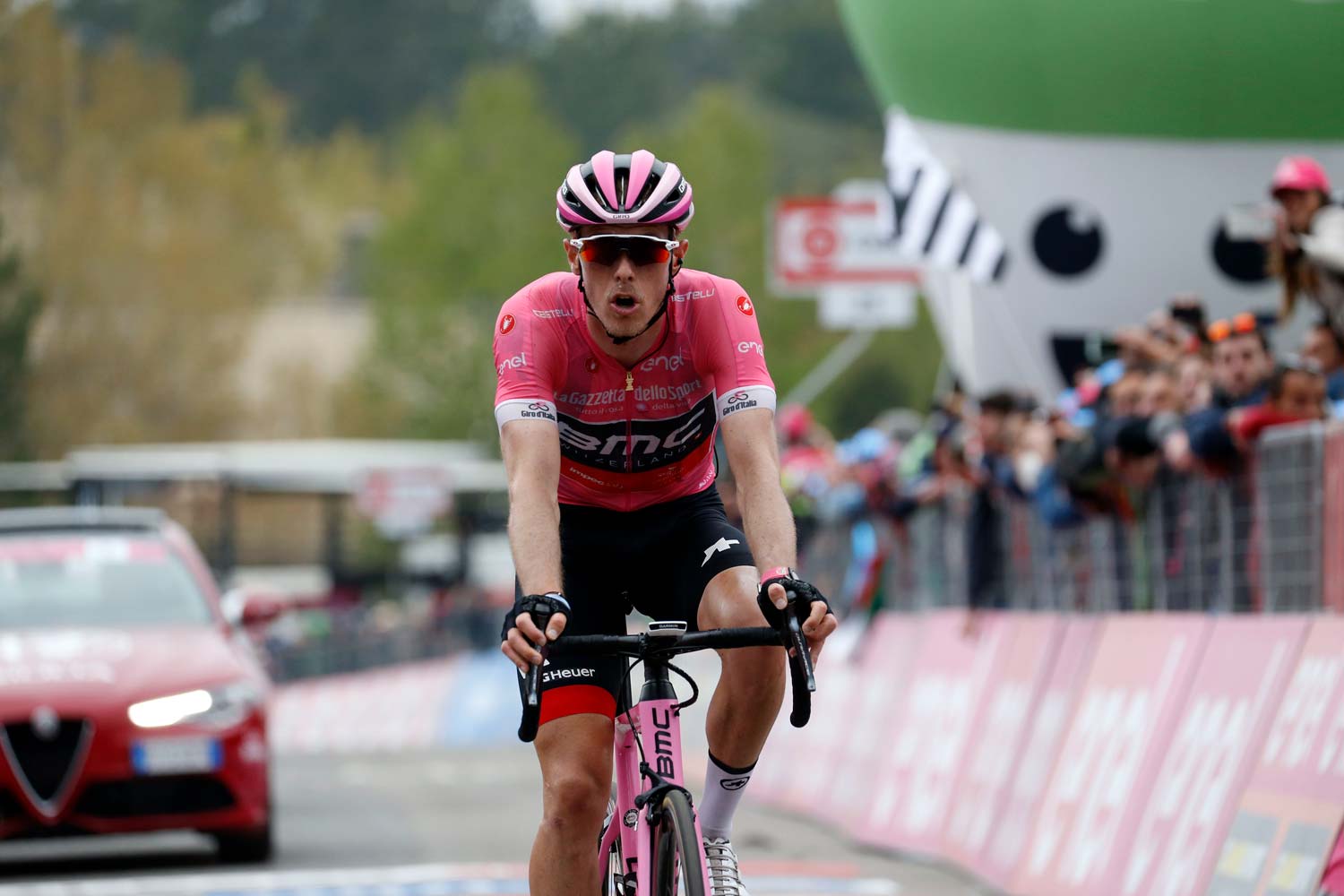 Rohan’s final moments in the pink jersey… in 2018.

Note: May is an exciting time for cycling and there’s always much to say about the Giro d’Italia. For RIDE Media, it is also a hectic period as we produce the Official Tour de France Guide. It has been fun to watch the Giro while considering the Tour… but our coverage of the Italian race has been scant, while we focus on another task.
– Rob