A glut of leaders at Team Ineos has created a spill. And, after months of speculation, news has emerged about a planned team transfer for Chris Froome.

Take note of the wording. “The Israeli team and the legendary champion will sign a long-term contract on August 1st that will see Froome wear ISN’s blue and white until the end of his illustrious career.”

‘ISN’ is the Israel Start-Up Nation pro cycling team. ‘Froome’ is the four-time Tour de France champion and most decorated Grand Tour rider of his generation.

And “will sign a long-term contract on August 1st”, suggests that the deal is indeed done.

He will sign it next month. And he will race for a different team in 2021. 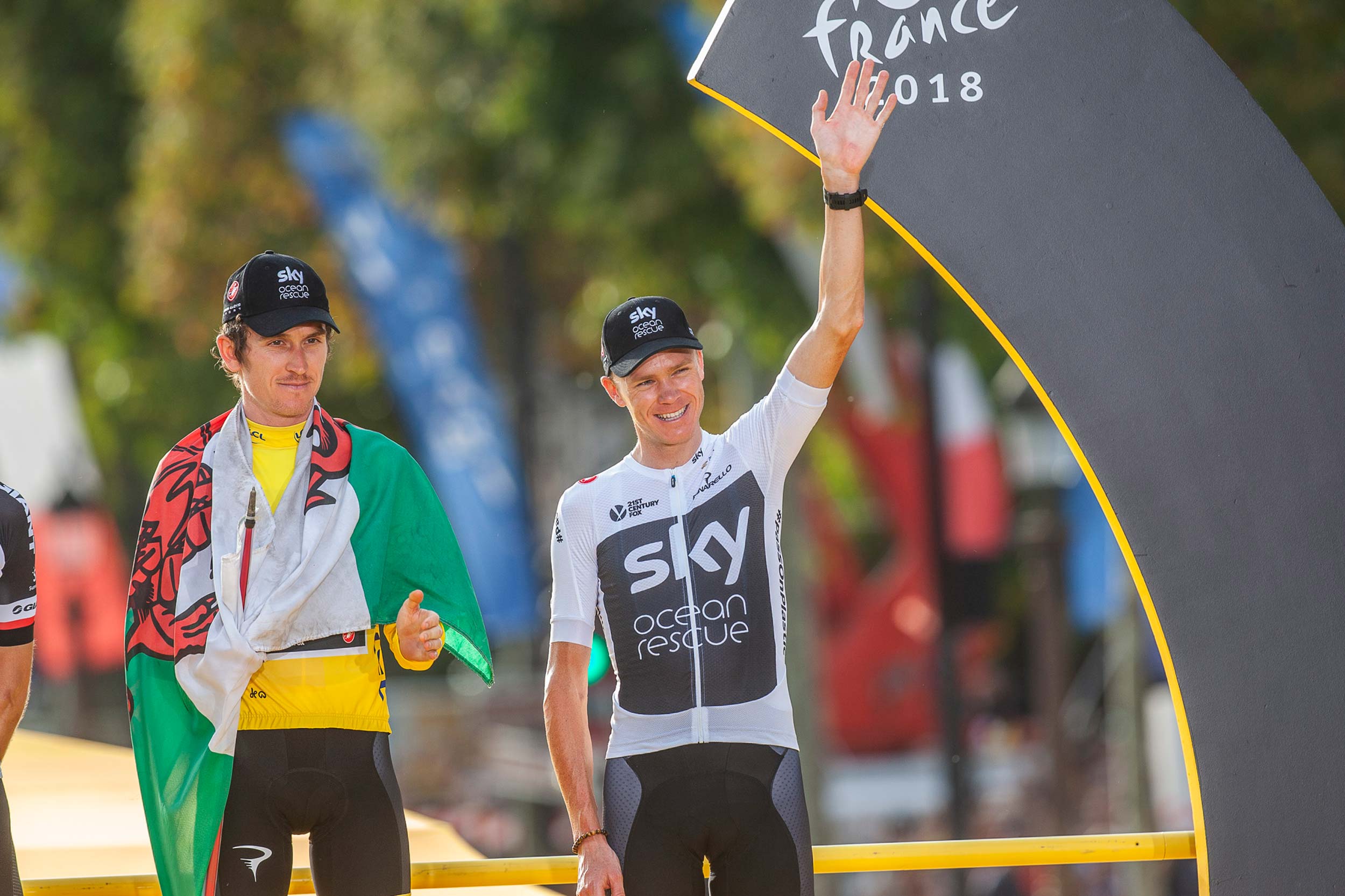 The rumour mill has been working hard on grinding this story out before its due-by date. There’s been speculation about Chris Froome and Team Ineos for months now. Is he The Leader for Le Tour? Is he moving on? What other teams are courting him? And so it has gone for some time.

Anyone would think that he was the leader of an Australian political party in the past 15 years. You know how it’s been: one day, Prime Minister of the nation, the next day someone whispers “spill” and the media buzz grows loud, quickly. And, as we’ve seen in Aussie politics, it generates the kind of noise that eventually topples a PM.

Was it like that at Team Ineos? The darling of the team is due to leave at the end of the year and it’s because of a problem other squads in pro cycling would only dream of – too many leaders.

With Froome’s contract due to expire at the end of the year, and with Egan Bernal already signed up with Ineos through to the end of 2023, the timing for a spill was ideal. 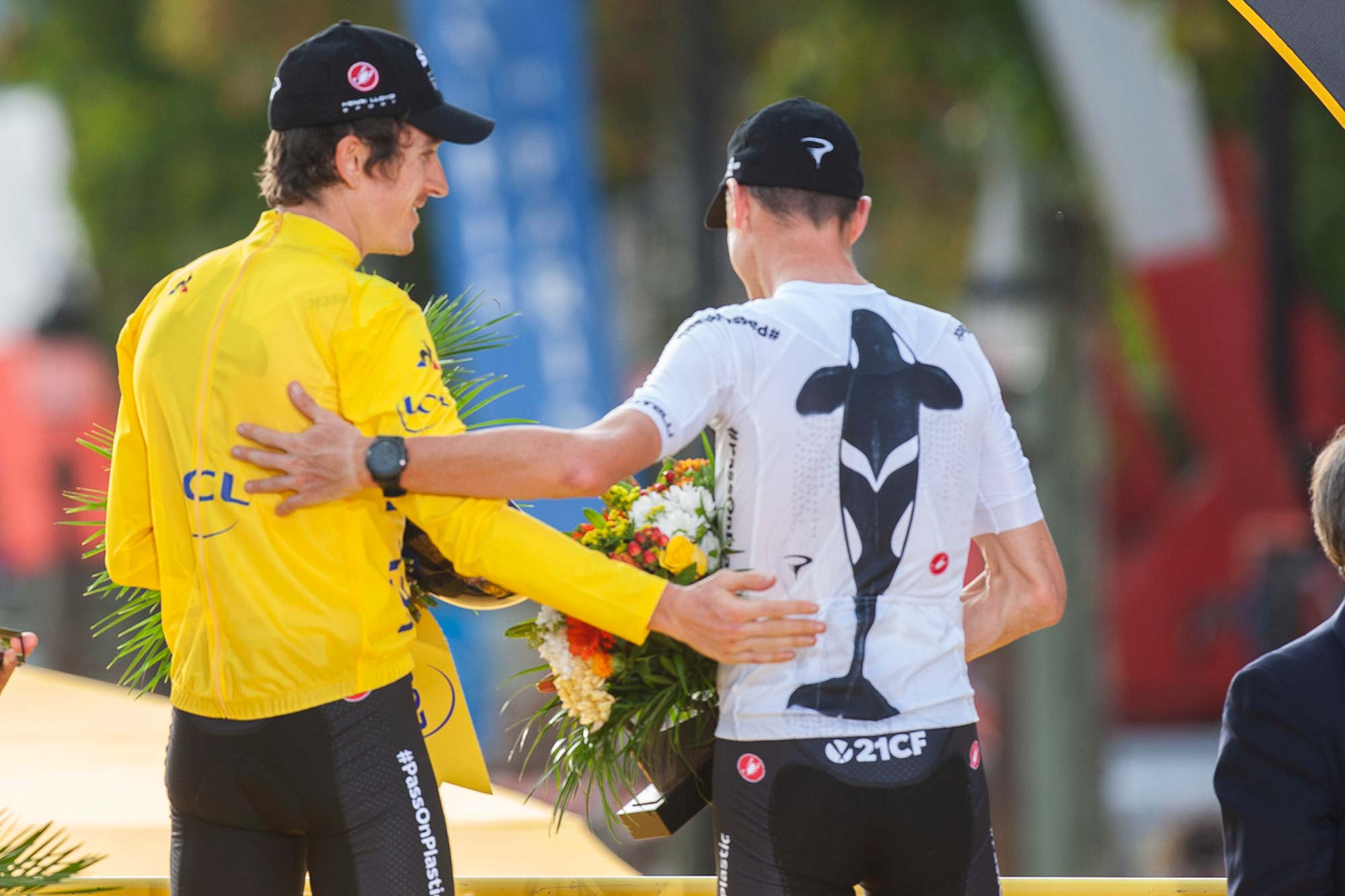 #PassOnPlastic was the theme for the team in 2018. (Photo: Jean-Pierre Ronco)

Add into the mix Geraint Thomas’ presence – on a roster of 30 that also includes a Giro d’Italia champion, a former road race world champion, and two-time TT world champion – and suddenly even a rider like Froome seems expendable.

Froome, remember, was (originally) the runner-up in the first Grand Tour he finished with the team that was then called ‘Sky’. (That was the Vuelta of 2011, and he’d eventually be elevated to winner… but only years later, and only because of another doping issue in cycling.)

He then finished runner-up in the Tour de France behind a team-mate who was duly set aside as a Grand Tour rider; after the Wiggins triumph in Le Tour 2012, Sir Brad would ride again… but never with the kind of backing he enjoyed before Froome demonstrated that he too had what it took to win a three-week bike race.

Back in 2013, the potential of two leaders was already a problem for Team Sky. They didn’t even bring the defending champion to the 100th edition of the Tour de France; instead it was all about Christopher Froome. 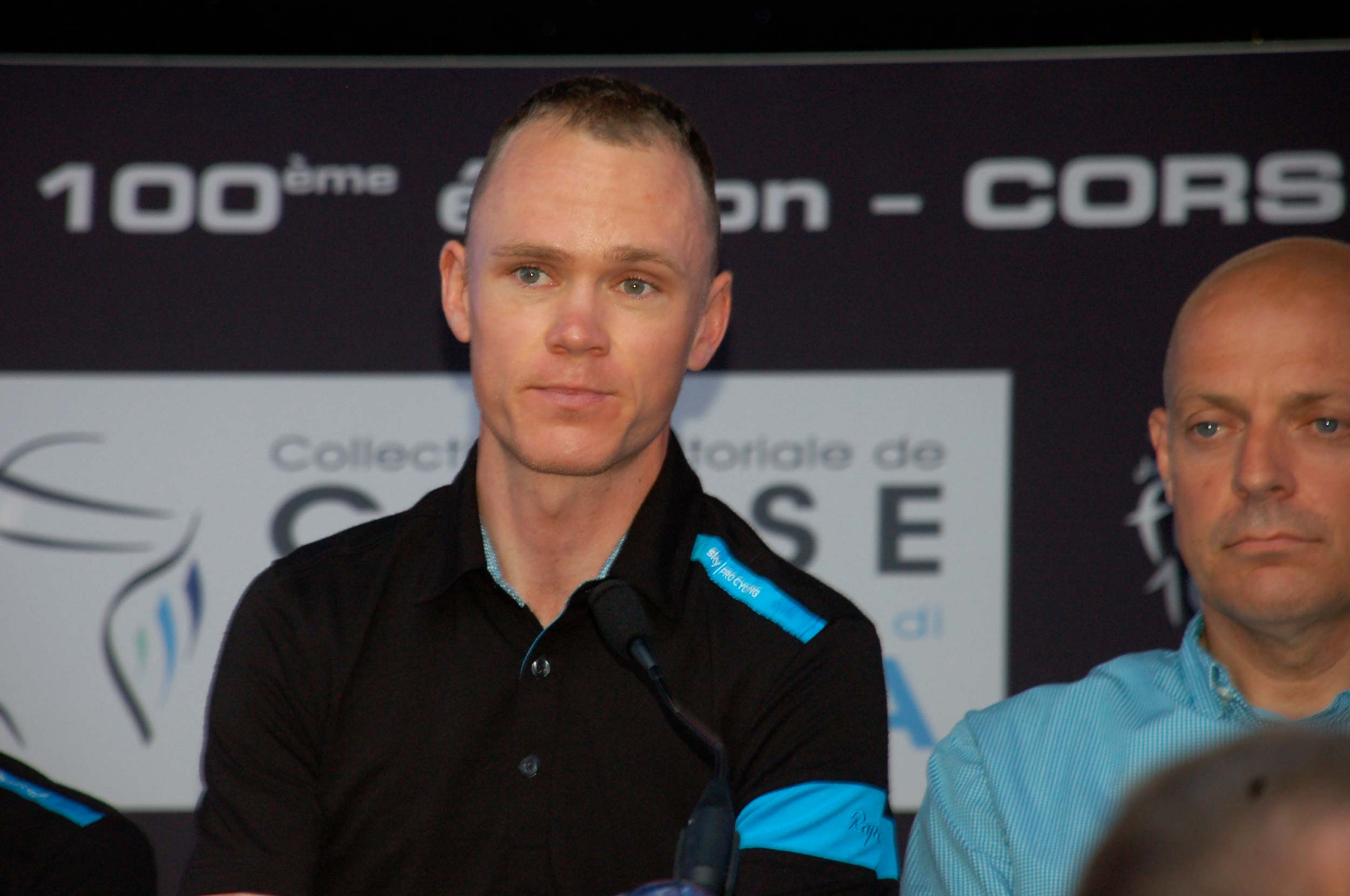 Froome and Brailsford at the pre-Tour press conference in 2013… (Photo: Rob Arnold)

At the Grand Départ in Porto Vecchio back in 2013, he’d just turned 28. He was out of Africa and on a trajectory that is rare in modern cycling. He’d win that first Tour de France he started as outright leader.

There was a hiccup to the dream sequence, however: in 2014, after a British start for the British team, the British rider (from Kenya) would crash in the cobbled fifth stage of the Tour (before reaching the cobbled roads) and abandon the race as defending champion.

How about the Vuelta a España (again)? Or the Giro d’Italia?

Sure thing. And so he did: after his fourth Tour de France victory, Froomey went and won the Vuelta, then the Giro… and it was quite a show. (Oh yeah, there was that thing with the puffer and the public announcement of an anomaly and the declaration of a ‘positive test’ and the protracted proceedings that followed… but that’s all history now. Nothing to see here, moving right along.)

Since that triple-treat of Grand Tours – one win after the other: Tour, Vuelta, Giro – it has been a rollercoaster of good and bad for Froome.

He’d go back to the Tour in 2018 but watch his Welsh mate manage the cobbles of stage nine, the climb to victory in stage 11 at La Rosière, before winning again – wearing the yellow jersey – at Alpe d’Huez in stage 12. Geraint Thomas was a force in 2018 and not even Chris Froome could beat the former trackie from Cardiff.

Still, third place in the Tour of 2018 – beaten only by a team-mate and the reigning TT world champ at the time, Tom Dumoulin – was a sign that age isn’t slowing him down. 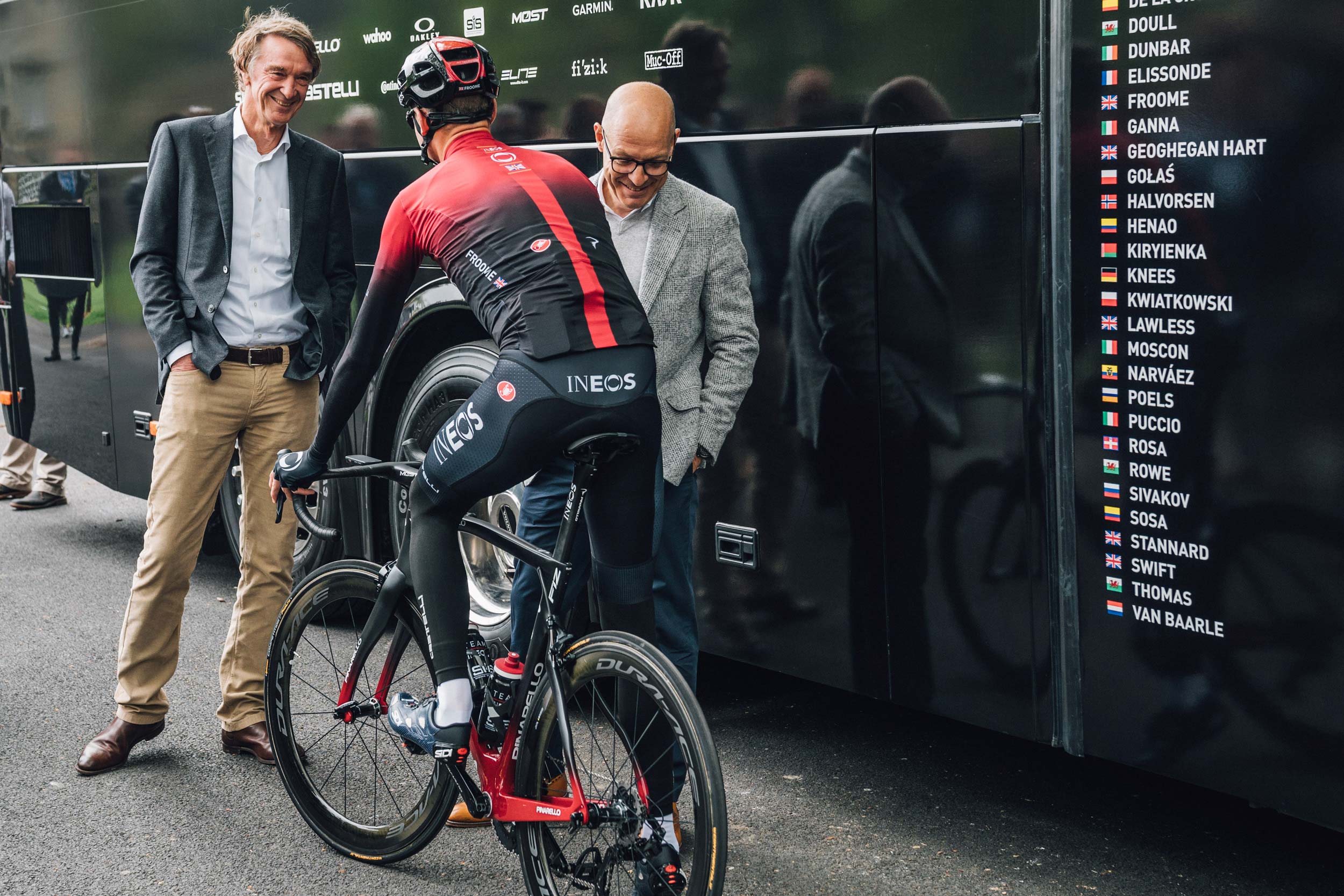 Jim Ratcliffe and Dave Brailsford talk to Chris Froome at the time of the announcement that Ineos would replace Sky as sponsor of the British team, midway through the 2019 season.

Onwards he raced. Chris Froome was now a father and an accomplished professional. He had trophies in the cabinet but plenty of fire still in the belly back in June 2019 when he had set his sights on another crack at the yellow jersey. But he’d not get that chance last year.

Yep, he blew his nose while reconnoitring a time trial course in France and that was the end of racing for a while. The crash could have ended his career. It didn’t, but it did force him to watch the Tour of 2019 instead of race it.

And we all know what happened last July: a young Colombian burst into prominence, earning leadership status, and taking the yellow jersey on an amazing day at the Tour de France. Egan Bernal would arrive in Paris at the end of his second Big Lap as champion. 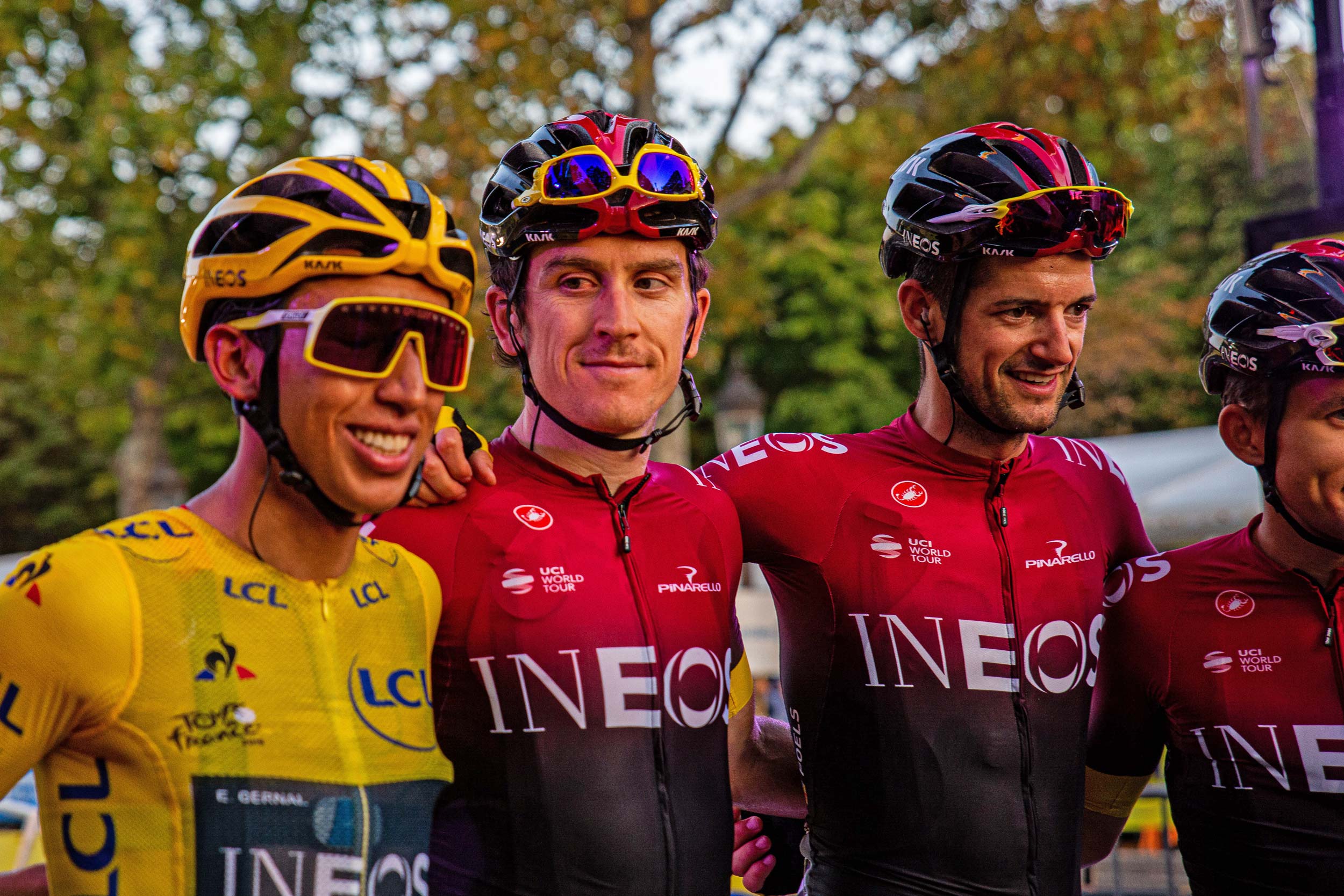 The two most recent Tour de France champions: Egan Bernal and Geraint Thomas, in Paris at the end of the race in 2019. (Photo: Jean-Pierre Ronco)

The runner-up was the defending champion and, in its first Tour as sponsor of what had been Sky, Ineos scored the top step of the podium of cycling’s biggest race.

Bernal first, Thomas second… and Froome wondering what to do next year.

He would recover. He would race again. And then he would use the lockdown period to get some paperwork in order, evidently making a few calls to Israel.

Froome continues with the team that elevated him to superstar status in 2020… but, as of last night (Australian time), he has formalised his intentions to move on.

“The legendary champion will sign a long-term contract on August 1st.”

The formal transfer period doesn’t kick in until the first day of next month. But we know now where he is going. The Israel Start-Up Nation has won the bidding war. The contract has been drawn up and the terms agreed. It marks the end of an era for a dominant team and a rider who consistently earned some of the most prestigious victories in cycling.

With just 50 days to go before the Tour of 2020, we sit back and watch how Team Ineos’ management handles the delicate question of leadership for a race that three on the roster have won before.

It’s been an interesting ride up until now but the next chapter is also bound to be compelling.