There’s a habit forming. It started with trepidation but within a week the morning ride on FulGaz has become something of a routine. Here are a few quick thoughts about the experience after today’s 25km journey from Cernobbio to Cadenabbia in Italy (while riding in Sydney). 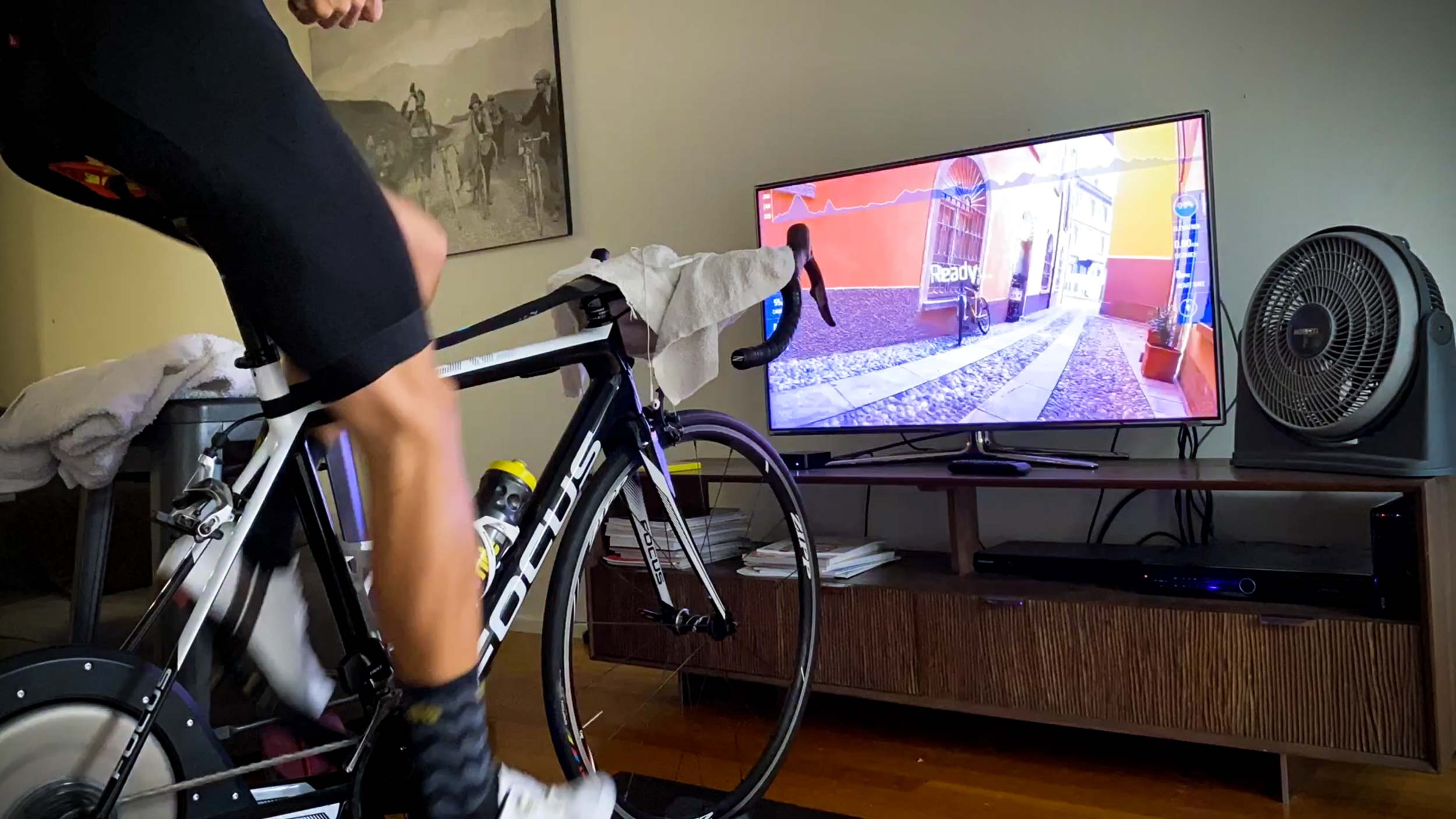 It started with a quick adaption ride. Instructions were turned on and FulGaz’s ‘coach’, Bernard, offered suggestions on what to concentrate on: cadence, power output, and the kind of stuff you’d expect from the virtual cycling world in 2020.

For me, it was just a chance to get used to the system, to understand the navigation and settings – to experience what FulGaz is all about.

That was so last week. After over a year off the smart trainer, it was time for a comeback.

Day two: quick spin around a lake in Bavaria to get used to the FulGaz feel.

Day four: took a rest and concentrated on another of my #IsolationExercise challenges, a stair running agenda that I set myself a few days earlier*. (See below for explanation.)

I’m up to day seven now and have already spent around 10 hours on the smart trainer, with a few hundred virtual kilometres covered.

Morning routine April 2020.
I preferred it when I woke up, put my kit on while having a coffee and then rolled the bike outside to ride.
But…

At least, with @FulGazApp I can ride 40km in Ethiopia before starting work in my Sydney home office. https://t.co/deec7vbHl3 pic.twitter.com/xKXVC0xSXp

Our house isn’t large and there are four of us here – two adults and our two kids. We’re doing our best to adhere to the self-isolation policy that has rapidly become part of life.

It’s been two weeks since we left our suburb, a fortnight (so far) with home schooling and, during this time, it seems logical to minimise any risks – of infection or, really, anything that could potentially put additional pressure on the health system.

Of course, I dearly want to ride my bike and do it in a way that I’ve enjoyed cycling all my life: outdoors with the wind on my face, scenery rushing by, and with the company of others. But I’m not doing that now, not in April 2020.

Instead, we’ve decided to transform the living room into one ‘training centre’ – or, it could now be dubbed, the ‘riding room’. Upstairs there’s our original indoor cycling set-up.

Our 14-year-old has been riding his own bike upstairs but, this week, began using my bike on the downstairs set-up, only with the saddle dropped a couple of centimetres. (Yep, they grow up fast.)

The nine-year-old has his MTB on the Kickr and we’re going to get him a new chain for his (eight-speed) road bike so he can use that on the 10-speed arrangement.

And my wife has started ‘borrowing’ my bike to squeeze in a daily ride.

I’ve been in this cycling game – as a profession – for almost 30 years, so it makes sense that there’s a bit of equipment like this at my disposal.

We’re also lucky in 2020 because, only a few months ago, the NBN finally came to our suburb and – get this – the connection actually improved. Yep, true story! (But don’t tell anyone, I don’t want to jinx it.)

For me, this new approach to cycling has been made possible by a range of contributing factors: self-isolation, indoor trainers, faster internet, the option to login and ride in a ‘virtual’ setting, and a need for exercise.

We coordinate our schedules and, after only a week, are already so used to seeing each other ride that those earlier distractions – the questions about where or how far or what riding platform – are no longer. Instead, while I’m riding, one of the kids will come in, peruse the screen, see the vision and absorb the data… and walk away without so much as a comment.

When I stop riding, we may talk about it a little. “Looked pretty,” she’ll say. “That’s near where we stayed back in 2008 when we had a family holiday.”

She then reaches for the remote, finds ‘Cernobbio to Cadenabbia’ on the ride menu, and adds it to her FulGaz ‘favourites’ list. 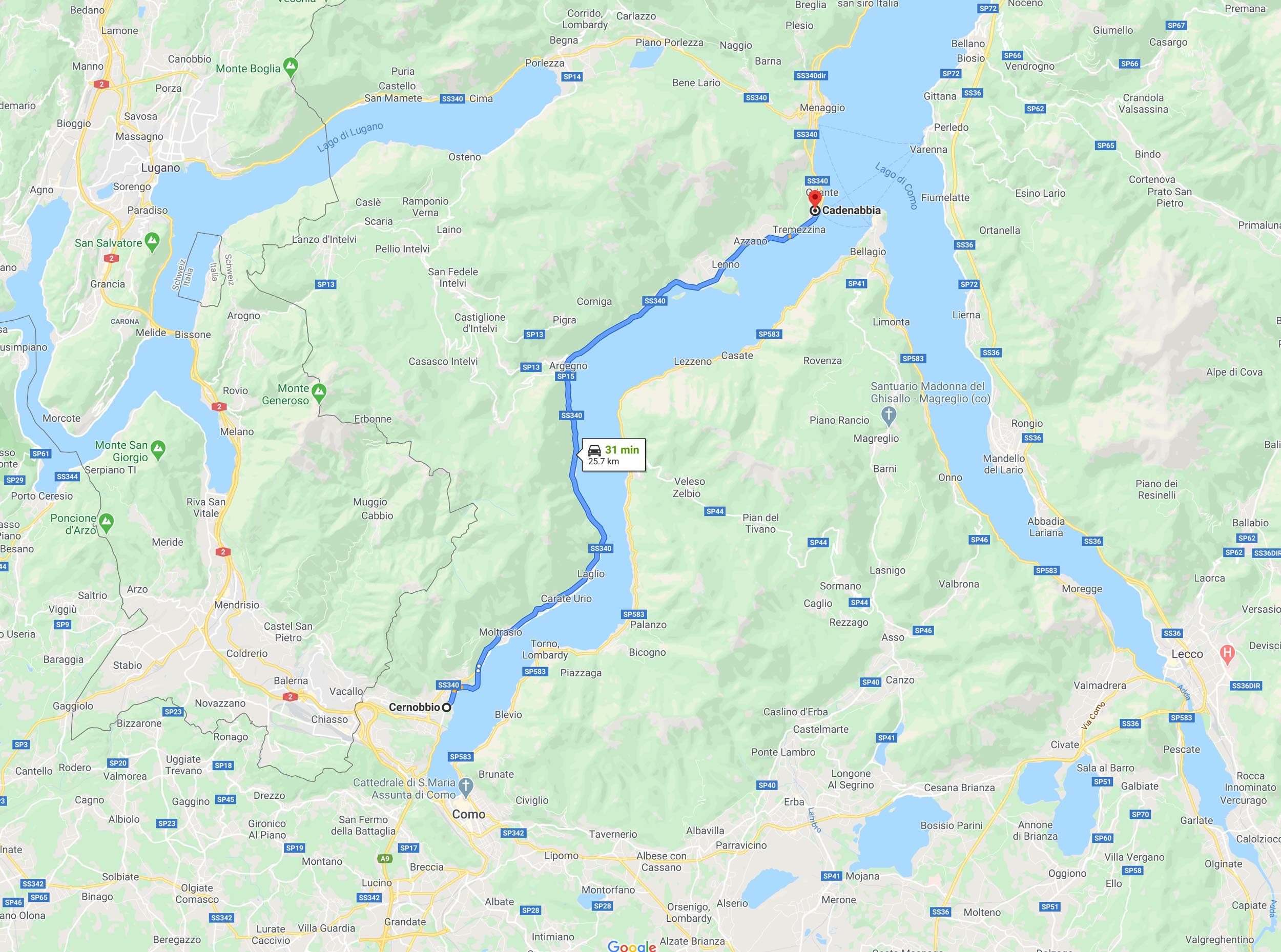 The kids are usually a little more analytical or, dare I say it, critical of my performance.

That’s a kind appraisal. It can get more scathing from the child ‘coaches’ (making me think I should tune in to Bernard a little more). This morning, for example, Mr 14 waltzes by while the flywheel is still spinning. “Fifty-five minutes, 173-watt average.”

It’s a statement, but he delivers it more like a question. He knows I know his numbers, and he knows his average watts per kilo – for rides that last a lot longer than what I’ve been doing – is more impressive than mine.

I write off his commentary as teenage ego and don’t let it bother me too much, not even when he walks off shaking his head before turning back and announcing, “You should push yourself a little harder, Dad.”

For me, this is about exercise: nothing more, nothing less.

I’m not trying to improve my ‘Toughness Score’ (171 today, 221 yesterday). I’m not training to win races. I’m not doing this to lose weight or to add numbers to my (private) Strava account.

I don’t even care too much about the data even though it’s there for me to study. When the time comes, I can look back over it and chart my progress. It’s early days now, but I can already feel an improvement in fitness. This is a by-product… as, really, I just like to ride my bike.

If I have to ride inside, then at least I can do so with some scenery (on FulGaz) or some company (on Zwift) or even some rivalry (on a range of other virtual riding platforms)… but often it’s just about the act of pedalling.

Plenty to think about during a ride…

This morning I had a visual treat on the screen as I rode a 25km section of the eastern shore of Lake Como in the Lombardy region of Italy. When I looked at the screen, I’d see villas and vistas (or buses and trucks). When I looked down, I’d see the glow of the Neo turn from blue to purple when the wattage got up near 200. On rare occasions, it’d turn slightly more red as the wattage numbers grew. (If you know the Tacx arrangement, you know what I’m talking about, but this isn’t a product review.)

Every effort is made by these virtual training platforms to keep you engaged and interested. They offer instruction and motivation and the kinds of things that the fit, enthusiastic leader of a spin class might yell at me (if, of course, I’d ever done one).

Sometimes though, I just ignore all the stimulation and data. Sometimes I just like to drop my head, relax my shoulders, and close my eyes.

I find that the mix of rhythm and effort can be quite meditative. And I play little games throughout the ride…

‘I’ll keep my eyes shut until the end of the next song.’

Or, ‘High cadence for one minute, big gear for the next minute.’ Etcetera. 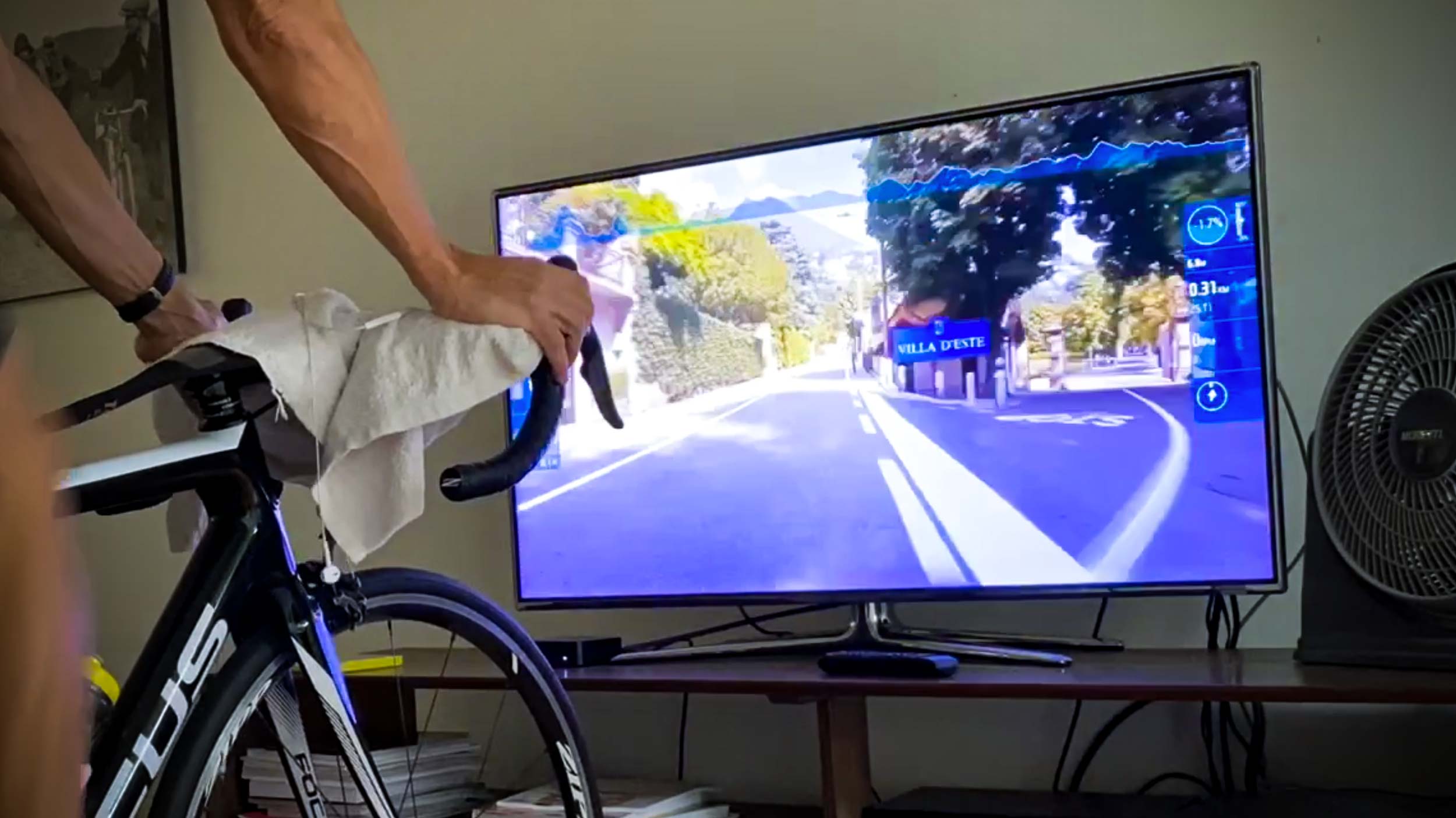 Sometimes I study the numbers on the right of screen: gradient, elevation gains, distance covered and distance to go… but I don’t have the heart rate straps (so BPM remains ‘0’ even though I know my ticker is still beating).

Sometimes I stare at my progress along the graphic of the profile of the selected ride that sits at the top of the screen. Hell, after only a few days, I now trust FulGaz enough to know that I can push that little bit harder near the top and even risk a pre-emptive gear change so that I’m ready for the descent.

Sometimes it’s the real-world image dominating the screen that captures my attention.

All that’s there if you need it, but sometimes the connection drops out or my mind wanders and I just zone out and listen to the music and hope that the next song on shuffle keeps me singing in my head. 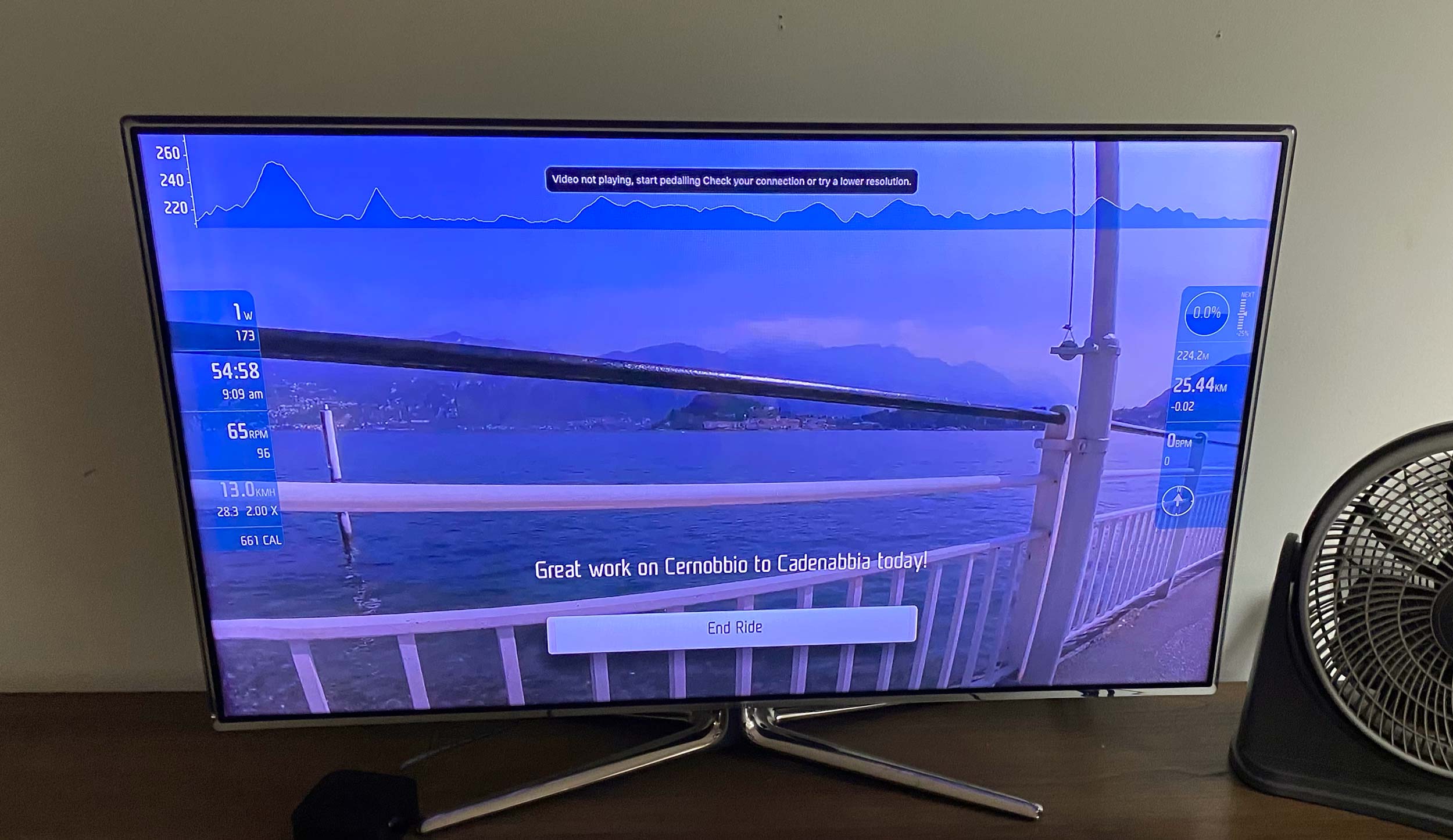 This morning it was a fun start as the image darted through the laneways of a town near Como, not far from where the press centre of Il Lombardia is usually located. There were streets I recognised and roads I’ve ridden years ago.

There was an annoying bus ahead of me for the first six kilometres… but the bloke who filmed the ride one bright sunny day in Italy eventually found a way around it – up on the footpath while the bus collected passengers – to some clear road ahead without too much traffic.

The fence on the right of the screen often blocked the true splendour of the view but occasionally it would open up to reveal the beautiful blue of the lake or offer glimpses of the Italy we know so well from tourist brochures and postcards.

There were a couple of other riders to follow for some of the 25km and regular reminders that, although Italians embrace cycling, traffic can be a curse in this part of the world… even though it doesn’t slow the progression of what’s seen on the screen.

There was a moment towards the end of the ride when it seemed a bus had squished an oncoming car into the stone wall on the other side of the road, but the blockage cleared and I kept riding, onwards to Cadenabbia.

You notice the little things and don’t need to be glued to the data.

There was a sense of relief when, on the approach to Brienno near the halfway mark, the rider veers right, onto a new stretch of road that leads down to the lake, rather than opting for the ugly tunnel on the well-used SS340.

There are undulations but never a brutal gradient. You get enough climbing to feel like you’ve had a workout but not so much that you blank out and miss all the fun distractions like the lady, with 1.6km to go, who is taking a selfie on the footpath oblivious to the fact that she’ll be seen by thousands of cyclists in the virtual world in months to come…

All things considered, there is a lot to take in and talk about even before I get into the details of the climbs or the effort required.

The indoor arrangement reflects many of the things that make cycling beautiful. It offers an opportunity for exercise and meditation and exploration and contemplation. And, above all, it gets my day off to a good start with a hint of escapism. Even if it’s only an hour a day, I’m already aware that it serves me well.

*Note: the ‘stair challenge’ began at the start of the month and it involves doing 100 laps (up and down) of a 16-step staircase in our house… each day, every day. The intention is to (roughly) climb the equivalent of the stairwell of the Empire State Building each day of this bloody lockdown.