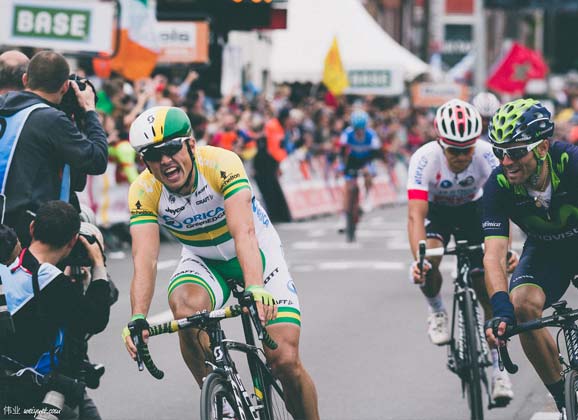 Gerrans wins! A gallery of the 100th Liège-Bastogne-Liège

Why was it beautiful? Because it happened as Simon Gerrans said it would. From the winner we saw a perfect race: patient, strong, reliable, savvy, well-supported… and even a touch of luck. Had it not been for the slip of a rear wheel on the final turn, the 100th edition of The Old Girl, La Doyenne, then Dan Martin would have been the champion again. The Irishman had the title of Liège-Bastogne-Liège in his sight and then it all came crashing down for him. And that’s when the Australian champion jumped to the fore and onward to victory.

Without Peter Weening, it wouldn’t have ended this way. The Dutchman was responsible for the pursuit of two fugitives, Giampaolo Caruso and Domenico Pozzovivo, but he wasn’t riding for himself. On his wheel was a group of favourites… with former LBL winner Alejandro Valverde riding towards the back with a green-and-gold shadow on his wheel.

Around the final turn: Caruso seemed as though he may take a coup; Martin lost the title defence; Valverde knew he had the speed to win; Gerrans continues to show restraint; Pozzovivo faded into the colours of others as he move was soaked up… and the finishing line beckoned.

If Simon says he can, he often does. That’s how it’s been for the Australian championships, the Tour Down Under, the Jayco-Herald Sun Tour, stage wins of the Tour, Giro and Vuelta… that’s how it was for Milan-San Remo when his team claimed its first ‘Monument’. That’s how it was in Corsica last year at the Tour de France when he beat Peter Sagan. And Simon has been saying for years that he can win in the Ardennes. Now he has. Injury free, with support, and onward to Ans to finish the job.

Here is a collection of images from the final of the Spring Classics. Click on the photo of Simon Gerrans (below) to begin the slideshow…