Getting to know FulGaz: riding with Tsgabu Grmay in Ethiopia

Our relationship with smart trainers is only likely to get stronger in the coming months. After a long stint of resistance, it’s now time for a comeback to indoor cycling. This is my overview of an early experience with FulGaz… 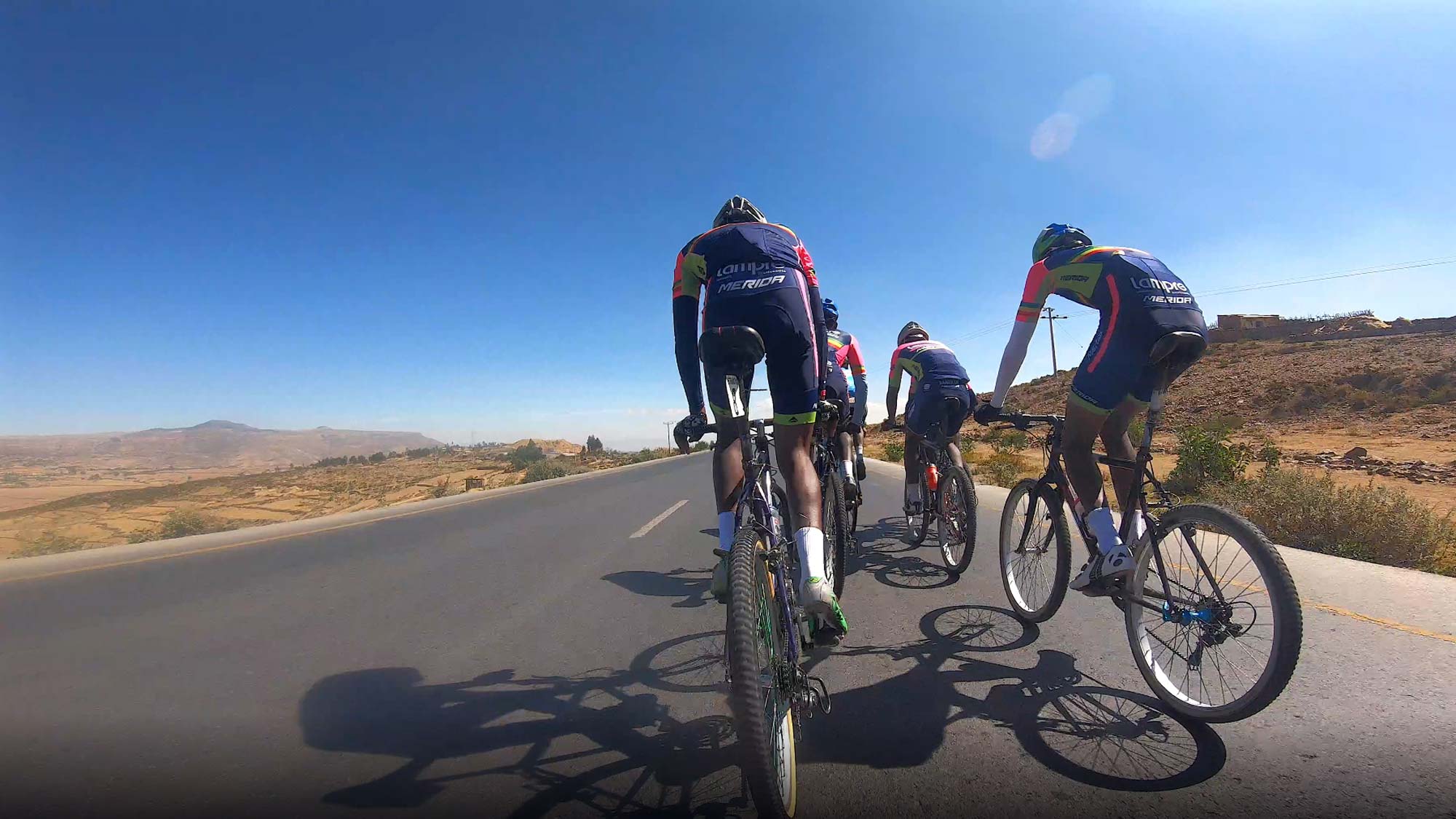 I’ve been told about it for years and have written about it a little in recent weeks but my first, personal experience with FulGaz has been a long time in coming.

I have always considered myself a cyclist. Bike riding has been a big part of my life. I’ve ridden in all kinds of conditions on all types of equipment but, given the choice between indoors or outdoors, I know which appeals more to me.

That said, I’m not new to smart trainers. We now have two in our house.

Upstairs, in the attic, is the original Wahoo Kickr that’s been in steady use by me and the kids (now 14 and nine) for around five years. It’s on this that I got my first taste of riding in the ‘virtual world’ (or whatever the correct expression is), but it wasn’t an easy process.

‘Nah, I’d rather ride my bike how I’ve always ridden my bike…’

That was me, despite all kinds of urging from all kinds of companies that have created platforms for people to expand their cycling repertoire, I’d regularly pass on each offer.

Reps would visit the office, bringing shiny new toys and highlight the benefits they offered. I’d listen and nod along to their explanations and, once in a while, jump on and sample what was being pitched.

‘Ah yes, I can see the benefits,’ I’d say. And then I’d happily wheel my bike outside and do my usual ride.

That seems like a long time ago now because, when I finally did take the back wheel off, login and watch the screen while I pedalled – without any sales rep watching on or offering instruction – it took only 30 minutes of proper riding to recognise the benefits.

As most of you know, there’s a great community out there. With a wealth of riding options and thousands of possible companions all riding together, there is banter and ‘Ride On’ encouragement and – particularly in 2020 – regular rides/races with pro cyclists being added to the platform. 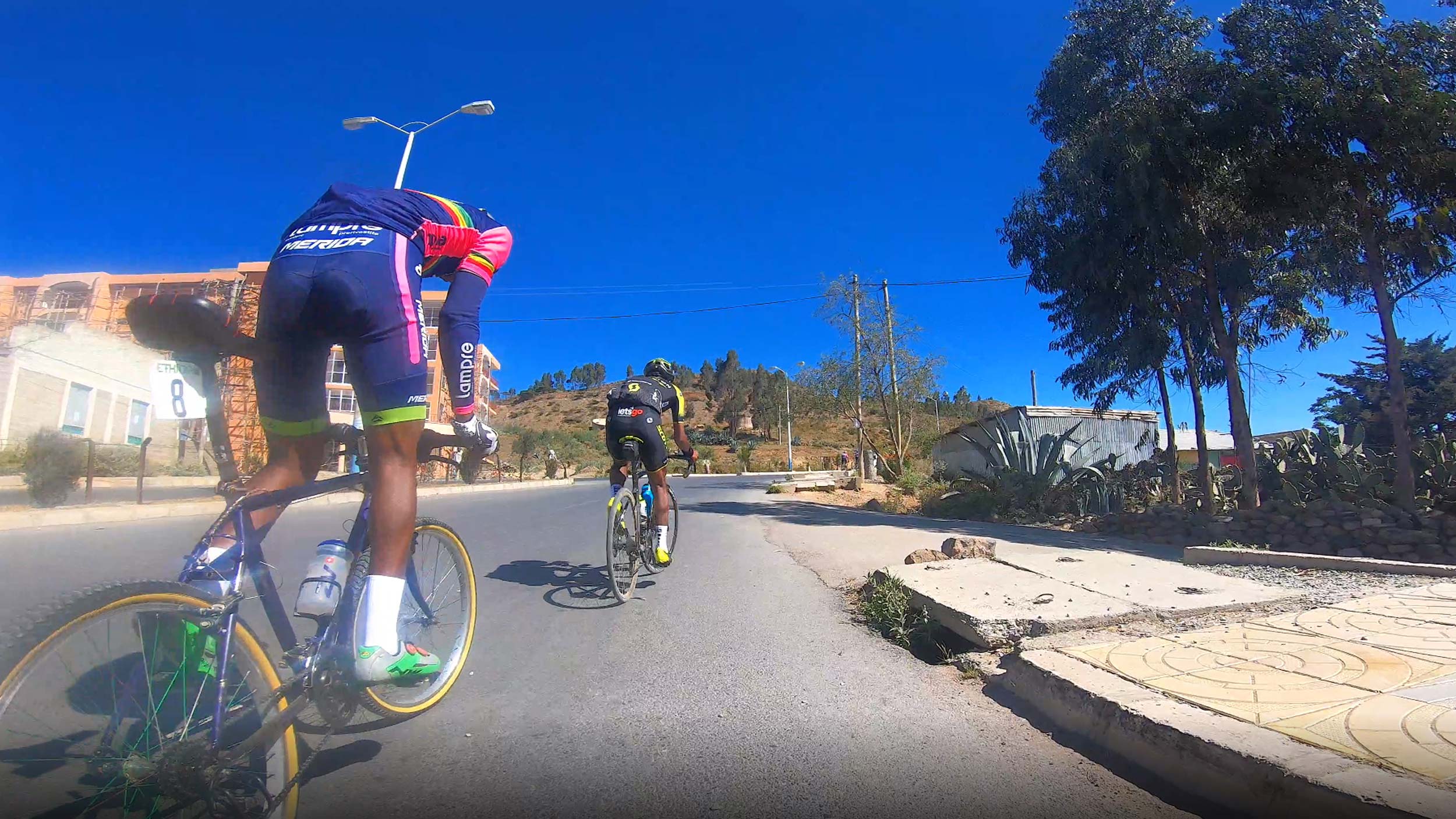 Unlike some other virtual cycling platforms, FulGaz features real-world imagery with video footage – often available in 4K – collected from around the world. Here, Tsgabu Grmay leads the way from Hagere Selam to Mekele.

As summer approached in my maiden season of indoor cycling, I started to worry about myself. The sun may have been shining, but my back wheel remained neglected and the bike was only removed from the Kickr if one of the kids wanted to use it instead of me.

Morning or evening, I’d find myself in front of the screen tapping out the kilometres.

As you’d probably know, it starts out relatively tame: 30 minutes, that’ll do. You go nowhere. You get hot. You get wet. There’s a puddle of sweat on the mat and a sense of satisfaction that surprises you. Then you unclip and eventually cool down.

With the towel wrapped around you to stave off any chill, you review the numbers – often with the flywheel still spinning from the final effort on the bike – and compare it with yesterday and the day before that.

Lo, your fitness improves. And it happens quickly.

Half an hour quickly turns to 45 minutes and, teased and/or tempted by the array of data, you commit to doing a little more each day.

And on it goes.

Despite my early resistance, I understood the appeal. And I rode indoors through to summer and beyond.

When I did go outdoors again, it was another revelation. Imagine, if you improve your fitness, you can go further faster…! Gosh. (Or is that, ‘Duh’?)

In the end, what stopped me riding indoors was the reality that it was becoming easier to ride outside. One benefit of the Kickr sessions was that the rear-wheel-on rides were now easier, longer, more satisfying. And so, I suspended my Zwift account and haven’t looked back.

Note: the kids still love their Zwift sessions. In January, the 14-year-old set himself a daily challenge and it included a lotof riding. I’m not going to bore you with proud-dad-commentary, but let’s just say my eldest easily puts me to shame if we ever make comparisons of our riding time, kilometres covered, metres climbed… even watts-per-kilo output. (That’s another topic for another time.)

Downstairs in the home office was a box that had been opened a few months ago with a Tacx Neo 2 Smart trainer inside. It had been pulled out, photographed and toyed with over summer. Neat, functional, quiet, cool… but it remained idle for some time after that initial review.

Outdoors was calling me and the lure of time on the MTB trails and roads around Sydney was easier to respond to than the blue lights of the Neo 2.

We limit our movement now but still need our exercise. And that’s why the Tacx got a second beginning. It’s not only out of the box again now, it’s part of the furniture – the living room furniture!

This isn’t a tech review with all the explanations that others do so well, with details of connectivity or power output or Bluetooth vs Ant+ or the myriad other discussion points that come up when we consider indoor cycling in the modern world. This is simply my story of a return to riding inside because, quite frankly, it’s a safe alternative to riding through a cloud of coronavirus cough. 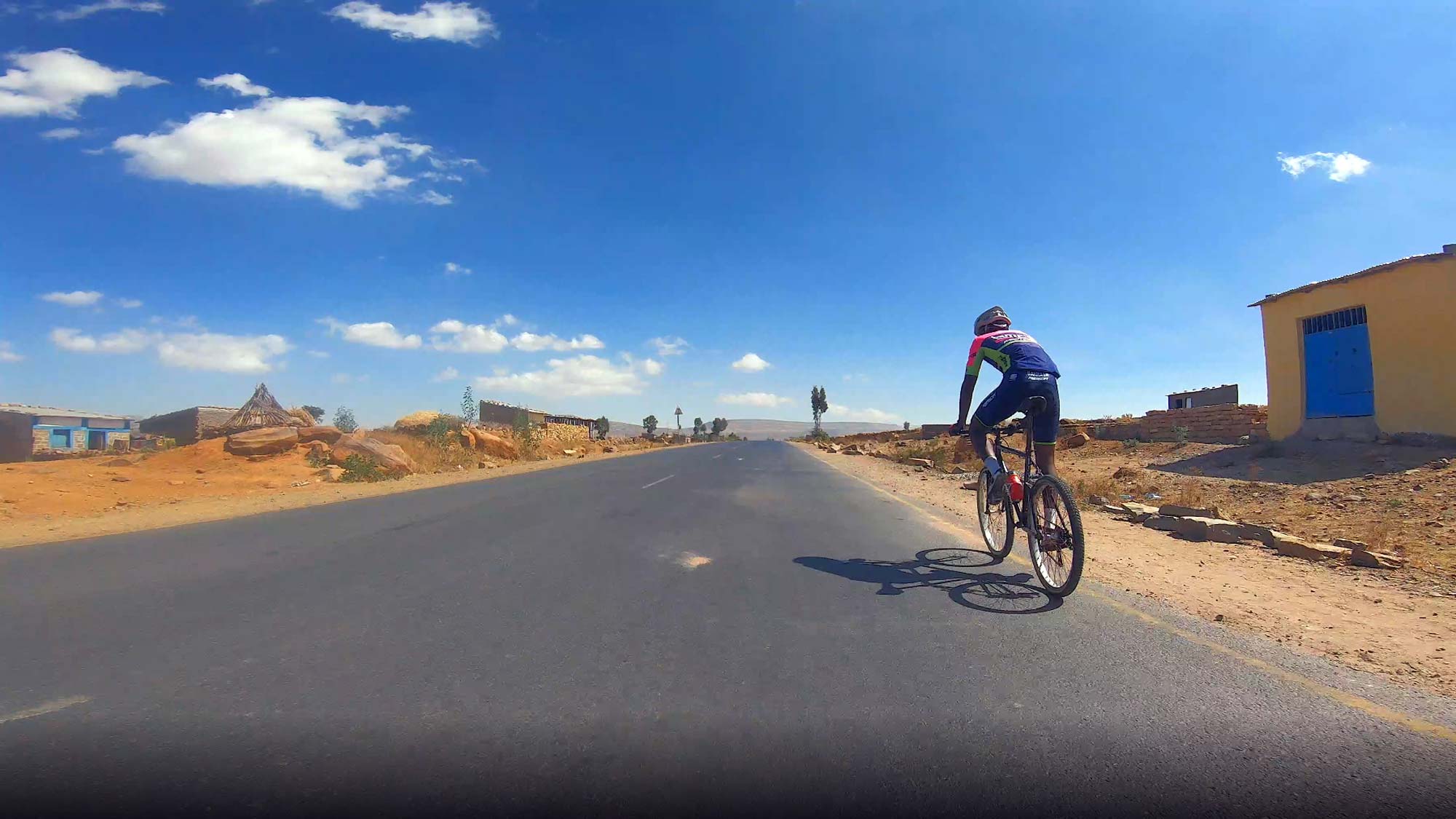 A few weeks ago, when it was becoming apparent that we’d be spending a lot more time inside our homes, FulGaz’s marketing bloke in Melbourne, Tom Reynolds, called with an update about the Australian company’s initiatives early in 2020.

Within a week of the PM’s announcement of new laws about social distancing and the need for school closures and significantly limiting movement options, FulGaz had established the foundations of the ‘Tour of Europe’ – a seven-stage race with rides in Belgium, Spain, Mallorca, Germany, Italy, Netherlands and France.

There’d be a timing structure for men and women (with intentions to extend to age-group categories), a GC result, and as much data as could possibly be collected.

I’ve reported on the creation of the Tour of Europe but not sampled it myself. (It was my intention to join in the racing but, alas, I didn’t get around to it.)

Still, FulGaz got plenty of entries and the event prompted others to sample this virtual riding platform for the first time.

The Tour of Europe was created in a little more than a week. FulGaz’s founder and CEO, Mike Clucas, admits that there were some tech issues that needed to be smoothed out but, on the whole, it provided a catalyst to try something different.

Clucas and co also realised that, with lockdowns imposed all over the world, there’d likely be a growing market… but also considerations about budgets. At the end of March 2020, FulGaz’s free two-week trial period was extended to four weeks.

– Enter the promo code: ridewithride and, ta dah… you have double the free access. – 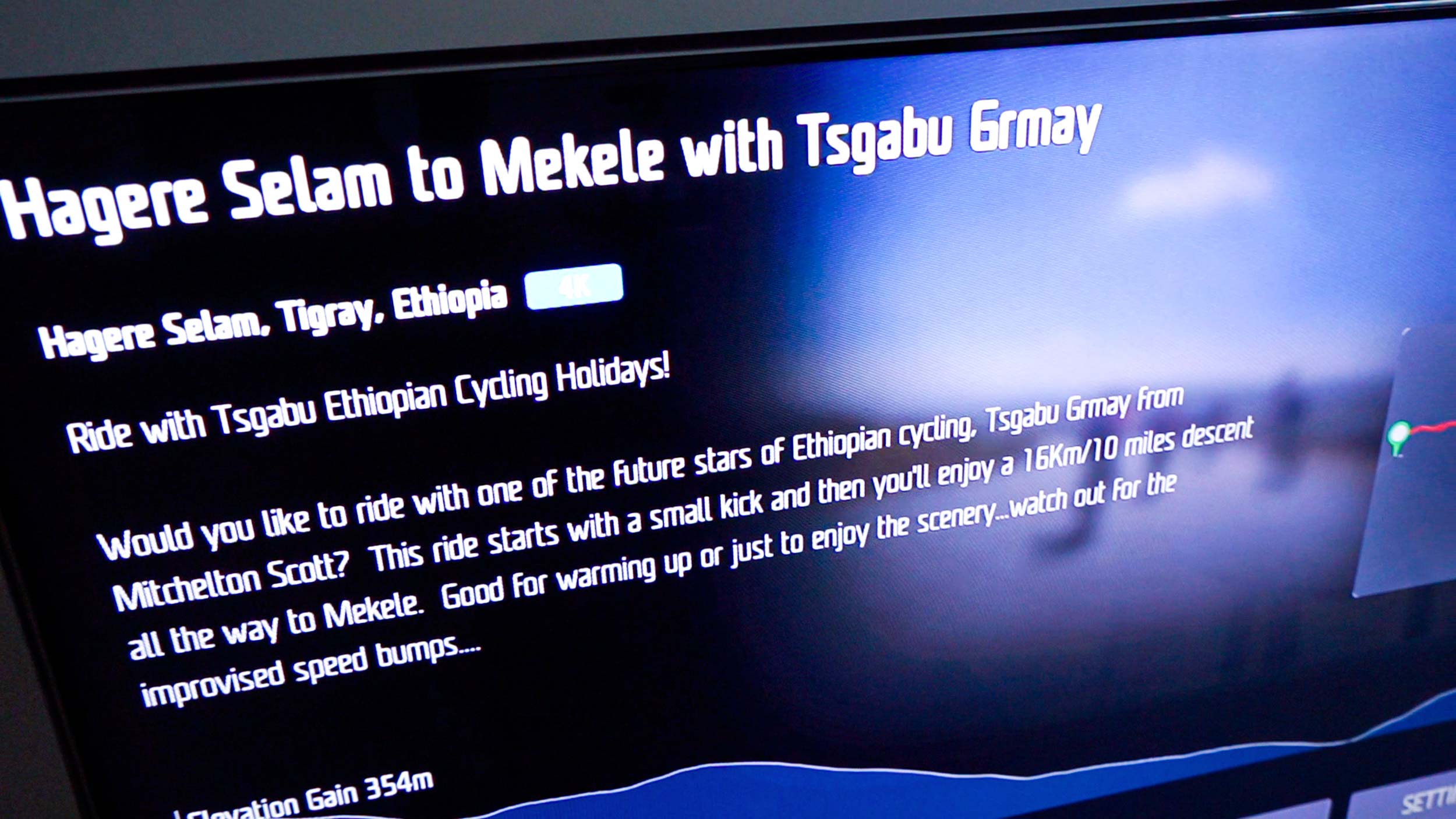 Morning ride in Ethiopia… while in Sydney

Eventually, inevitably, it came time to try a different indoor cycling platform. After setting up the Neo (again) and getting a brief taste of FulGaz yesterday, my time to finally respond to the regular requests to sample FulGaz came.

Yesterday I did a 20km session around a lake in Bavaria. It was flat and there were regular instructions issued on the screen: ‘increase cadence’, ‘look out for the truck’, ‘get ready for the little climb’… etc.

That was my first FulGaz experience, but I was distracted. I was documenting the process, but it gave me an opportunity to get a better understanding of the differences from my previous indoor cycling sessions.

There is a vast array of options and it’s highly advisable to invest time in going through the settings panel before putting on your cycling kit. That’s what I did on Thursday morning but on Friday I’d ride…!

Tom Reynolds has recommended a course in Ethiopia more than once. “It’s great,” he said again earlier this week. “It’s a ride with Tsgabu Grmay and a bunch of locals on their mountain bikes.

“The scenery is different to what you’d be used to and it’s cool to see Grmay and his training mates on their terrain, in their domain.”

And so, it was the first ride option that I searched for. (Note: there is a selection of over 900 on offer!)

Another day at home in Sydney but squeezed in an hour of riding in Ethiopia before work.
The ‘Hagere Selam to Mekele with Tsgabu Grmay’ ride on @FulGazApp was recommended… for good reason – a cool ride with a good group.

‘Hagere Selam to Mekele with Tsgabu Grmay’ is what I did for an hour this morning.

What a joy. What a way to start the day!

It starts steep, a gradient over 10 percent for a little over a kilometre… and then it’s a rollicking good time all the way to Mekele, often downhill, always at a solid tempo, and with Tsgabu and his cohort entertaining me in 4K definition.

They hop the speed bumps, point out trucks, get in aero tucks, and pedal with such fury that it’s easy to forget that many of them are on fat-tyred, heavy mountain bikes… their pace is impressive but you also get a taste of the cultural differences between, in this instance, Australia and Ethiopia.

When they pass a road-kill animal, for example, you see the Ethiopians make the sign of the cross.

When there’s a shepherd on the side of the road, they wave, and he responds.

When there’s a descent, they drop it down to their biggest gear and tuck onto the top tube and eke out as much free speed as they can get.

When there’s a truck stopped at a random stretch of road, they signal that it’s okay to pass and we continue on our merry way to Mekele. 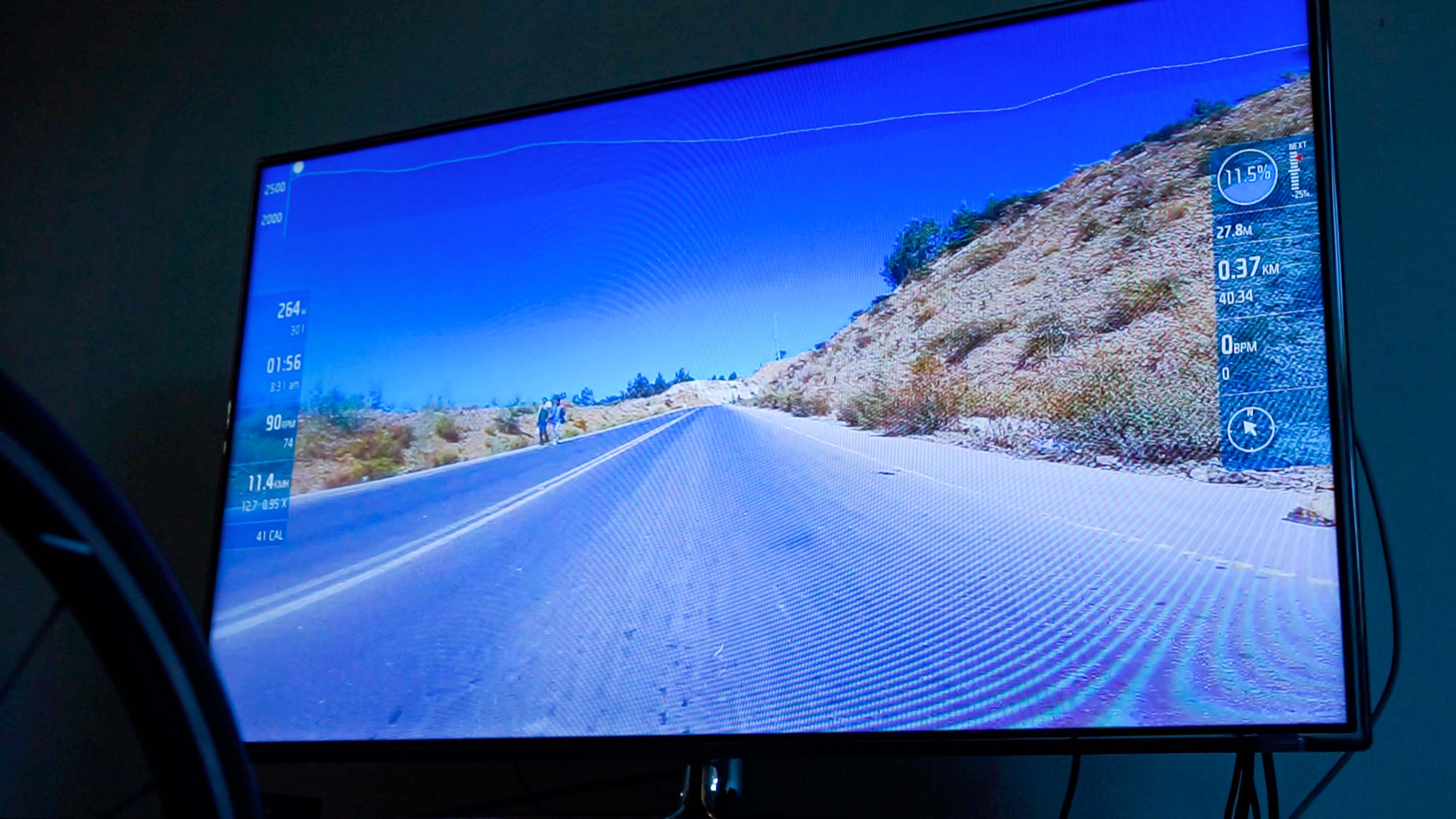 It’s a 40km ride with 354 metres of climbing (and a lot of fast downhill). It took Tsgabu Grmay and his mates one hour and 11 minutes.

I’d allocated an hour for my morning ride and, around the time that the kids logged on to Google classroom, the connection dropped out and the 4K image froze a few times… but I kept pedalling, the Neo kept sending power data to the TV screen (via an Apple TV connection).

When the school files were retrieved, the NBN kicked in again and I was on the wheels of my Ethiopian riding companions once more.

I write all this in the hour that followed my adventure in Africa. I’m out of my lycra and the Neo is back in the corner of the living room… but not for long. There’s someone else in the family who has got her eye on the smart trainer. She also got her first taste of FulGaz yesterday, riding along a river in Japan not far from where she once lived.

Today, my wife tells me, she’s going to find somewhere she’s never been before and go exploring.

Cycling is certainly different now and it’s not how I ever imagined I’d be riding my bike when I first got into this caper but FulGaz has opened my eyes to a whole new spectrum of scenes and riding options.

I’m inside when I’d rather be outside but that doesn’t mean I’m not exploring the world and getting fit… all before I sit down at the desk and consider where I’ll go next.