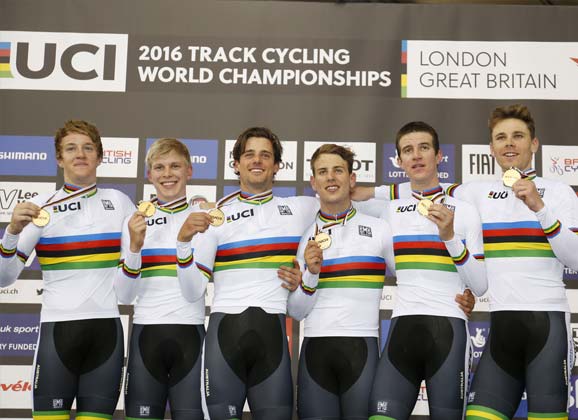 Many would say that the team pursuit is the blue ribband event of the track cycling program, but there’s always action at the world championships. The Australian team will certainly shout that the team pursuit is the most important event… at least after day two of the 2016 championships in London: Michael Hepburn, Sam Welshford, Miles Scotson and Callum Scotson posted a remarkable 3:52.727 to be the British team and take home the gold.

Here is the summary of events from day two at the championships. 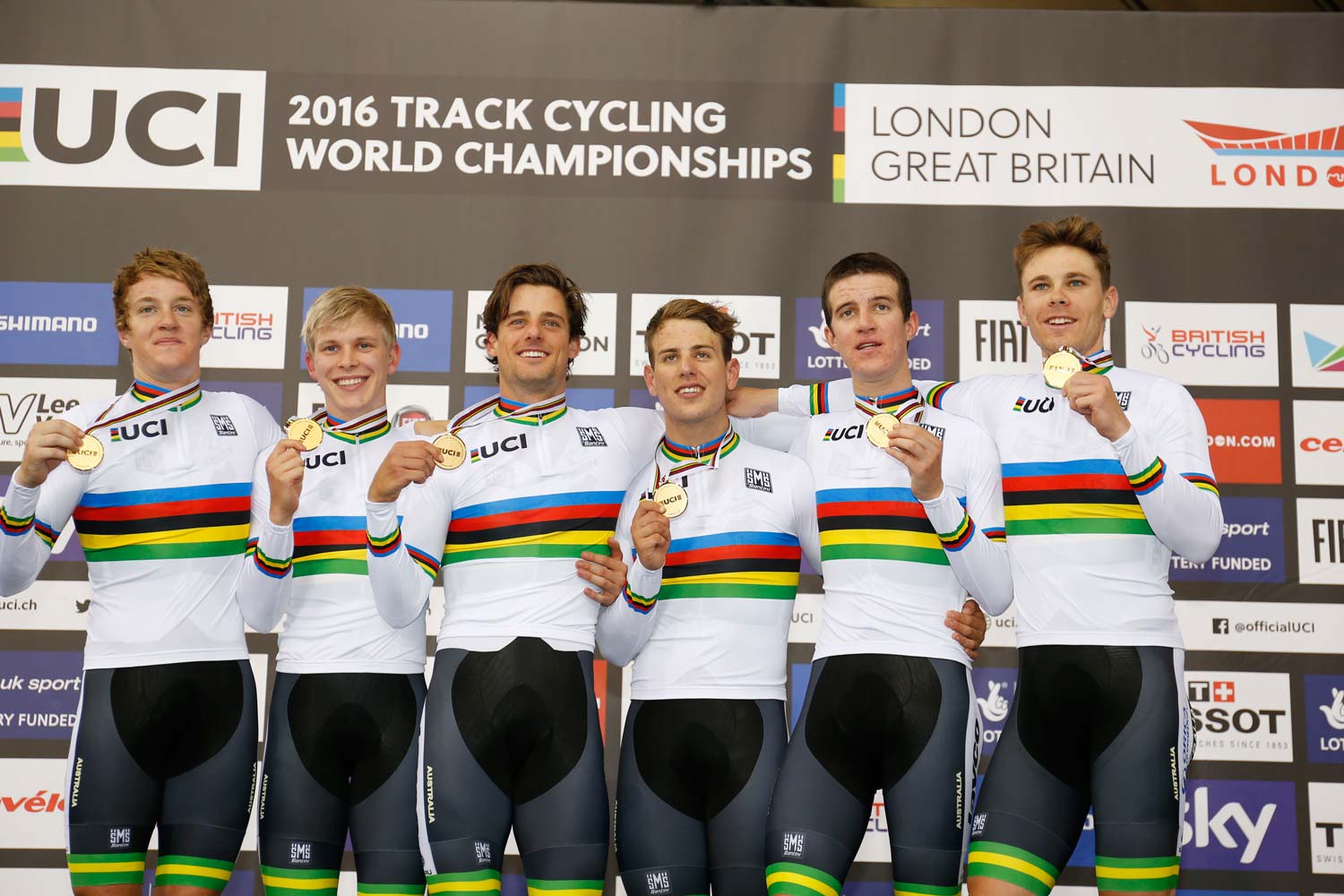 Lee Valley VeloPark, London: Australia’s men claimed track pursuit gold in the final event of the second day at the 2016 track world championships in front of a fevered London crowd.

In a repeat of the Olympic final held on the same boards three and a half years ago, Australia battled Great Britain after both teams won their respective first round match-ups.

And it was Australia who prevailed having built up a lead of over 0.6 seconds over the opening kilometre. It was a lead that steadied in the mid-part of the race but, as the team entered the final kilometre, the Brits started to edge back buoyed by a fantastic performance from Bradley Wiggins.

Both teams changed their line-ups for the final, with Jon Dibben and Ed Clancy stepping in for Steven Burke and Andy Tennant in the British four and Miles Scotson coming into the Australian team for Luke Davison. It was the first start of the championships for Clancy since returning from a back operation late last year.

In scenes reminiscent of the summer of 2012, the home crowd lifted the lid of the velodrome as the Brits came roaring back, snatching the lead with two and a half laps to go.

But, as the British team tired, the Australian quartet of Welsford, Hepburn and the Scotson brothers hit back on the final lap to claim the win in 3:52.727.

“Coming back into the program and seeing the boys develop, both on and off the bike over the past four or five months has been really satisfying for me,” said Michael Hepburn.

“These guys have done absolutely everything that Tim [Decker, Australia’s track endurance head coach] asked – that I’ve asked, that anybody has asked – from them… plus some. I take my hat off to them, against a GB quartet riding quick on home soil in an Olympic year, they just didn’t let it faze them.”

“If you look at the rides over the past couple of days they certainly have gone out a lot quicker over the first 2km than us but our strength was never blowing and then bringing it home.

“We executed our plan, stuck to our plan and rode the times that we wanted to ride.

“Wiggins has showed that he is stepping back on to the track with ease. He is one of the best team pursuiters in the world at the moment.

“But what really got us across the line tonight was six solid guys, no superheroes just a good solid team working together and getting the best out of each other.” 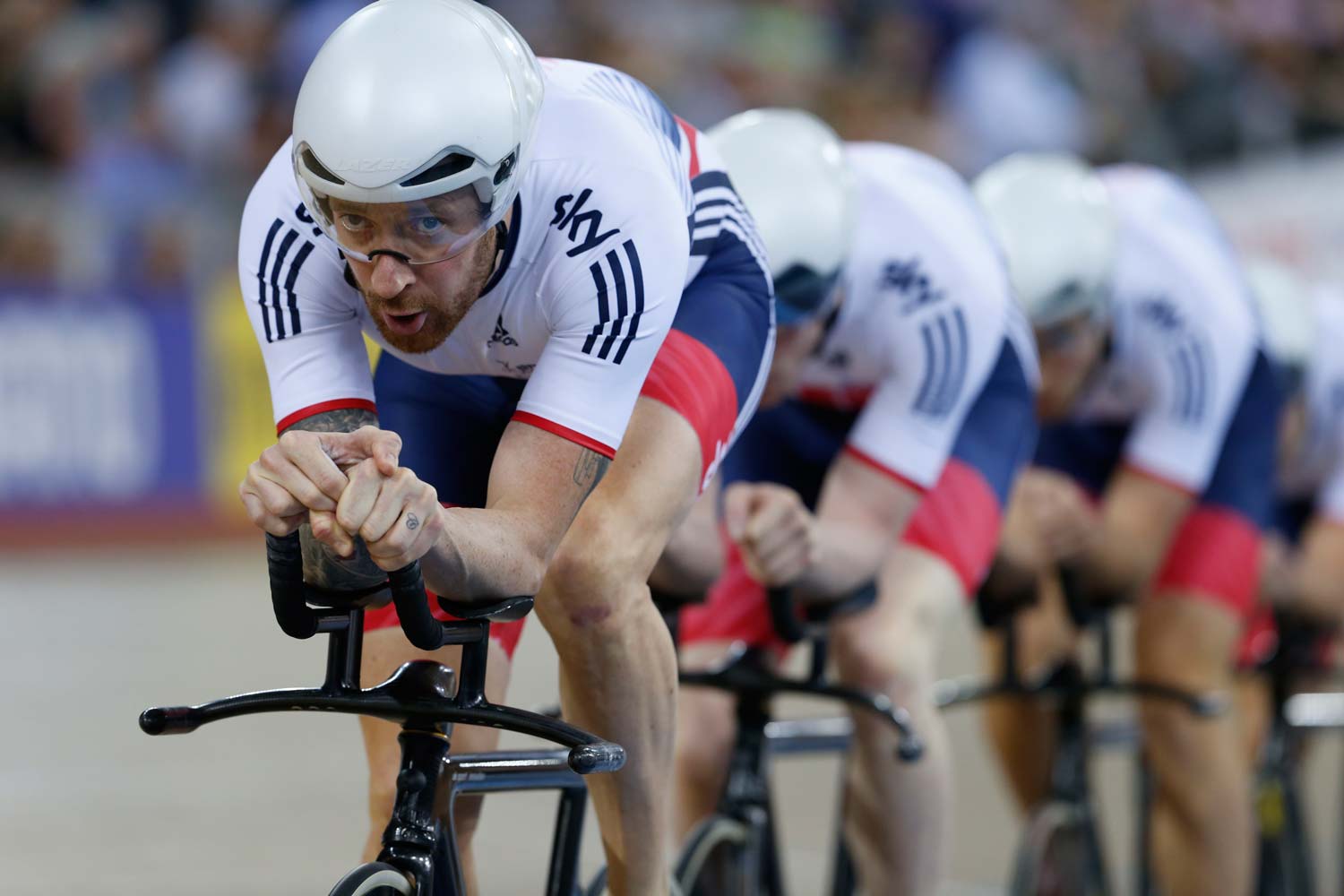 The British team meanwhile was left to ponder what had nearly been a phenomenal comeback in the final few laps.

“It was good to get back on the bike [after his back operation],” said Clancy. “It was a strange place to start to be honest… in the finals of the worlds. So it was a little bit in at the deep end.

“We rode well, we’re not far off. I just couldn’t hold on to Brad on the last lap. I did a good start and a good middle section, I just didn’t expect that last turn… I just came up a little bit short and was left hanging a bit.” 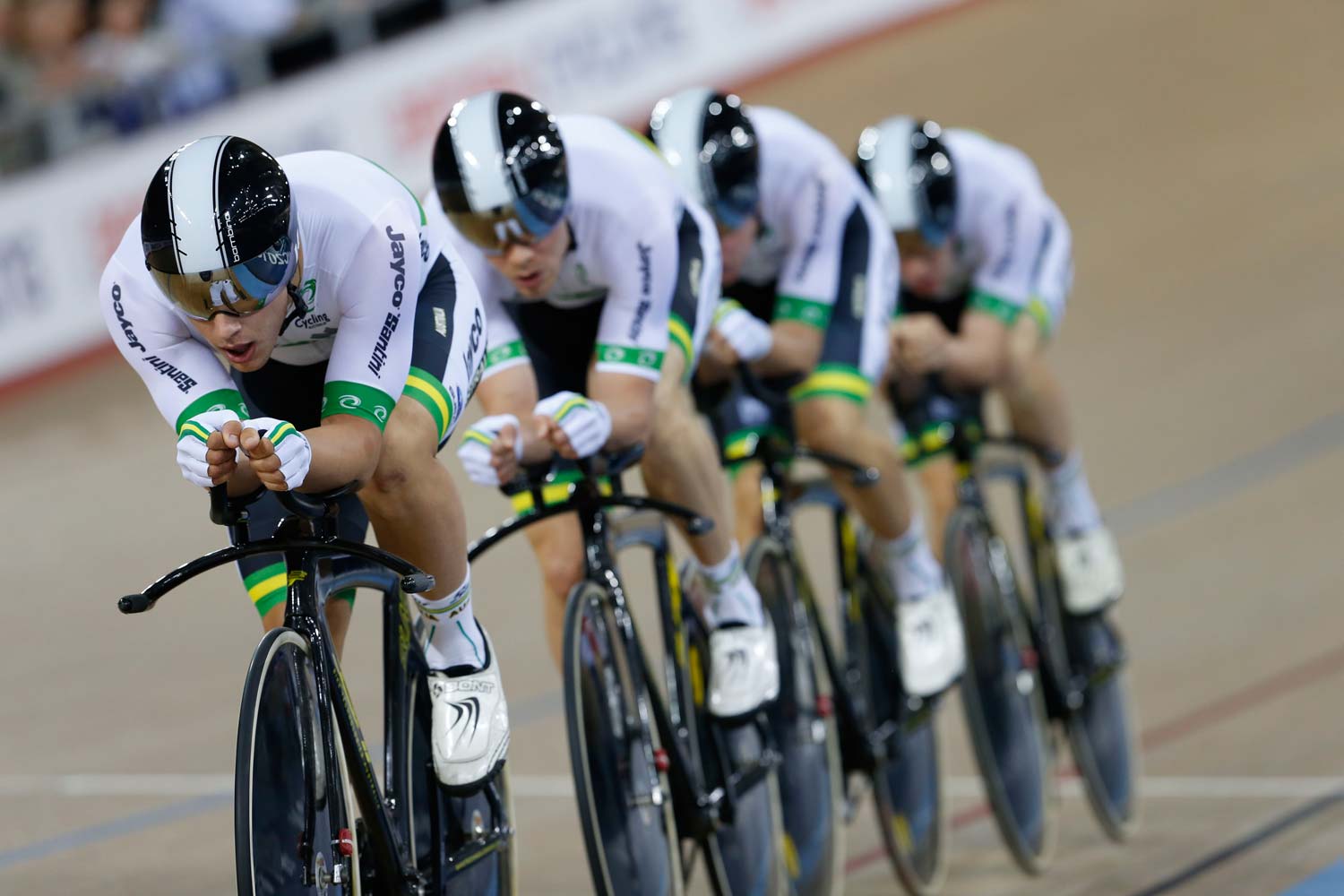 Elsewhere, Anna Meares was looking to claim a fourth world championship keirin but missed out to the 2014 champion Kristina Vogel of Germany. Vogel led from two laps out and while Meares tried to come around her on the outside in the closing moments, Vogel held on to win by a bike length. Great Britain’s Becky James took the bronze.

“I know people will say its silver not gold but I’m looking at my processes and the way I move and the decisions I make and how I rode the race, and I’m really pleased with that, considering we’ve come into this competition targeting Rio particularly.”

“I wasn’t actually feeling that good,” said Trott afterwards. “I thought I’m not going to chase people back to the group. I dug in a little bit and thought no I’d let everybody else work.

“There were a lot of people away but they weren’t really working together so I did kind of know it was going to come back [together]. When it did come back had the perfect lead out from [Canada’s] Stephanie Roorda and that was that.”

In the men’s Kilo TT, Germany’s Joachim Eilers took the rainbow jersey over the Netherlands’ Theo Bos who was over 0.3 seconds back. France’s Quentin Lafargue finished third. The result ended a three year dominance of the French who had claimed the past three world championship titles in the discipline.

Earlier the crowd at the velodrome was left stunned during qualification for the women’s team pursuit when Great Britain’s attempt to make the gold medal ride disintegrated with 750m to go.

Laura Trott and Elinor Barker got separated from Joanna Rowsell-Shand and Ciara Horne as home hopes for a return to gold-winning ways for the team were left in tatters.

Despite the split the team still recorded the fifth fastest time of the day, ensuring that they remain in the mix for bronze.

The fastest time was set by the USA who blew everyone else away, posting 4:16.180, over four seconds faster than second placed Canada who just edged New Zealand into second. The USA’s time set a national record, beating their previous best by an incredible five seconds.

Australia’s quartet of Annette Edmondson, Georgia Baker, Ashlee Ankudinoff and Amy Cure recorded the fourth best time. It means they will ride off against the USA for a place in the gold medal race on Friday afternoon (GMT).

“To be honest we’re a bit disappointed with the time,” said Cure afterwards. “With our preparation and everything we know we’re capable of a much quicker time than that. Full credit to the Americans out there, they rode awesome and we just got beaten by a better team in the qualifying.”

While they only edged the Brits out of fourth place by 0.224 seconds, the Australians had ridden last raising the question of how much they had left in the tank.

“Starting last, that’s the best position to start off with, you know what all the teams have done in front of you,” said Cure.

“That always plays a massive role in whoever starts at the end. But full credit, we got beaten out there by a better team but we’re definitely going to be going back and analysing the race and looking at where we can improve and come back fighting.

As for the Brits, being out of the hunt for gold at the scene of their dominance a little under four years ago shocked the home crowd.

“It’s a disappointing performance, there’s no way of dressing that any differently,” GB’s coach co-ordinator Iain Dyer said afterwards. “What we have to do now is turn ourselves around and get ourselves back into the medal contention tomorrow. We can still ride for bronze. We’ve got to look at the data today and work out the best way to go forward from here.