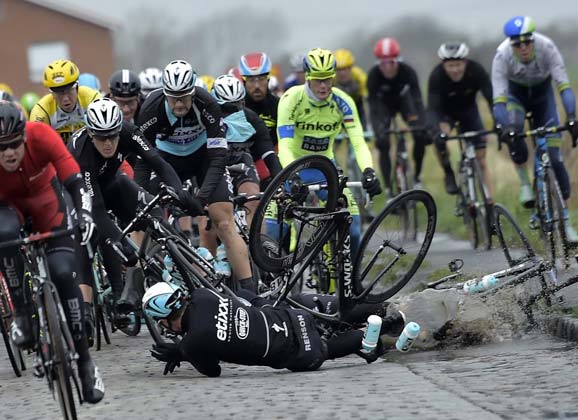 Harelbeke and Wevelgem: observations on equipment

With April just around the corner, it’s time for the peloton to take on the cobbled roads of Flanders. Last weekend saw Geraint Thomas win the title of the E3 Harelbeke and finish third in Gent-Wevelgem, which was won by the Italian veteran Luca Paolini in horrendous conditions. The champions crashed, as did many others who have earned their reputation in the one-day Classics – including Fabian Cancellara who fractured two vertebrae in a crash on Friday. The Swiss ‘Spartacus’ will miss the major Classics in April but the 34-year-old vowed that he will continue racing once recuperation is complete…

There was plenty of racing elsewhere over the weekend, including the Volta a Catalunya (won by Richie Porte, who increased his lead in the WorldTour) and the Criterium International on the island of Corsica, where defending champion Jean-Christophe Peraud claimed the title once again… in this post, however, we take a look at some of the events in Belgium and consider the equipment used and the impact of the cobbles on the peloton’s choice of products.

Here is a compilation of comments after a quick viewing of some photos by Graham Watson.

(For a similar overview of equipment from Milan-San Remo, see our post from last week.)

Paolini and his pistol grip… 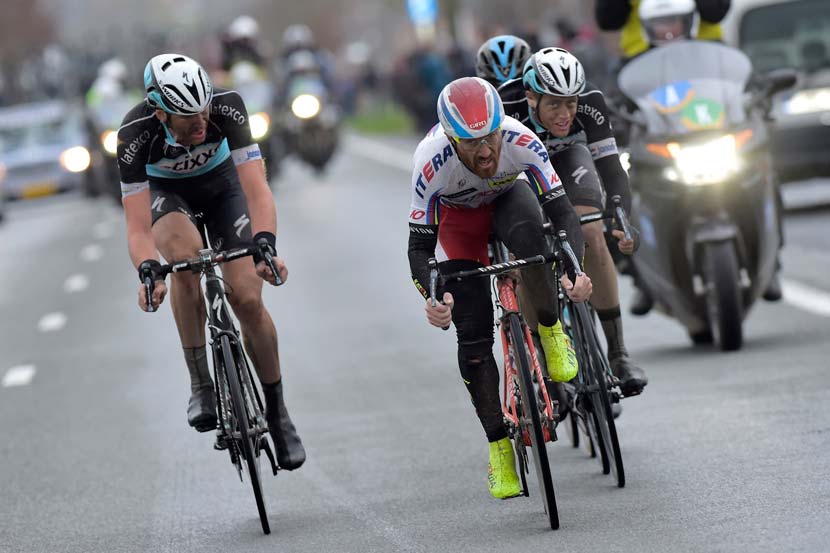 The winner of Gent-Wevelgem, Luca Paolini, is Assos’ sunglasses ambassador in the pro peloton. He’s also a hardman who can come back from crashes to win a Classic in fine style. Scroll down to see how he earned the holes in his leg warmers but another topic raised by this photo is the position of his levers… set ’em up high, he seems to have told his mechanics. It’s the first time we’ve seen this in the bunch quite like this since a certain Texan stopped riding Shimano (or racing all together).

PS. At the launch of Di2 in 2008, Shimano told RIDE that the ideal position is for the hoods to be parallel to the ground…

Gent-Wevelgem: Blowing in the wind! 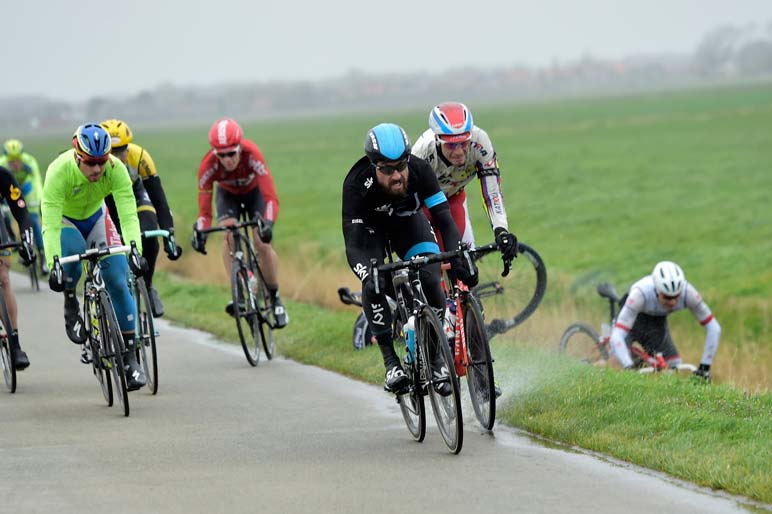 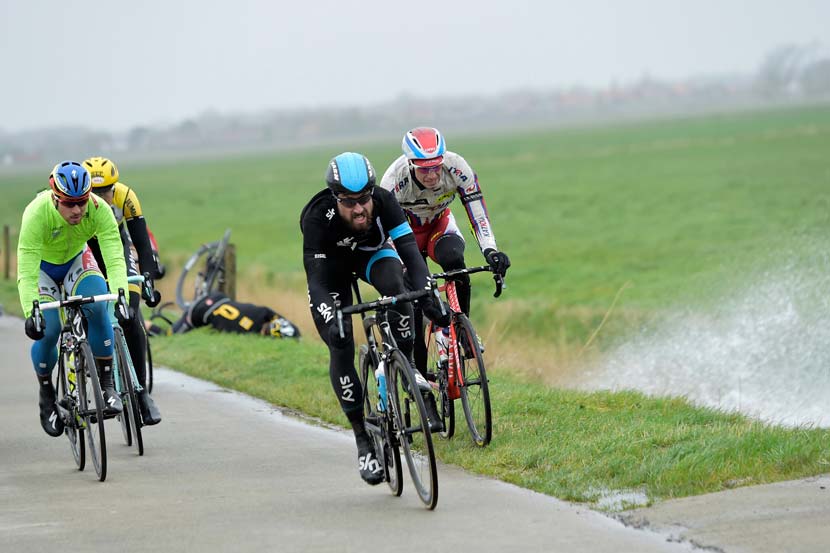 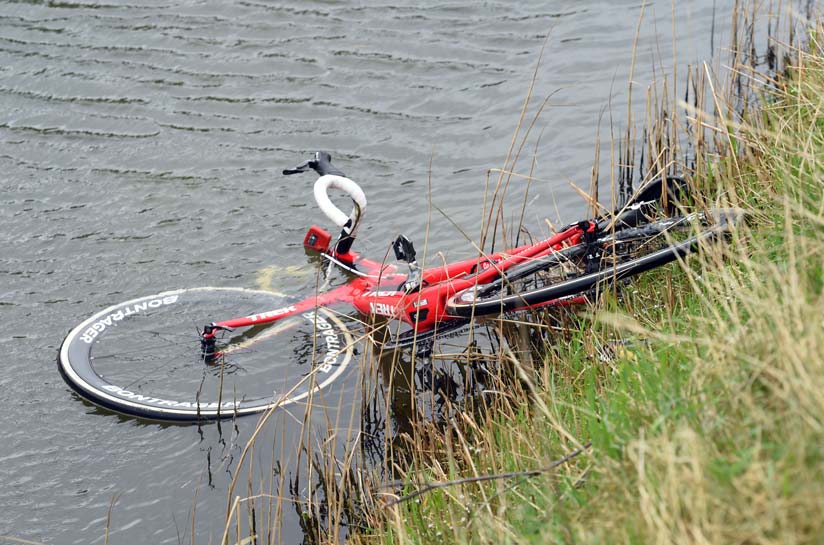 Steegmans… into the drink. The wind would take its toll on Sunday. Riders battled against the conditions in horrendous conditions in Gent-Wevelgem including this incident that saw Geert Steegmans blown off the road and his bike falling into a canal. Note the MTN-Qhubeka rider also crashing in the incident… according to the team report filed later: “In a weather affected and dangerous race Edvald [Boasson Hagen] was involved in a crash. He made impact with a pole on the side of the road and has sustained a fracture of the outside portion of his right clavicle.”

RIDE: While you’ve got Gent-Wevelgem fresh in your mind. Tell me about the wind. It looked extraordinary in photos. What was it like to ride through?

Bernhard Eisel: “I mean, it was… the whole thing was just stupid …I honestly rode five riders off the road because I couldn’t hold my bike anymore and people just crashed everywhere. So I said, ‘Stuff that.’ I had a meeting and then we stopped the race – neutralised it.’

“Other teams came back – because I was in the first echelon – and we said, ‘We can’t race here.’ We neutralised it, not the commissaire – the race director – he said on TV he didn’t do anything. And then…”

So it was an accord in the peloton?

“Yes. Yeah. I made the call and all riders agreed on it. We can’t race like that. And then we rode easy and all the riders came back, who had been in the third or fourth echelon, and then we saw Quickstep going to the front and started riding. It was like, ‘What are you doing?’ The breakaway had three minutes. ‘Let’s go easy and we stay safe.’ And they just started speeding up, speeding up. And then we came around the next corner and crashed off. Six guys of Quickstep on the ground.

(More to come from an interview with Sky’s Austrian recruit…)

Gent-Wevelgem: crashing down on the cobbles 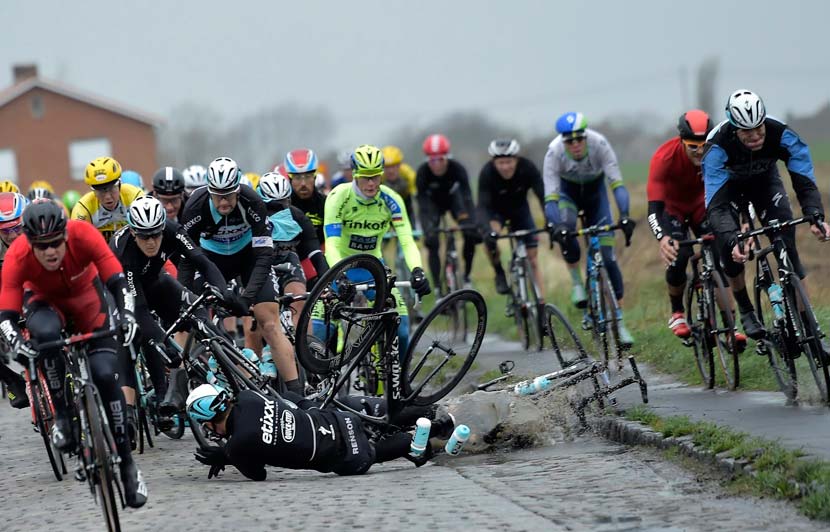 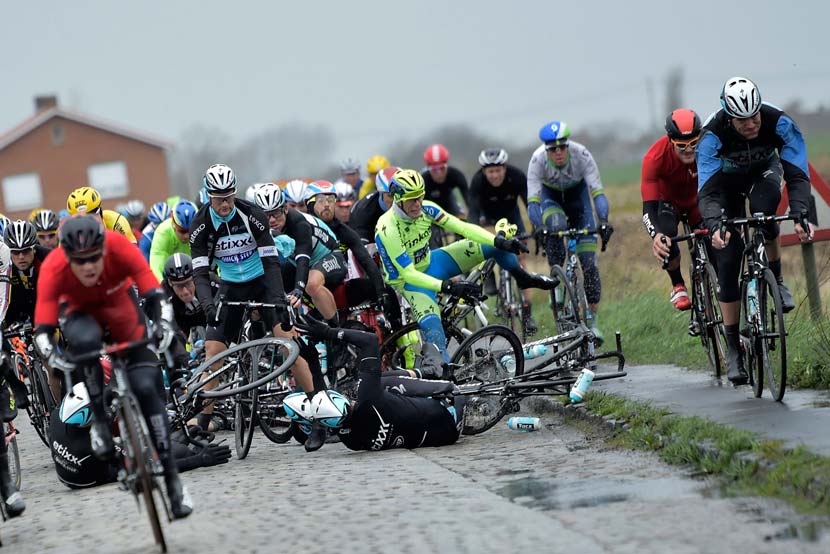 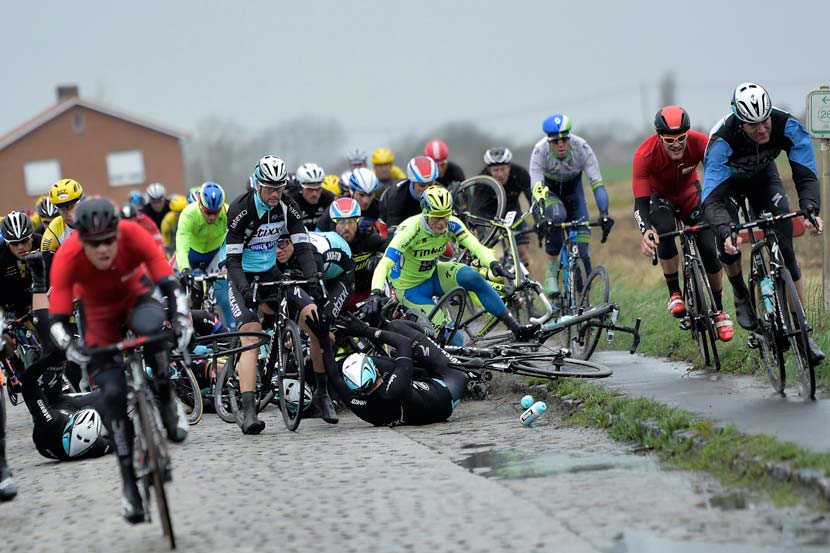 The sequence (above) tells the story: there may be safety in numbers when riders from one team surround each other but when one goes down… it’s doesn’t augur well. Numerous Etixx-Quickstep riders come tumbling down in Gent-Wevelgem in an incident that also involves the eventual winner, Luca Paolini who can be seen with his head aiming at the backside of Mark Cavendish in the final shot of the three… 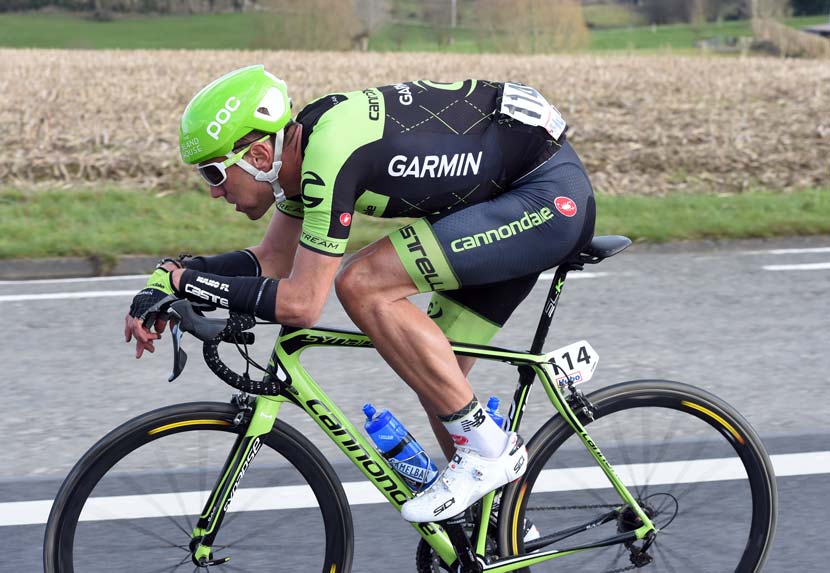 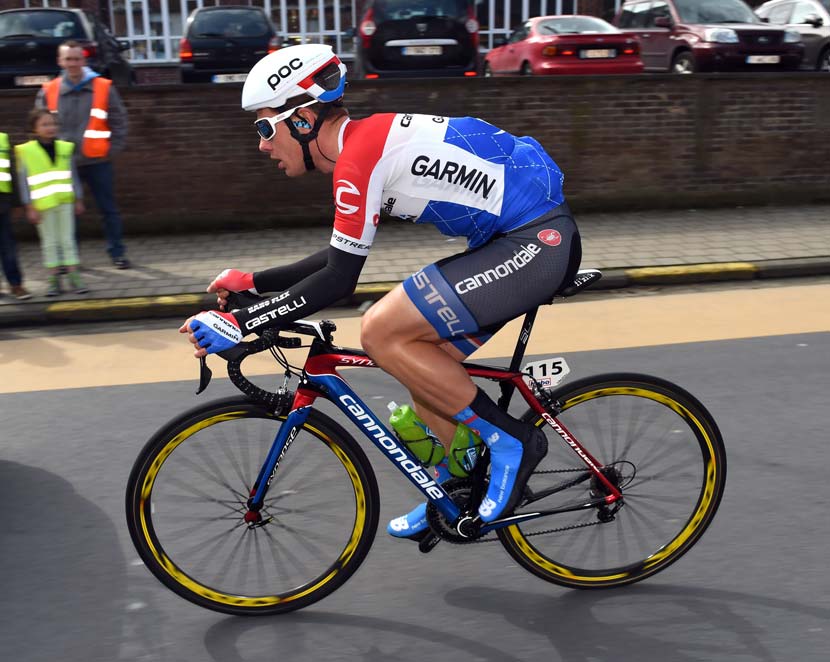 Riders from the Garmin-Cannondale team switched frames for the cobbled Classics: Kristjen Koren (top) and Sebastian Langeveld (above) swapping the SuperSix Evo for the more ‘compliant’ Synapse… complete with custom colours for the Dutch champion. 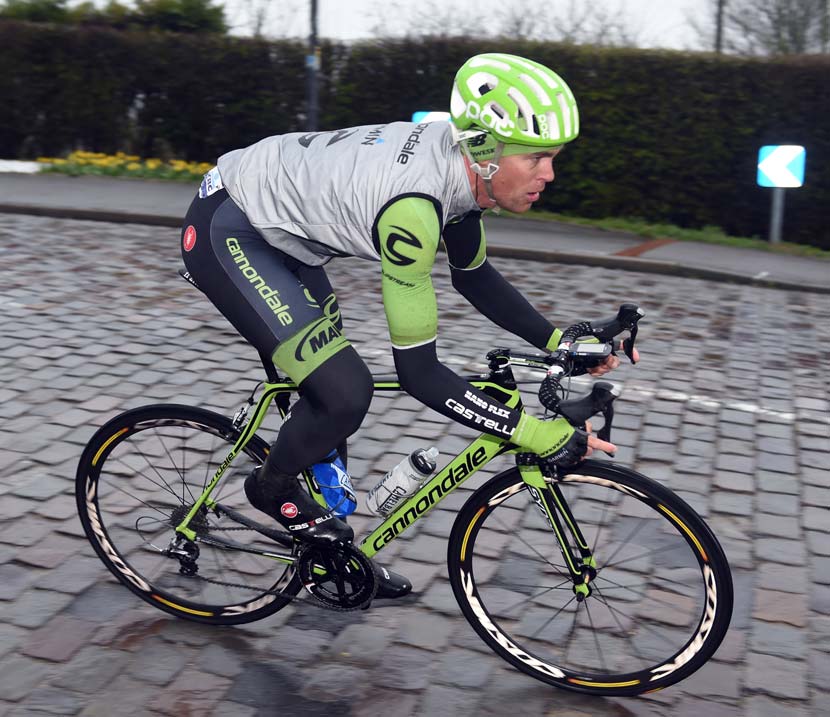 With the use of the Synapse frames, the height of the front of the frame goes up, but – in the case of Jack Bauer – the angle of the stem goes down… 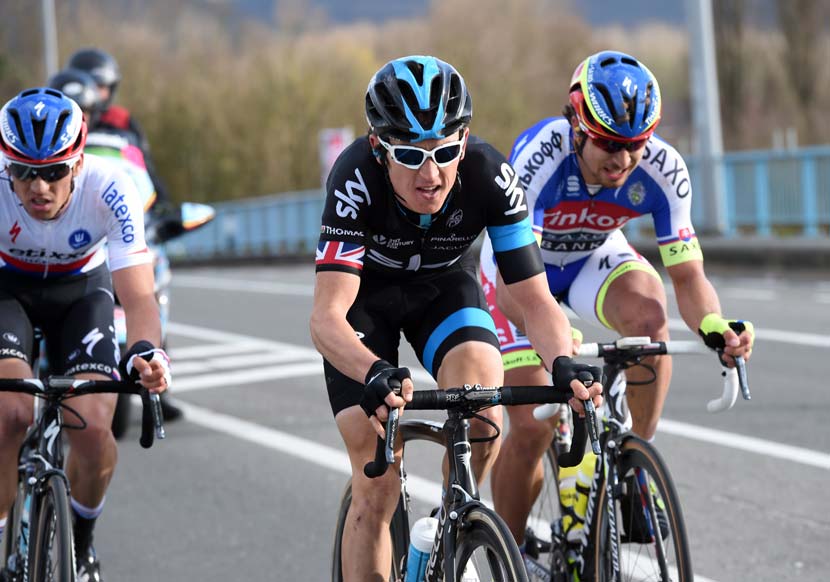 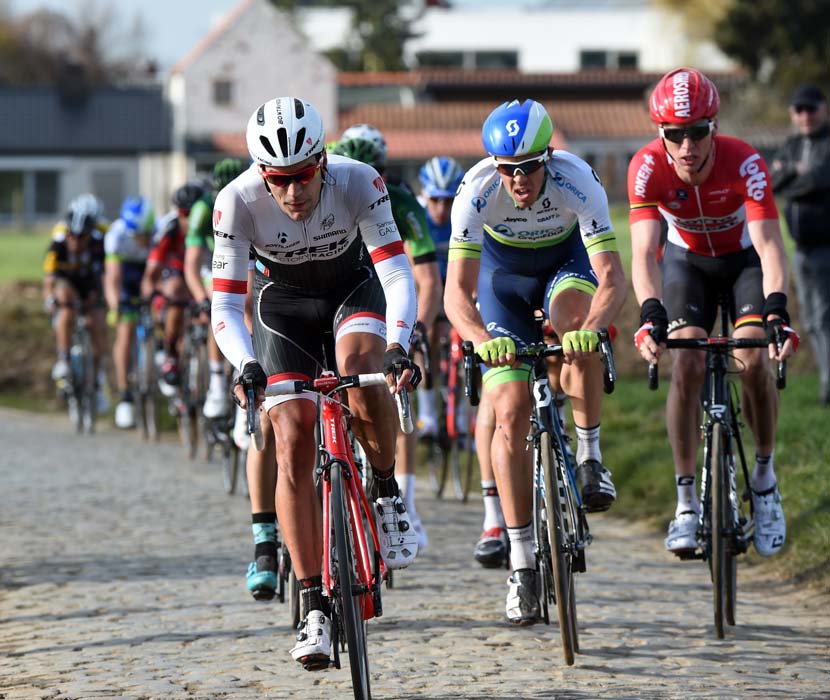 Earlier this year, there was a hint that there’d be changes to the Sky Pinarello bikes by the time that Sir Bradley Wiggins lines up for his attempt to win Paris-Roubaix… but there is little difference of note on the bike used by Geraint Thomas on the weekend. It seems that he does have a second strapping of handlebar tape on (top) and he’s got the FMB tyres that we’ve come to expect teams to use for the cobbled Classics but that’s about it…

Meanwhile, even for the rough roads, the trend of narrow or narrower bars continues to infiltrate the peloton as demonstrated by Steegmans, Hayman and Sieberg (above). Broad shoulders or not, the handlebar widths are shrinking even when there’s a need for extra control on the rough cobbles.

Designer footwear for the Classics 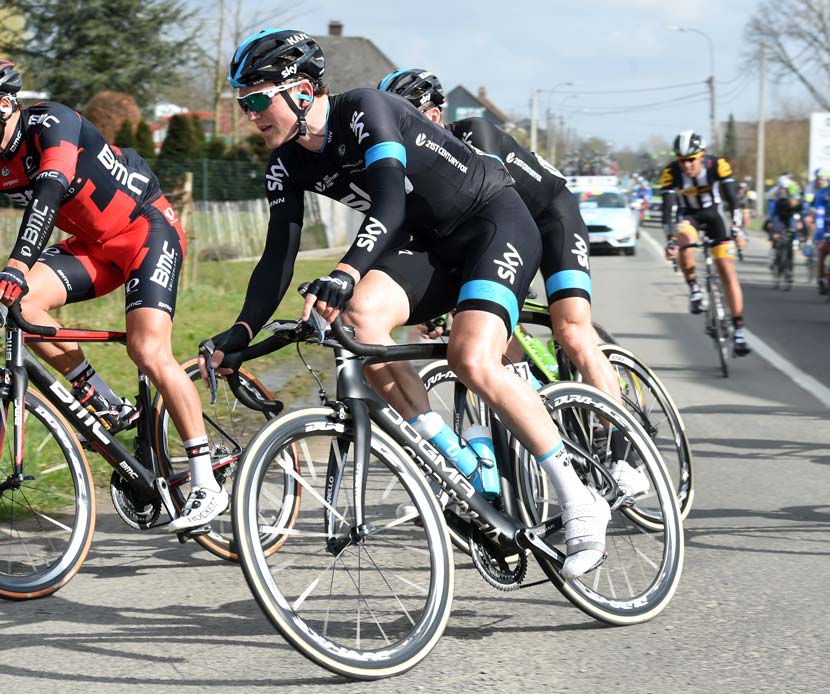 Just because they look stylish, it doesn’t mean they can’t be used in the rough races of a wet European Spring. Andrew Fenn opted for Rapha’s ‘Climbers’ shoes for E3 Harelbeke.

Socks… are getting shorter 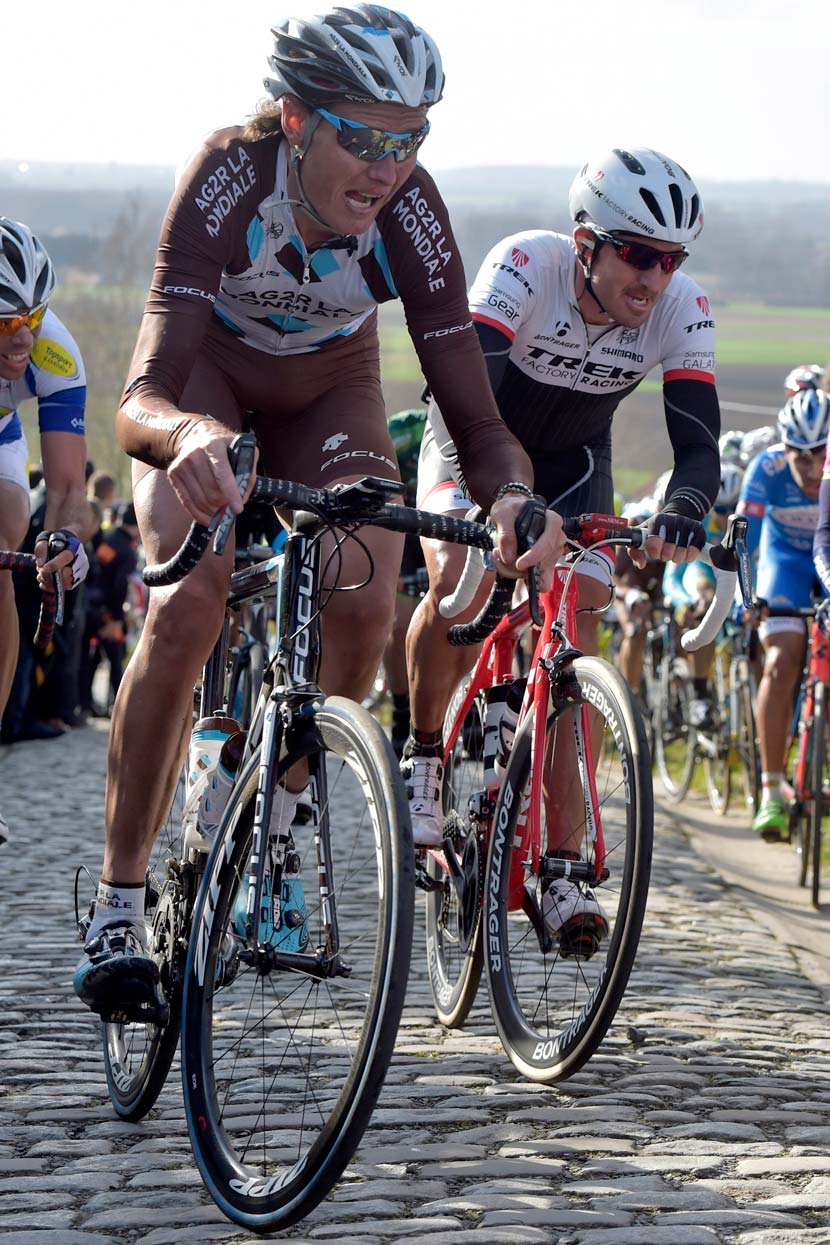 Okay, it may be a coincidence that both Johan Vansummeren and Yaroslav Popovych were photographed together wearing short sock option from the AG2R La Mondiale and Trek Factory Racing team, respectively… but there are signs that the long sock revolution is coming to an end (for some pro riders at least). It seems to have been started by Philippe Gilbert who opted to go low so that he could show off his rainbow striped ankle tattoo but now there are more in the bunch (including Sir Brad) cutting down the length. Yes, it’s a controversial topic and much more evidence is needed to state that the long days are gone but… 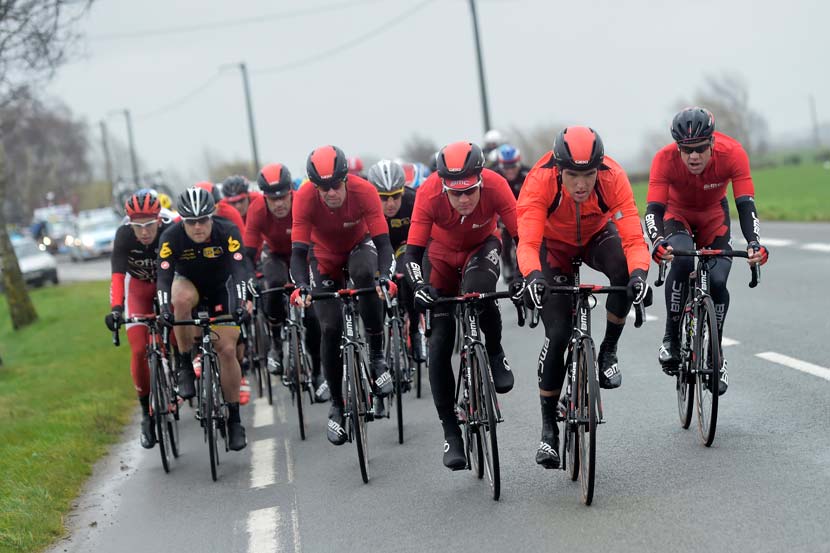 When inclement weather strikes, there’s a propensity to turn team colours to black as riders seek warmth over branding. BMC has recognised that identification of team-mates is still a necessary aspect of racing and thus issued red instead of black for the wet weather kit in 2015.

This is far from a definitive list of observations of trends and product use in the pro peloton but it’s a start of what we hope will be a regular on our site. What about you? Notice anything odd or different over the weekend. Be sure to share you thoughts either via email or by way of the many social media options… find us on Twitter and Instagram – @ridemediaHQ, or on Facebook.com/RideCyclingReview