Headcrack: an Australian connection with the development of Tadej Pogacar

There’s an Australian connection to Tadej Pogacar that is part of a much larger story. Tim Guy explains his links with the cycling star and why a small Australian mental health program was part of the Slovenian rider’s development. 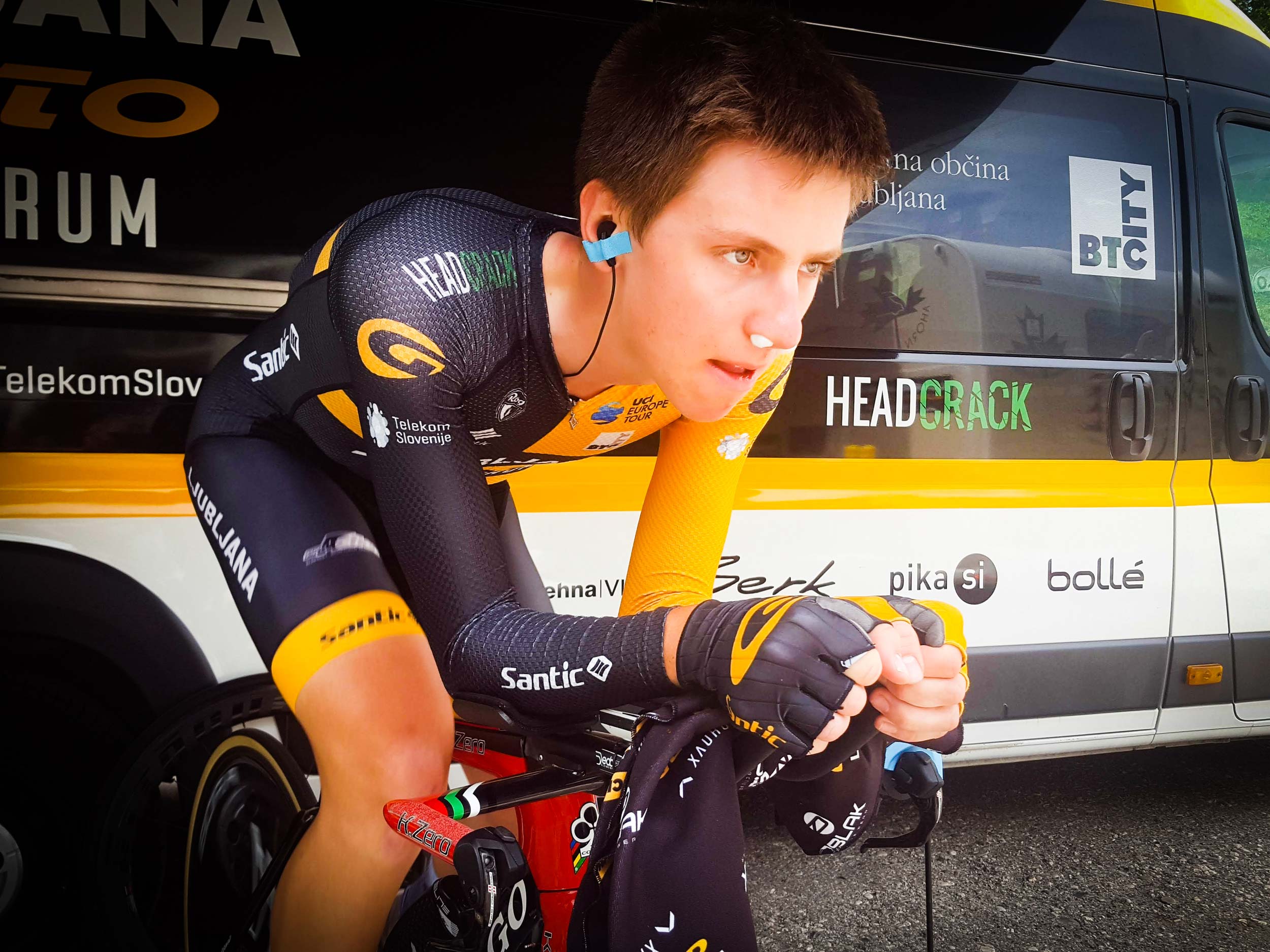 Tadej Pogacar in 2018, when Headcrack – an Australian company created by Tim Guy – was a team sponsor. (Photo: Tim Guy)

Just before the Tour de France of 2017, Tim Guy wrote to RIDE Media asking if he could tell his story. It was less about cycling and more about anxiety and he wasn’t afraid to go into detail.

He wrote a series of articles and spoke about how he used bike riding as part of his therapy.

He’s now teaching in Cowra, a few hours west of Sydney, but it’s a new job that’s come to him after a long period working in the cycling realm. Not so long ago, he was a sponsor of a team that was part of a sporting/mental health initiative. The Australian went to Slovenia to further his racing career… and, while he was there, he did much more.

Tim Guy has, among other achievements, played a part in the rapid progression of Tadej Pogacar’s cycling career. You may not know it, but the Slovenian has another Aussie connection beyond Allan Peiper, the DS calling tactics as the star from UAE Team Emirates spends the rest day second on GC at the Tour, and winner of two stages.

Below is the transcript of the opening part of a much longer interview that explains Tim Guy’s link with Pogacar… and a whole lot more.

– Listen to the full interview click the link below –

RIDE Media: I’m talking with Timmy Guy, who is a guy I’ve known – a bike rider, a teacher, an educator, a self-confessed anxious man… but he also knows Tadej Pogacar. And you could probably say his name correctly… and then tell me a whole lot more about him, because you rode with him for a long time. And you sort of grew up in the cycling world with him.

Can you explain your connection and then tell us a lot about this absolute superstar of cycling…?

Tim Guy: “My connection with Tadej is that in 2018, I was working alongside Tomaz Poljanec who was the former road commission president for Slovenia and also a member of the European Cycling Union board.

“He and I got along really well. He was a director on a team called Attaque Team Gusto and, in the end, it looked like that team wasn’t going to get sponsors for the next year and the two of us wanted to try to build on what we had. And in Slovenia there was a team called ROG-Ljubljana, Ljubljana is the capital of Slovenia, and this ROG-Ljubljana had sponsored a team since 1949 – so a very long time.

“In recent years though, they’ve lost a lot of their sponsors and were running on pretty thin resources, so they weren’t able to get to as many races as they would have liked to. It was a full under-23 outfit. We went across and decided, ‘Well, maybe we could try and boost things a little bit and Tomaz had some connections with the president of the Slovenian senate.’

“He said that, if we could get an Australian sponsor and make it a bit of an international thing, that he would help us find additional sponsors.

“So, in the end, I went in as a sponsor with Headcrack, which is a mental health awareness platform, and that was enough to get the ball rolling. We brought across Gusto bikes, which is a Taiwanese bike company, to sponsor the team, on this team Tadej was already a rider.

“He had been there for a number of years and, from a junior, he showed some pretty impressive results. They’d already earmarked him.

“A lot of people think he’s pretty young and that he’s just popped up onto the scene, but he really has been talked about for four or five years already. There’s been quite a bit of talk about Tadej.

“I know that, with the UAE Emirates, who he was with when I first rode with him in 2018, he had already pencilled a deal [with the future team] before the season even began, so we kind of had him ‘on loan’. And then, that year, he went on to win the Tour de l’Avenir, which really shot him up into the ranks.

“He won a number of other races for us as well, as quite a good climber, but in general he is just an absolute freak. He has got the capacity that is very, very rare to find and, to boot, he’s also a really nice guy.

“We spent the year [2018, together]. Ben Hill was over there as well, so we had another Australian who had a bit to do with [Tadej].

“Ben did quite a bit of racing with him, he worked for Tadej to try and get him into his positions [in the races], and a lot of that year was around when I was a rider but also on the management side.

“So, on the management side, our role was really about trying to target races and set together a program that would let Tadej show how good he was and, hopefully, it was all leading towards the Tour de l’Avenir. Which, in the end, he did win.” 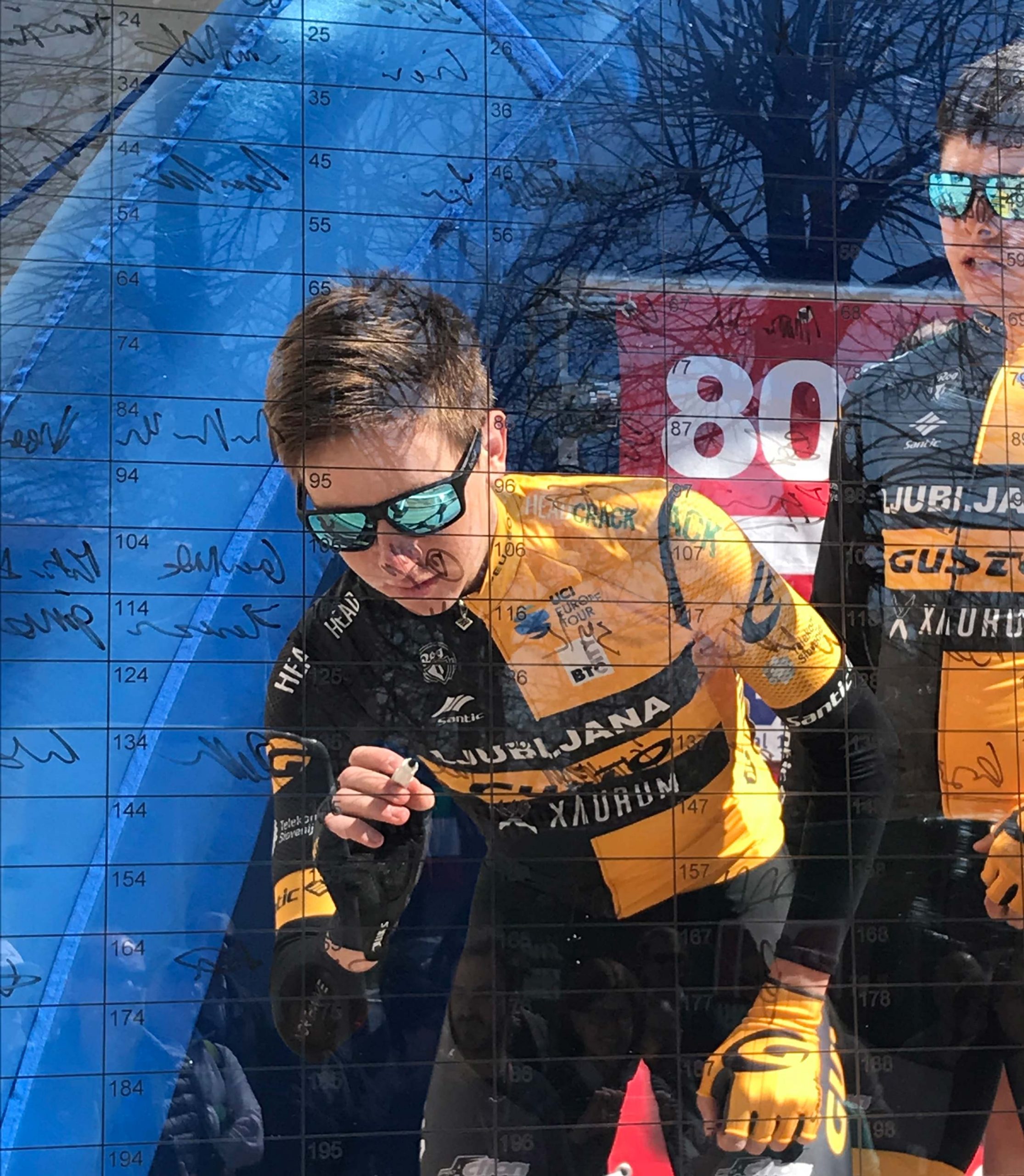 RIDE Media: So, you’ve covered him, we’ve seen him race, we understand it. But let’s kick off [on] with Headcrack, quickly, if we can. Are you still active with that…?

Tim Guy: “It’s a little bit of a side-project. Since I started Headcrack, I’ve had a lot of battles myself with my mental health over the years, particularly with crippling anxiety and depression and eventually I came back into the sport despite that, mostly due to an awful lot of help from my coach Mark Windsor who was able to reshape how [my] training was done and to figure out how I could try and manage it with changing medications, and all kinds of different things.

“So, in the end, Headcrack was a platform that I designed for me to be able to share my story – and some other peoples’ stories… really, it’s about sharing, honest, open stories, about experiences with anxiety and depression…

“It’s like saying, ‘We don’t have a cure, we can’t tell you how to fix you, all we can do is tell an honest story, and tell our story.’

“That was the basis of Headcrack and when it came to this team, I put some money forward to try and get that off the ground.

“But also, in Slovenia, unfortunately, it’s about – it’s changed over the years, but it has yo-yoed in the top-five of European countries for the rate of suicide, particularly amongst men. So, they don’t have an exceptional amount of awareness…

“Through Headcrack we were also able to go into some Slovenian schools and talk… the Slovenian cycling media were also really great and got on board and were able to get some information out there about Headcrack and my story and the story that links through with Tadej Pogacar being one of the riders.

“It’s pretty cool to think now, I’ve got a signed jersey back home from Tadej, the year when his development team was riding with Headcrack on his shoulders.

“There are some pictures of him winning some races, before he’s gone into the WorldTour, that have got that Headcrack connection, and that Australian connection.

“For me, and for the others that were involved in that process, that’s a pretty cool thing to be able to lay claim to.”