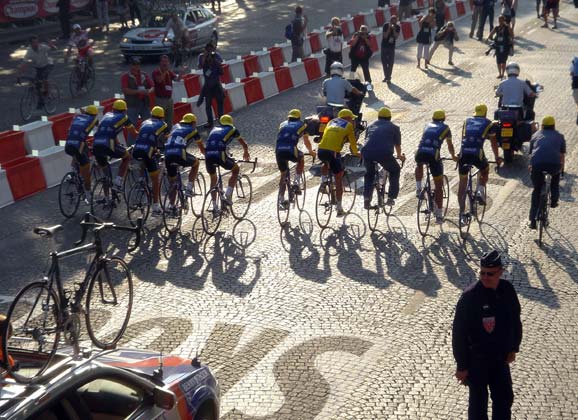 How and why cheats justify their discrepancies

In February we began a series written by registered psychologist Craig Pearman about cheating. The publication of the ‘CIRC Report’ today offers a reminder of how prevalent the topic is when in the cycling world. We continue the commentary with part two of Pearman’s overview that was originally pieced together several years ago after the release of the so-called ‘Reasoned Decision’. 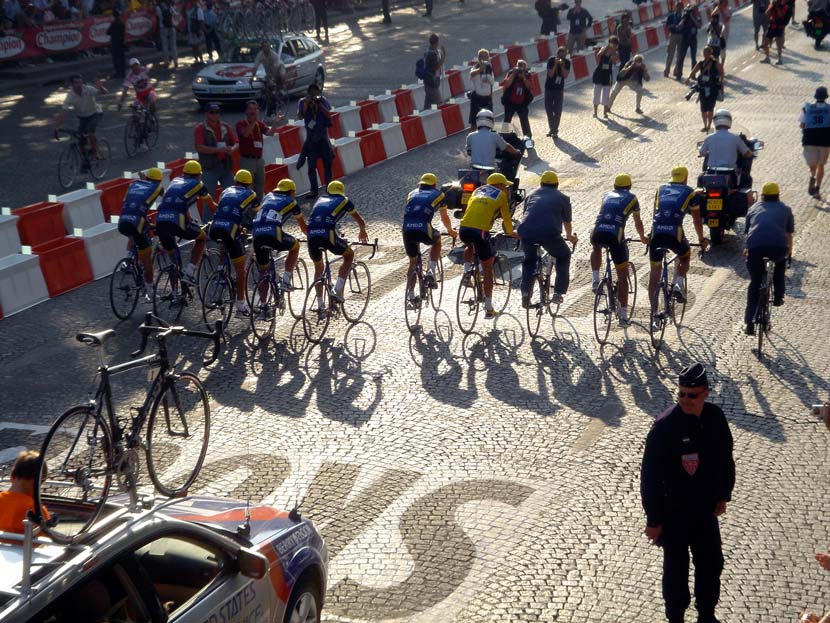 A sixth title… that would not stand the test of time. The US Postal Service team at the end of the 2004 Tour de France.
Photo: Rob Arnold

When and where do we learn to cheat?

We have already seen that the notion of cheating is not a simple one, and that its roots are complex and multi-faceted. (This is made clear in the much-anticipated ‘Cycling Independent Reform Commission’ report, released on 9 March 2015.)

The answer to the questions of where and when we learn to cheat is no less convoluted. As suggested in part one of this series, peer pressure, the values and behaviours of significant others, and the existing mind-set of the individual, all play a role. But what else lures somebody over to the ‘dark side’?

For one thing, it is early experiences. If we learn at an early age that there is more to be gained by winning than by playing fairly, then winning might easily take precedence. Competing against older (stronger) siblings may compound things. And if there is no discussion about the virtues of fairness during those early years, and the focus is only on ribbons and medals, we are further exposed to the possibility of cheating. How many sporting codes (aside from AFL), for example, actually have a medal or a trophy for “fairness”? Certainly, the balance of accolades is tipped in favour of winning. But this does not explain everything, for we are not a species of ‘born cheats’ who are just waiting for the opportunity.

Significant (‘unfair’) life challenges may also play a role in the development of a cheating mentality. For example, injury or illness that can threaten our performance at exactly the wrong moment might encourage us to find some means of getting by (‘just for now’), or getting back to our ‘normal’ levels of competitiveness. Likewise, significant opportunities may provide a degree of pressure – such as when an athlete is told they could achieve so much more (performance improvements, contracts, race wins, etc.) if they just had that little extra edge, that additional one or two per cent.

The psychological and emotional guidance an athlete receives at such times may be crucial in the development of an ethical approach to their sport.

Learning to cheat also comes from the environment within which an athlete competes. As stated earlier, the first presumed instances of doping in cycling occurred roughly 117 years ago. At that time, such practices were not illegal. By 1924, riders in the Tour were giving newspaper interviews detailing their use of illicit drugs (including cocaine and strychnine).

The 1930 Tour de France handbook distributed by Henri Desgrange reportedly advised riders that Tour organisers would not be supplying drugs (presumably indicating that riders had to bring their own).

By the 1950s, amphetamine use by cyclists was widespread and generally acknowledged. One particularly notable (and successful) rider of the era suggested that only a fool would imagine it possible to ride such races (as Bordeaux-Paris) on just water.

Although frowned upon, illicit drug use did not become illegal in cycling until 1965. This was most certainly an environment in which ‘cheating’ was well-known, well-utilised, condoned, and probably even encouraged.

At the end of the day though, cheating (in whatever form) is a choice. Sometimes it’s an informed choice, and other times it isn’t. But with all due regard to the roles played by our early learning environments and experiences, we are still faced with that choice. Like so many things, that choice is generally governed by a risk / benefit analysis.

When the perceived benefits are considerable, and the risks relatively low, making the choice to cheat may be easier. And if steps can be taken to further enhance the benefits (such as financial gain) and to reduce the risks (of detection or proof), then the choice may be easier still. After this, the fundamental principles of behaviour modification take over: rewarded behaviours (like cheating to win) increase in frequency, and unrewarded (or punished) behaviours (like playing fairly and losing) diminish. 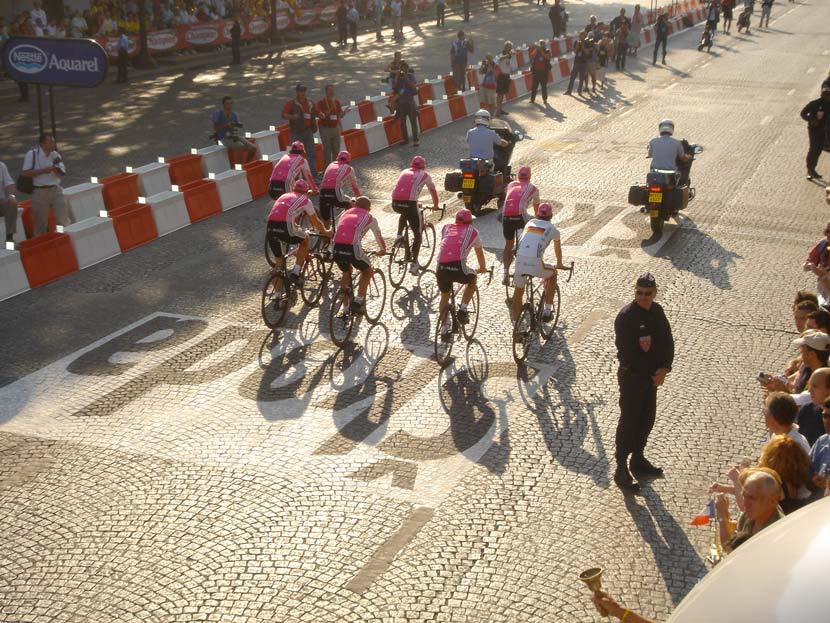 The end of the road… T-Mobile on its lap of the Champs-Elysées after the Tour de France of 2004.
Photo: Rob Arnold

Why do lying and ‘Omerta’ persist?

Once a win has been obtained by deceptive means, and all the elation, rewards and accolades have come along with it, a point-of-no-return is reached. Our hypothetical rider could not easily go back to non-cheating ways, to the probability of losing – certainly not without traversing that path of self-concept once again, and risking the realisation that they have indeed become a fraud. Nor can they easily accept the psychological discomfort that comes with relinquishing their main priority (winning) in favour of some “lesser” priority (adhering to the rules). And so the lie, and the whole house of cards, must be maintained both externally (to the media, fans, competitors, family, etc) and internally (to the self).

The story even ceases to feel like a lie, because it is repeated and rationalised as a valuable part of attaining the sport’s highest peaks. With so many other riders delicately balancing a similarly fragile house of cards, and so much at stake for all concerned, times are tense.

The risk/benefit analysis alluded to earlier also plays a role here. Aside from such obvious things as honesty, integrity, social justice and the like – what are the benefits of telling the truth? And what are the risks?

To put it mildly, at this level of elite professional sports competition, the risks are tantamount to suicide. Loss of titles, loss of status, loss of sponsors, loss of team membership, loss of license, loss of earnings (past, present and future), loss of family and friends, loss of trust – the potential list is almost endless. The benefits perceived in truth-telling (such as integrity) often pale by comparison. On top of this, there is the question of ‘how much’ truth to tell, and how many other people will be implicated by it. But further still, from a psychological perspective, there is the matter of self-image. And here’s where compartmentalisation comes into the picture.

Compartmentalisation is a mental process wherein a person can completely isolate one set of thoughts, ideas or concepts from another. It’s what we try to do when we make the switch from ‘mother’ to ‘business executive’, or from ‘dad’ to ‘football coach’.

We know the two entities coexist, but we keep them in separate compartments – each with its own purpose, perspectives, ideals and behaviours. It is also a process through which a person can engage in seemingly indefensible acts of deception and manipulation, and yet still believe in their own righteousness and integrity.

It functions in a similar way to cleverly designed filing cabinets, such that when you have one drawer open, you cannot open another otherwise the whole thing falls over. (This is why psychologists exist. We’re like ‘filing cabinet mechanics’.) So long as the information in these distinct ‘worlds’ is kept safe and separate, all is well. But try to tell the truth – the whole truth, and nothing but the truth – and you have to open up everything, to everyone. For most people who have constructed a web of intricate lies, this is a very scary prospect.

Controlling it all – what information comes out, when, where, to whom, in what order, etc – is extremely difficult. Furthermore, the consequences may be unpredictable, and the resulting mess unmanageable. (This is particularly true in team sports, where each person’s ‘filing cabinet’ is cross-referenced with those of all the other team members.) When you bear in mind that we are talking about elite professional athletes (people with perfectionistic tendencies, control issues, obsessions, compulsions, and a very high set of standards), the prospect of a ‘universal and uncensored truth’ becomes impossibly unlikely. 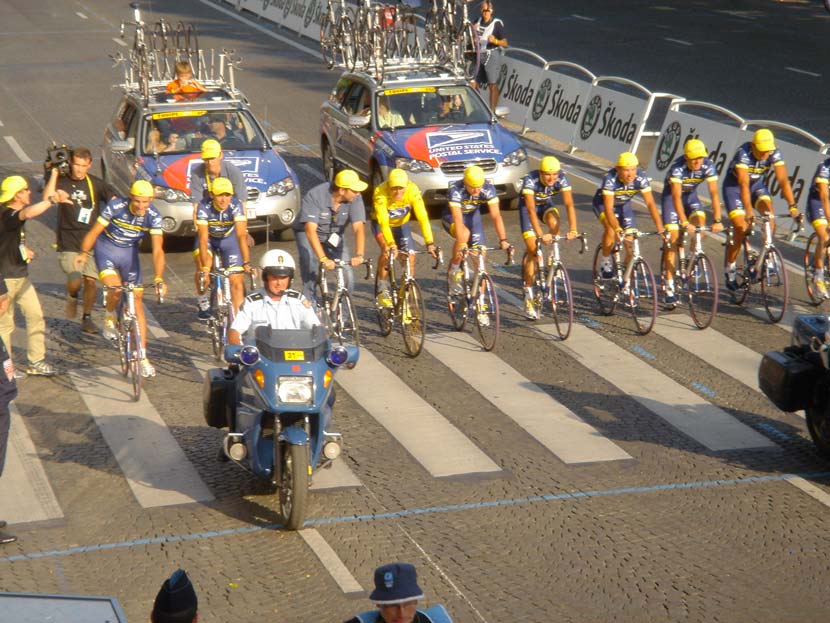 An era of asterisks… the Tour de France of 2004.
Photo: Rob Arnold

Note: Pearman is a registered psychologist with a clinical practice on the Gold Coast, Qld. He has been involved in the field of psychology for 30 years and now focuses a lot of his time on the psychology of sport and athletes (and where that interface can go awry).

His interest in this particular topic has been growing since he took up cycling as a hobby some years ago. The article itself was sparked as a result of many (sometimes heated) discussions about doping in cycling, usually during his Sunday coffee ride.

He felt an educated psychological opinion-piece on the subject of cheating was apropos, especially since the televised events of 2013. The article is in part a response to one athlete’s self-answered question, “Was I really cheating? I don’t think so!”