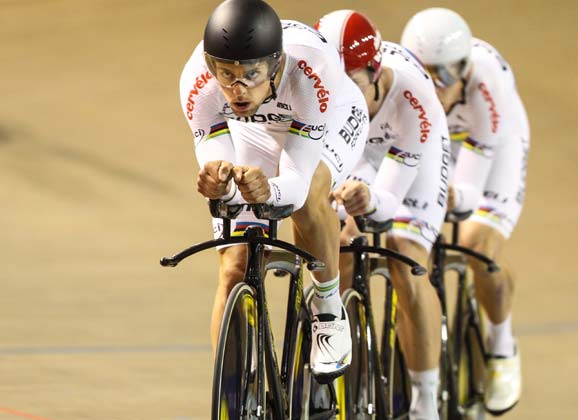 Bobridge’s hour: the influence of air pressure and temperature

The two most recent hour record breakers, Matthias Brändle and Jens Voigt, both completed their successful 60 minute efforts in Switzerland. Rohan Dennis will test his Tour Down Under-winning legs for an hour on the velodrome Andy Rihs built in Grenchen, Switzerland (8 February). And Jack Bobridge, well, he’ll ride around the track at the Darebin International Sports Centre (DISC) in Melbourne. 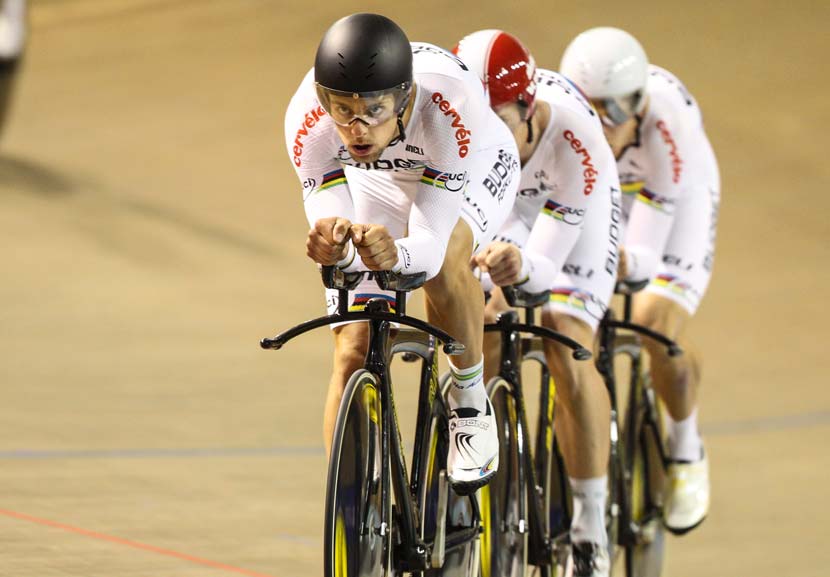 Fast times are being posted at the nationals this week and the plan is to warm the DISC velodrome up to 28 degrees for the night of Bobridge’s hour attempt…
Photo: Jarrod Partridge

This location has raised a few eyebrows since its announcement in November 2014.

Doomsayers have speculated that it will be too cold, or too hot, the barometric pressure will not be fast, and the relatively low altitude will increase air density – all factors that will make his job to surpass 51.852km even more difficult.

In Bobridge’s first attempt at the hour, a matter of metres could be the difference between a pass or a fail. A triumph, or a let down.

RIDE has spoken to Bobridge about his form and feelings leading in to the event, and has analysed his bike. It makes sense then, for some attention to be paid to ‘the conditions’ and whether or not they will have any real and measurable impact on the result.

For an informed, scientific point of view, we consulted Nathan Barry and Tim Crouch who are aerodynamicists at Monash University. After meeting the pair in RIDE #66, it is clear that they know their bikes, and they know their science.

So here is an abridged version of their original reply to the question:

“Can you offer a summary of the benefits of different conditions and perhaps even offer an overview of the difference of sea-level versus altitude? Yes,” we concluded with our request of the aerodynamicists, “we know it’s a complex concept but it can’t hurt to ask.”

Aerodynamic drag is a function of a rider’s speed, the air density and their drag area. The drag area is a coefficient that effectively describes how streamlined an object is. It is a fixed property of the rider and so will not change with atmospheric conditions. Similarly, velocity is independent. Therefore when considering the effects of the conditions on the performance, density must be closely examined. Lowering density will lower drag. Less drag reduces overall resistance and means that a cyclist will be able to go faster and travel further.

For Jack Bobridge, (as for any rider), the velocity and the CDA are basically predetermined before such an important event. We can assume that he has done as much work as his busy schedule could allow getting his helmet, skinsuit, body position, and Cervélo T4 as aerodynamic as possible.

The velocity is pretty simple: Bobridge will try to ride as fast as possible.

This leaves the density as the only ‘untrainable’ variable in the drag equation.

Lower air density reduces drag. Therefore a low pressure and relatively high temperature will be best for Bobridge to complete his hour. Obviously there are limits in terms of human performance, but with natural atmospheric variation a warm day with low pressure is ideal to minimise drag.

Taking the absolute minimum, mean, and absolute maximum temperature and pressure for Melbourne in January proves that there could potentially be a large variance in the air’s density.

Conditions at this week’s track national championships have been relatively quick and the times are good. But the DISC facility can also be heated. RIDE understands that the temperature will be set at 28 degrees for Jack Bobridge’s ride on Saturday evening. Enabling a fixed temperature is a huge bonus for Bobridge as it removes another variable from the drag equation. From a geographical perspective, Melbourne’s temperature is now essentially irrelevant.

Another factor that will affect Bobridge’s performance is rolling resistance and friction. This can be altered by temperature but is much less significant than aerodynamic drag. Nathan Barry tells us that, at 51km/h the aerodynamic drag will be around 90% and therefore, a 5% variance in drag resulted from density will equate to a larger performance gain or loss when compared to rolling resistance.

Humidity also plays a role, but relative humidity (the numerical percentage we are used to reading on weather reports) varies with temperature. For a given day, with a certain temperature and pressure, an increase in humidity will result in a reduction in density. Again, lower density means a reduction in drag and subsequently less resistance for Bobridge.

Altitude has also been brought up when discussing the best place the tackle the hour. As a general rule, pressure decreases as altitude increases. Lower pressure means lower density resulting in less drag and a faster rider. Melbourne is effectively at sea level and so has a relatively high pressure – which is not ideal for the hour record.

Mexico City stands out as a city with great success for track athletes chasing records. It was in Mexico City, in 1984, where Francesco Moser broke the hour record twice in four days! It has an altitude of 2,250m which equates to low air density and a potential atmospheric drag reduction of up to 15%.

However, when racing at this altitude it is also important to consider the physiological factors. There is a relationship between pressure and oxygen saturation. When pressure decreases due to altitude, oxygen saturation in the air also decreases. This means the athlete is under greater stress and can not necessarily achieve the same output power. As such, a drag reduction, even one of up to 15% could be offset by the loss of human output if the rider has not adapted to such conditions.

Despite time trialling on an indoor velodrome, Jack Bobridge’s hour attempt in Melbourne will certainly be affected by external conditions. Only when the final second is completed will we know if the conditions – temperature, pressure, humidity, altitude, heart, lungs, muscles, brain – were ideal to carry the South Australian to another world record.