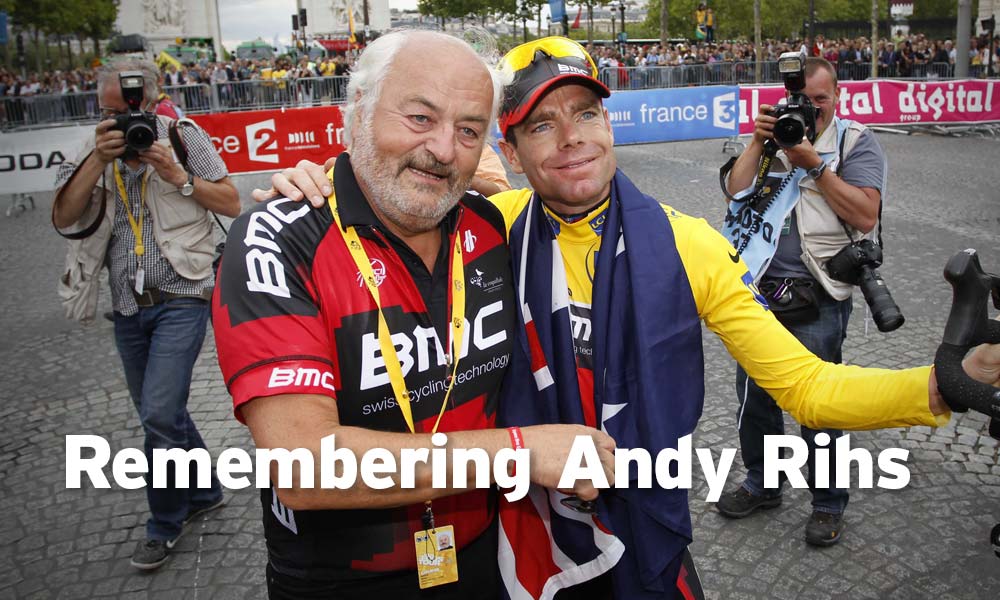 He was one of cycling’s biggest benefactors and a genuine fan of the sport. Andy Rihs passed away on Wednesday 18 April and we remember him and his larger-than-life character fondly.

Numerous stories spring immediately to mind when considering Andy Rihs. He was a successful businessman who found one of the true loves of his life after making his fortune; cycling would become richer because of his passion for the sport. But his impact on the peloton extends well beyond investment alone.

Rihs may not have had the physique of a cyclist but he was often seen clad in lyrca and riding bikes from the company he owned. BMC is one brand that is synonymous with the man who died on Wednesday after a long battle with illness.

An eternal optimist he could find a joke from almost any setting. His cheeky giggle could often be heard at bike races; he was one sponsor who derived considerable pleasure from his contributions to the cycling scene.

Although his passion was obvious, he never wavered when it came to business – even if some commercial decisions seemed to be driven more by his enthusiasm for what could be, rather than the profitability. There is a long list of companies that Rihs was associated with, and two of them were titles of teams that won the Tour de France… Phonak and BMC. Only one would stand the test of time…

“It was like being hit by a hammer,” he said when asked of his reaction to news about Floyd Landis’ positive test for testosterone, announced only days after he celebrated victory on the Champs-Elysées with Rihs and many others associated with the team in 2006. It took a toll on everyone involved but it wasn’t the end for the businessman and his backing of cycling.

He took a hiatus but returned to the pro peloton albeit with his bike brand as the title sponsor rather than the hearing aid company. The green and yellow outfit made famous – and then infamous – by Landis was replaced by the red and black worn by the likes of Cadel Evans and many other celebrated riders since 2010.

Eventually his team would claim another yellow jersey. In his second appearance at the Tour de France in a BMC jersey, Cadel Evans would arrive in Paris as the overall leader.

The Australian wore the maillot jaune for only one day in 2011 but it was the day that mattered most. And, of course – as with anything Rihs was related to – there was much rejoicing!

BMC is said to be the acronym for a simple, obvious sequence words: ‘Bicycle Manufacturing Company’ – or so the story goes. But Rihs liked to elucidate a little and throw in some humour when talking about the brand to shop owners.

“Better Make Cash,” he giggled at a presentation during one of his many visits to Australia. The room roared with laughter, but no one was louder than the company owner. Others found him amusing – and so did he.

His laugh was infectious and unique. And his approach to sport much the same.

If you finished a conversation uncertain about Rihs’ enthusiasm for cycling, you weren’t listening properly.

“We want to do things in sports or in business, there’s no difference,” he told me at a dinner early in the 2012 season. “I think it’s sometimes difficult to make it with the sports journalists or media people who say that business is sometimes ‘this’ and sport is ‘that’ – they try to make them different things, to separate them. But I like to conduct business in a sportive sense – not to lose. That’s the sport.

“If you have the spirit in a company, you can attract the best people and only then, when someone wins, you realise you have a great team and you can attract more good people. This is the case in business and in sport.”

In time we’ll tell more about the curious character who stopped attending bike races only two years ago because he was too ill to be there in the manner he wanted. If he wasn’t involved in the action, he’d rather stay at home. But, he admitted, he was still watching the racing on TV.

Before his illness he was omnipresent at many events. In the mornings before a race, you’d see him with the riders. During the race he was in the team car. Afterwards he was on the bike… and much later, he was in the bar – often celebrating one conquest or another.

He didn’t do things by halves and he was proud of the impact his teams have had on cycling over the years.

“I always aim for the best,” he said about his approach to life.

“I don’t go in a little bit – for me this is not interesting.”

He was very Swiss in many ways: efficient, hard-working, pragmatic. But the BMC Racing Team has been registered as American since it became part of the sport’s top tier. Why?

“I’ll tell you frankly,” he once explained. “I don’t want to be Swiss with that team anymore because the media plays so badly against us. I said, ‘Forget it!’

“The media took it on in a way that I could not support. They did it in a really dirty way because we were a Swiss team.

“Our biggest market, anyway, is the United States. I don’t want to go into much detail. There are things that were written in the media when I said that I wanted to come back into the sport. There is no reason not to be an American team.

He was adamant, funny, charismatic… and very rich. His investments often made money but when dealing with the sums associated with the many companies that Rihs was involved with, significant losses are often also inevitable.

When his shares dipped, he looked to remedy the substantial losses – but, at the same time, he never stopped supporting cycling. It was one thing that gave him youthful energy even in his later years. And cycling is richer for his contributions.