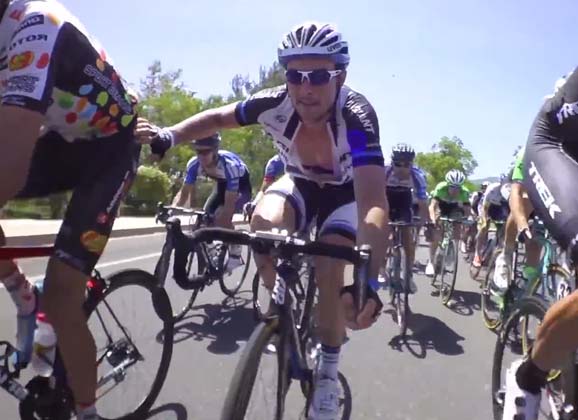 Inside the peloton: footage of a sprint

Getting a better perspective of the action

Using Shimano’s new on-bike cameras in the Tour of California, Koen de Kort and John Degenkolb give fans a unique look at what it’s like to prepare a sprint in the pro peloton. The Giant-Shimano team was one of several to take advantage of a special exemption by the UCI that allowed on-bike cameras to be used for the race in California in 2014.

We have seen the other teams also taking advantage of Shimano’s new camera. Belkin and Tinkoff-Saxo, for example, gave footage captured from their bikes to InCycle network to put together some highlights packages. And, judging by the uptake and commentary on social media, it’s clear that this initiative is not just showing off cycling from a new perspective but it’s highlighting the skill and fitness of the cyclists in the pro peloton.

“It really looks cool and indeed the way forward I think,” said Koen de Kort about the footage that shows the final three kilometres of the final stage from the Tour of California (featured in the link at the top). “This could also give a great insight in the fight to the Oude Kwaremont in the Tour of Flanders, or what happens exactly in the run in to the Arenberg Forest during Paris-Roubaix, or what happened exactly in a big crash. Hopefully the UCI will realise the enormous potential and change the rules [permanently]. It also helped us analyse the sprints and what we could still improve on, very often things happen so quickly in the last few kms that I barely remember the details, I think I’m too concentrated for that and watching the video helps remembering and improving for next time.

“I have been thinking about this for a while and if all riders will be required to have a working camera or a dummy on their bikes then no one can complain about weight or aerodynamics, I can’t wait for this.”

Below are some links to the InCycle footage from various stages from the Tour de Suisse in June.