At the start of the 2020 Giro d’Italia, there were 18 Australian riders. After 15 stages, 11 remain… A mountainous final week awaits and the terrain suits Jai Hindley from Team Sunweb who moved up from 10th on GC to third overnight. 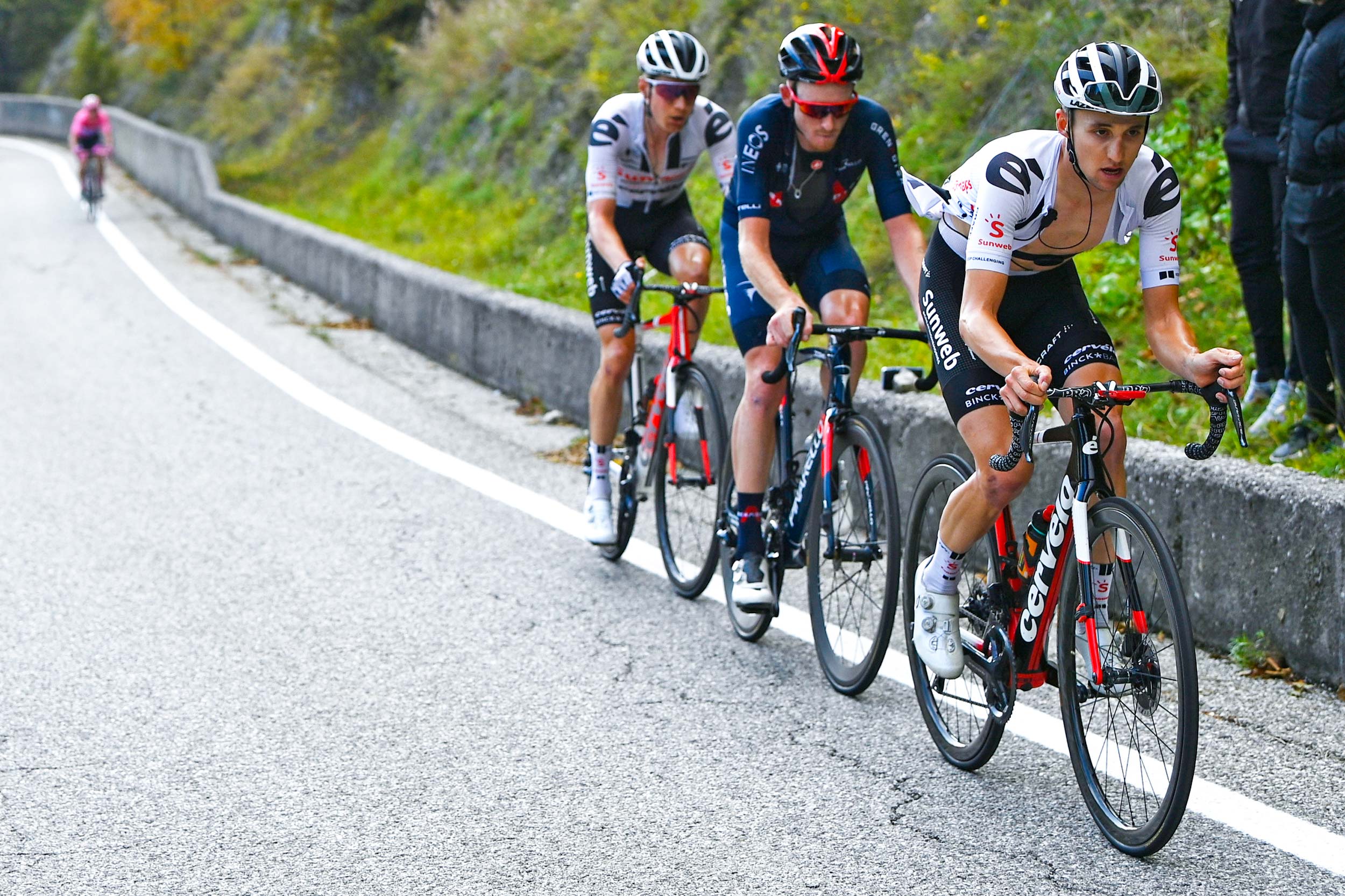 The pace set by Jai Hindley on the final climb of stage 15 was too much for the race leader, João Almeida. The Portuguese rider lost contact with the leading trio but he retains the pink jersey by just 15 seconds… with Wilco Kelderman and Jai Hindley now Almeida’s closest challengers. (Photos by La Presse, via RCS)

The 2020 Giro d’Italia has provided plenty of drama and while there has been much discussion about it even being contested, it now seems as though the race may make it all the way to Milan next Sunday. The second rest day could effectively become another ‘stage’ with the tests for COVID-19 possibly contributing more to the attrition rate that has seen the peloton drop from the original cast of 176 to the 138 who remain after 15 stages.

Watching the racing from afar isn’t easy, certainly not in Australia where there is no free-to-air TV coverage. Furthermore, the late-season date (and time changes because of daylights savings in most states) means that stages finish at an even more disagreeable hour for Aussie fans.

Still, the results tell a lot of the story and interest is piqued when, after the 15th stage, you read that a young West Australian has climbed up the rankings form 10th overall to third with an impressive display in the Dolomites.

After a couple of weeks without posting on ridemedia.com.au it’s now time to start writing about racing again, and Jai Hindley offers the perfect reason to get back into the swing of things after a bit of a pause. 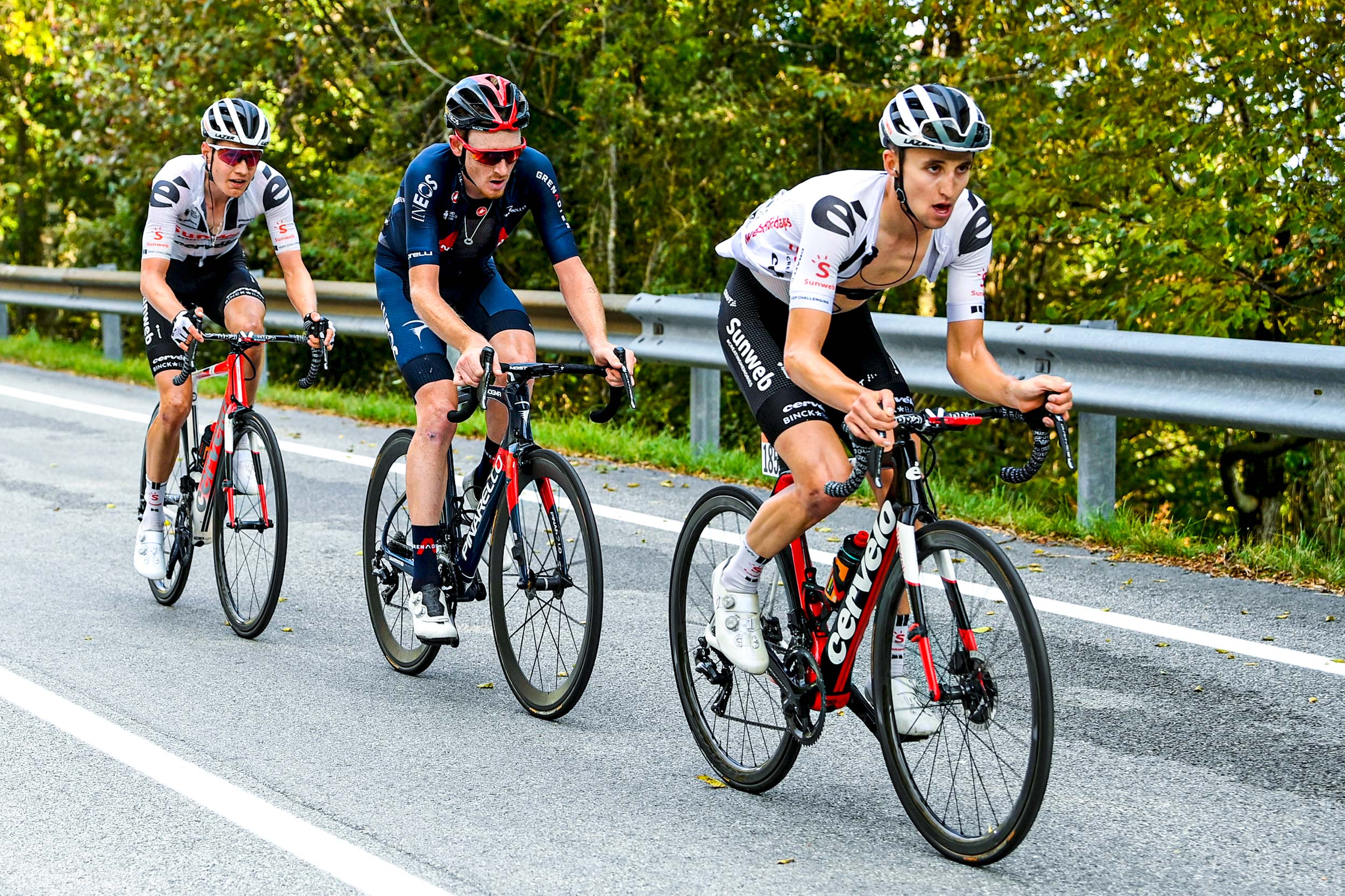 After a weekend of racing that included the final Monument of 2020, the Ronde van Vlaanderen (in a year without Paris-Roubaix), and the arrival of the Giro d’Italia in the Dolomites, there’s plenty to consider in competitive cycling. As an Australian portal, however, we’ll focus on one story that has been emerging for some years now, the rise and rise of Hindley who finished third overnight and muscled his way into podium contention with one week to go in the Giro.

“It feels pretty not shabby,” Hindley told RIDE Media when asked to explain how he feels about finishing third in stage 15 behind his nearest GC challenger, Teo Geoghegan Hart (Ineos Grenadiers) and his Sunweb team-mate Wilco Kelderman.

He was at dinner when he offered this comment and we’ve agreed to a proper interview on the second rest day on Monday when we’ll find out if he believes it’s possible to exploit the mountainous terrain that’s on the itinerary in the coming days. 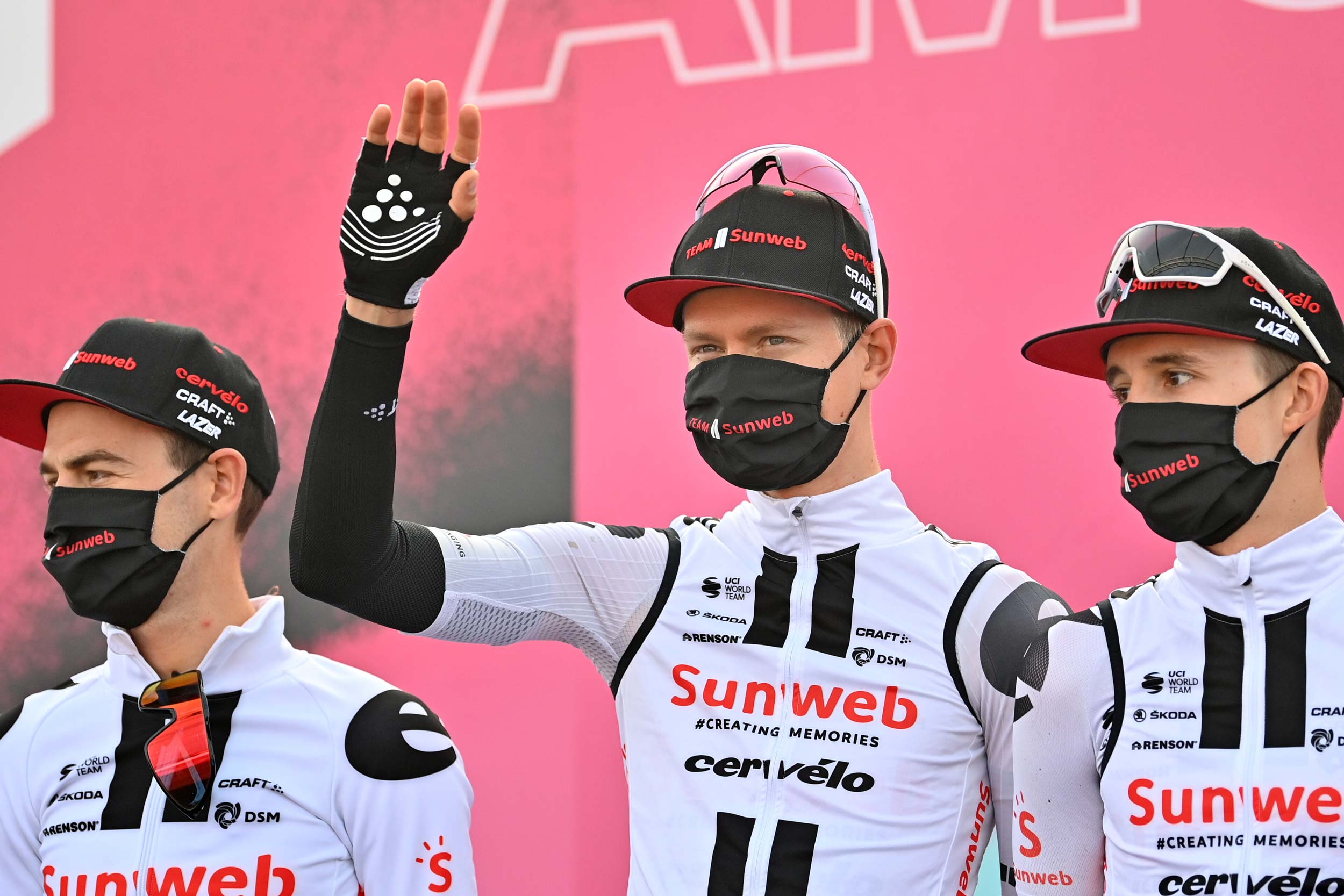 Kelderman and Hindley are now ranked 2nd and 3rd on GC, respectively.

Hindley is a climber of repute. He arrived in the WorldTour peloton in 2018 when he started a four-year term with Team Sunweb. Before that, he had spent a season with the Mitchelton-Scott development team, finishing third in the ‘Baby Giro’ and winning the final stage of that race (beating his team-mate at the time Lucas Hamilton and Pavel Sivakov).

Australian cycling fans have since come to learn much more about the 24-year-old who won the Jayco-Herald Sun Tour earlier this year. Still, he tends to slip under the radar on the international scene… until now.

Third in a mountain stage of the Giro on the third Sunday of an action-packed edition of the Italian Grand Tour certainly helps attract attention. Being in contention for a podium spot – should all go well in the final week, and should the race not grind to a halt because of the pandemic – is another reason to pay closer attention. 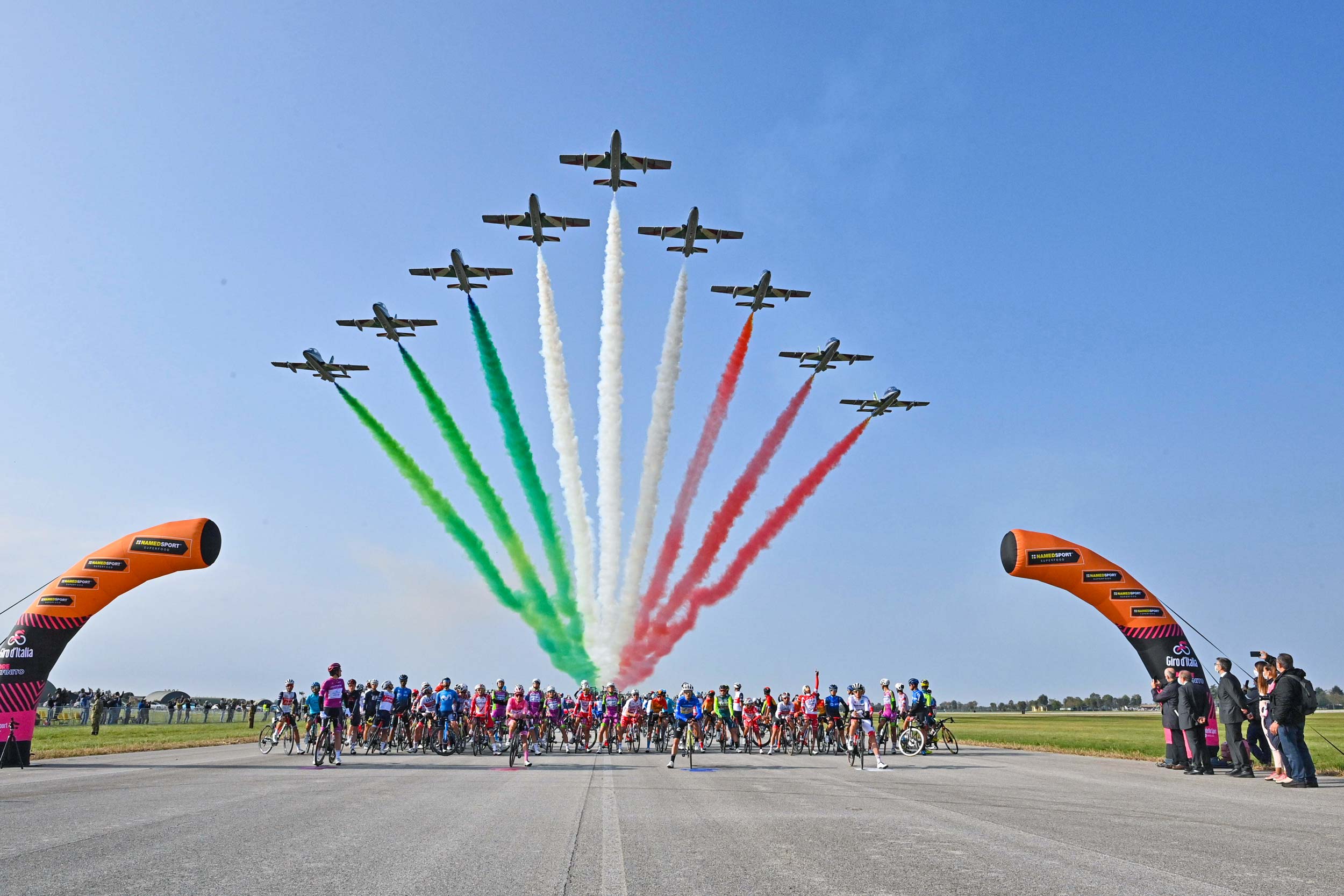 Hindley is now one of 11 Australians in the Giro. At the start of the race a fortnight ago, there were 18, more than any other nation with the exception of Italy.

One of the non-starters after the first rest day a week ago was Hindley’s more credentialled Sunweb team-mate, Michael Matthews. The former stage winner who has also worn the maglia rosa in Giri past, is one of three riders to leave the race because of a positive test for COVID-19. (Curiously, subsequent tests reveal no trace of the virus, but that’s another story for another time.)

For now, let’s consider the efforts of Hindley and ask: could he become another Australian to stand on the final podium of the Giro d’Italia?

It is possible but there’s a long road yet to go before arriving in Milan next Sunday. What makes it interesting for Hindley, however, is the fact that the terrain that lies ahead very much suits his strengths. 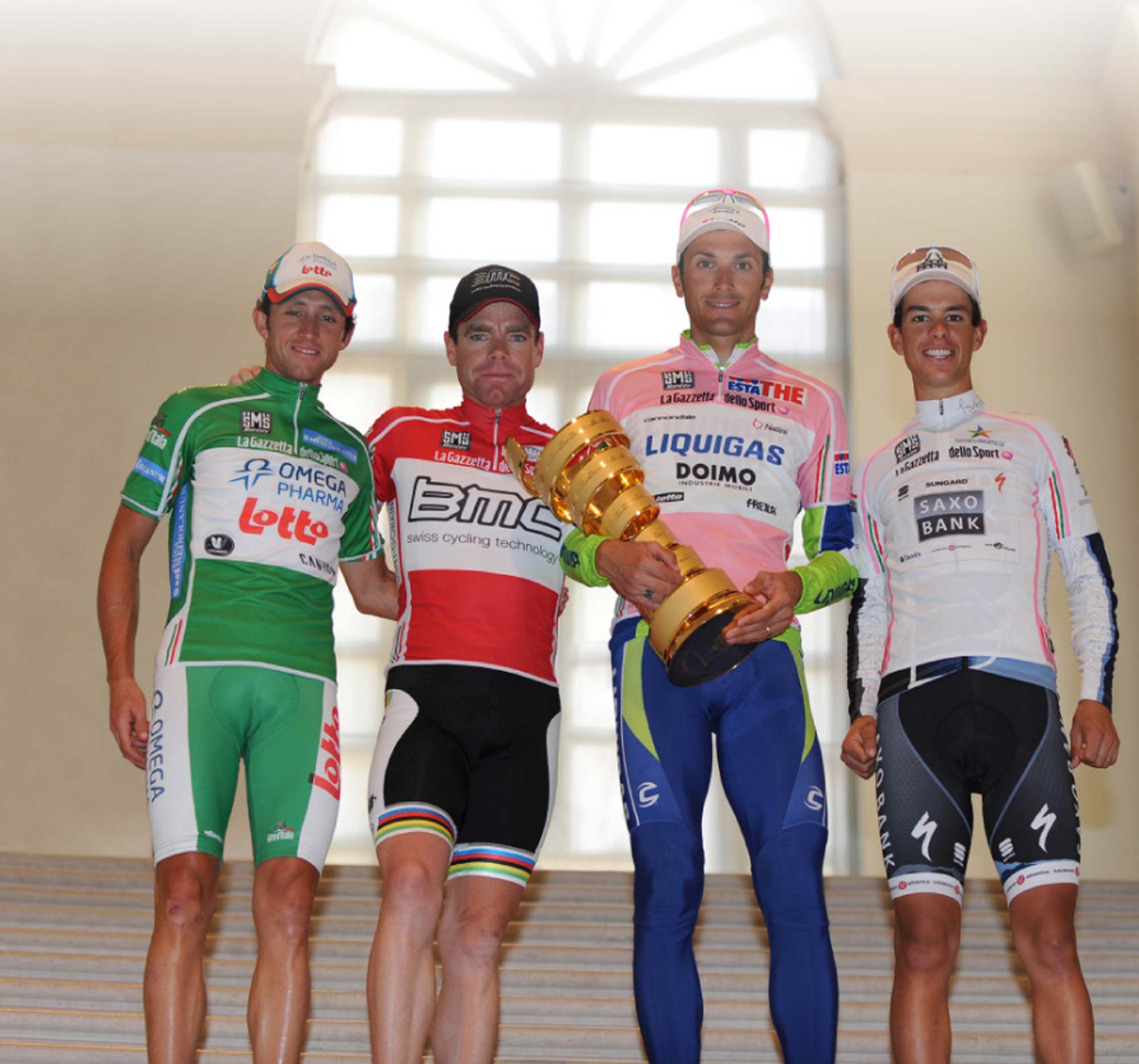 The jersey winners at the Giro d’Italia of 2020 (left to right): Matt Lloyd, Cadel Evans, Ivan Basso and Richie Porte.

Hindley is a pure climber who matches the aesthetic of Matt Lloyd, another Australian who has been on the Giro podium in the past. Ten years ago, Lloyd was the winner of the King of the Mountains classification in what was a remarkable season for Australians in the Italian race. (Note: in the Giro of 2010, Lloyd won a stage and the green jersey as best climber, Cadel Evans won the red points classification jersey and finished fifth overall, and Richie Porte led the race for three days and won the white jersey as best young rider.)

Until now, the best result for an Australian rider in the Giro d’Italia is Evans’ third on GC in 2013. Hindley is poised to match that… but let’s not get too far ahead of ourselves, for although he’s jumped from 10th to third place after his third place in stage 15, Geoghegan Hart – the overnight stage winner – is just one second shy of the podium spot. 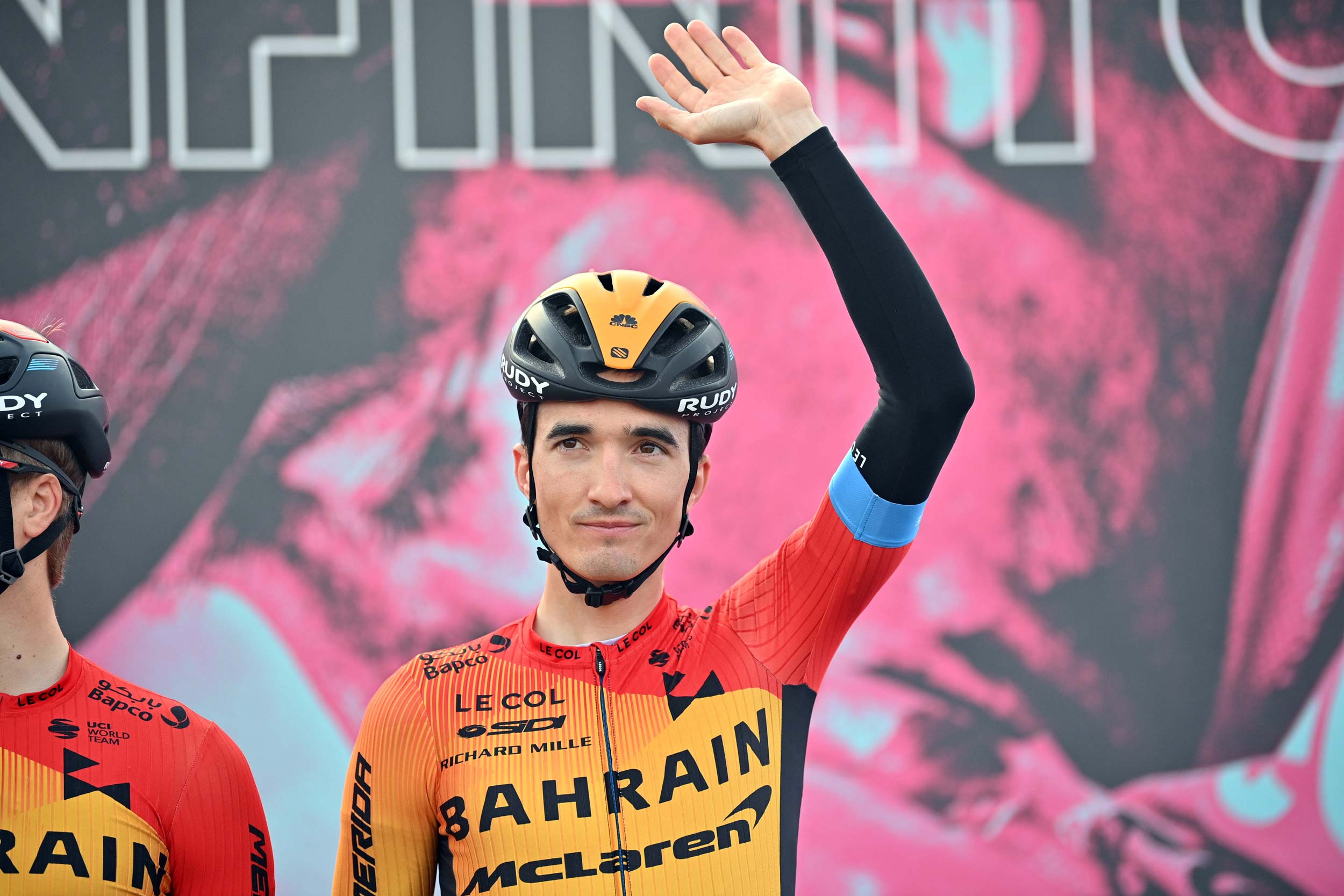 Pello Bilbao dropped from 3rd to 5th place on GC after stage 15.

In the opening days of a Giro that was originally meant to be contested in May, Portuguese fans celebrated the arrival of João Almeida as a Grand Tour leader. He finished 11th on Mount Etna in stage three, when the race was still on the island of Sicily. He became just the second rider from Portugal to wear the pink leader’s jersey. And he’s led the race ever since.

Almeida has been impressive, surprisingly good in fact, and although he has spent almost two weeks in the maglia rosa, he admits that it will be difficult to defend his lead in the days to come.

After stage 15, Almeida’s nearest challenger, Wilco Kelderman, is just 15 seconds from upsetting an impressive campaign in Italy by the Deceuninck-Quickstep Wolfpack and its 22-year-old Portuguese sensation. 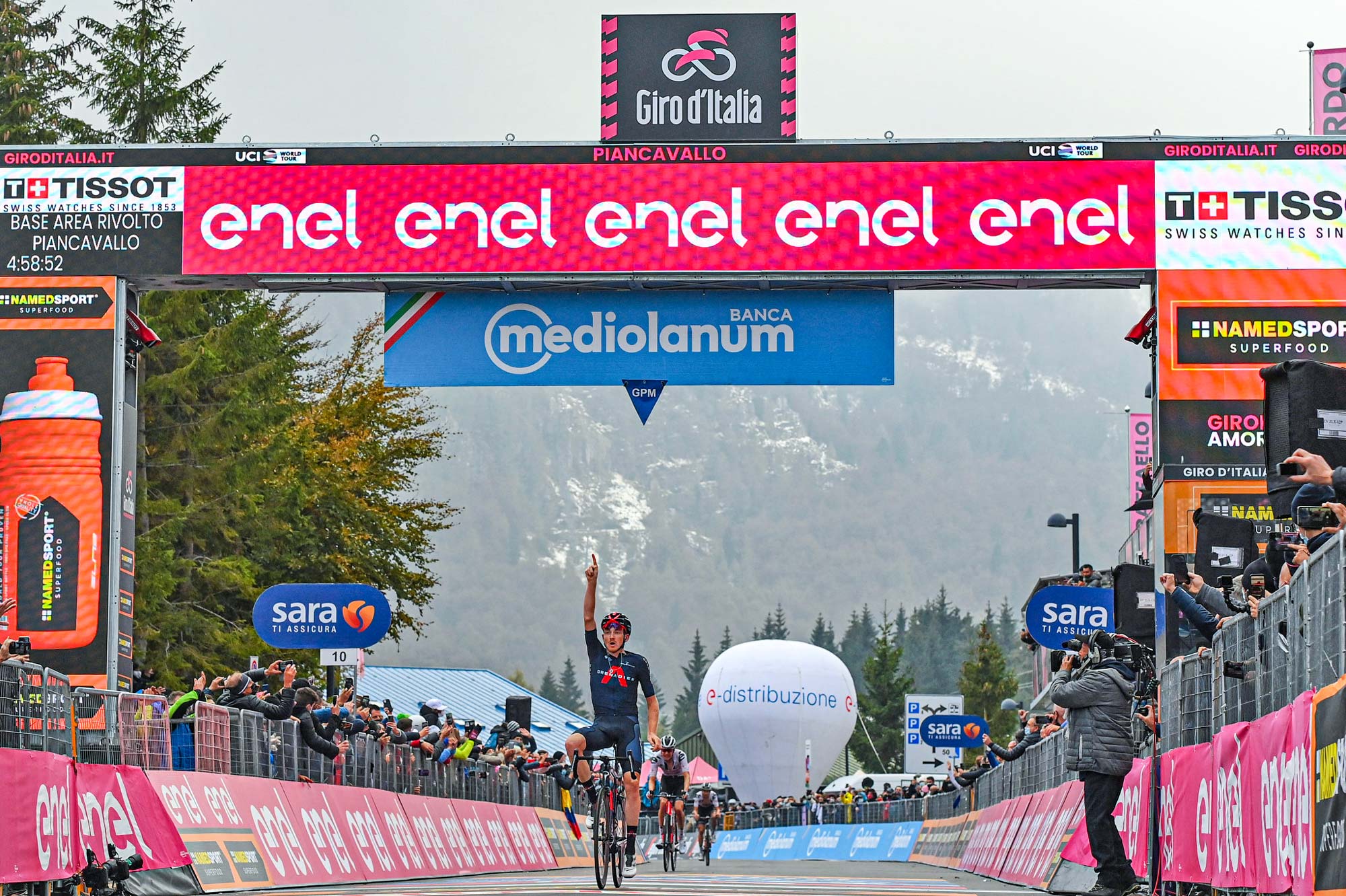 Team Sunweb, it seems, holds the aces even if Kelderman is yet to taste what it’s like to wear pink in 2020. The 29-year-old Dutchman has finished seventh in the Giro in the past (in the year of his second Grand Tour start, 2014) and he is well supported by Hindley along with the five others from Team Sunweb who remain in the Giro: Hindley (3rd on GC), Sam Oomen (21st), Martijn Tusveld (27th), Chris Hamilton (29th), Chad Haga (67th) and Nico Denz (87th).

Meanwhile, the third Aussie from the original start-list, Matthews, watches on from an apartment in Monaco while still in quarantine because of his original COVID-19 positive. 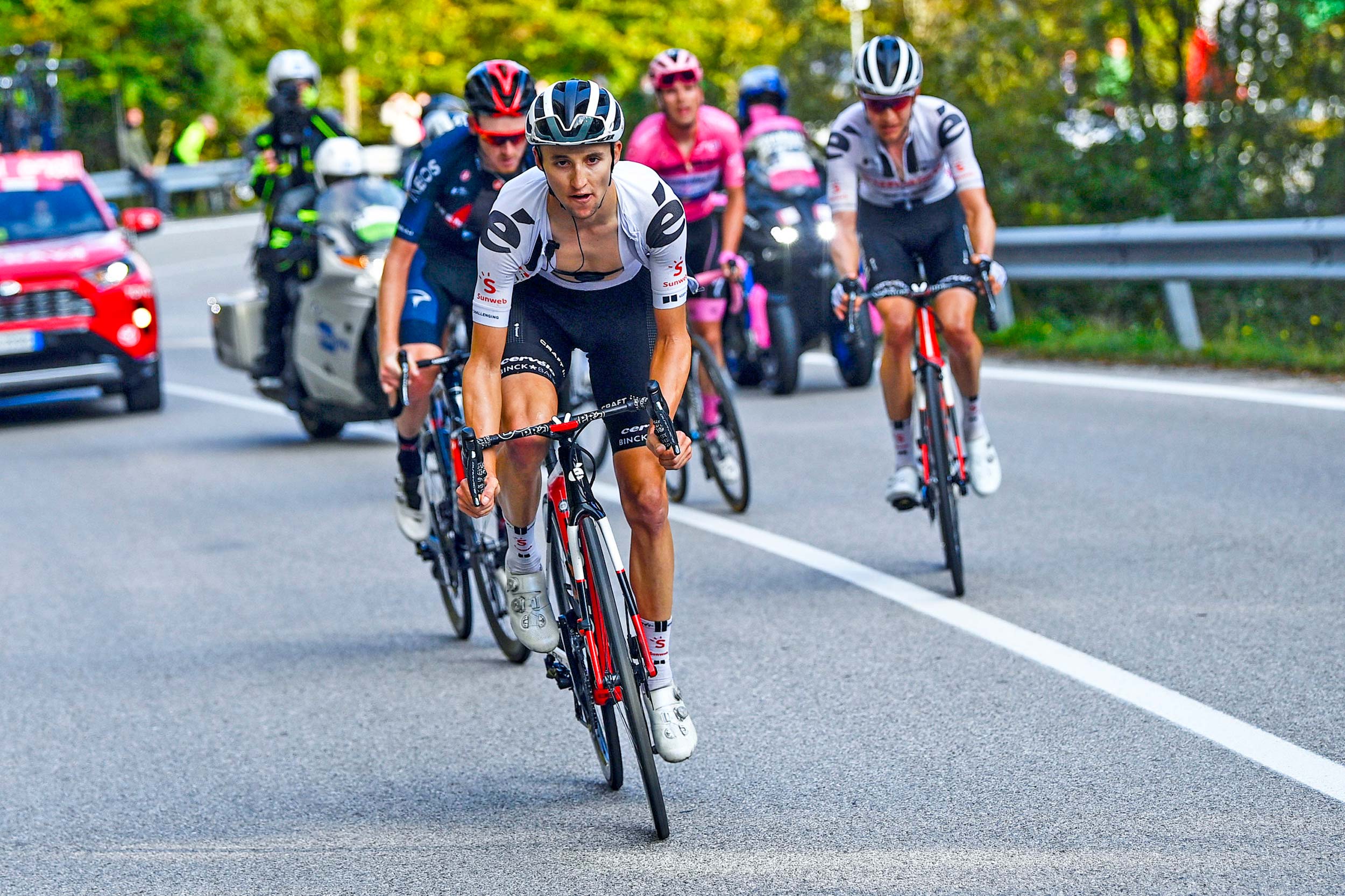 Team Sunweb has been one of the most entertaining and successful teams in this interrupted season.

The German-registered team will look back on 2020 with pride. It can be pleased about the revelation of the Tour de France, the ever-aggressive Marc Hirschi, who has continued his remarkable year with podium finishes in a Monument and the world championships. And now Sunweb is closing in on a possible victory in the Giro with Kelderman.

The Dutchman seems to be the man most likely to topple Almeida, who continues to impress, but for Australian sports fans the highlight of the Giro so far is the emergence of Hindley as a rider who could match – or eclipse – the efforts of Evans with a high GC result in the Italian race.

We’ll borrow from Team Sunweb’s report on stage 15 to conclude this story and follow up with an interview with Hindley when he wakes on Monday knowing that there will be another volley of COVID tests to endure before he sets off on the road to Milan on Tuesday.

“In the final seven kilometres, Geoghegan Hart was the only rider in the race that could follow Hindley and Kelderman, sitting on their wheels before launching an attack to take the stage victory. It was a resounding team display and one that sees the team going into the second rest day in a great position, with Kelderman and Hindley occupying second and third on GC respectively.”

Kelderman summed up the stage with praise for his young Australian team-mate.

“On the final climb everyone did their job. Jai did perfect work, super-super strong.

“Too bad we couldn’t win the stage and fell just short for pink. But how we rode, it was super. I was on the limit towards the final, and we went full to the finish…

“I heard through radio that Almeida was in difficulty, but it wasn’t enough. He is just very strong. If you look at how we raced, it’s just super, also with Jai in third. It gives us a lot of confidence into the final week which will have a lot of uphill finishes. I feel super strong and the team feels super strong.” 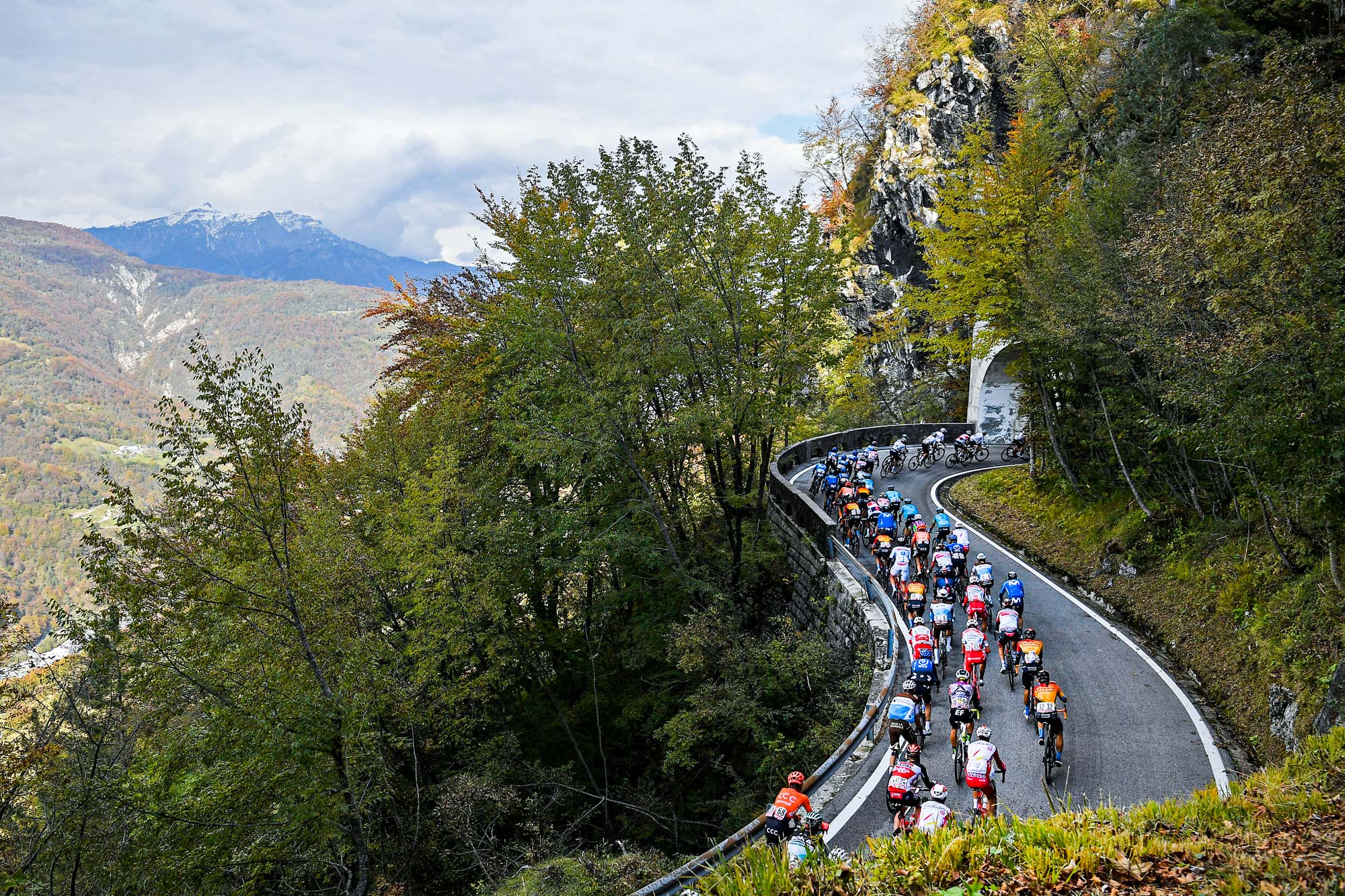