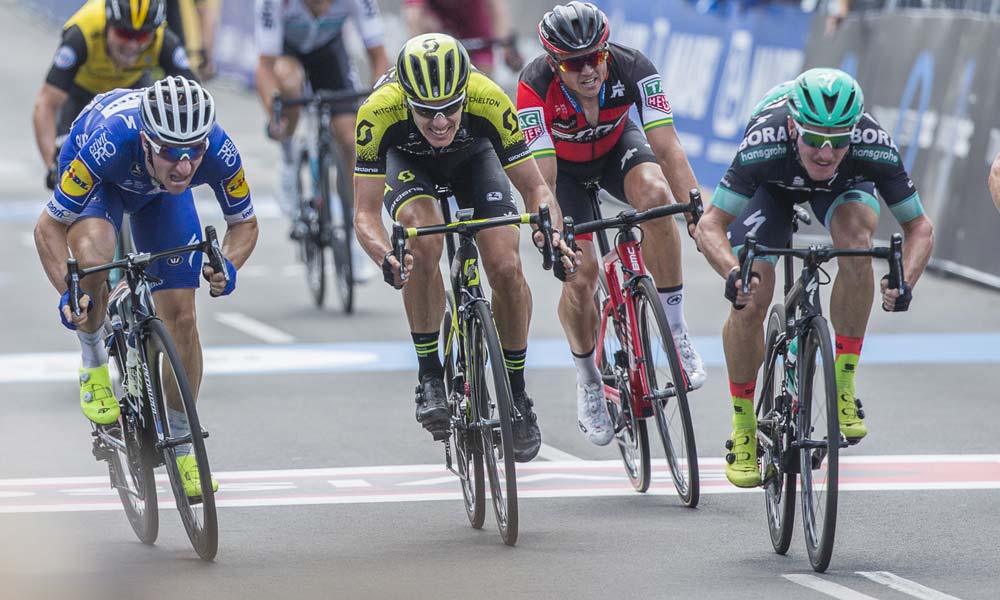 Jay McCarthy: “Today was my day”

Some like it hot, so they say. That’s certainly the case for Jay McCarthy who relished the heat for the fourth edition of the Cadel Evans Great Ocean Road Race. He finished his ‘Summer of Cycling’ with a win.

“One more warm day and back home tomorrow.” Jay McCarthy was one of few who didn’t complain about the heat in Geelong. It was hot enough to make everyone whinge but for the Bora-Hansgrohe rider it was something to savour. Before the start of the Cadel Evans Great Ocean Road Race he was already thinking about what awaits him when he lands back in Europe mid-week.

“I was looking at the weather in Andorra,” he said at the start. “It was minus-8 overnight and two degrees during the day.

“Everyone might be complaining about how hot it is today but I’m just going to take it all in.

“I’ll probably be wishing for warm weather in a week’s time.”

That’s what he said before the race. He’s had a strong presence over this so-called Summer of Cycling: second at the nationals, the last to be dropped by Richie Porte in stage five of the TDU, a rider who was protected on the road and well supported by his team-mates… because they believed in him. 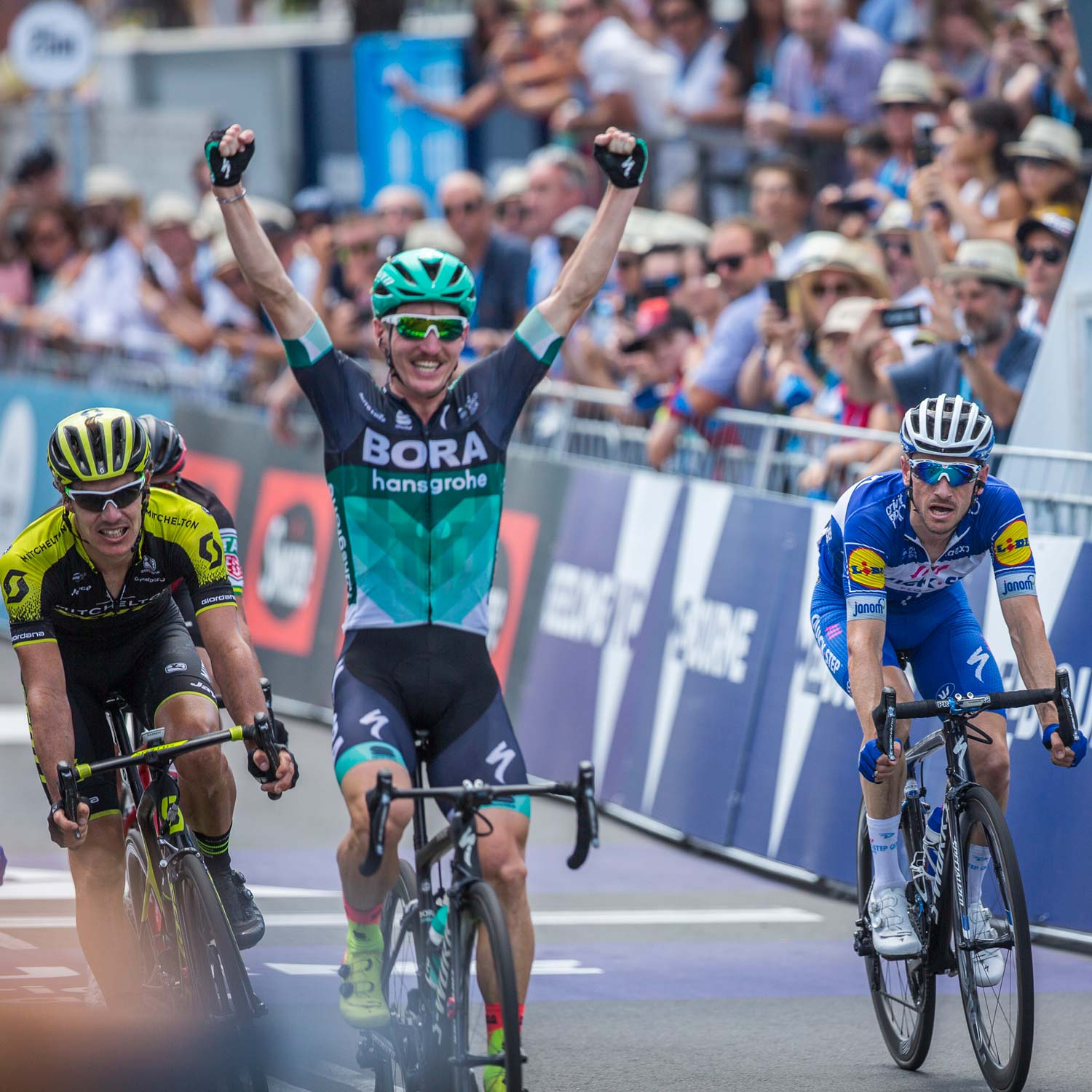 “I’ve been there or thereabouts all summer,” he said at the start of the 163.4km race. “It’s no different today. I’ve shown that the form is good and I’d like to finish off on a high note.”

Fast-forward four hours (and four minutes, to be precise) and he was throwing a victory salute. McCarthy, ahead of Elia Viviani and Daryl Impey… an Australian first for the first time in the four-year history of the race.

He has raced to win each time he’s lined up in 2018 and finally, a day before leaving Australia, he had something to celebrate. “I know I gave it everything at the Tour Down Under,” he said after stepping down from the podium.

“I felt like I probably deserved more out of it but, at the same time, I gave it everything. And coming in today, for the last race of my Australian summer, I felt like I’ve had a pretty consistent time here and to finish off with a win… I couldn’t ask for much more.” 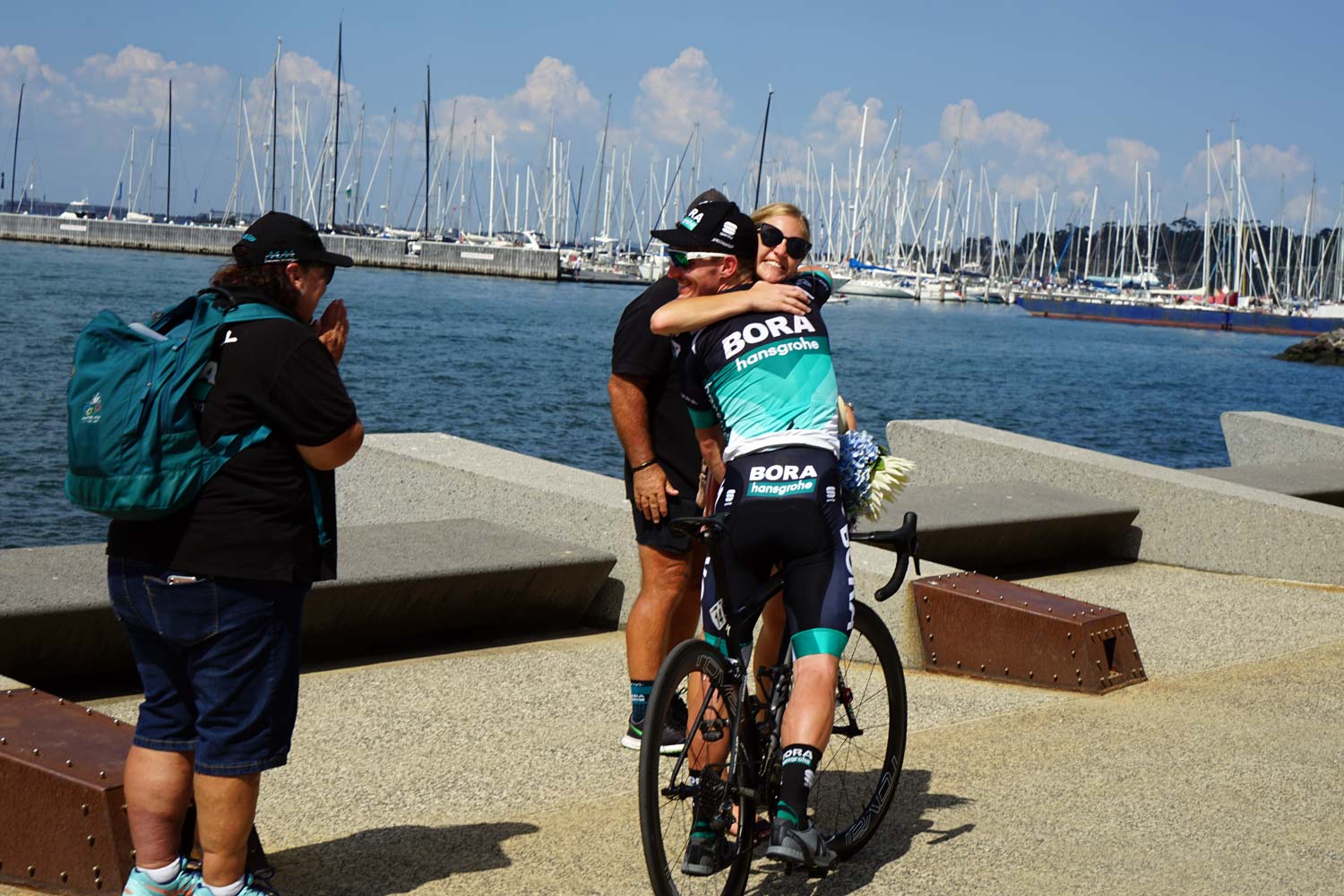 A hug from his wife Kerri, one of the particularly vocal family cheer squad for Jay McCarthy.

It’s a “contract year” for McCarthy. He has been with Bora-Hansgrohe since the squad joined the WorldTour and before that he was part of the Tinkoff troupe that supported him while other peers tended to gravitate towards the comfort of the GreenEdge family. They say the Australian team is interested in him for next year (and onwards) but it remains to be seen what transpires during the negotiations that have already begun in the early months of 2018.

The season is only a few weeks old but this is pro cycling and it’s always easier to perform without the stress of not knowing that the future may hold. A few years ago McCarthy was happy to spread his wings and explore what options existed in the peloton.

He’s found a team that appreciates his strengths and is prepared to nurture him and even work for him when there are much bigger stars on the roster. 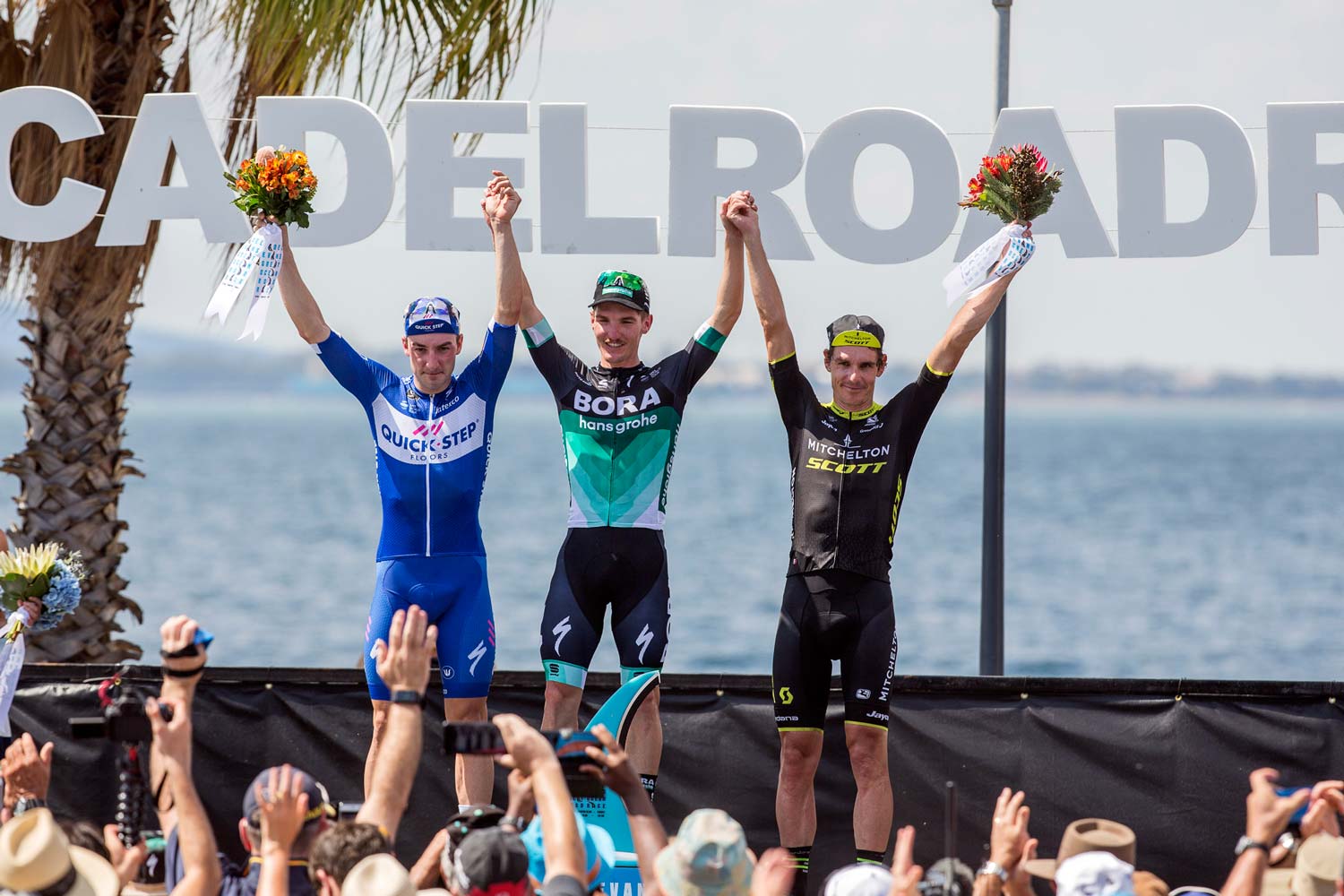 Throughout the TDU McCarthy had support from Peter Sagan who kept on telling anyone who asked that the Australian was a valuable “asset to the team”, one who deserved to be The Protected Rider. And although the world champion was absent from the CEGORR, Bora-Hansgrohe was omnipresent at crunch time.

Challambra Crescent. Up the hill and onward to the finish… that’s the theme of this race.

It is on that rise that Peter Kennaugh scampered a couple of years ago. He built a gap and maintained it. That’s how it can happen: a pursuiter ahead of a peloton… all the way to the line. More often than not, it’s the sprinters who are in the mix. The strong sprinters. The kind who can climb hills, recover, pace themselves and then find top gear and good timing. All going well they get to the line and reap the rewards.

This year it was Kennaugh who again did his thing on Challambra. Out of Sky and onto the Bora roster, the Manxman prompted others into action. Again it split but, as planned, there were team-mates in the mix. That man Jay, and the reliable Mr Daniel Oss, the Italian who left BMC Racing at the end of 2017 and joined the German-registered team as an ally for Sagan… and, today, McCarthy. 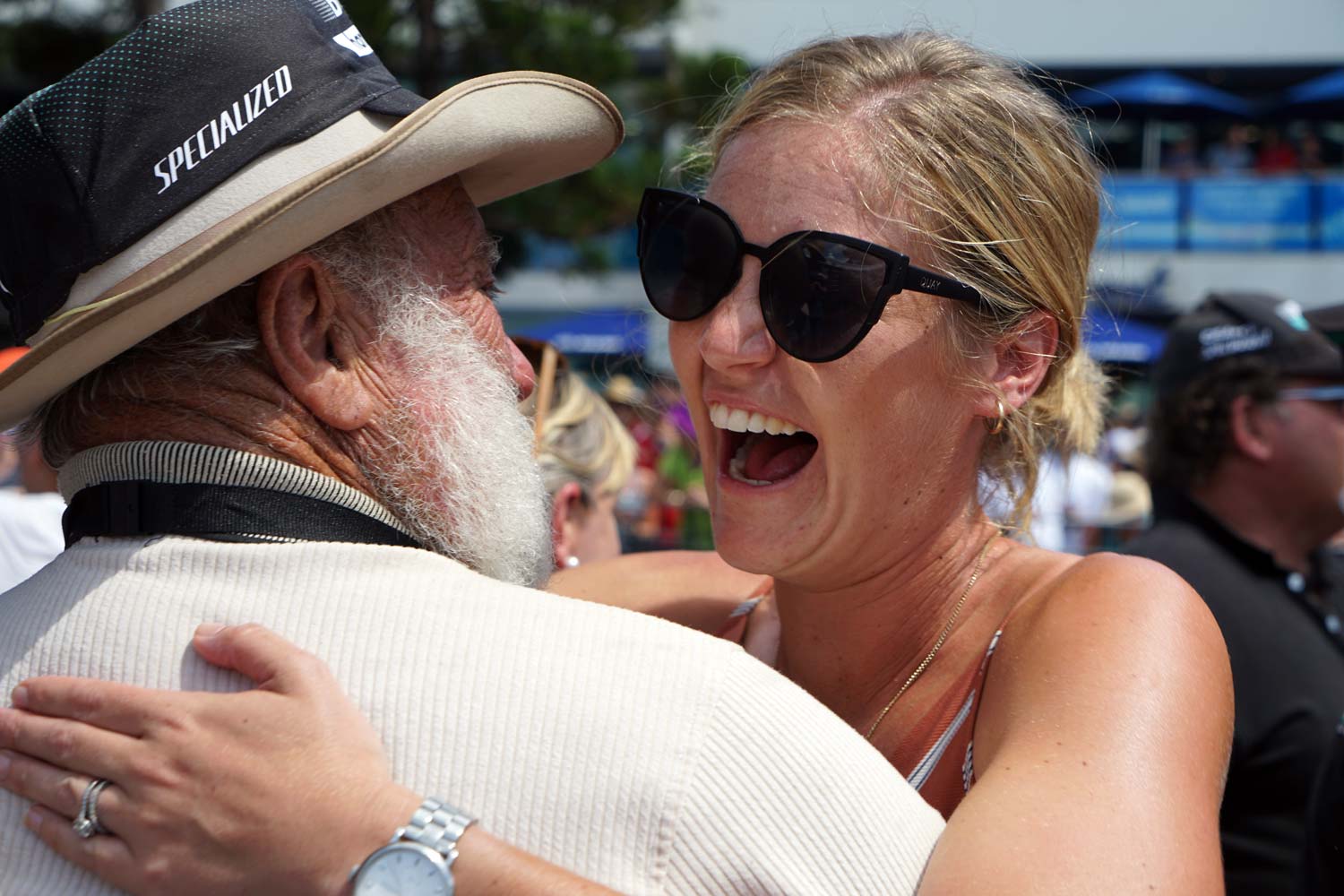 A WorldTour win… fun for the whole family. Kerri celebrates with others from the McCarthy fan club.

After Challambra there’s still plenty of work to do.

After Challambra there’s another hill to climb and attacks to chase.

Last year it was Chris Froome chasing down Richie Porte before sitting up and watching the sprinters take over.

This year, Richie exited stage right as he reached the finish line… after the third of four laps in Geelong. “Too hot,” he said with a smile. Instead of the Tasmanian chasing line honours, BMC Racing had another card to play. Simon Gerrans. He’s one of those guys: a strong sprinter. He climbs. He manages his strength (and his emotions). He paces himself and knows when to jump. He’d do so again today and finish as the second Australian – fifth behind McCarthy, Viviani, Impey and Dries Devenyns.

Ahead was one of the less heralded Australians from the current crop of professionals but he’s a rider who can now call himself the winner of a one-day WorldTour race.

“Having those extra couple of people there in the final makes a big difference,” said Jay at the finish.

“We definitely had a couple of strong guys out there with [Esteban] Chaves attacking, but the big thing for me was the group coming behind.”

There had been a split. There had been attacks. There was a Colombian climber who races with panache leading onto the final straight but eventually it was the sprinters who stole the show. “As you see,” said McCarthy, “Viviani was coming in hot on my heels in the final.”

It was a long sprint but a good one for the 25-year-old.

“Sometimes it goes your way and today was my day.”

He is a sprinter and he gets the support of the best in the world. He appreciates it and recognises it with grace. “As you’ve seen last week,” he said of Sagan in South Australia, “he was still the star of the show but every time you spoke to him all he wanted to do was help me. That just goes to show how much of a champion he is.

“For me to achieve today’s result is not only good for me it’s a bit of a payback for the team.”

It is a difficult one for the sprinters to judge. It’s not a rudimentary lead-out and a surge at the finish. It’s about climbing and timing. And although Viviani came from the second group, it was a race won by the strongest in the front group of nine after a perfectly executed finale.

“I know that I can hold my power pretty well in a sprint,” said McCarthy of the finish. “There’s a little bit of a chicane in the finish with 300m to go. I knew if I could kick from there and drift it should be alright.” It was.

McCarthy returns to the cold of a European winter with something to relish on the last day of his summer of cycling.