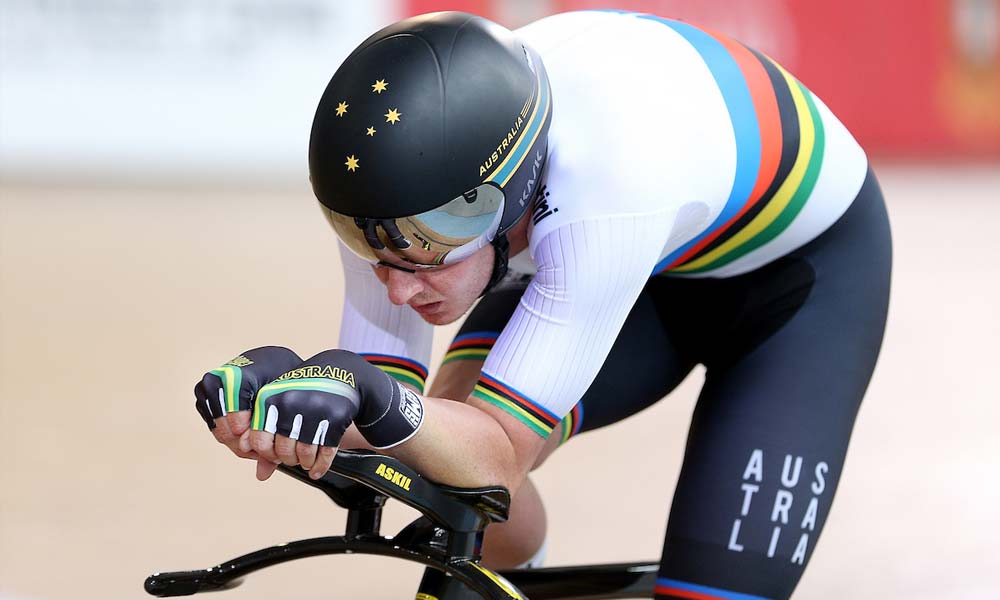 At 25 Jordan Kerby is enjoying considerable success as a track cyclist. He is one of several Australians who are winning titles at the Oceania championships this week…

Adapting to a new direction

Earlier this year, Jordan Kerby committed to switching focus from road to track racing. It was a gamble that paid off. In April he rode the third fastest individual pursuit ever. He did so in Hong Kong in qualifying at the world championships. By the end of that week he had a rainbow jersey: champion in the prestigious 4,000m event that has a considerable heritage in cycling.

The IP is no longer an Olympic event so Kerby’s shift in focus continues to evolve. Now the 25-year-old is concentrating on the team pursuit and vying for a place in the Australian teams pursuit line-up for the Tokyo Games in 2020.

Kerby is at the Oceania championships in New Zealand this week and has already collected two gold medals: first in the TP (in 3:52.421) and, the next night, first in the IP with an impressive 4:13.529!

“We’ve just gone from strength to strength this week,” he said earlier today. “I’ve been really happy so far.”

The program for the Oceania championships is much more comprehensive than what’s on offer at Olympic level and it is providing Kerby and his cohort the chance to test themselves in a range of disciplines. This week he will race both the pursuits as well as represent Australia in the omnium and the Madison where he’ll team up with fellow team pursuit gold medallist, Nick Yallouris.

“We haven’t done a Madison together yet,” Kerby said of the partnership with Yallouris but he’s looking forward to the challenge.

Kerby was a surprise winner of the IP at the worlds earlier this year but he is becoming one of a long list of hopefuls for the Aussie team for Tokyo. After two years with the Drapac professional team, he worked as a coach in Queensland and applied some of his lessons to himself. And it clearly worked.

Two rides at the nationals – where he won the IP – netted him a spot on the team for the worlds. By August he moved from Brisbane to Adelaide to be closer to the Super-Drome and, crucially, become part of the Cycling Australia high performance team. 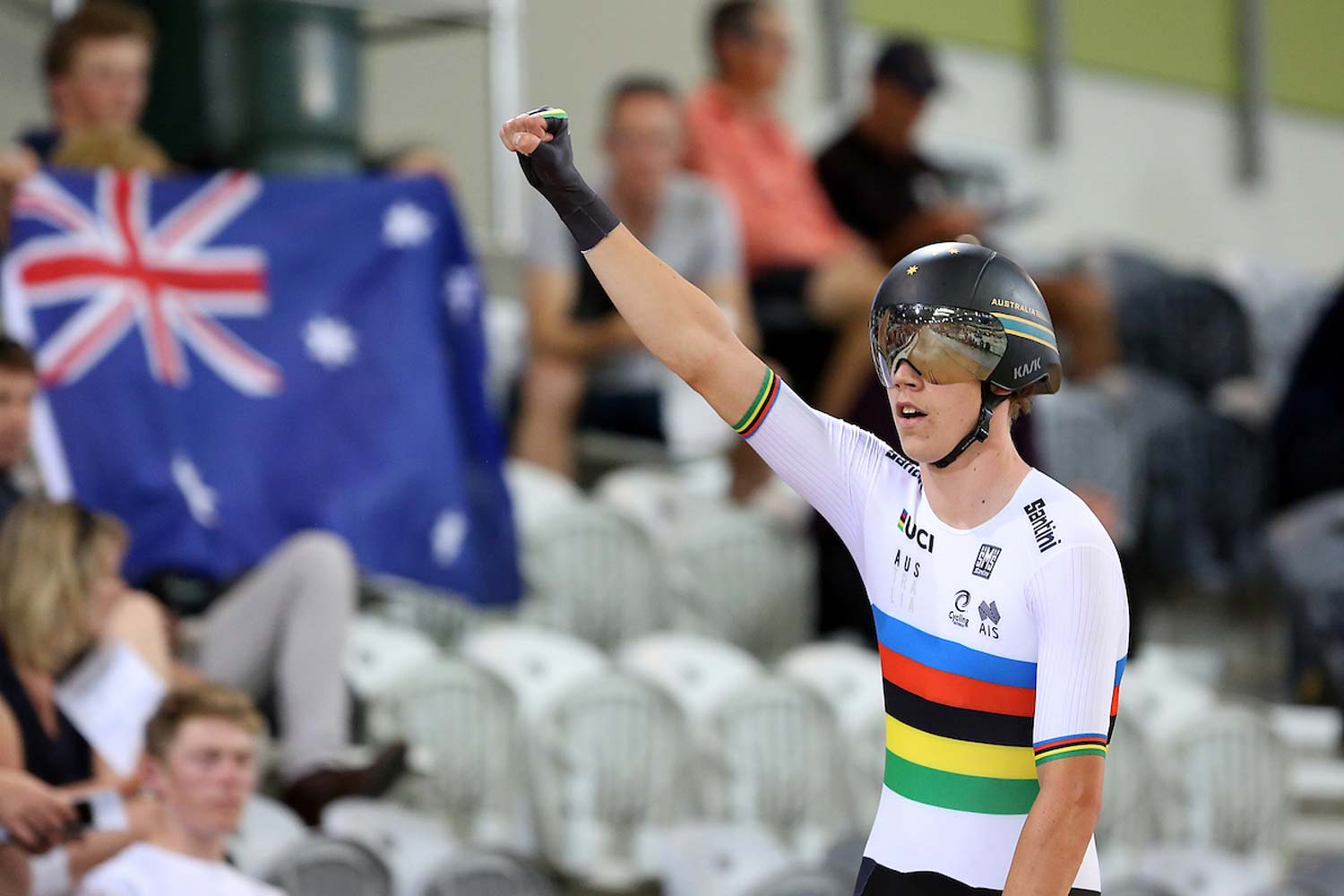 Kelland O’Brien (above) is another Australian who got to wear his rainbow jersey in action at the 2017 Oceania championships in New Zealand.

Get used to seeing his name; Kerby is ticking off objectives every step of the way and although the Oceania championships doesn’t earn much coverage, his performances in New Zealand reiterate that he is going from “strength to strength”.

“It feels good to be still in the ball park in terms of the individual pursuit,” Kerby said earlier today. But the IP win was something of a consolation; the TP is what he really wanted to test his form in.

“Predominantly, I’ve been training for the team pursuit and trying to integrate into that group and see where I stand… it was also a good trial run to see how I would pull up after doing two teams pursuits the day before [the individual pursuit].

“The teams pursuit is the main focus for me and I think we really nailed that final against New Zealand on Monday night. The boys were stoked with that time (3:52.421); we didn’t think we’d go that quick…. it ended up being the eighth quickest time ever recorded.”

Fast, efficient… first. That’s what the team – Kerby, Yallouris, Kelland O’Brien and Leigh Howard – has been training for. But that fast? It wasn’t expected.

Until Monday night, Kerby had never done a pursuit in less than four minutes. He’s now joined the growing collective who have broken that barrier. How did this eclectic quartet go so fast?

“I think what a lot of it comes down to is the smoothness,” says Kerby. “We’ve been together for a while now. Okay, I only got to Adelaide in August but with the TP focus we’ve just been practicing the line, practicing the swings – nailing it… and just getting all the basics right.

“And the basics are sometimes what it comes down to; a couple of extra seconds fighting to get back onto the wheel makes a big difference. If you do a better swing, you will just slot in there nicely. I think we did all of those things right…

There’s a long list of riders vying for places in the prestigious team pursuit line-up. This is a big focus of Cycling Australia’s HP program and it is an event that has yielded considerable success for the national team from one Olympiad to the next: first in 2004, fourth in 2008, second in 2012 and 2016…

The aim now is to break the silver hoodoo and overcome Team GB in what has developed into one of sport’s great rivalries.

While the Oceania championships are still on, let’s consider the quartet that did the 3:52 on the opening night. I asked Kerby to explain the sequence: who rode in what position?

“In the final we had Nick Yallouris starting. He is a ‘kilo man’ as well, so he’s the most suited to the first wheel out of the group that we’ve got here because he’s such an anaerobic beast.

“Then we had Kelland [O’Brien]… He’s looking to try and slot into second wheel a bit and try and become the man for that position as he gets older. He stepped up into that role really well.

“Then we had Leigh Howard in third wheel and he was motoring. He was going really well and it’s good to see him transition back into the track after so many years in the WorldTour.

“And I was coming up the rear in fourth.”

There’s a mix of youth and experience on offer for HP director Simon Jones. And he’s bringing in a few who have some dalliances with road racing at the highest level and hoping to find the right combination.

For Howard and, to a lesser extent, Kerby the move to the track is significant. For years their focus was road racing but the lure of the Olympics is difficult for them to resist. Still, it’s not going to be an easy selection for Jones as the Games in Tokyo approaches.

“You can’t just walk back into the program,” said Kerby about the transition from road to track. This relates to himself, Howard and others like Cam Meyer who has been prospering on the track recently but is also about to make a return to the WorldTour in 2018.

“I know that Leigh has made a lot of sacrifices to be here. His partner is still living in Andorra but he’s made the shift to move to Adelaide and put himself on the line and he committed to a World Cup in Cali [Colombia] last season to get the ball rolling. So you can’t just say, ‘I don’t want to be a road pro anymore…’ and jump on the track; you actually have to take the initiative and do some of it yourself and put your name back on the board before you can come back in.

“You’ve got to be serious about it.

“You now put your name down, you try, and you get some results and then you get a look in. And that’s exactly what Leigh and myself have done.

“We’re serious about it and we want to be here. And we all want that common goal of a gold in Tokyo so everyone is fully committed to it.”

The work that has been done since Kerby arrived in Adelaide is considerable but it’s also a contrast to the training program he’d essentially written for himself in the lead-up to the world championships earlier this year. There’s the refinement in riding in formation that he referenced earlier but also considerable gym work and, of course, changes to position to get the best aerodynamic advantage.

“If you have a look at where my arms are sitting in that individual pursuit, you’ll notice that my arms are different,” he said, when asked about the developments after wind tunnel testing.

“The teams pursuiters [at the worlds] in Hong Kong had those bars that I’ve got on for the Oceania championships. They are just a bit of a better bar so you can get your head down a bit lower and get into a more ‘slippery’ position.

“They’re doing a lot of work with aerodynamics and positioning and all of that kind of thing at the moment and I think it all does make a difference.”

Can he feel the benefits on the bike or is it just the race times that explain the progress?

“I don’t know yet… because when you move into these different positions it takes time to adapt and I’m still adapting to it.

“I don’t know at this point in time whether it’s actually faster.

“I’m hoping, down the track – once I’m fully dialled in and I’ve done six months in this position – that I can generate the same power that I could in my old position.

“I’m not a 100 percent sure of the data, wattage wise, but I do think that I was faster in Hong Kong in a less aero position so I still think there’s work to be done for me to go faster.

“I do think I’m a little bit more aerodynamic but I’m probably lacking some watts in the individual pursuit in this new position at the moment.

“If we had two rides in the two positions when I’m in exactly the same form and we could tell what was quicker then that would be the ideal scenario.”

We wait with interest to see what comes from the next chapter of Jordan Kerby’s cycling career and we offer some applause for what he – and the rest of the Australian team – has achieved in the opening days of the Oceania championships.

Track cycling is an interesting art. It is the focus of Cycling Australia’s HP unit. And there are lessons from the elite program that can be passed on to other cyclists.

The Oceania championships conclude in two days. And, for Kerby and others from the Australian team, the next major focus will be the Commonwealth Games in Queensland next April.

“I think it’s very important and I think it’s a good thing that we have as Australians; to be able to compete in the Commonwealth Games. For us, in track cycling, it’s bigger than the world championships…

“It’s good to have that hallmark event in between as a bit of a dress rehearsal; put all the processes in line and try to nail them. And then afterwards, I guess, you see the changes you need to make. ‘What could we have done better?’ ‘What did we do well?’ And take those lessons into the next two years.”