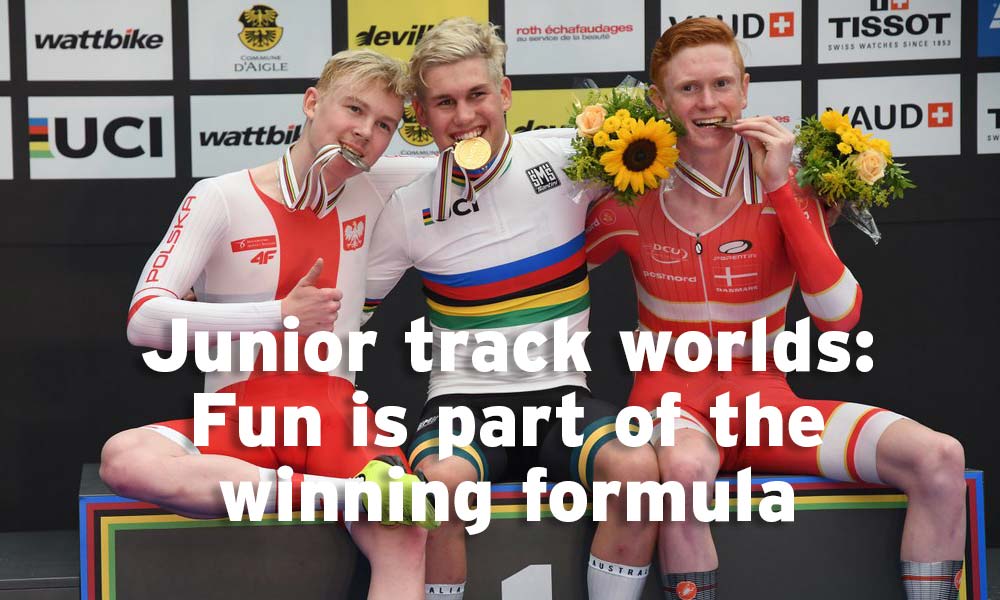 What is it again? ‘It’s not the result, but the process that matters.’ I’m not sure if that’s a recognised quote or if it’s credited to anyone but it sure comes up often enough when we talk about sport. And we should remind ourselves of it regularly. Yes, it’s nice to score a few wins along the way but that’s not really what cycling is all about. If you enjoy your riding, then triumph is more likely to follow. Make it fun and let the rest of the process take care of itself.

Victories help give people reasons to throw their arms in the air. They also allow people to state that they are better than others. And, at the end of another junior world championships, there is a collective of young Australians who can say that they are the best in the world… in their age division.

To all those who wore the Australian Cycling Team colours in Aigle, Switzerland these past few days: congratulations!

The junior worlds netted a host of conquests from young Aussies including:

In time we’ll know more about the strengths and weaknesses of the likes of Tom Cornish, Luke Plapp, Sarah Gigante, Blake Quick, Alice Cunning, Alexandra Martin-Wallace and Sophie Edwards… to name a few.

For the purpose of this overview, however, we turn to one of the men who is helping the juniors at the Brunswick Cycling Club understand the art of track riding, Dave Morgan. He tells some of the stories that led to some of the successes that have been achieved in Switzerland these past few days.

Morgan tells a good yarn and he began his little overview of what happened at the junior worlds by explaining that it’s not just because of good training that some of the young riders from the club have become world champions, rather it’s because of fun.

“What we encourage,” Morgan says, “is riding for fun.”

That’s the main aim of the process and, he says, everything else follows from that. 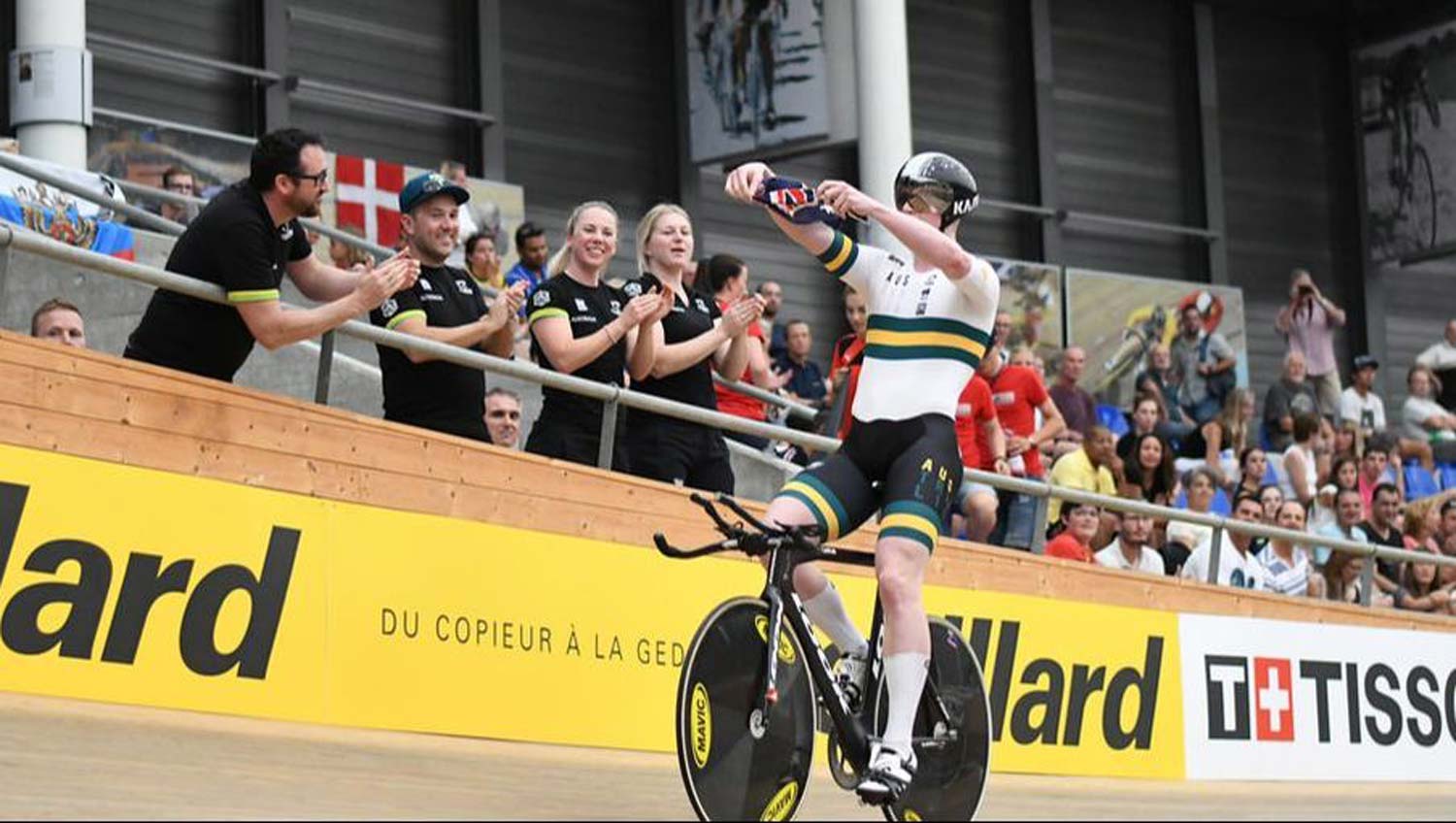 “It’s not really gloating,” says Dave Morgan from the Brunswick Cycling Club when asked to talk about the junior worlds. “It’s more to do with pride: that the work we do with the kids gets them to shine and show their best.”

He’s full of praise for the three from his club who had achieved good things at the worlds, including two medallists: Luke Plapp (points race and Madison world champion), and Sarah Gigante (points race silver medallist) but he won’t be drawn into saying that the club is turning good riders into world champions. He sees things a different way.

“Uhm,” he laughs, “it seems like a culture [but] we like to call it ‘luck’ because we don’t have an actual set plan of what we do with the kids because every child is an individual.

“It’s more about trying to make it inclusive for everyone, no matter if they are – now we’ve got one – a world champion kid, or just an up-and-coming kid in the junior clinic who might be only five years old.

“We just try and teach them the same and give them the ability to get the best out of themselves.”

When we started talking he spoke about the concept of fun being the main impetus. This is something that is often lost in sport so how does Morgan and his cohort, particularly Cam McFarlane, manage to do that – and how does fun turn good bike riders into world champions?

“Occasionally we might send them backwards around the track,” says Morgan, “that is something to try and unwind things a little bit.

“We make it very inclusive. We do a Saturday session during summer and we always run Madisons during those sessions and partner a senior with a junior. You might have a 50-year-old bloke who is riding as a team with an eight-year-old girl.

“The little ones get just much fun out of having this big bloke throwing them in for a sling because they get to go so fast.

“And the older riders get to see the enjoyment the kids have just by riding their bikes.

“I think even some of the seniors sometimes forget the fun you can have just riding your bike with your mates.”

There’s a lot that can be said for the benefits of fun.

Ultimately, it’s great that we can be proud of what’s just happened in the last few days with a few world titles and the like but what Sport Australia is now trying to do now is to ‘Get Australia Moving’. That’s this new catch-cry that’s come out of the government’s initiative with sport, and that’s what’s happening at the Brunswick Cycling Club.

“Yeah,” agrees Morgan, “we’ve got a whole lot of groups now. One we started about three years ago called ‘Melburn Hurt’  which was a bunch of girls who wanted to try and learn track cycling and one of the riders was a very accomplished rider on the road. We got her a coaching accreditation and just gave her the support to actually run a group herself. She’s now got nearly 50 girls in a group.”

There are a range of initiatives from the club in Melbourne and I asked if Morgan could summarise how someone new to cycling might get involved through what the Brunswick Cycling Club is doing.

“We’ve run the junior clinic since 1956; Henry Hill from Hillman Cycles actually started it. And we run that over summer every weekend, every Sunday from nine o’clock until about 12 o’clock. With that, any child can come along; they don’t need any equipment at all.

“We supply bikes, helmets, and we sign them up just on a junior licence – which is the cheapest, so it’s not a race licence – and we teach them to ride track.

“The only criteria that they have to meet is that they can ride a bike without training wheels.

“I think the youngest we’ve had so far was three and a half years old. And that kid is still racing now as an under-13.”

“Luke was a young kid who was always ‘thereabouts’, that’s how we like to call him. He was always up there in the sprint but just never seemed to have that much luck. And he decided that he really wanted to train hard and become focussed on the Oceania championships on the road two years ago, which was his first year as an under-19, playing with the big boys.

“His main goal was the time trial and I think he was 350 metres from the finish line and he snapped his chain. So he picked his bike up – because we teach all of this – and put it over his shoulder and ran to the finish line. You need your bike as well to record a result.

“I think he was fourth of fifth place by something like 20 seconds.

“So, it was just devastating because he knew it was in there and he knew he would have been there but: no chain, no go – no matter how fast you push the pedals.

“He tried to put the time trial behind him, and concentrated on the road race. Not long into the road race, at a bridge, someone slipped off in front of him, knocked his wheel, and he broke his collarbone.

“So, this great big thing that he’d been aiming at for nearly a whole year was completely wiped out on him.

“He showed up a couple of weeks later at a Thursday night, we do a motorpace session down a Brunswick for three hours. He was totally devastated and just said to me and Cam McFarlane (another coach at the club) that he really wasn’t interested in racing anymore.

“So, us being thoughtful young men, we said, ‘Could we have a look at your licence?’

“He handed it over and we just cut it up.

“And we were like, ‘Well, you don’t need a licence to ride your bike. The motor bike is warm, let’s go – we’ll go for a motorpace session…’

“He ended up just coming along on the Thursdays, riding around with his mates for three hours, then took up some extra sessions with Cam out on the road. And he turned around about six months ago and said, ‘I want to race now.’

“Cam was like, ‘Well, your licence is still valid. Get another card and let’s go.’

“He ended up winning the Australian time trial championships on the road and got asked to go up to Brisbane to do the track – which he hadn’t really been racing much of – and won a couple of medals up there, which got him onto the Australian track team… and the last three days has just been absolutely phenomenal.”

Dave Morgan and I conclude our impromptu chat about the successes of the Aussie riders at the junior track worlds. Well, I tell him, congrats for your part in the success of what’s gone on. Like they say, it’s not about the result it’s about the process – and it looks like your teaching that well. That’s something you ought to be proud of.

“Young Sarah Gigante caused a major upset at the AIS,” he says, offering one more anecdote before providing his conclusion. “They took all the kids over there for a training development program before the worlds and Sarah hasn’t had a coach for two years.

“At the national titles on the road, she won the criterium, the time trial, and the road race.

“She won all three of those without having a coach.

“Everyone says, ‘Well, how can you ride and race so well without a coach?’

“She just loves riding her bike. And it wasn’t about having a coach giving her all these different exercises or reaching a power number. It was all about just ‘Getting on my bike and racing my mates…’”

And that’s what it boils down to: having a bit of fun.

“Of course, she was announced as being part of the junior worlds team and I think it was about a week later – or two weeks later – just at a local race, someone came down and she went over the top and crashed: and broke her elbow.

“A week after she had an operation on the elbow, her mum tied her up with a ladder across the tables so she could sit up with an ergo with her elbow on a pillow. She only got back on the bike maybe a month and a half ago. And she’s ended up second in, I think, one of the hardest races: the points race, after putting up with all that in the last three and a half months.”