After three weeks of watching La Vuelta a España, it’s finally time to write about a race that provided plenty of entertainment – and a good dose of cycling inspiration at exactly the right time. 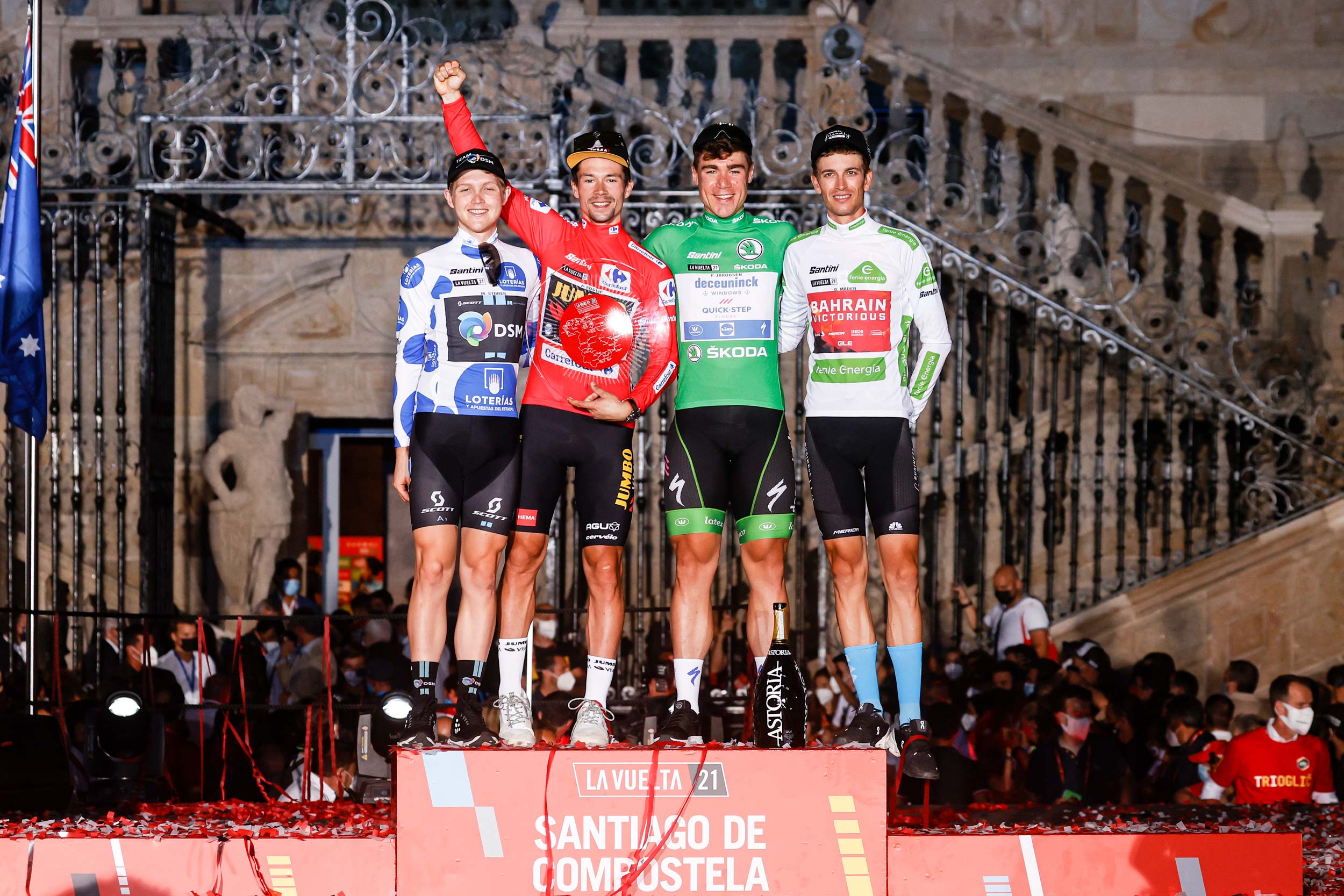 Michael Storer and Jack Haig both appeared on the final podium of La Vuelta a España 2021: King of the Mountains and 3rd on GC, respectively, the two Australians came of age in the last three weeks. (Photo: Luis Angel Gomez, via ASO/Unipublic)

Jack Haig and Michael Storer had quite a race. Third on GC in a Grand Tour, and King of the Mountains in Spain, respectively – they are two remarkable results. And yet, this is the only reference to the pair on this site for the entirety of the Vuelta a España of 2021. To these two Aussie cyclists, I say sorry.

Please forgive the lack of coverage by RIDE Media of formidable performances by riders who deserve a lot more credit for what they’ve just done, and yet circumstance led to a silence that feels awkward to try and explain. The quickest summary possible for the lack of reporting on #LaVuelta2021 is: lockdown.

The pandemic provided an opportunity to witness the efforts of Jack Haig and Michael Storer, no matter how late in the day the race was on the tellie in Australia. This is a time when work commitments can easily be shifted to suit obtuse hours and so if you wanted to watch the Vuelta live until the usual stage finish around ±2.00am (AEST), you could. Or, if the late-night/early-morning on the lounge didn’t suit, there was always the replay option via SBS On Demand.

The coverage by SBS – live on our screens day after day for three weeks – was a treat for cycling fans on the other side of the world, unable to travel but still able to see all of the action. As is often the case with La Vuelta, there was certainly plenty of excitement and a wealth of highlights that emerged over the three weeks.

From the saddle of my bike, stuck on the home trainer for 12 weeks (and counting), it was a daily pleasure to see the efforts of Jack and Michael. The stories created on the roads of Spain were of resilience and determination, of commitment and achievement. 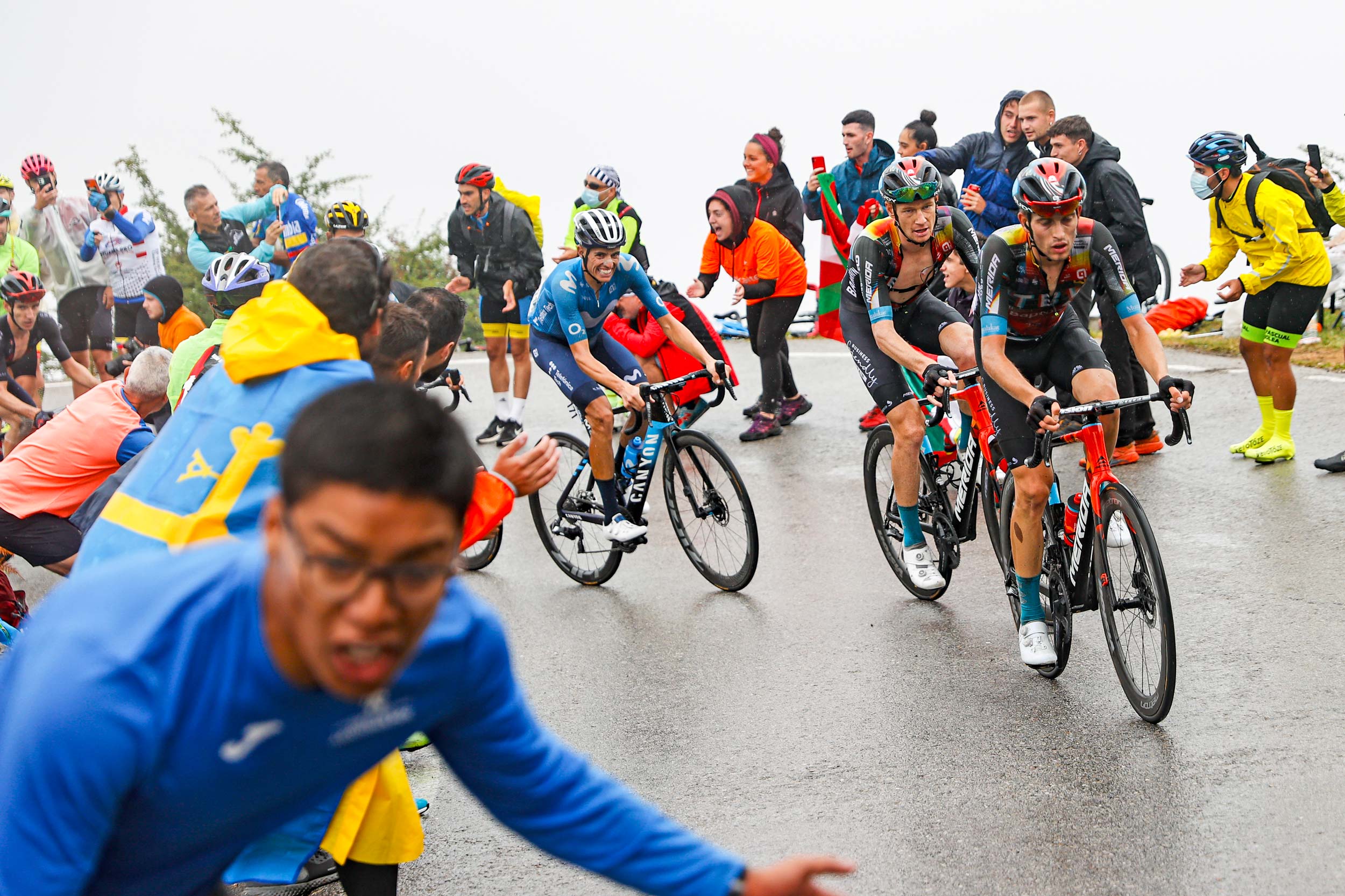 Jack Haig became the second Australian to finish on the GC podium of the Vuelta. Photos: Luis Angel Gomez (via ASO/Unipublic)

These two riders are fantastic ambassadors for cycling in Australia, but it’s not until now that a word has been published on RIDE Media about the 76th Vuelta. Twelve weeks of lockdown, it seems, can force a change in habit.

Now that the race is over and their positions in the rankings sealed, it’s a time to reflect and explain that – despite the silence – there is considerable admiration. 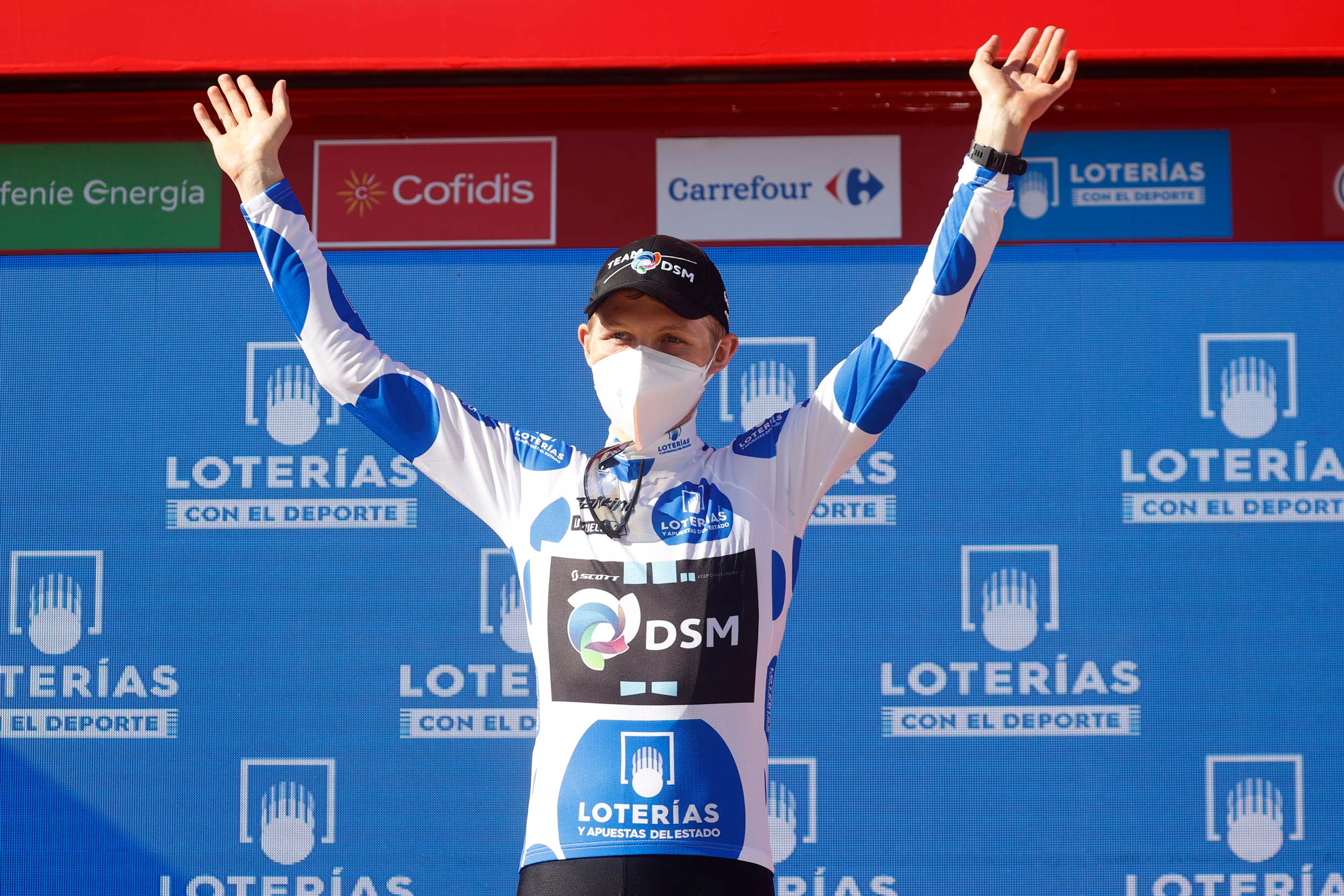 Micheal Storer is the second Australian rider to win the polka-dot jersey at the Vuelta a España. (Photo: Luis Angel Gomez, via ASO/Unipublic)

For 30 years, I’ve been reporting on bike racing, with a focus on the progression of Australian riders in the elite realm and yet – this time – I just couldn’t conjure the words to relay my observations during the race. Instead of writing about Jack Haig’s ride to third place overall, or Michael Storer’s two stage wins and his impressive accumulation of points for the polka-dot jersey, I just watched.

Day after day, stage after stage, week after week, they raced and – thanks to SBS and the network’s strong commitment to cycling – we got to see the action. I confess, only on a few occasions did I stay up late and watch it live; la Vuelta’s timing isn’t ideal for the Australian sports fan, but the full stage replays provided by SBS offered a great distraction to the monotony of hours and hours of riding on the home trainer.

I watched every stage but usually did so while riding a bike inside each morning, with FulGaz on one screen and the Vuelta on another.

The lockdown has forced many changes in routine and riding while viewing racing has helped me manage the strain of a rotten time in Sydney. That’s my excuse for not reporting and it’s a feeble one that I don’t need to explain, but I’m doing that anyway, even if it’s just to clear things up in my own mind.

Writing about cycling is what I’ve done for more than half my life. But I broke that habit in the last few weeks. This time, for La Vuelta of 2021, I watched… and refrained from making any comment, writing any report, or even making any mention of the race on social media.

Now that it’s all over for another year, I lament my silence.

The lack of coverage isn’t about apathy, or a lack of interest. It is simply a case of not being in the right place (or, sometimes, the right headspace) to explain the significance of Haig being the third best GC rider in the final Grand Tour of the season, or of Storer being the best climber in arguably the most mountainous of all Grand Tours.

There were no reports but, Jack and Michael, it was remarkable to watch what you did in Spain. Congratulations to you both: bravo for your effort and your successes – and thank you demonstrating that persistence, strength, composure and even a little bit of luck can yield huge rewards.

Both riders know what they have achieved over the past three weeks and they deserve a lot more coverage for what they’ve done, but neither seems like a the type of guy who craves adulation. They ride because they like cycling; they also just happen to be very good at it. Results follow and if they get media coverage for their efforts, great. If they don’t, so be it.

They aren’t going to worry if I write about them or not. Chances are, they wouldn’t even have noticed. They had other things on their minds. In 2021, that’s the case for many of us. As much as I love cycling, it isn’t always necessary (or possible) to relay my enthusiasm to those who tune into ridemedia.com.au.

In time, I hope, there’ll be a chance to talk to Jack and Michael (and others who featured in the Vuelta of 2021) and understand the emotions that an amazing three weeks of racing conjured. Right now, however, there’s no longer a need for race reports – as they’ve been written by many who were there, in the heat in Spain witnessing what was indeed another fantastic Grand Tour. Instead, it’s an opportunity to express appreciation for their efforts and to belatedly say: Thanks guys, you gave us some great sporting moments at a time when we had very little to celebrate!

There might not have been any words written about La Vuelta on RIDE Media until now, but that doesn’t mean I wasn’t watching. 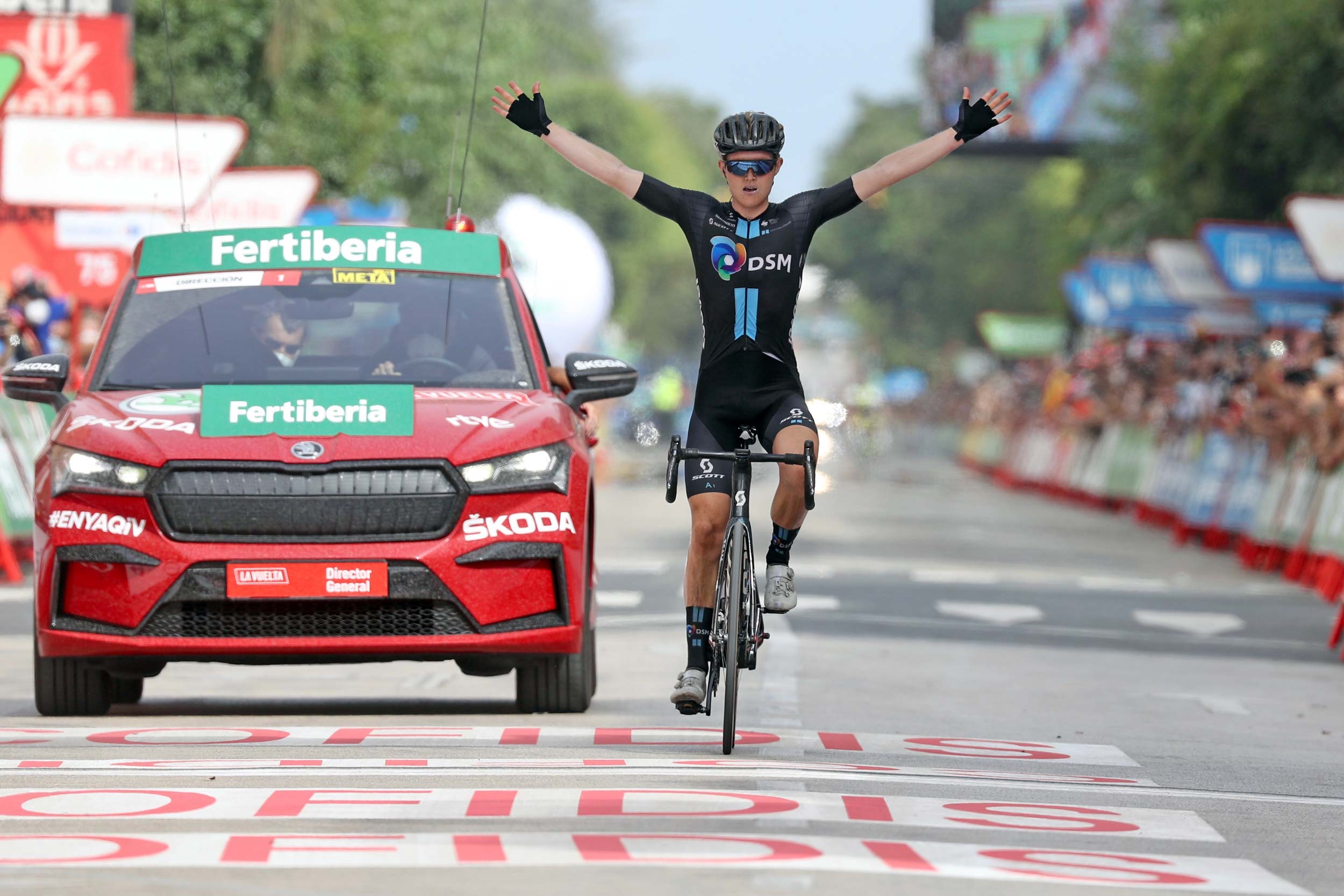 For me, this time, it was entertainment rather than my job. The Vuelta is one of the races that originally drew me to pro cycling. It is usually a compelling contest but it’s also a race that I’ve never attended in person, so it’s hard to feel as connected to it as other events – like Le Tour, in particular – that have very much become part of my professional life.

This year, the Vuelta became much more than just another Grand Tour. It was a showcase of cycling at a difficult time in Australia. On a personal level, it was a race that gave me something to look forward to each morning when I clipped into the pedals day after day on a bike without a rear wheel. It gave me something to watch while I got my exercise inside. And, as fascinating as it was – on so many levels – it felt okay to just be an observer.

I craved distraction from the reality of being in lockdown in a city where the COVID infection numbers continue to grow at a frightening rate, and the Vuelta served me well. Making it even better for me, as a proud Australian, was the vision on the screen of compatriots performing at the highest level.

Now it’s all over and we shift our focus to what comes next: the world championships in Flanders and the next stanza of cycling competition. There’s always something to look forward to, even at a time when there’s confusion about what tomorrow may bring. And cycling continues to inspire me despite not being able to ride where and how I’d like.

Jack and Michael, thank you. In time, I hope we can discuss the events of the past three weeks. For now, however, please know that your efforts weren’t ignored.