The mountains are behind the peloton, Paris is on the horizon, and there’s an Australian in fourth place in the Tour de France. With three days to go, many are asking: can Ben O’Connor finish on the GC podium? 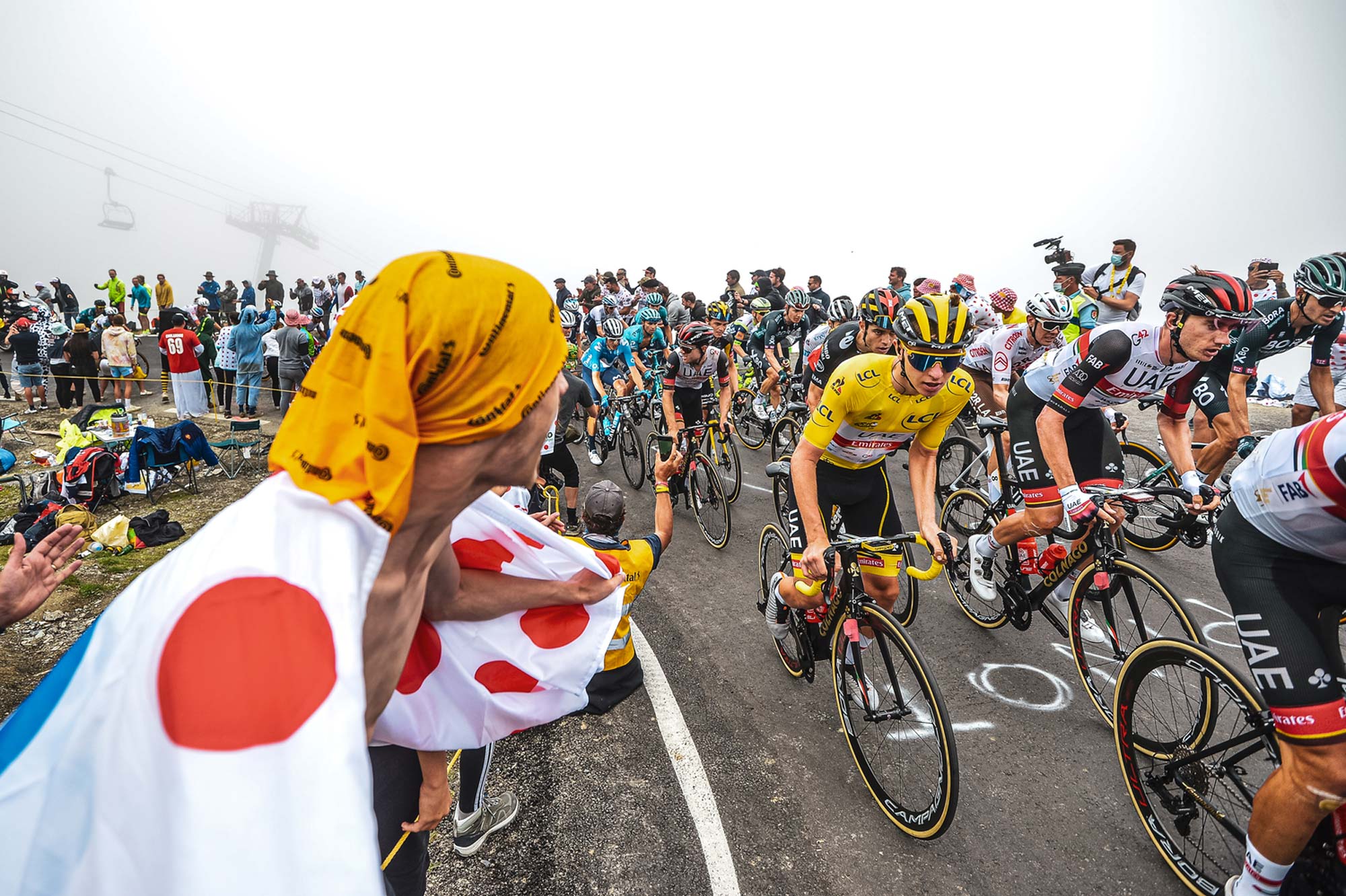 Tadej Pogacar, the winner of three stages in Le Tour of 2021 – including two in a row while wearing the yellow jersey in the Pyrenees. (Photo: Charly Lopez, ASO)

Luz Ardiden was the setting for Tadej Pogacar’s third stage win in the 2021 Tour de France, his second while wearing the yellow jersey. The difficult finish of stage 18 yesterday also provided Ben O’Connor the opportunity to rise up to fourth place in the GC rankings with another powerful and considered display of climbing.

The Slovenian leads the 108th Tour de France by a dominant margin. Unless he crashes, or suffers some unforeseen setback, Pogacar will win the race for the second successive year.

O’Connor, meanwhile, jumped from fifth to fourth overall with his eighth place on the final mountain-top finish of this year’s Tour. Only 34 seconds behind Pogacar at Luz Ardiden, he continues to impress on debut. It would be remarkable if he could make up the time needed to reach the podium but, with a time trial still to come on Saturday, he can dare to dream.

Until now, the West Australian has only had a few bad moments during his first Tour de France: that incident on day one which earned him 10 stitches in his arm, a couple of lapses last Wednesday over the Ventoux… and then a few lost seconds during the incursions through the Pyrenees. O’Connor must be proud of what he’s already done and for the TT on the weekend, there’ll be oodles of encouragement from Australian fans. 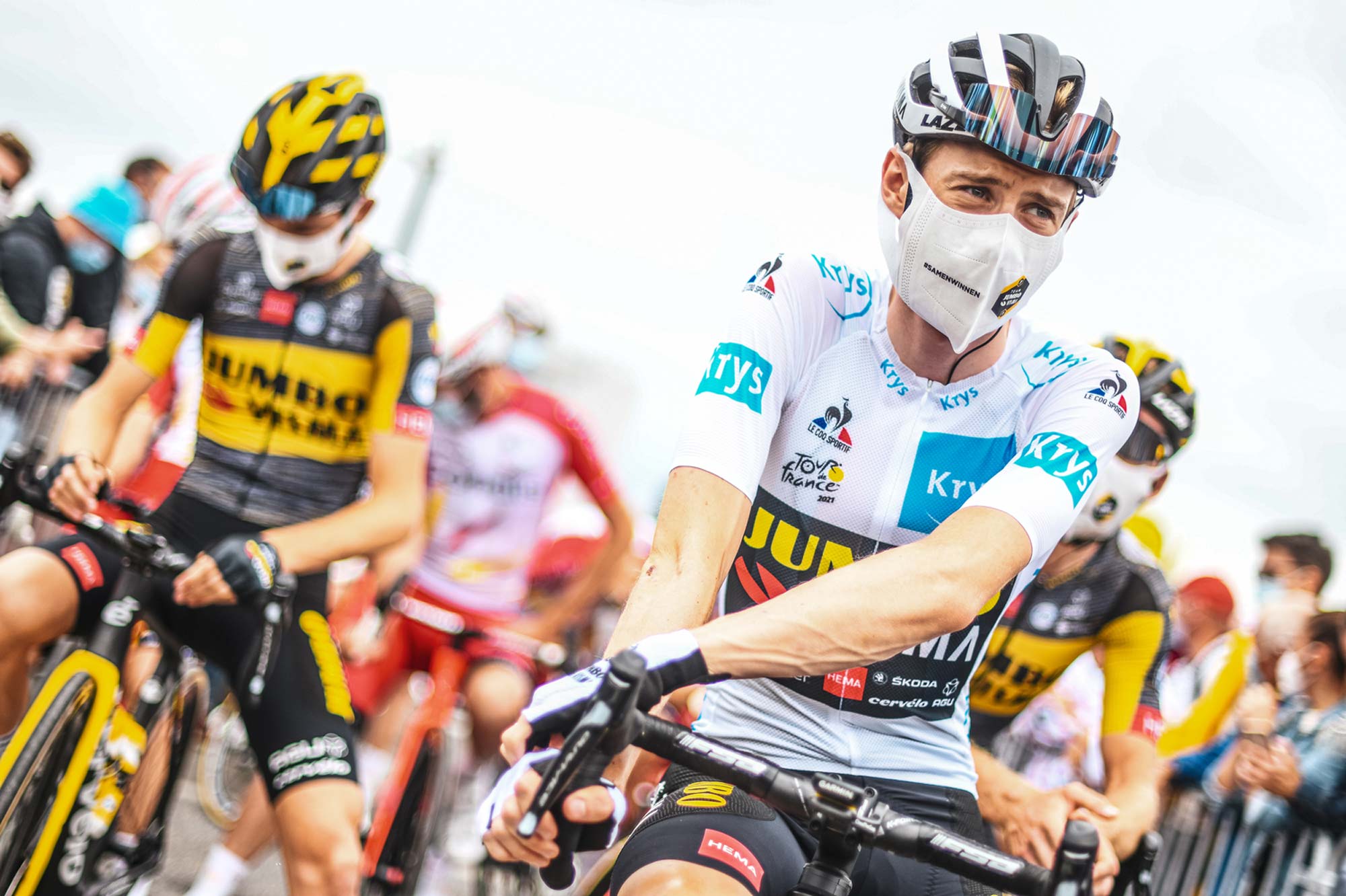 Jonas Vingegaard has enjoyed an amazing first Tour de France. He can climb, he can time trial… he is ranked 2nd on GC and is poised to be the runner-up in 2021. (Photo: Charly Lopez, ASO)

Cheering from afar won’t help O’Connor extract time out of Jonas Vingegaard or Richard Carapaz, the Danish and Ecuadorian riders who hold the minor podium places after 3,068.2km of racing in the Tour of 2021. Still, in loungerooms around Australia, fans in lockdown will be urging Ben on, hoping that the numbers in the top corner of the screen will show him racing towards a podium place.

With only 346.2km and three stages remaining, it’s the 30.8km test in the vineyards near Bordeaux that will provide the setting for Ben O’Connor’s final challenge for the podium. He is behind Vingegaard by 2:33, while Carapaz’s advantage is 2:27… that’s a lot of time to make up – a huge challenge, but so too is winning a mountain stage of the TDF by over five minutes. 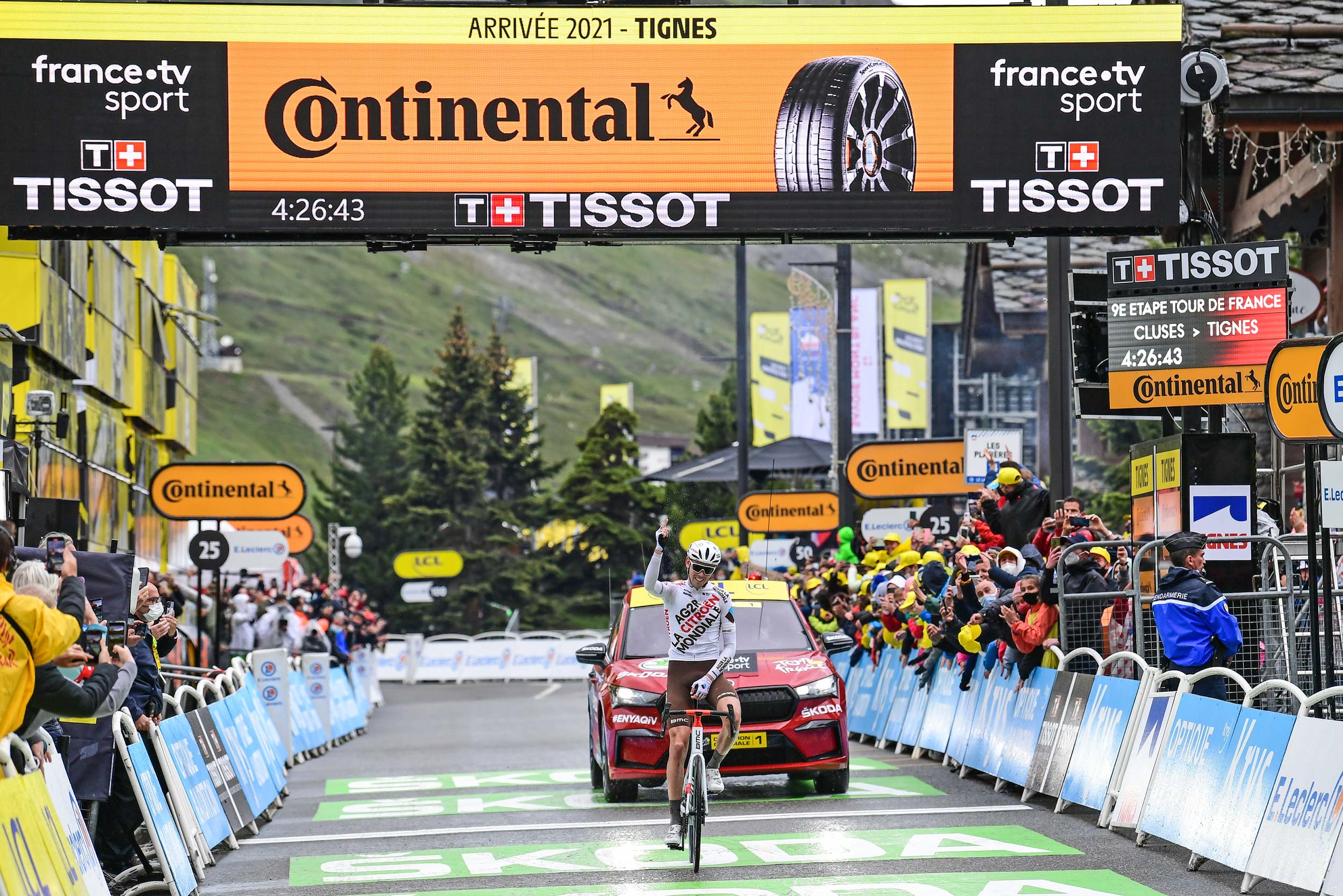 After his stage win at Tignes O’Connor moved up to 2nd place on GC. (Photo: Pauline Ballet, ASO)

O’Connor has achieved amazing things already. He’s done in one Tour what no Australian before him has: win a stage on debut, and 10 days (and counting) in the top six on GC with only three days to race.

There’s been a TT already in this year’s Tour and although the setting and circumstances are entirely different, there’s still a compulsion to do the time checks. How did O’Connor fare against his phenomenal Danish rival from Jumbo-Visma and the Ecuadorian leader of the Ineos Grenadiers?

And that’s when the reality of the situation sinks in. O’Connor is good against the clock… but the others have been better.

In Laval, over 27.2km, O’Connor placed 31st in 33:56… but Carapaz was 23rd in 33:44, and Vingegaard – that amazing climbing sensation who is also making his Tour debut – well, he’s also a wizard against the clock. The rider who has been the caretaker of the white jersey (while Pogacar wears yellow) was third in the TT of stage five.

Last year, it was the TT on the final Saturday that propelled Pogacar into the race lead. It was also an entirely different race than what we can expect on the road to Saint-Emilion this weekend. A brutal uphill to La Planches des Belles Filles provided the ramp for one of the most dramatic stages in years, a Slovenian battle for supremacy in which youth got the better of experience.

The profile for stage 20 this year looks absurdly tame in comparison. It’s undulating, they say. There’s a “mini hill” near the halfway mark. And, unlike Laval, it will be raced with legs made weary by many mountains and a fortnight more of excursion during the Big Loop of France. 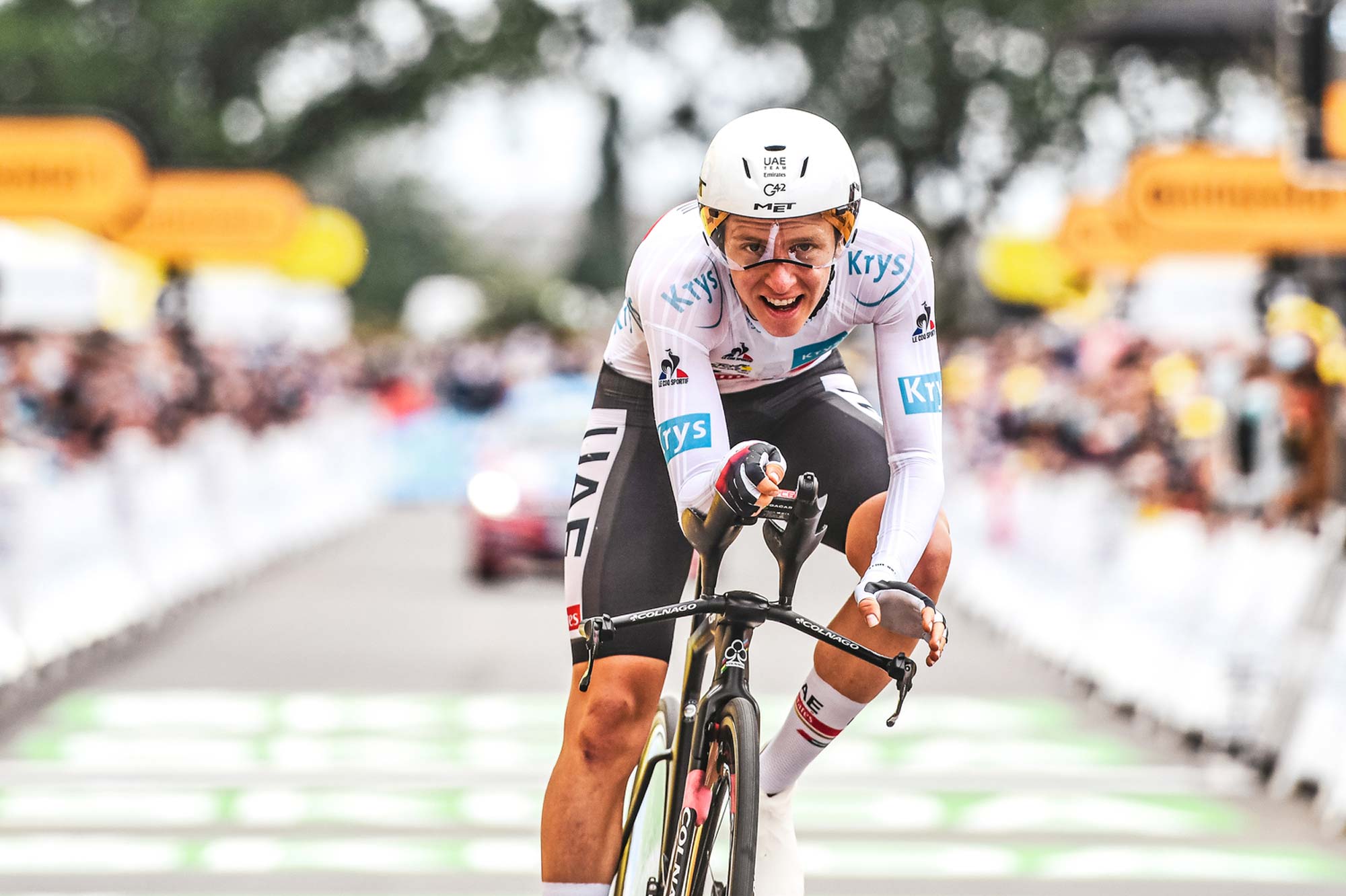 Pogacar won the first of his three stages (so far) in the Tour of 2021 in the TT of the opening week. (Photo: Charly Lopez, ASO)

If/when Pogacar wins the Tour on Sunday, it’ll have been 300 days exactly since his triumph at La Planches des Belles Filles, the shortest span between victories in the history of the Tour de France.

It was an autumn race last year, and the Tour returned to summer in 2021. Different, but same. Before stage 20 in September 2020, an Australian was ranked high on the GC and a podium position was within reach if he had a good TT. Richie Porte extracted everything out of himself and he excelled on the steep gradient, finishing third (1:21 behind Pogacar, and only a fraction of a second behind former TDF runner-up, Tom Dumoulin).

It was the TT on the final Saturday of 2020 that elevated Richie Porte from fourth to third, making him only the second Australian in history to finish on the GC podium of the Tour de France. At the start of stage 20, Porte was 1:39 behind the rider ranked third overall (Miguel Angel Lopez), less than what O’Connor needs to make up in stage 20 this year.

The comparison is arbitrary but it does illustrate the challenge that O’Connor faces to rise up one more place in the rankings; to jump from fourth to third is a huge undertaking, and if it happens it would be an enormous conquest for the debutant.

O’Connor doesn’t need to stand on the Parisian podium to confirm his pedigree, he’s done that already by racing an amazingly astute race with panache and daring. He has proven that he is a true GC man in an era of remarkable riders. And he is only just beginning his Tour de France journey.

There are just 346.2km to go, roughly 10 percent of O’Connor’s first Big Loop. It has already been a summer for Ben O’Connor to remember. He has landed on Planet Tour and his presence has been felt. He doesn’t need to stand on the podium to be worthy of applause.

O’Connor has indeed become a ‘GC guy’. The next time he contests the Tour, he’ll be added to the list of favourites. In the race we have seen his qualities as a rider. Outside of the race, we appreciate his grace as a person: good humoured, humble and happy. He’s easy to cheer, which is lucky because it’s something we’ll be doing for a few more years yet.