Michael Matthews is in with a chance of winning a second green jersey at the Tour de France. Could he? It is theoretically possible. Will he? The final weekend will reveal all… 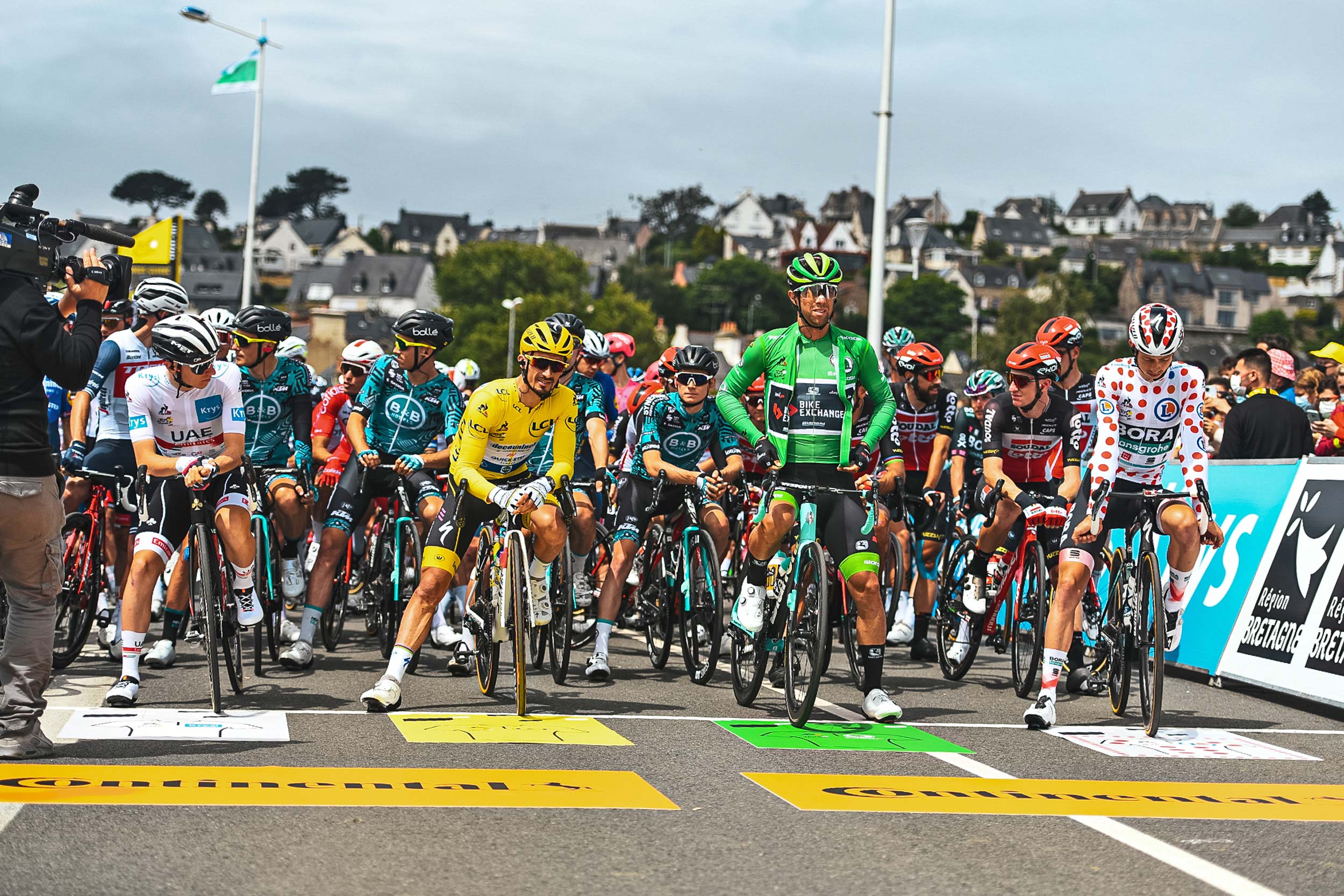 Michael Matthews was 2nd in the opening stage of the 2021 Tour de France. He earned a day as caretaker of the green jersey. (Photo: Charly Lopez, ASO)

So, three stages to go. There are intermediate sprint points on offer in two of those, and a couple of bunch sprints possible. Sandwiched in between is the TT on Saturday, when neither Mark Cavendish nor Michael Matthews is expected to score points.

What’s this add up to? A tense few days for two riders who have previously won the green jersey at the Tour de France.

After 18 stages, Cav continues his fairy tale Tour: four stage wins, over two weeks as leader of the points classification, and a record-equalling romp that no one ever expected to happen.

There’s no need to repeat it, you know the story… but, for the purposes of this piece here it is one more time: Cavendish shares the record of stage wins at the Tour de France with Mr Eddy Merckx. Thirty-four! (It deserves to be spelled out and italicised. It is remarkable.)

What now? Could he put the cherry on top – a green, candied cherry, one that tastes so sweet it’s hard to digest? 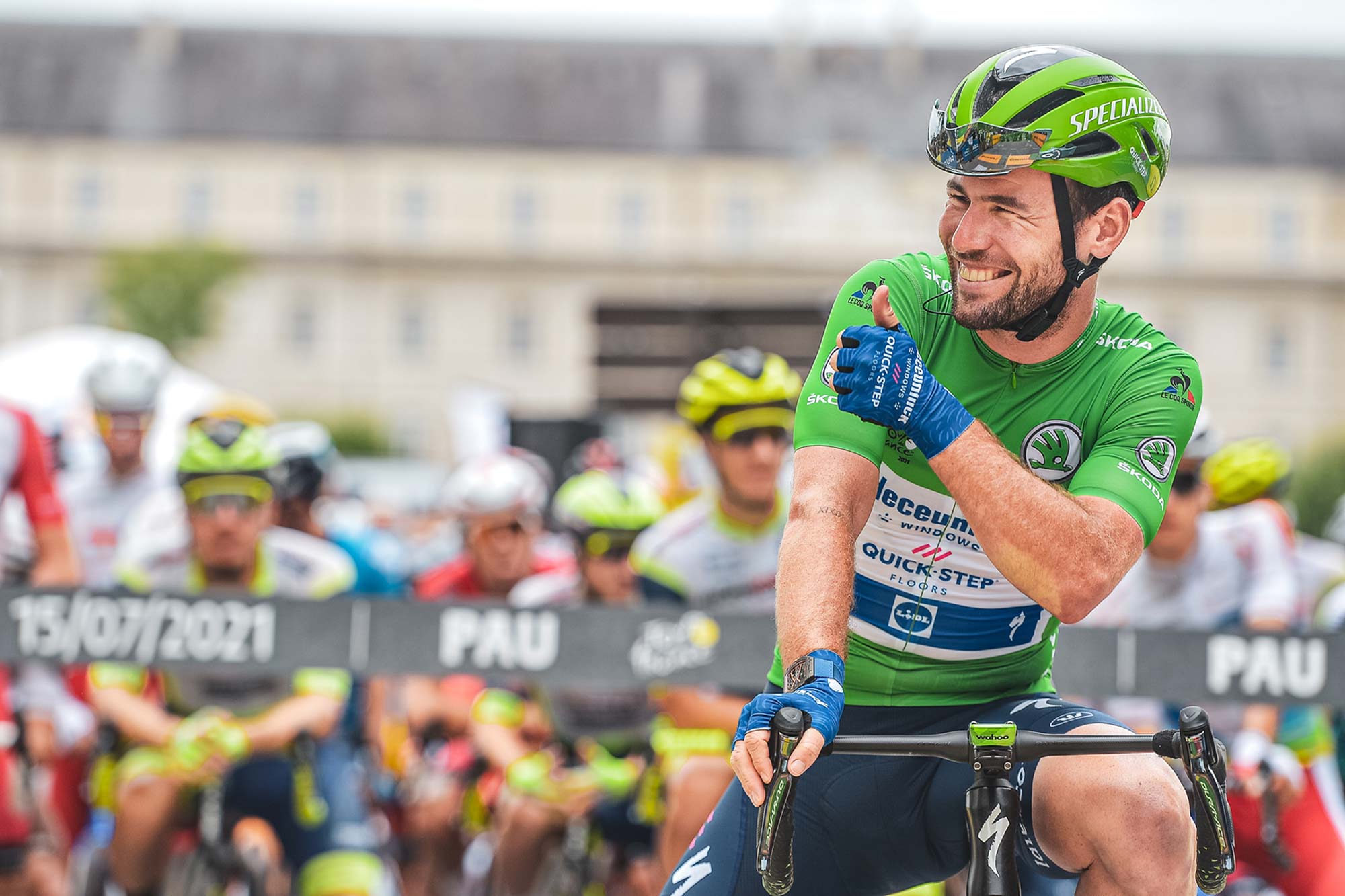 Cavendish has worn the green jersey since his first win in stage four of the Tour of 2021. (Photo: Charly Lopez, ASO)

Before the Tour de France of 2021 no one expected Cavendish to even be on the start line. And ever since that surprise selection was confirmed he’s been hogging headlines by doing what he’s done for well over a decade. He wins sprints. He does it here, he does it there. He did it then, and he’s still doing it now.

He has a team that’s absolutely committed to the record-breaking cause, but only those very close to Cav would mention the words ‘Merckx’ and ‘record’ in the same conversation. Yeah, yeah, yeah… he was close, then he got closer, and closer – and then it happened. He reached 34. It’s logical to talk about 35 but do so with Cavendish in the room at your peril.

He doesn’t take kindly to comments or questions about records.

“It’s something every rider dreams of,” he adds as a follow up. And he’s gone through those motions time and time again… (x 34).

Now, what’s he want? The green jersey. (Oh, and another stage win would be nice too, but let’s not go there. Not yet.)

What’s he likely to get? The green jersey. It seems to be written in the stars: four stage wins, fastest in all but one bunch finish, and Paris on the horizon. Cavendish has amassed a stunning collection of 298 points in 18 stages. And he’s survived the punishing mountains. Winning a second green jersey (backing up the one he claimed in 2011) seems his destiny. 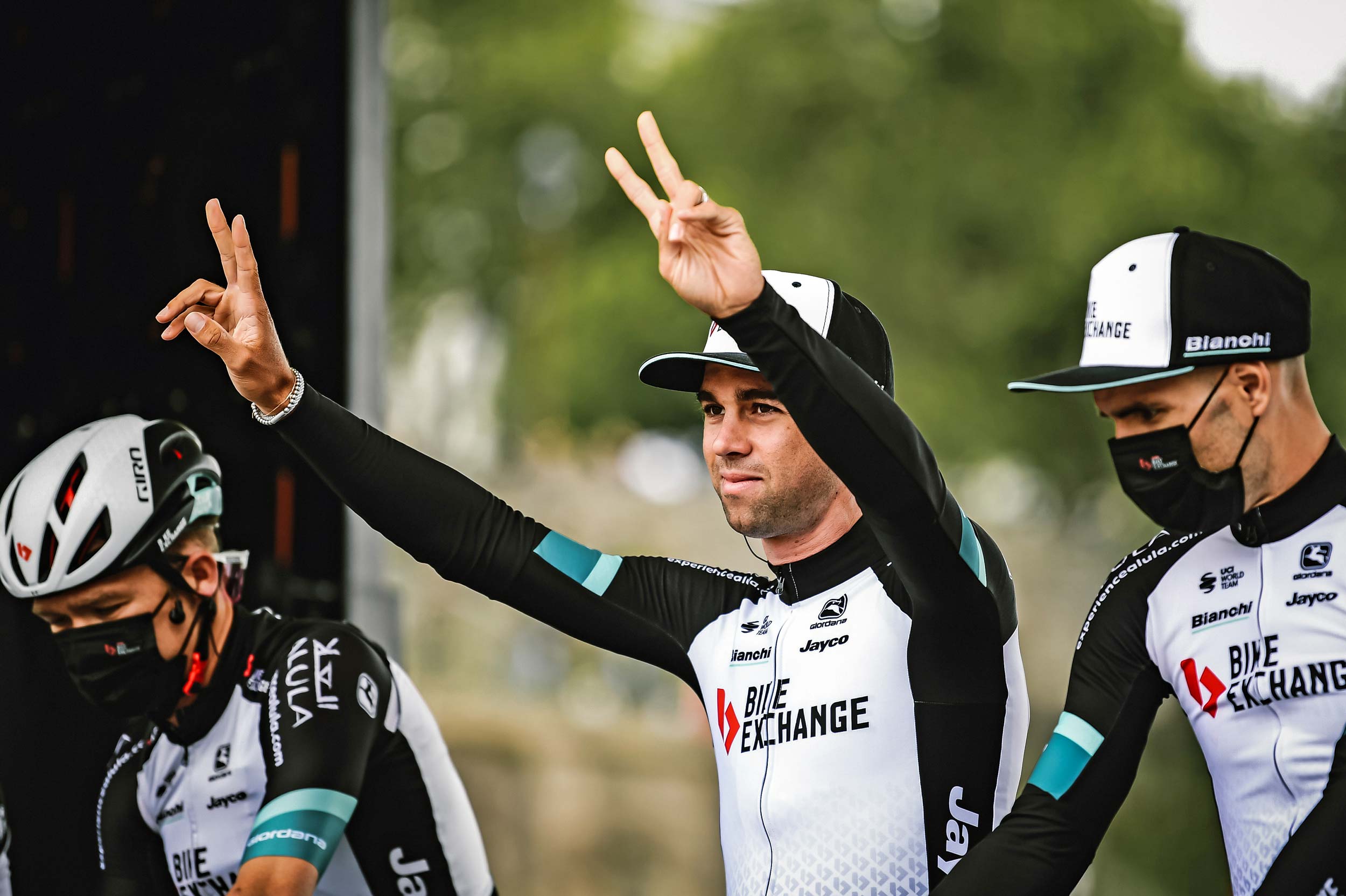 If you believe the stage profiles, there are two more days for sprint finishes in the Tour de France of 2021: one in Libourne on Friday, another in Paris on Sunday.

The first bloke over the line of stages 19 and 21 will collect 50 points, that’s what happens if you win a flat stage.

Cavendish has won four flat stages – that’s 200 points right there, bam! Thank you very much. Add that to the tally he’s collected at intermediate primes along the route and you get the sum total of 298. He’s well clear of the next best of the sprinters, Michael Matthews.

And even though there’s been an obvious blitz by Matthews in recent days, when the terrain has been tough and Cav has switched to survival mode, the Australian is only slowly creeping that little bit closer to the Manxman at the top of the points classification.

Two days ago, on the road to the Col du Portet, Matthews scored seventh place at the intermediate sprint – that’s nine more points for your collection ‘Bling’. Curiously – notably – Cav was eighth in the same sprint… eight points for your efforts, sir. Next?

Yesterday, another mountain stage. Another quest for intermediate points for Matthews, another example of the Wolfpack’s commitment to the Cav cause. In Pouzac near the base of the fearsome Col du Tourmalet, the two men at the top of the points classification were again in action.

Matthews the hunter, Cav the prey… and once again the Deceuninck-Quickstep boys kept their pup safe. At the intermediate sprint it was Cavendish in fifth (11pts) and Matthews seventh (9pts).

It will continue like this all the way to Paris, even if they both need to pause their sprint ambitions on Saturday when it’s TT time.

With three stages to go, Cavendish’s command on the green jersey is strong… but it has been shrinking. What had been an advantage of 72 points at the start of the week is now just 38. Cavendish: 298. Matthews: 260.

Based purely on mathematics, it is possible for Matthews to pull off a coup in the coming days. In the race, after three weeks of tough competition however, the prey holds the aces in the battle with the hunter.

In a pure sprint Cav is not only quicker, he’s also got more support – not just numbers, but men who have been entirely committed to their veteran superstar. What’s more, he’ll be able to defend while Matthews will need to attack… and hope for a miracle, one that stops his rival from scoring any points at all. That’s highly unlikely.

And so, this story concludes how it began. Michael Matthews can challenge Mark Cavendish for the green jersey in the closing stages of Le Tour 2021. Could he? Yes. Will he? Probably not. But that doesn’t mean it won’t be compelling to watch.

Stay tuned. The race is almost over, but there’s a lot more still to come.