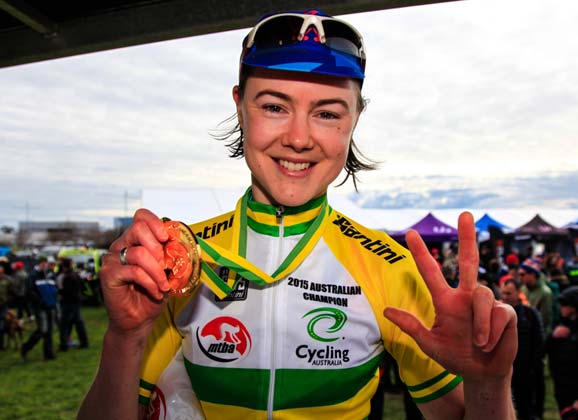 The Australian cyclocross championships were contested over the weekend and, once again, Lisa Jacobs claimed the women’s title. RIDE caught up with the three time winner to find out a little about the race, the day, the vibe and the progression of the sport that is relatively new to these shores… 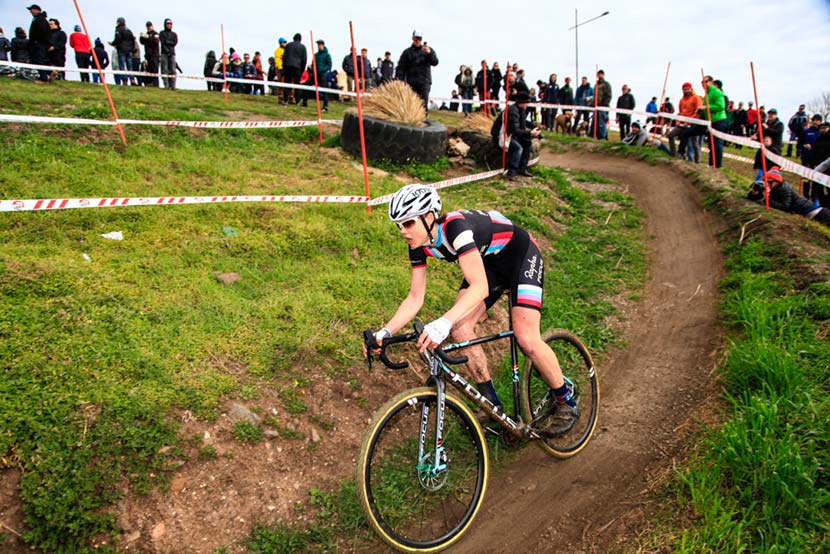 RIDE: I’m talking to Lisa Jacobs who has won yet another national cyclocross championship, as of yesterday. I thought I’d give her a call a day later to find out how it all went and if she could give a quick appraisal of what went on in what seemed like – from social media – a pretty big and exciting day in Victoria. Can you tell us how the race went?

Lisa Jacobs: “It was a pretty exciting day. It was held down in Essendon in Melbourne, out near the airport on a purpose-built cyclocross course which has been built by Fields of Joy over the last year or so.

“It was a pretty technical course. It was a lot more technical than cyclocross courses in Australia have traditionally been.

“It was designed by a mountain biker so it had a lot of mountain biking type of features in it and as you can probably imagine, cross races are pretty short and fast and furious – it was 45 minutes of just being on the rivet.

“We had a pretty strong field.

“I think every year the women’s field gets stronger and stronger so it was really good to have a few national champions from other disciplines out there. We had Oenone Wood, the former World Cup winner on the road – and a multiple Australian champion – and Mel Ansett a mountain bike champion, and a number of other national representatives so it was great.

“It’s a real testament to how cross is growing.

“The race itself was just… it’s always hard. Cross races are always just brutally hard and I think everyone went out pretty hard from the gun.

“The course had dried up a lot from the Saturday racing… we ended up having a really dry, fast course in parts and then a few mud puddles in other parts.

“It’s hard to think back because at the time it’s all a blur but I just remember the first couple of laps were pretty tight and then the field managed to break up a little bit and Mel Ansett – who is leading the national series – was hot on my heels for most of the race and then Terri Rhodes was behind her in third.” 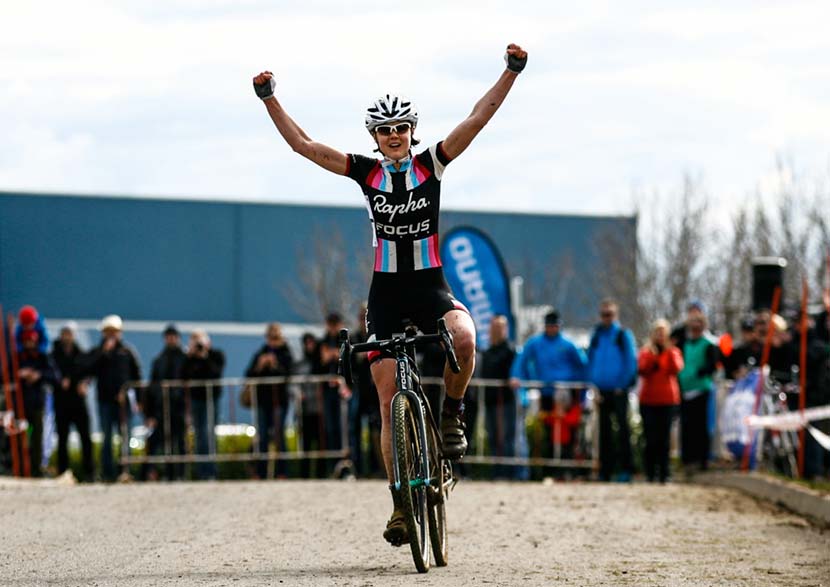 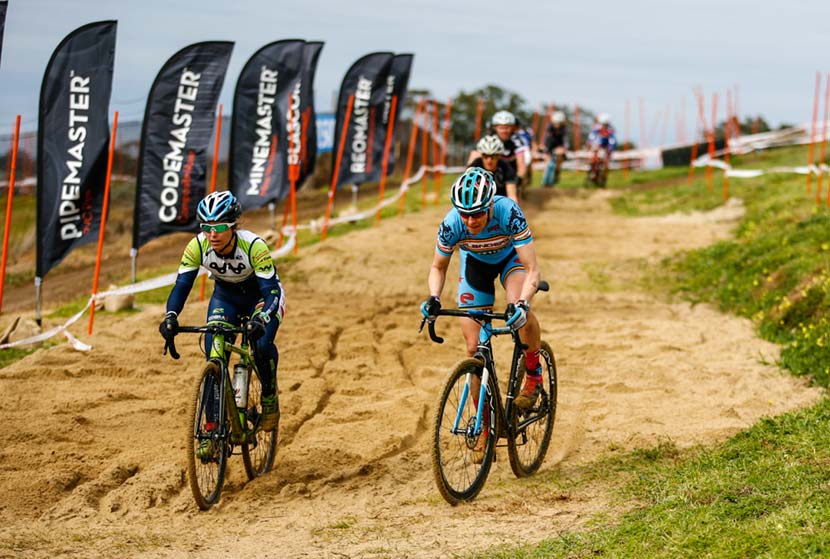 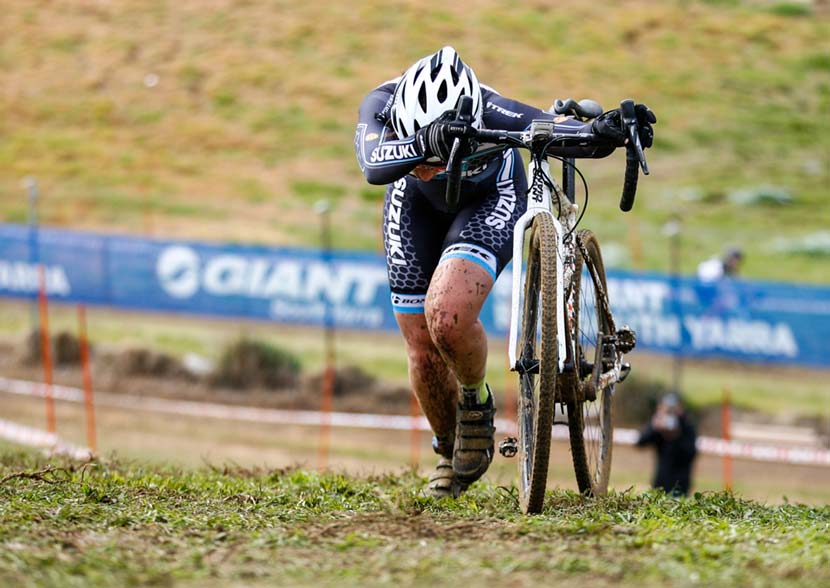 We’re going to look back on the early years of cyclocross competition in Australia and realise that you’ve had a formidable start to it. Is it true to say you’re the only national champion?

You said you had some injuries to come back from earlier. Did it feel like it was your [race] for the taking or were the other girls pushing you all the way to the line?

“It’s a good question because this was one of the harder races I’ve done; I’d had a really good season up until about a month ago and had some good results overseas and in Australia. Then about a month ago I had an injury to my Achilles tendon while I was out training.

“I was pretty much unable to run or race for the last month and there were four races –two national rounds and a state championships and another local race – that I was planning to race but couldn’t. My preparation was pretty compromised, I suppose, but I also missed that race intensity and trying to come back from that is pretty difficult in any circumstance but when it’s a national championship and you know that everyone is working really hard to be in top shape for it… I went into the race pretty nervous.” 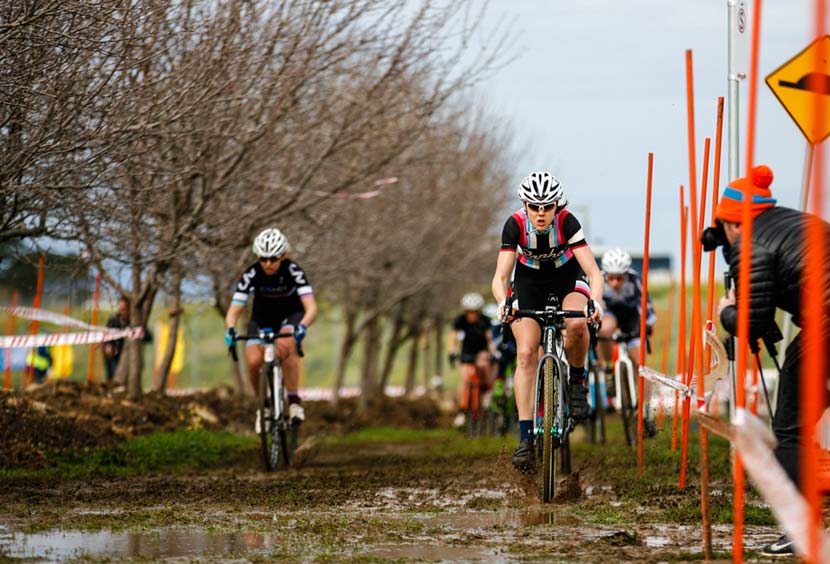 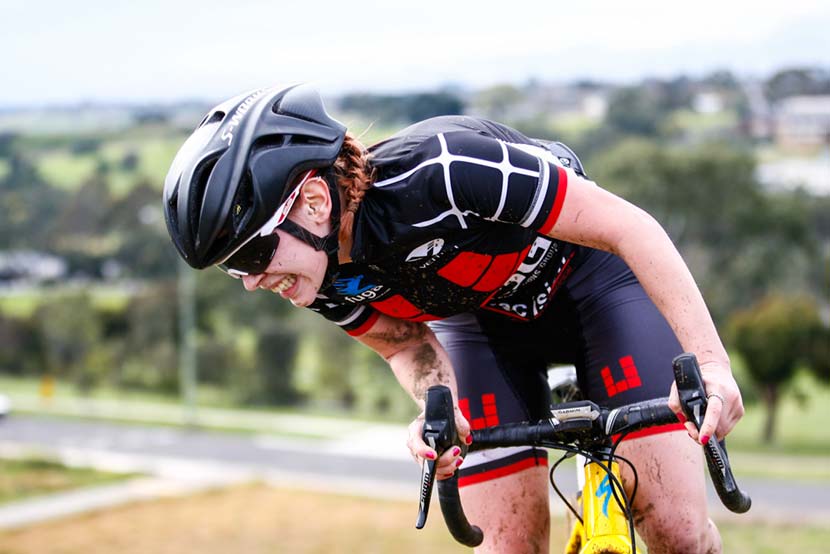 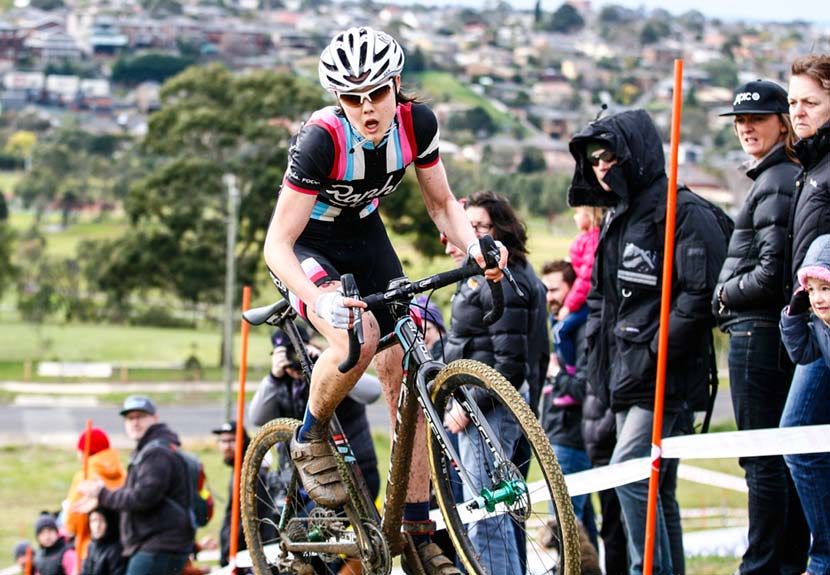 We’ve seen a very quick evolution of cyclocross in Australia. Some of the races in recent years have been in summer – I think it must be much nicer to race in winter.

“Yeah, well cross is a winter sport so your wardrobe just kind of expands as you bring in all this amazing, fleecy, windproof, waterproof stuff. But some of the races can be quite hot so at the start of the UCI season in China in a few weeks time it’s going to be 30 degrees and in Cross Vegas, the first World Cup, in mid-September it’s going to be 30 or 35 degrees. So you compare that to sub-zero temperatures you get around January in Europe and you think, ‘Wow…’ you’ve got to be able to perform in all conditions. But traditionally it’s always been a bit cold and nasty for cross.”

And what was it like with the vibe [on Sunday in Essendon] – was there a big crowd?

“Yeah there was a huge crowd, it was great. There were people who made up banners and signs and got pictures of their favourite rider and drawn cut-outs so there were masks for their face…

“It was great! We had cow bells and the works. It was a really well-attended event so it was lots of fun to be part of.” 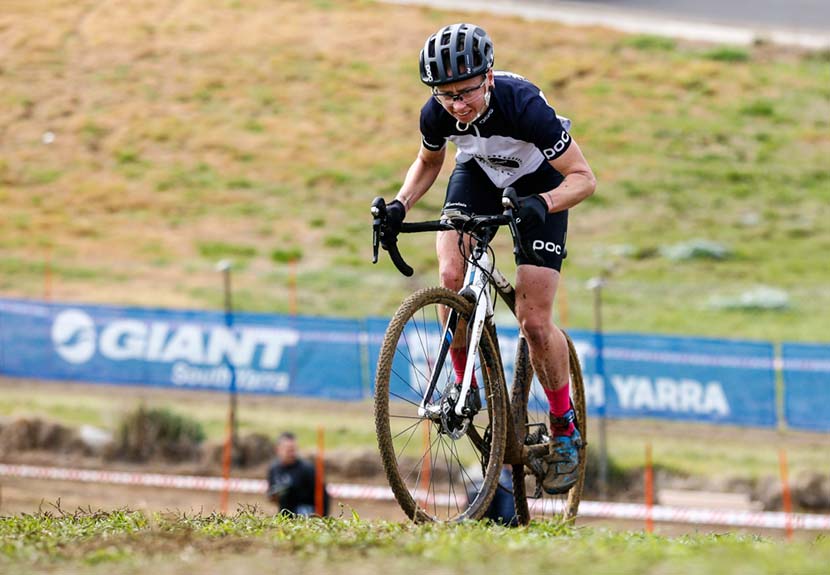 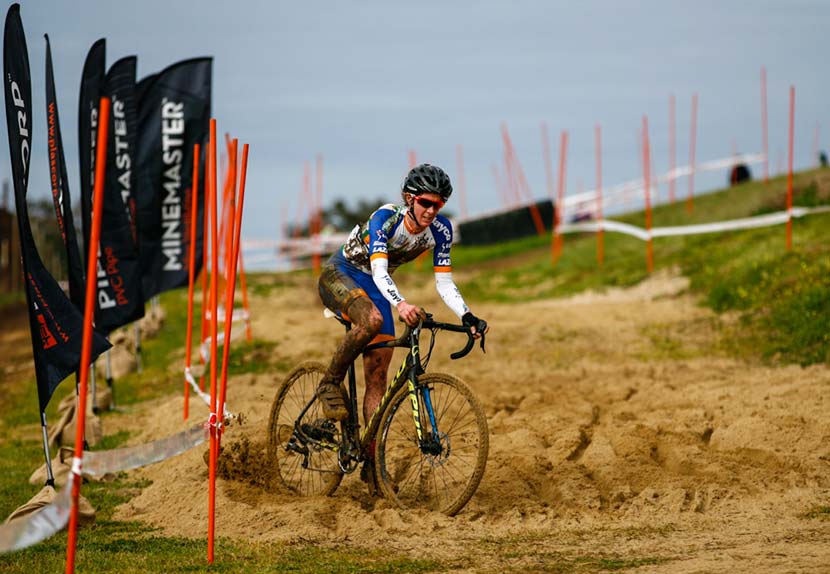 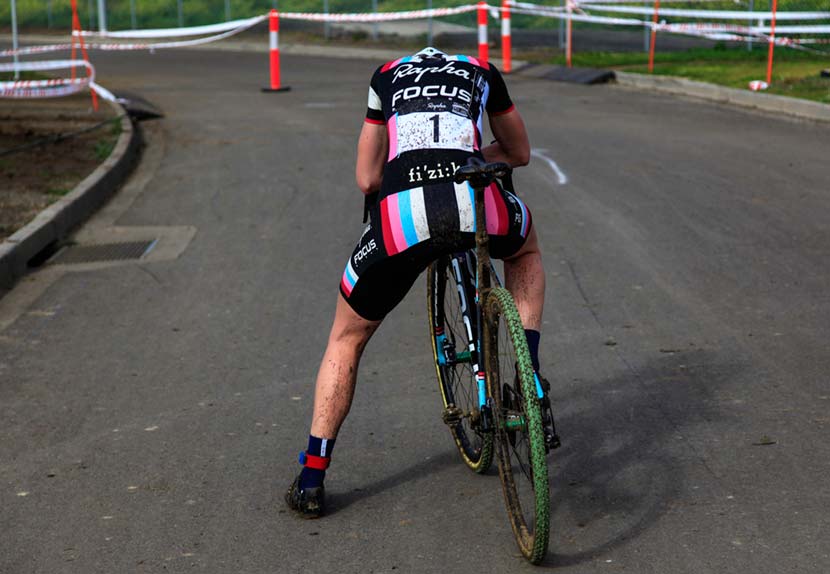 Finally, how important is the representation of cyclocross: a lot of people are making this up as they go along but they have probably seen it enacted in images and in footage from international competitions. Does it feel like they’re trying to create a scene here?

“Yeah, absolutely. We’ve got a growing number of riders who have raced overseas now and that means that the whole standard of competition is continuously rising. We’ve got a really good band of organisers in Australia, particularly down in Victoria, who make a huge effort to replicate international courses so that riders who race over here can have the best possible chance of making the step to go overseas.

“It’s been pretty amazing to watch in the last couple of years. I think the professionalism of the sport has really stepped up so I think there are only good things to come.”