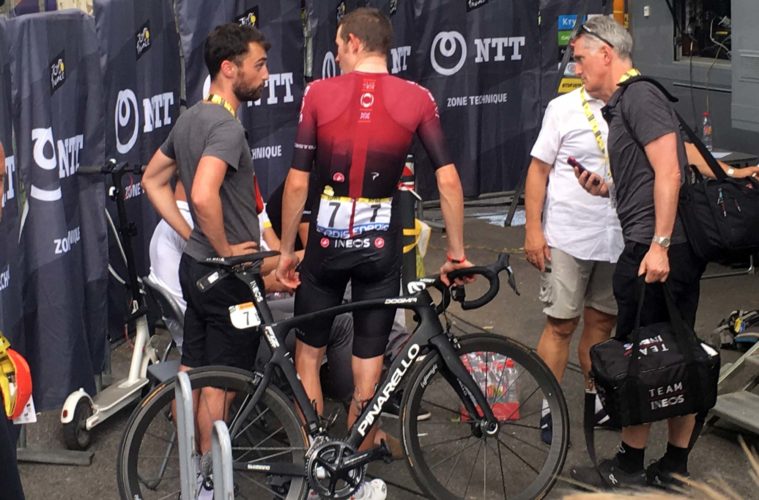 Luke Rowe: “We just got in each others’ way…” – Update: Rowe and Martin evicted from Tour

One small incident in the 17th stage earned a few replays on the TV coverage. It prompted a few questions to be asked of one of the riders involved. Luke Rowe explains his perspective of what he insists was “bike racing” and ended with “no stress”.

“I think we were both on the same road, both doing the same job. And it was nothing really. It’s all good.”

And with that, Luke Rowe shrugged his shoulders in front of a group of about 10 media crews at the end of stage 17.

He was talking about a minor incident that just happened to be replayed often on France Télévisions– and, likely, most international broadcasts. It involved Jumbo-Visma’s Tony Martin, the German from one of the teams that have already been fined 500 Swiss Francs by the UCI for “obstructing” other riders.

As the peloton rode up a gentle inline on the approach to Gap, Martin was at the front, on the right-hand side of the road. Rowe motioned to ride past, on the right of Martin, but the German made a sudden move to block the progression of the Welshman from Team Ineos.

After a brief pause, a moment to freewheel and ensure he didn’t either go off the road or fall of his bike, Rowe attempted another move on the right side. Again, Martin swerved right – and again he came into contact with Rowe.

The media had gathered, largely because warnings – and fines – have already been issued to a number of teams for this kind of antic. But Rowe didn’t seem to care less. He was all smiles after he got out of the doping control van parked near the finish.

There was a brief consultation with Team Ineos PR officer George Solomon and then Rowe casually sauntered over to where the TV cameras were.

“I rolled over the line with him,” he told Daniel Friebe, reporting for a UK TV network. “It’s all good. We shook hands.”

Grinning, he offered a brief explanation of what unfolded: “We just got in each others’ way and that’s bike racing. No stress. All good.”

Then he added with a broader smile: “And you guys love it, don’t you?”

Searching for the right word, I suggested that it seemed to be quite ‘malicious’.

Then I got to expand on my query, telling him: “On television it looked that way.”

“No, no, no. I don’t know how many Tours de France you’ve ridden but, erm, it just does get a bit tense there at times and at the end of the day, you’ve got to have broad shoulders and it’s just no problem.

“You just move on. We shook hands and rode the last 10km of the stage talking to each other. So, no,” he repeated, “it’s all good.”

The official statement from the UCI (above).

UPDATE: Rowe and Martin thrown off the Tour

When there was a delay in issuing the official results of the 17th stage, it seemed that something odd was unfolding. Ultimately, Rowe’s statement that it was “it was nothing really” proved incorrect.

The UCI jury ruled that both riders had overstepped the mark of what was acceptable and, in accordance with Article 2.12.007/8.2.1 of the UC regulations, both Luke Rowe and Tony Martin will be evicted from the 2019 Tour de France.

The reason given, in French is: “Voies de fait entre coureurs” – roughly translated to “assault between riders”.

Both Rowe and Martin will not start the 18th stage and both have been fined 1,000 Swiss Francs and taxed 50 UCI points.