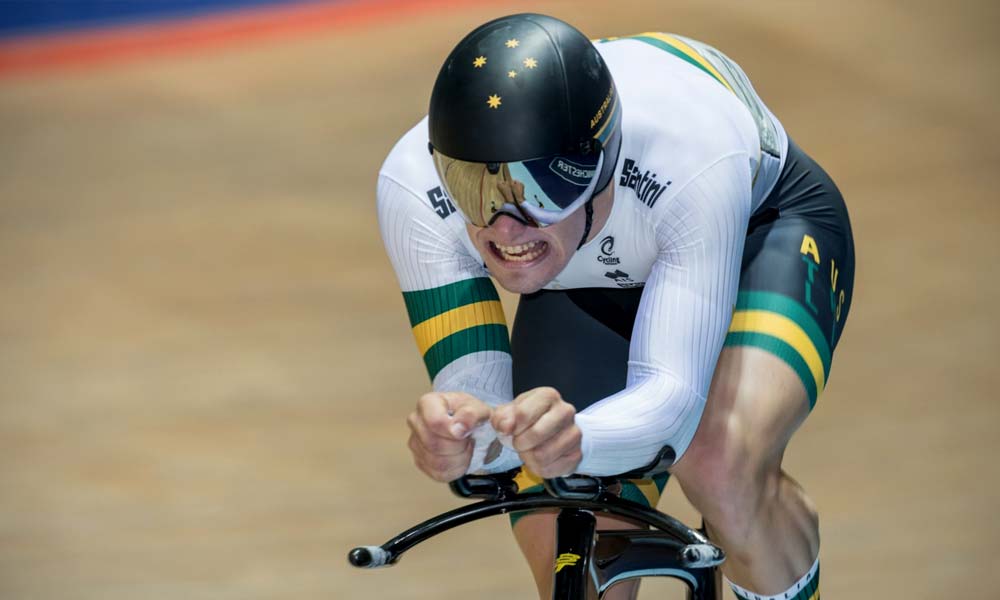 A track World Cup was contested in Manchester on the weekend. Matthew Glaetzer posted the fastest time ever at sea level in ‘the kilo’. It’s quite an accomplishment and we recognise his gold medal in what was once a celebrated event…

Not too long ago, a sub-60 second kilometre time trial would have been a widely celebrated achievement. In 2017 it almost passes us by. After a few tweets, some references on other social media channels, and an email release it’s relegated to the archives. But that doesn’t mean it’s not a significant accomplishment.

At the track World Cup in Manchester on the weekend, Matthew Glaetzer won the gold medal in the 1,000m time trial – ‘the kilo’, the event that once captured the imagination of the broader Australian sporting public.

Danny Clarke, Martin Vinnicombe, Shane Kelly, Ben Kersten… they all made a name for themselves thanks to their efforts in ‘the kilo’ at some point in their cycling careers.

Between the Münich Olympics (where Clarke took silver) and the Melbourne Commonwealth Games in 2006 (when Kersten beat Sir Chris Hoy to win the gold medal) much would be written about a type bike race that now barely raises an eyebrow.

Glaetzer’s qualifying time on the weekend, 59.970 eclipsed the magic one-minute mark. The other 21 riders all took longer than a minute to ride 1,000 metres.

The world record is a phenomenal 56.303, set by Frenchman François Pervis on the Aguascalientes track at a World Cup in Mexico in December 2013.

That was a freakish ride in excellent conditions and the record is likely to stand for a long time yet.

Pervis eclipsed the record set by his compatriot Arnaud Tournant (58.875) set at La Paz in Bolivia in October 2001. Until then no one had ever raced a kilo in less than a minute. A few people have now… and, remarkably, it happened 10 times on that day Pervis set the world record at Aguascalientes in 2013!

Riders from France, Germany, Colombia, the Netherlands, the Czech Republic, New Zealand, and Great Britain all rode the kilo at Mexican World Cup in less than a minute. The track, quite obviously, was incredibly fast that day.

But in Manchester on the weekend, there was not exactly anything exceptional about the conditions but Glaetzer still went fast, very fast in fact. And he’s got the gold medal to prove it. 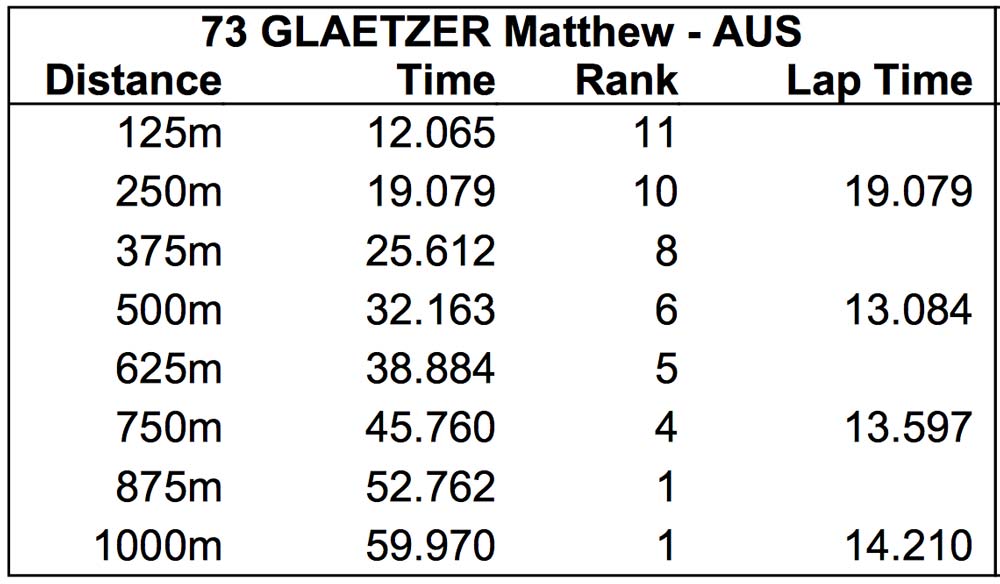 A breakdown of Glaetzer’s sub-60 second kilo (above). Click the link to see the full list of results from the Manchester World Cup.

You can see Glaetzer’s split times above. This is the breakdown of his ‘qualifying’ time – yes, they have that now, even for ‘the kilo’: first qualifying, then the final. It’s a relatively new innovation for track cycling.

Apparently cycling is evolving and there is now a qualification round before the final, even for this TT. It’s now raced with two riders on the track at the same time and, of the 22 starters, eight went to the final in Manchester.

Glaetzer was fastest both times: in qualifying (when he finished in under a minute) and in the final when he posted 1:00.081 to beat Eric Engler from Germany and Callum Skinner from Great Britain. 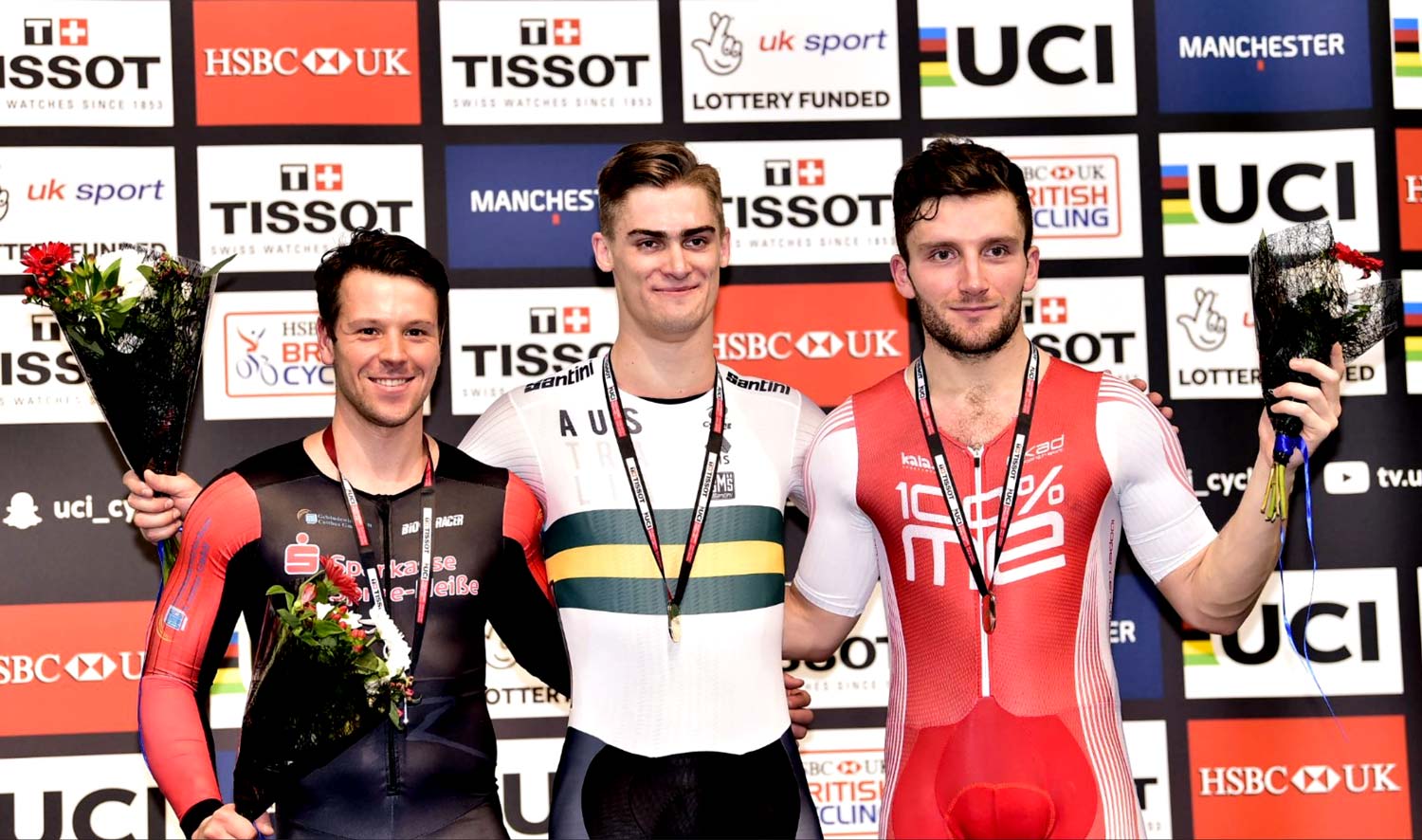 Gold for Glaetzer in Manchester.

For Clarke, Vinnicombe, Kelly, Kersten, Hoy and their ilk, ‘the kilo’ was a one-off effort. Throughout their careers, when they raced the kilo there was one opportunity to perform; do it once and do it well! It’s a format that is compelling and there is a reason why fans will likely remember one kilo or another fondly because of the tension it created.

The reaction from Kersten when he beat Sir Chris during his prime in 2006 is a fantastic sight. As we approach another Commonwealth Games in Australia, it’s possible that we’ll see some replays of the moment ‘Benny K’ fell to the floor when he realised his time – 1:01.815 – was faster than both Jason Queally (the Sydney Olympic gold medallist, who rode 1:01.849) and Hoy (1:02.071).

Hoy was the last rider to win an Olympic gold medal in ‘the kilo’. The event was scrapped from the program after the 2004 Games in Athens.

And that’s when talk about the race – the time, the minute barrier, the purity of a competition such as this – began to wane. By 2006, Hoy knew he had to refine his sprinting skills if he was to win more Olympic gold. The rider who had once dominated ‘the kilo’ needed to focus on the team sprint, the individual sprint and the keirin. Those event were still part of the Olympics. They held appeal to the British team. The kilo time trial was no longer part of his specialty program. He won bronze in 2006 on the day Kersten claimed gold.

There has been much rejoicing in Australia because of fast times in ‘the kilo’. And, as Shane Kelly can testify, there has also been heartbreak because of ‘the kilo’. In the 1990s, he was The Man for this special event. As the reigning world champion, he was poised for Olympic success in 1996 but then he pulled his foot. His one chance – the final, for there was no qualifying – to prove himself on a truly global stage was over almost as quickly as it began.

If Kelly fell over when his foot came out of the strapping, he’d have received a restart. Instead, he rolled on a few metres fumbling to put his foot back in before he conceded. He was beaten because of a mishap. And he can hold his head up high knowing he didn’t fall simply because the rules favoured a crash over a technical mistake.

Shortly after the ‘failure’ of the Atlanta Games, Kelly would go on to add two more world titles to his name: in September 1996 when he posted 1:02.777 to beat Sören Lausberg of Germany by just two-hundredths of a second in Manchester, and in Perth in 1997 when he won the rainbow jersey with 1:03.156, again relegating Lausberg to the silver medal position.

Throughout those years, when Vinnicombe then Kelly then Queally then Hoy then Kersten gained headlines for their accomplishments in ‘the kilo’ it was a blue-ribband event, something that could conjure more than a passing mention in the newspaper. It would receive national coverage and the names of track cyclists were uttered on the radio and TV news bulletins.

In 2017, a sub-minute ride by one of Australia’s genuine medal prospects for the next Olympic cycle gains a cheer from the grandstand in Manchester and a passing mention on Twitter… and, well, little else.

But those who know the history of cycling know that Glaetzer’s time is something special.

Matthew Glaetzer, we salute you and your conquest in ‘the kilo’ on the weekend. We recognise the significance of your time and say congratulations on what you’ve done – and we wish you all the best for what you’re yet to try and do.

But we also ask: why is it that cycling fails to attract the attention it once did with the media and public alike?

If someone can ride 1,000 metres from a standing start in less than one minute it’s pretty impressive. It may not have happened at the Olympic Games and it may not be fast enough to eclipse that phenomenal time by Pervis but it is something to celebrate. 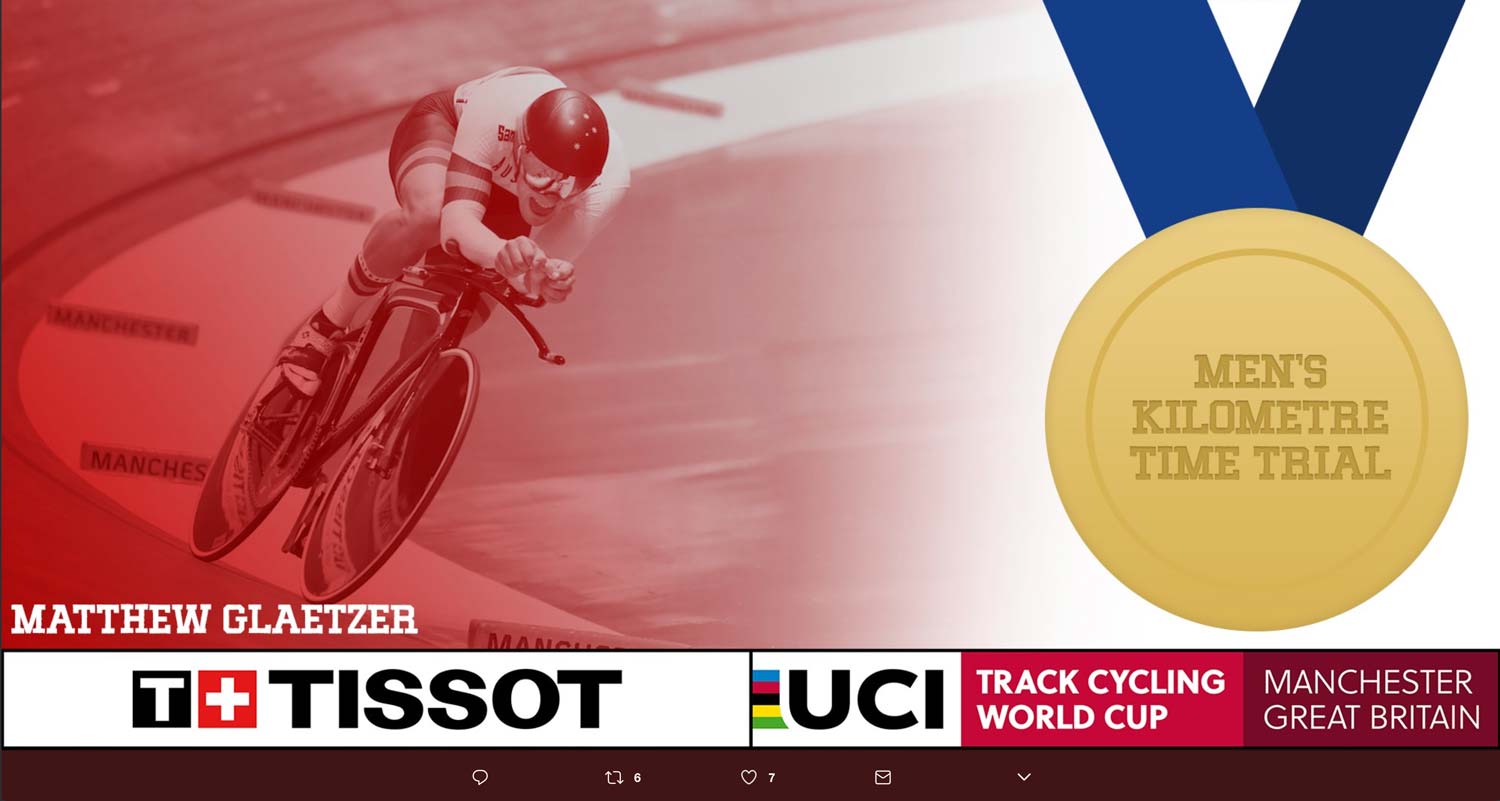