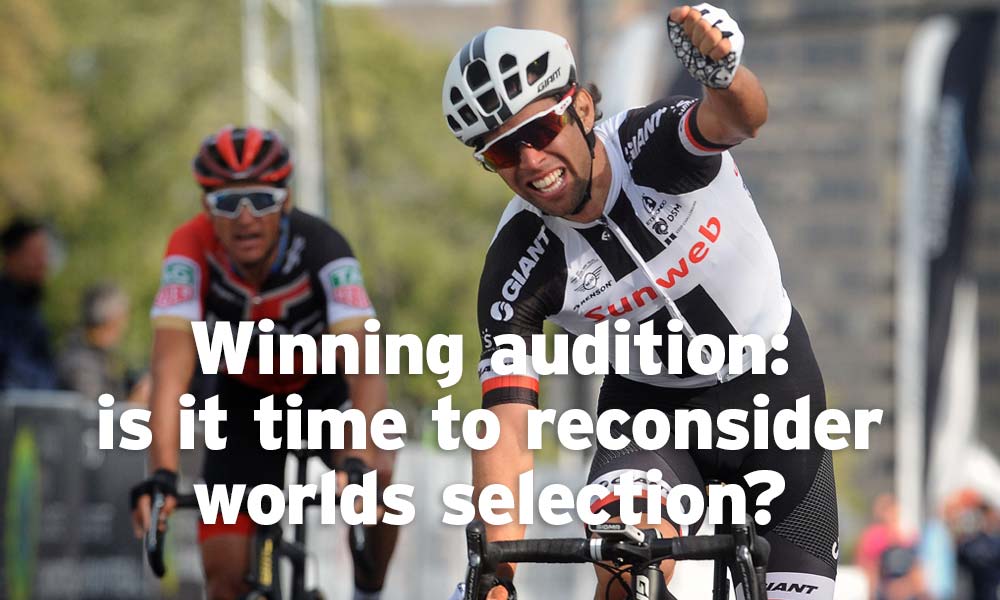 Matthews’ winning audition: is there a spot in the worlds team?

Two victories in two WorldTour races in three days… is that enough to warrant a change in selection as the world championships approach?

Michael Matthews hasn’t had the best of seasons but events in Canada over the weekend remind us what this rider is capable of. The winner of both WorldTour races, the GP Cycliste de Quebec and GP Cycliste de Montreal, is clearly in fine form… but it’s not enough for him to make the cut for the Australian team at the world championships later this month.

“We know the course is going to be super tough and feel confident we have the right mix of talent and purpose for this event,” said Cycling Australia’s technical director, Brad McGee, on 15 August when the Aussie line-ups for the worlds in Innsbruck were announced.

The final event on the program is the elite men’s road race on 30 September.

The selection of eight Australians was nominated over six weeks out from the worlds.

The aim is to see if they can turn a GC specialist into world champion. It’s been done before, when Cadel Evans won the rainbow jersey in 2009 and, this year, the hope is to repeat that effort with Richie Porte.

Considering the course in Austria, that seems like a fair approach.

But things can change a lot in six weeks.

In advance of the Vuelta, Porte insisted that he wouldn’t be in the kind of form to make much of an impression on the GC of the final Grand Tour of 2018. His forecast proved accurate. He’s been largely anonymous in the opening fortnight, riding with the grupetto in the mountains while seeing out his stint with the BMC Racing team before moving to Trek-Segafredo next January.

“I want to go to the Vuelta and finish a Grand Tour because it’s been a long time since [I’ve done that] and I think we’ll just see how it comes out,” he said three weeks before the Vuelta. “But it’s easy to be motivated for a race like the worlds, go and race with your fellow countrymen.”

In other words: he’ll use the Vuelta as training and then hopefully rip back into top gear for the one-day race a couple of weeks after the Grand Tour.

Meanwhile, however, a multiple medallist at the world championships is demonstrating that he is in fine form. 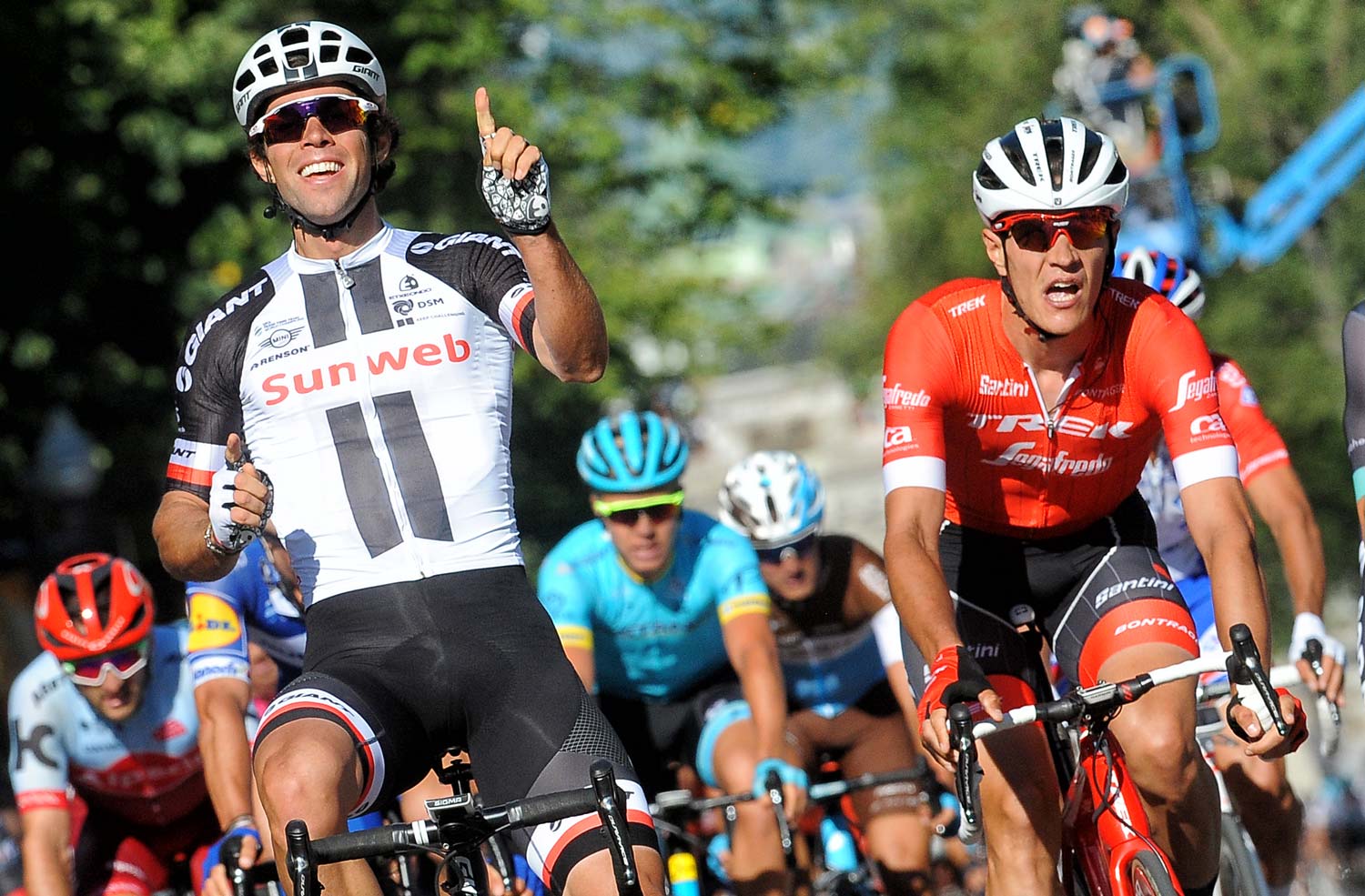 Matthews wins the first of two WorldTour races in Canada (above).

Michael Matthews has won gold, silver and bronze in the past – admittedly, the first of these was in 2010 when he was still racing in the under-23s. And the course in Innsbruck isn’t as suitable to his strengths as what the circuits in Richmond (2015), Qatar (2016), and Bergen (2017) were.

There’s a lot of climbing on the menu for the road races this year and Porte has the qualities required to win on such a course.

“I really look forward to putting on the Aussie jersey at the end of the season,” Matthews told CyclingNews recently. “And with one of my best friends, Richie Porte, being the leader this year, I really wanted to go there to support him with every bit of energy I had.”

In the last three years, Matthews has finished second, fourth and third in the worlds. This year he won’t be racing.

“I got a phone call just before the BinckBank Tour to say that I wasn’t going to be selected, and that they had better riders than me to do the job for Richie,” he told CyclingNews, before concluding: “I personally don’t agree with that, but that’s their decision and I have to accept it.”

When Richie Porte was last nominated as a leader for the Australian team in a one-day race, he crashed out in sensational style. The road race at the Rio Olympics didn’t end the way he wanted it to. He fractured his right scapula in a nasty accident at high speed: DNF. Ouch! Bummer…

And remember how Greg Van Avermaet overcame the climbs and the climbers… and everything else and won the gold medal?

It can happen in one-day races. Guys can reinvent themselves and become stronger than expected on steeper gradients – at least that’s what happened in Rio a couple of years ago.

But GVA isn’t any ordinary rider. He’s exceptional. He can lead the Tour de France for day after day and prompt a new sponsor to back a team that was on the verge of collapse. He can beat mountain goats on mountainous courses. He can sprint. He can earn headlines. He can surprise everyone. And he does so consistently.

Good as he is though, Van Avermaet couldn’t get past Matthews on Friday or Sunday in Canada. The Belgian was second in Quebec and third in Montreal. And we’re yet to see the announcement from the Belgian federation about the world championships. Still, do we expect GVA to be in the mix? Absolutely! Does he deserve to be there? Hell yeah…!

You know it makes sense.

Another thing that makes sense is nominating Richie Porte for sole leadership of the national team on a course like the one the elite men will race on in Innsbruck. He deserves that status, even if his form at the Vuelta seems questionable.

Porte may well be the bloke who ends the remarkable sequence of wins by Peter Sagan but even the Tasmanian himself isn’t sure about that.

“I think it’s a climbers’ course this year,” he said not too long ago, before adding: “which doesn’t mean Sagan can’t morph into a climber and go for it…”

In other words, the dominant rider at the worlds from this generation could force himself to suffer just enough to crest the climbs in Austria along with the mountain specialists.

GVA did it in Rio. Sagan could do it in Innsbruck…

So where does that leave Matthews, a rider with similar qualities?

Non-selection sucks at the best of times but when he is in peak condition and beating the likes of Van Avermaet on the tough circuits in Canada, it does beg the question: could Matthews also overcome the gradient and be a force at the worlds?

We won’t ever know the answer. He concedes that, despite his frustration, the selection has been announced and it would be wrong to force any of the eight off the roster for the road race at the world championships.

The selection has been made. It’s logical to back Porte for what he described as a “once-in-a-career worlds”. And, as Australian selectors have learned from past experience, it’s wrong to go into a race like that with a two-pronged attack.

Name a leader. Build a team around him. And proceed as planned… that’s how it’s going to be in 2018. In 20 days we’ll know if the plan worked or not.

*Dennis, the winner of the opening stage of the Vuelta a España, will race the elite men’s time trial for Australia.