Michael Matthews has raced only two days so far in 2020. He finished third in Milan-Sanremo on 7 August and, yesterday in France, won the Bretagne Classic. 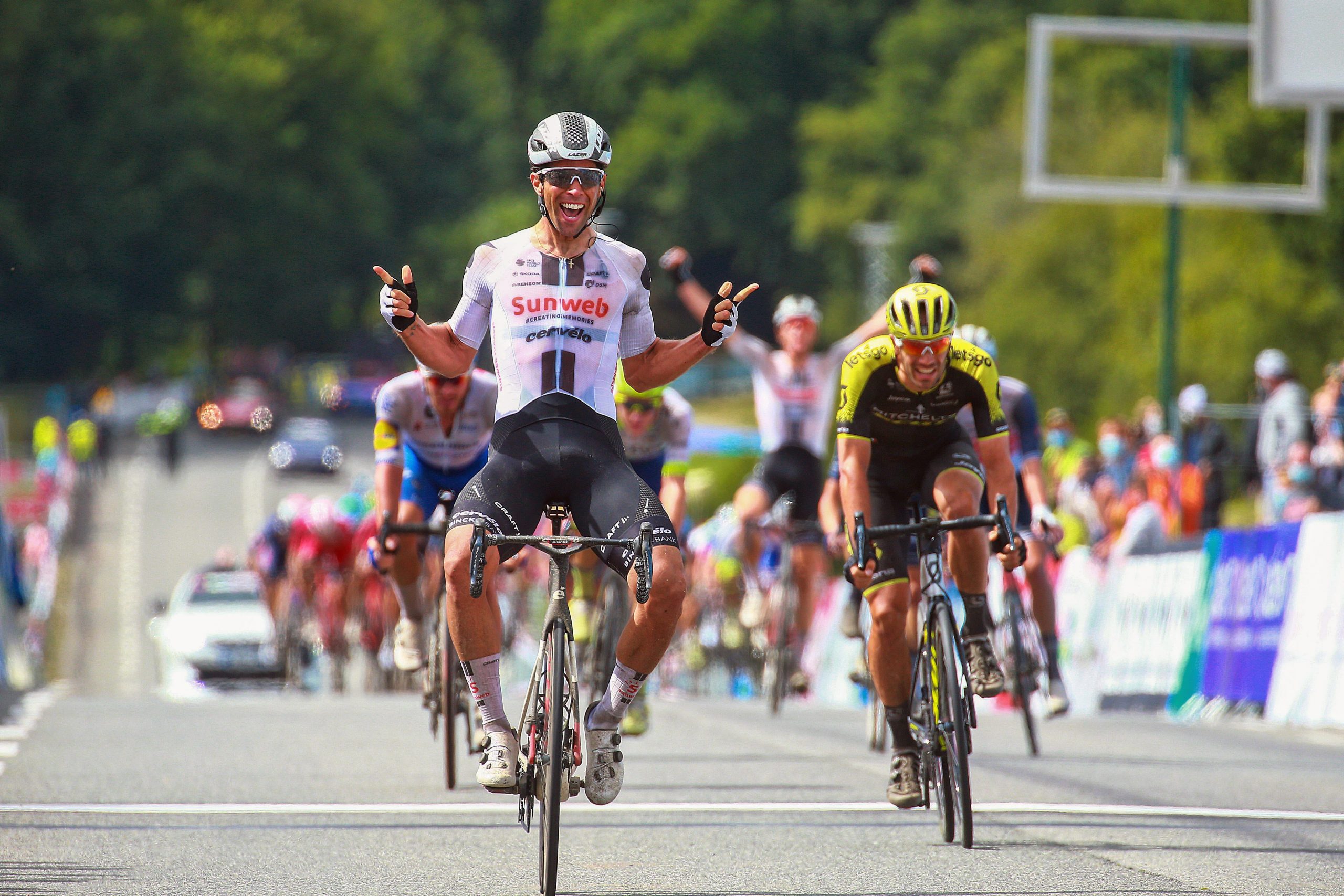 Matthews gets a win in his second race appearance of 2020. (Photos: Cor Vos, via Team Sunweb)

“I worked really hard through the lockdown,” said Michael Matthews after winning the second race he started in 2020. Wearing a mask and speaking with Antoine Plouvin from Cycling Pro Net, his post-race interview is typical Matthews. He begins by being grateful, explains the race, and considers what comes next.

In 2020, there’s no Tour de France start for the 2017 green jersey winner, instead he’s looking towards Tirreno-Adriatico (9-15 September, then the Giro d’Italia 3-25 October).

“We couldn’t go outside in Monaco,” he said of the ‘confinement’ period imposed from March to June. “We had to train inside on the home trainer the whole three months, so I definitely went through some highs and lows.

“To come here with this victory, it was definitely emotional. Me and my family and my coach – all the people around me – have put in so much work for this victory today and this is for them.”

An injury sustained on the Poggio in Milan-Sanremo – moments before he led the bunch home and sprinted to third place, a few seconds behind Wout van Aert and Julian Alaphilippe – prevented him from starting Il Lombardia a couple of weeks ago, but success in the next race is a nice reward in a disrupted year.

The Bretagne Classic Plouay, contested near where the relocated Grand Départ of the 2021 Tour de France will be, is part of the UCI WorldTour. It’s also in the same part of France to where the world championships of 2000 were; some have even suggested it could be the location of the 2020 worlds… but that is just speculation while we wait for confirmation from the UCI about this year’s championships.

Matthews is the third Australian to win the ‘GP Plouay’, following Simon Gerrans’ triumph in 2009 and Matt Goss in 2010.

“It was less selective than we thought it was going to be,” he explained, of the 248km race.

“Last year there was the dirt section, and gravel and everything, so that made it more selective. But when we had a headwind on the way back to the circuit, it was too hard for people to attack.”

Team Sunweb have faith in Matthews’ form and although he misses the big loop of France this year, he’ll return to the Giro which he last did five years ago when he was part of the Orica-GreenEdge team.

“We set out with the goal of delivering Michael to the finish today as we really believed this was a great opportunity for him,” said Sunweb’s coach for the Bretagne Classic, Sebastian Deckert.

“In the crucial moment, Nils [Eekhoff] and Michael had very good communication and really executed the plan brilliantly,” said Deckert. “It was such an incredible team performance, a great sprint and a superb lead out. Winning such a race is not easy – this was such a team effort and the team can be so proud of it.”

The appraisal from Matthews highlights the options Sunweb had, with Eekhoff in the break and the Australian monitoring things should it come to a sprint.

“I tried a few times to attack, and go into a smaller breakaway, but in the end there were not the right guys there and they still had riders in the peloton to bring it back,” said the winner. “I knew, from there, it was going to be a sprint.

“Nils Eekhoff went with [Florian] Sénéchal in the final, when I saw there was a gap behind, I called on the radio for Nils to attack or to really start pulling hard because the bunch was gone. They caused a split, which was also good for us.

“We had Nils in the front… so, in the end, he could go for the victory but then Luka Mezgec had to go early to bring those two back and I could benefit from this.”

After another podium appearance in 2020, Matthews now goes to his training base in Livigno, in the mountains of northern Italy, and then on to Tirreno then the Giro.