Memories of Le Tour: catching the vibe of the Dutch corner on Alpe d’Huez in 2013

Spectators are back in big numbers at the Tour de France of 2021. The sight of the crowds inspired Harry Chemay to share his memories of a special day at the Tour in 2013… when he was swept up in the carnival atmosphere on Dutch corner on Alpe d’Huez for stage 18.

– Click the link below to get a tiny taste of the mayhem on Alpe d’Huez, Dutch corner… Le Tour 2013 –

The buzz of anticipation grew as our group smashed along the valley road leading to Le Bourg d’Oisans, the alpine village that sits at the base of the mighty Alpe d’Huez. The mythical climb, a Tour de France regular since its introduction in 1952, was to feature in the 100th edition – not once, but twice.

Stage 18 would feature a double ascent of the 21 hairpins… and Christian Prudhomme would joke about it providing the meaning of “life, the universe and everything” – a reference to the Hitchhiker’s Guide to the Galaxy and the number 42. (But let’s not get distracted, there’s a story about a bike race to tell, one that has stayed fresh in my mind since that special day in 2013.)

The weather had turned against us on this, my last day as a tourist in France, enjoying the Tour of 2013. A light drizzle fell as we formed a paceline on the valley road, our coach having long since been abandoned to the mayhem of race day traffic further down the valley.

Our tour host, Phil Anderson, moved to the head of proceedings, nonchalantly pulling our peloton, Filippo Ganna-like, while we hung on for dear life. Being led to one of Le Tour’s most iconic climbs by my childhood hero, the first Australian to don the maillot jaune, simply added to the surreal nature of the day.

Anderson’s last competitive appearance at the Tour de France might have been in 1994, but the watts were very much still on show, as we scrambled desperately to hold his wheel. Sit on, and it was a 40 kph armchair ride. Get spat out the back and face a block headwind all the way to our designated meeting point. 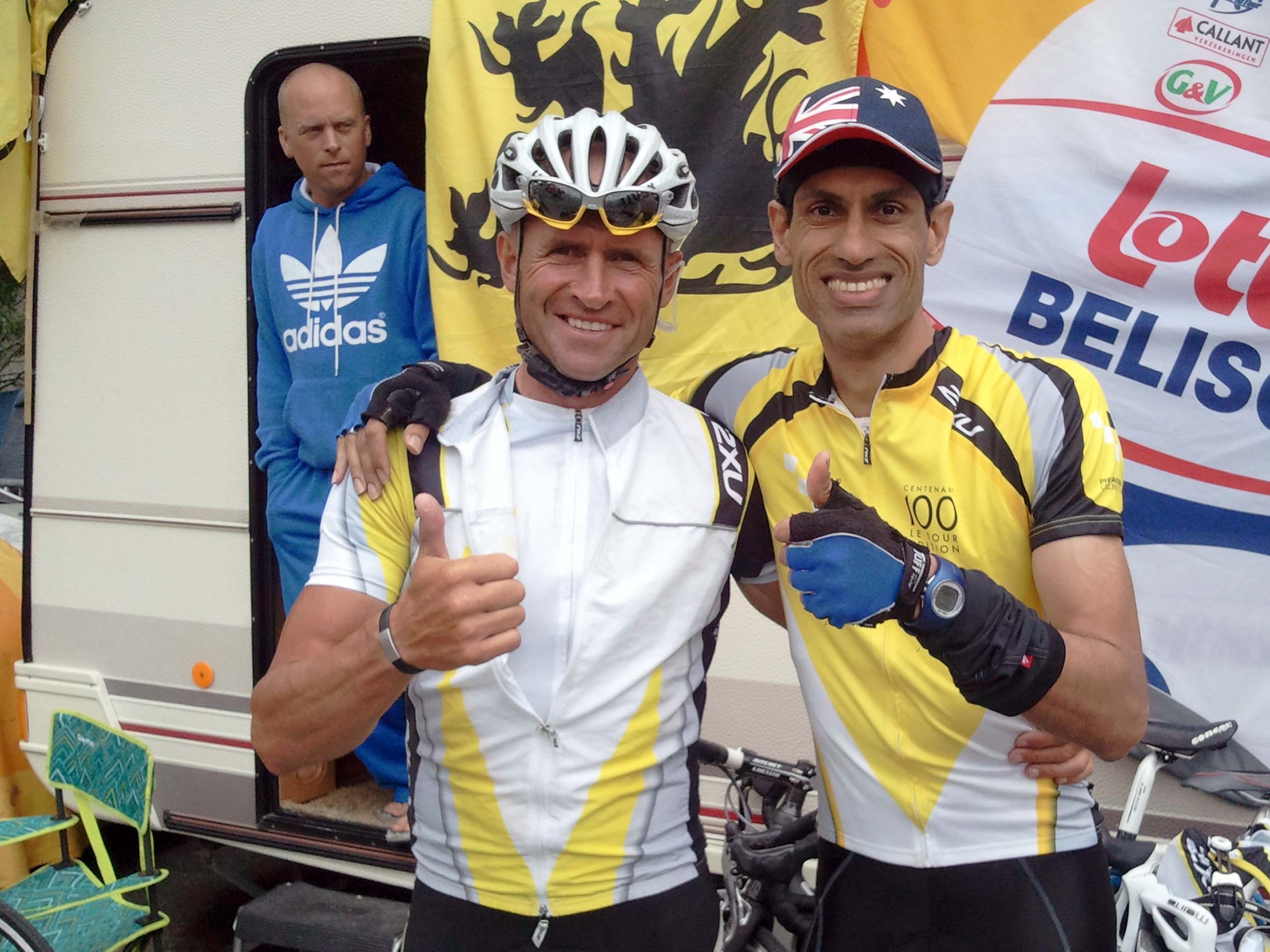 Harry on Alpe d’Huez in 2013… thumbs up on the day the legs gave way. (Photo: Harry Chemay)

A week of riding through Provence and the Alps – including the Mont Ventoux stage on 14 July, the day of the French national holiday – and a group detour to tackle the 2,802m Col de la Bonette, had taken its toll. I simply couldn’t refuel enough to keep up with the demands of these big climbs, yet here I was, about to tackle race day Alpe d’Huez on an empty tank.

The plan was simple enough. We would each climb at our own pace, then rendezvous at the little hamlet of Huez, a few kilometres short of the summit finish line to watch the combatants fly past. 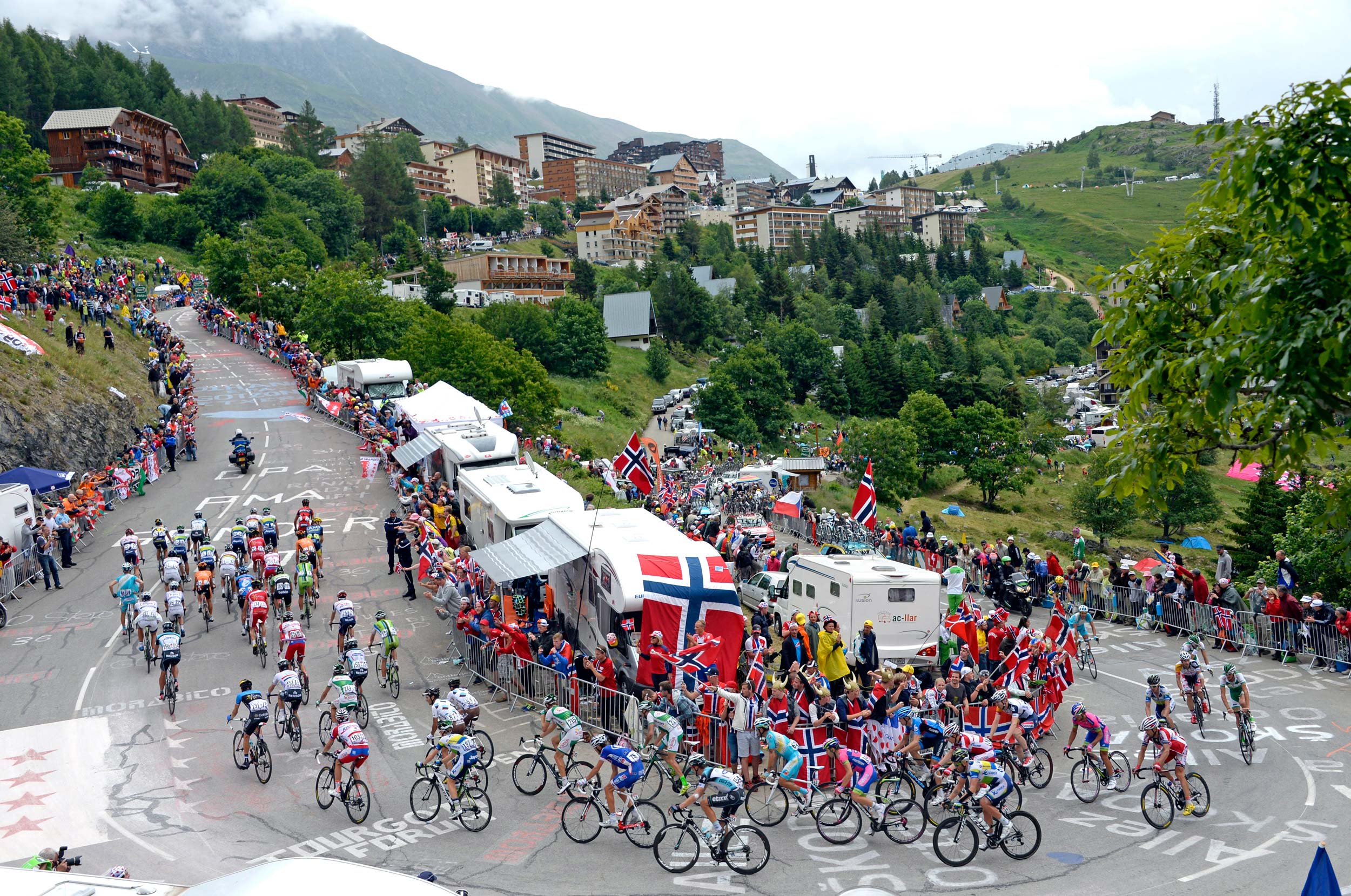 Nothing can prepare you for that first steep pitch of the climb to Alpe d’Huez. It appeared seemingly out of nowhere after a sharp left turn after crossing the bridge just outside of Le Bourg d’Oisans. Like some fortress rampart, a 10 percent incline welcomes cyclists to the Alpe d’Huez. It was, and remains, the most intimidating start to a climb I’ve ever experienced.

I hit the climb with everything I had. Less than two hundred metres later, having already been forced into my 34/27 bail-out gear, I was gassed. One hairpin down, many more to come on the grind up to Huez.

On paper, the 14 kilometres to the summit of Alpe d’Huez, at 1,380 metres, doesn’t appear particularly challenging in either distance or altitude gains. But it rides far harder, thanks to an average gradient of 8.1% with long pitches at 10% or greater, together with those 21 mythical hairpin bends, some of which pitch up at a quad-quivering 13%. 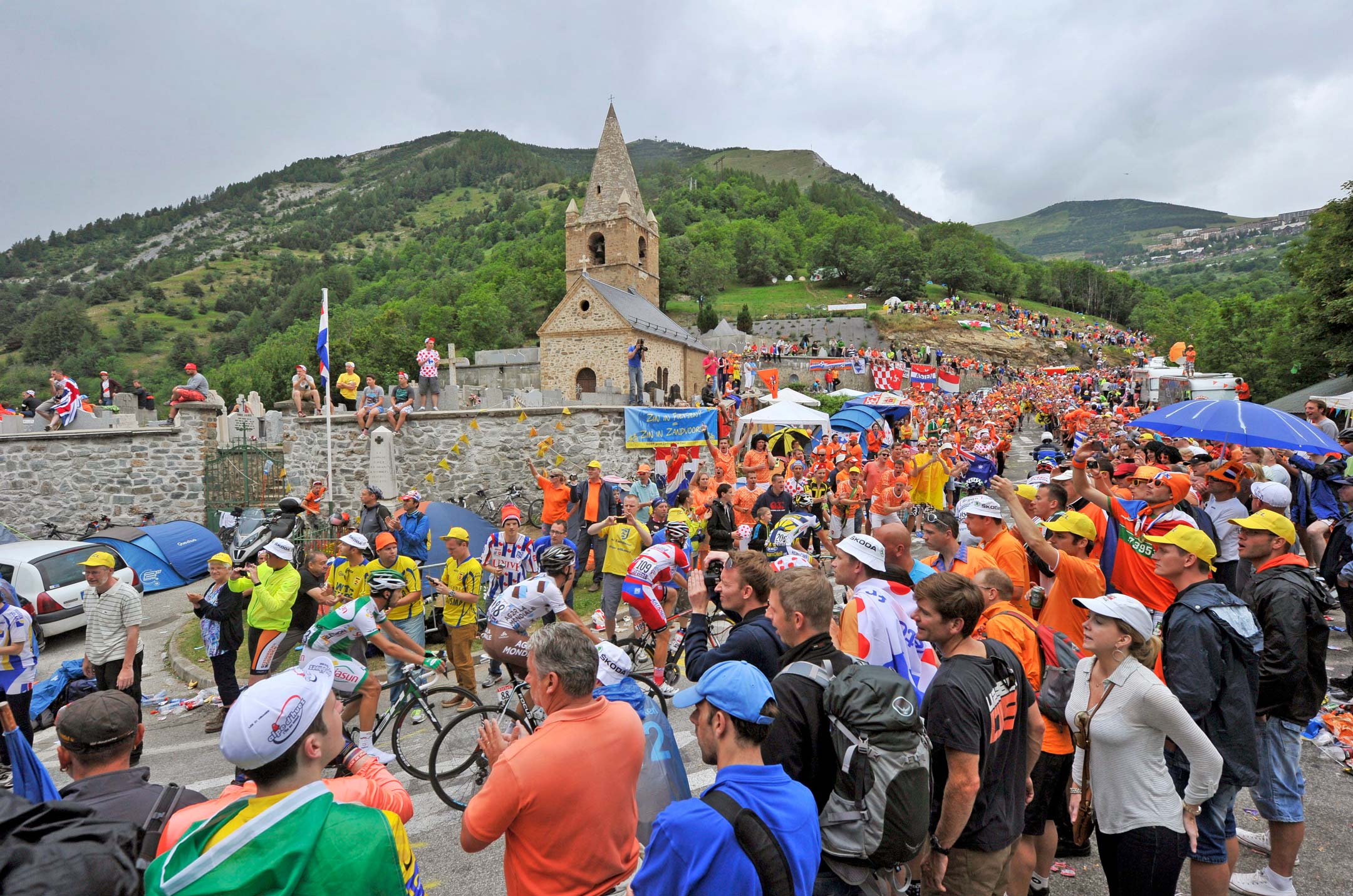 Race day on Alpe d’Huez is a cacophony of every conceivable celebration.

Fans in their campervans vie for any serviceable patch of ground, often arriving days in advance. There they sit; couples, families, friends, nibbling the local cheeses and quaffing wines. Festive, yet all very civilised.

And then there are the Dutch. I was absolutely unprepared for the Dutch.

While the French approach Alpe d’Huez race day with typical Gaelic panache, the Dutch approach it as that it’s a festival – Glastonbury in the Alps, you might say, a party with attitude at altitude.

Flags of the Netherlands dot the landscape at hairpin seven, affectionately known as ‘Dutch Corner’. The dominant colour is orange, the dominant vibe 1990s manic rave.

The Dutch arrive here well before the race, and as the big day approaches their energy builds to a frenetic crescendo.

And so it was that three of us found ourselves at Dutch Corner, wedged in a sea of orange, unable to proceed further as thousands of orange-clad revelers sang, danced and bounced all around us. The party was stopping for none, not even team cars and coaches bound for the finish line further up the mountain. The convoy simply had to inch its way through the orange mayhem.

If cycling has a spiritual party central, Dutch Corner at Alpe d’Huez is surely that place. 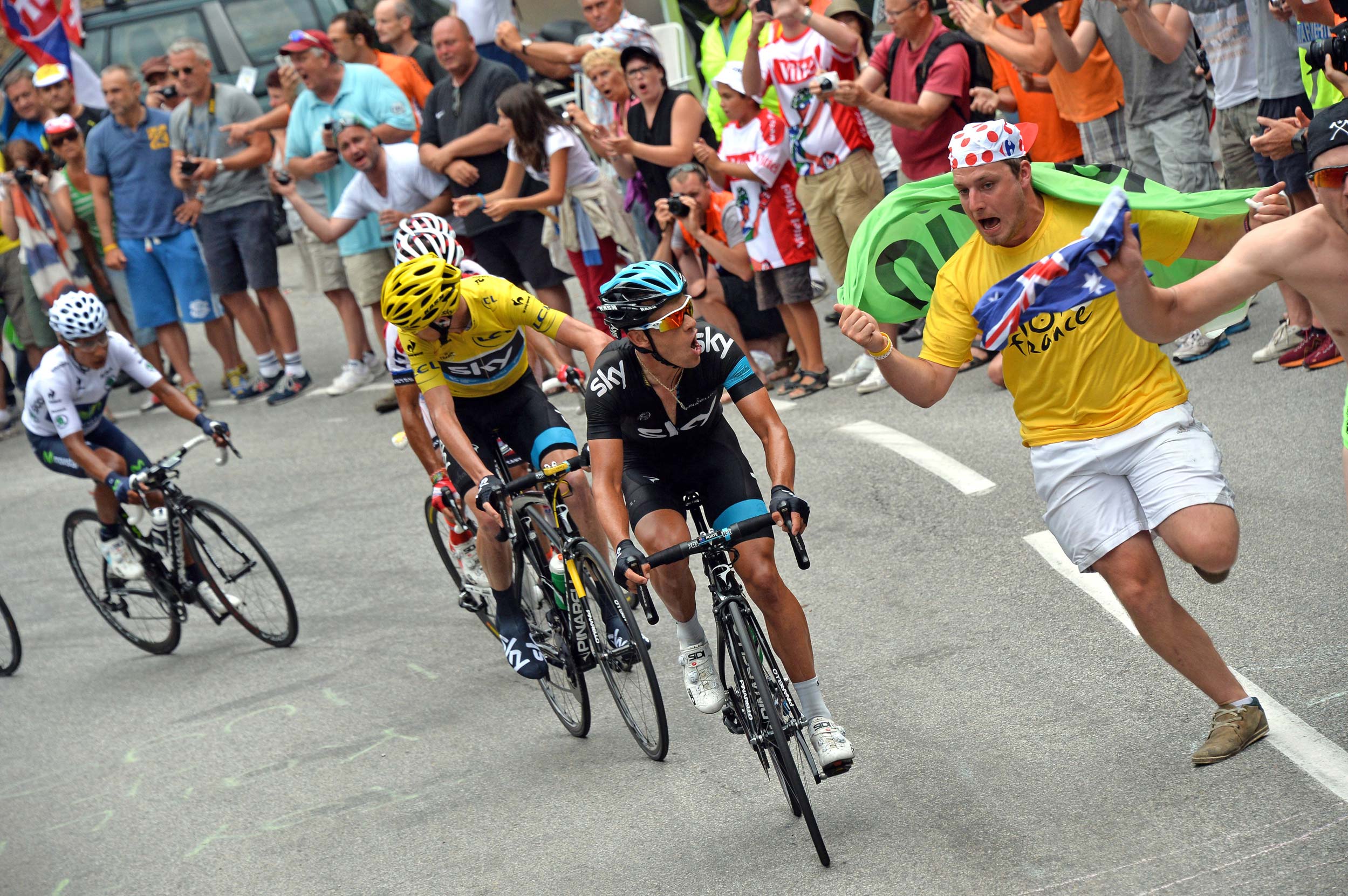 Leaving the Dutch to their race-day rave, we pushed on the best we could. My dreams of soaring upward free of impediments lay in tatters, both by the sheer crush of humanity on every spare inch of tarmac, and by my legs which had signaled their capitulation.

My speed had dropped into single digits, so keeping the bike upright was now more a priority than any thoughts of imitating Marco Pantani on his audacious sub-37 minute effort in the 1995 Tour.

The awful reality of hunger-flattening on one of cycling’s great climbs struck me when a child of barely 10 sailed past my S-Works on what looked like a K-Mart special. Yup, I was well and truly cooked.

Thankfully I had one of Phil’s road captains for company, a Flandrian named Koen. Tough as nails, Koen was the sort of bloke I’d imagine would be in his element driving an echelon along the crosswind-swept flatlands of Belgium. A rouleur by build, he was happy to play sweeper this day, collecting laggards like me as the rest of the group ascended toward Huez. 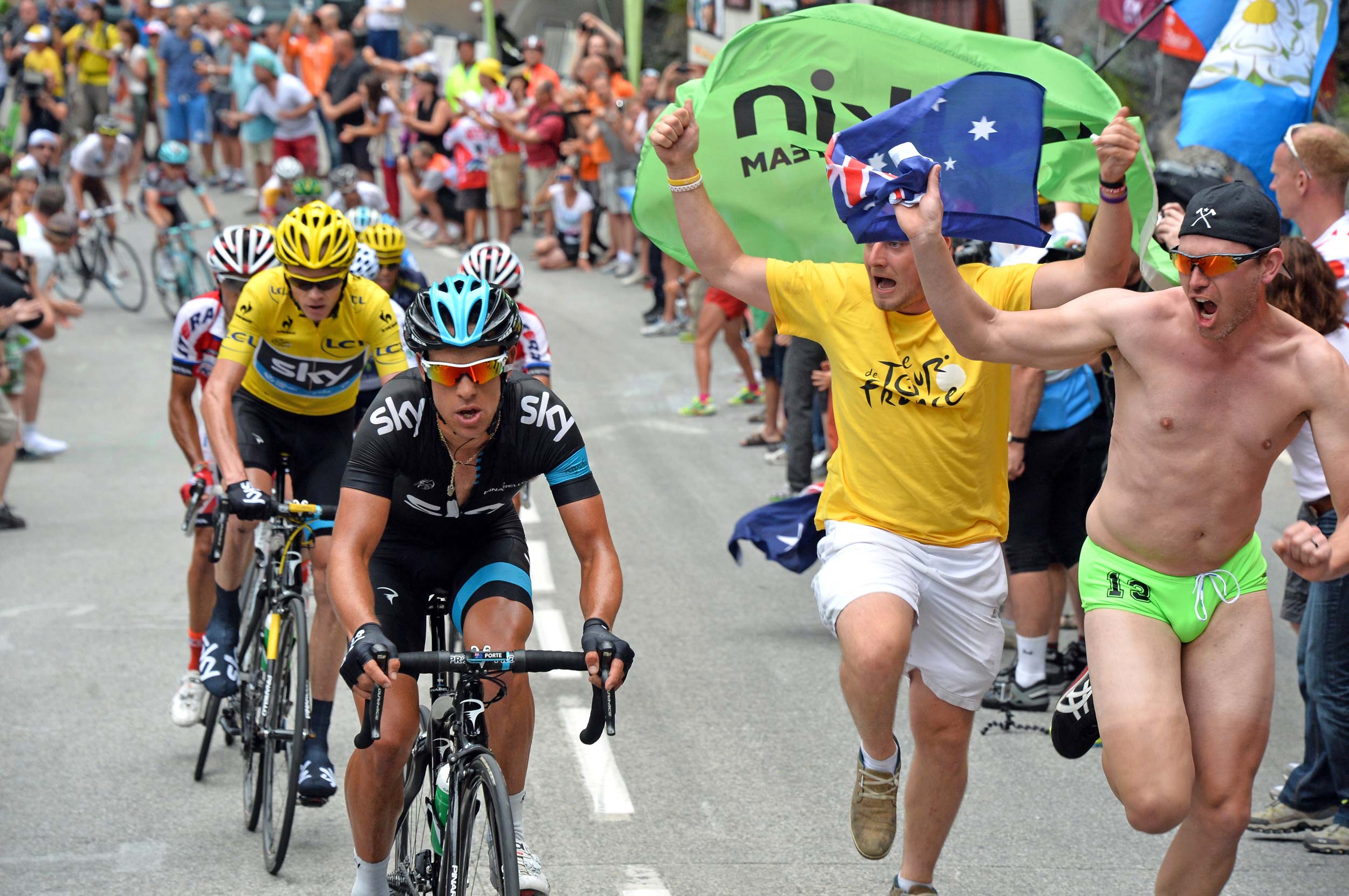 Just before we hit Huez, we happened upon the Flandrien contingent, campervans proudly draped in the yellow Vlaamse Leeuw (Flemish Lion) flags so instantly recognisable in the cycling world. One belonged to a mate of Koen’s, so we pulled in to enjoy some Flemish hospitality. That immediately involved a Belgian beer being thrust into my hand. No, I shouldn’t. But yes, I did. I mean, how could you not?

Pushing on, we were back to negotiating gradients rarely dipping below 8%. Every hairpin bend was one closer to our destination, but the brutality of their gradients made each seem harder than the last. 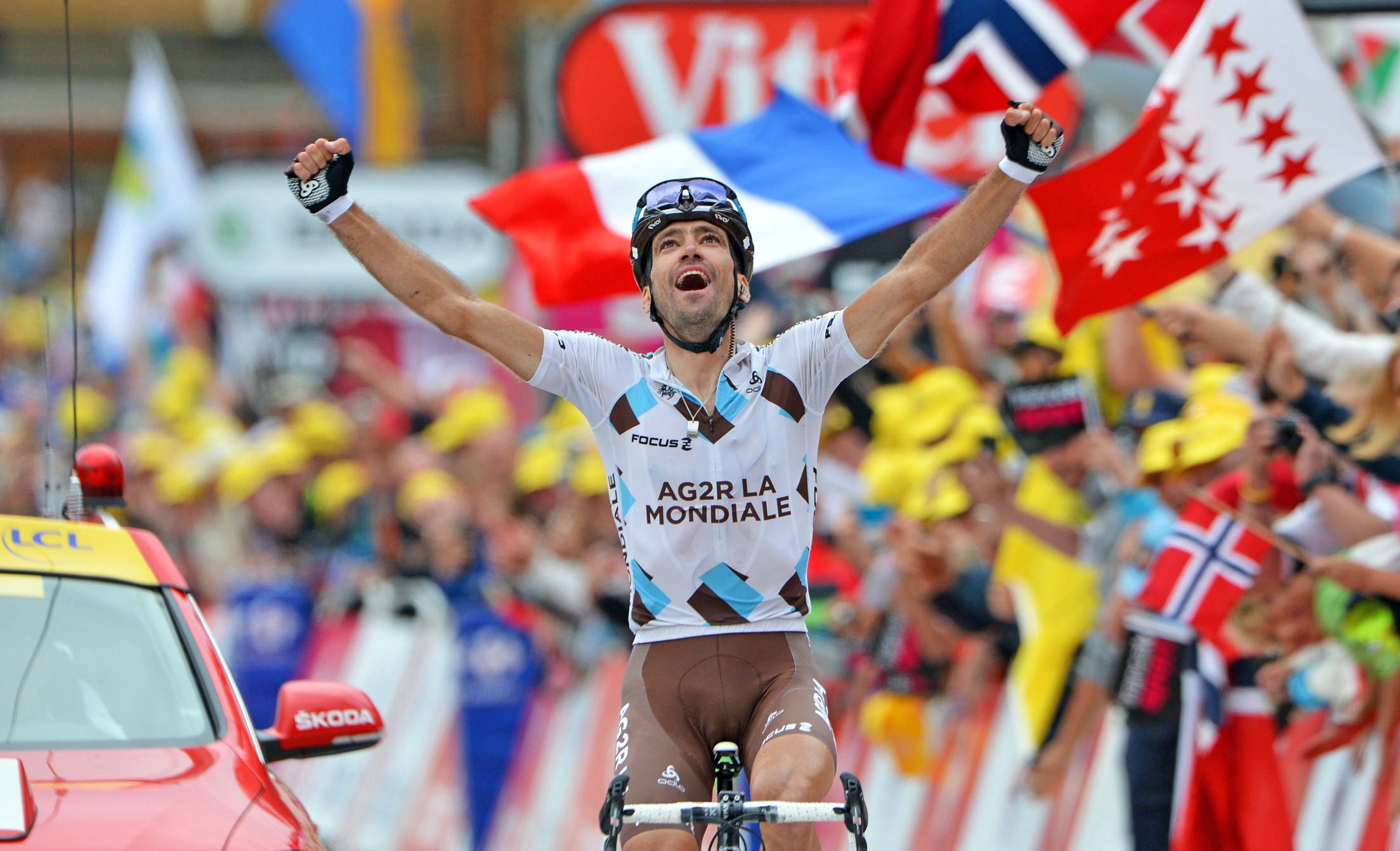 I was running on fumes as we finally sighted the tiny commune of Huez, barely a few brick buildings clinging to the side of the mountain a little shy of the ski resort summit. The rest of the group were already watered, fed and strategically positioned at a bar overlooking the race route, bevvies in hand.

Word reached that the peloton had hit the base of the climb. The atmosphere instantly turned electric. Casual chat now turned to nervous anticipation. Where was race leader Chris Froome? Was Richie Porte piloting him, as he had done the whole Tour? Where was Froome’s biggest threat, two-time Tour winner Alberto Contador? Did he have the legs to attack and bridge the gap to Froome in these closing stages?

While we waited I scurried around to every bakery, fromagerie and boulangerie in sight, desperate for any calories on offer. Alas, the entire hamlet had already been cleaned out, and there wasn’t so much as a mouldy baguette on offer. I settled instead for gels kindly donated by group members taking pity on my plight.

It wasn’t long before the sounds of blaring horns signaled the arrival of team cars, the leading riders not too far behind on their first pass. We gathered at a vantage point directly above the race route, cheering as we spotted Richie Porte pacing Froome, before breaking into a ‘Yell for Cadel’. Unfortunately it was not to be Cadel’s day, the Team BMC leader and 2011 Tour winner having already fallen well out of GC contention. 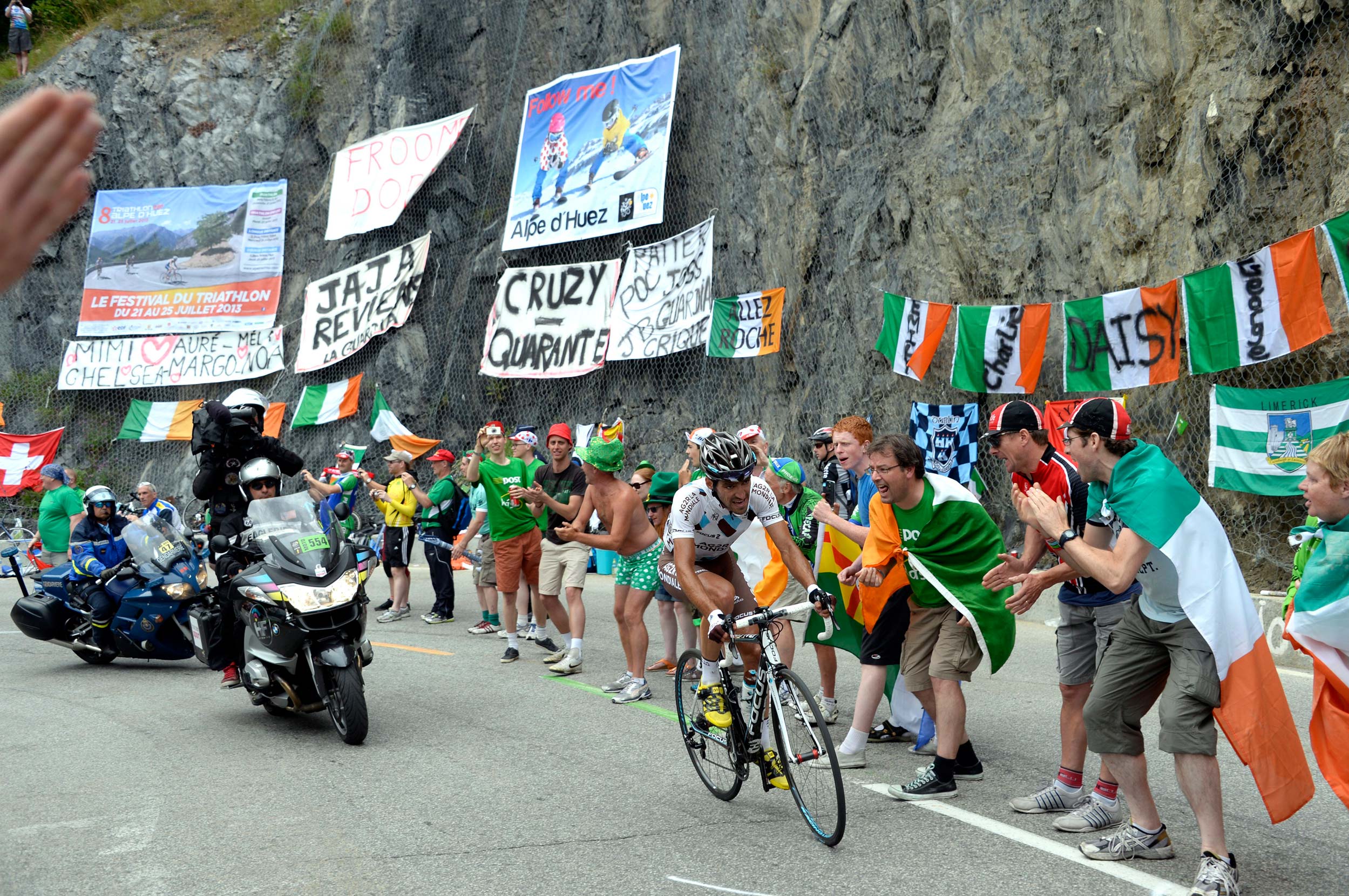 Instead, as the weather closed in and a light drizzle fell, word began to filter that the second climb of Alpe d’Huez was developing into a battle between Cadel’s team-mate, American Tejay van Garderen and Frenchman Christophe Riblon of AG2R La Mondiale. Both had gapped a tiring Alberto Condator, desperately trying to break Froome’s stranglehold on GC on this second-last climbing stage of the 2013 Tour.

It was Riblon who would pass us first and go on to become only the second Frenchman to win atop Alpe d’Huez since Bernard Hinault in 1986 (the first being Pierre Roland in 2011). Froome would go on to claim the first of his four Tour victories in Paris three days later.

As the rain intensified, our group hastily remounted, eager to beat the fading light back down the mountain. Phil Anderson’s intimate knowledge of the region came to the fore, leading the way via a sparsely trafficked backroad.

Switchback alpine corners tackled at speed on rim brakes in freezing rain made for a nervous descent, but within an hour we were all safely ensconced back aboard our coach.

It was a big day out on one of cycling’s most revered climbs. It as the day I bonked on Alpe d’Huez. It was an unforgettable experience.