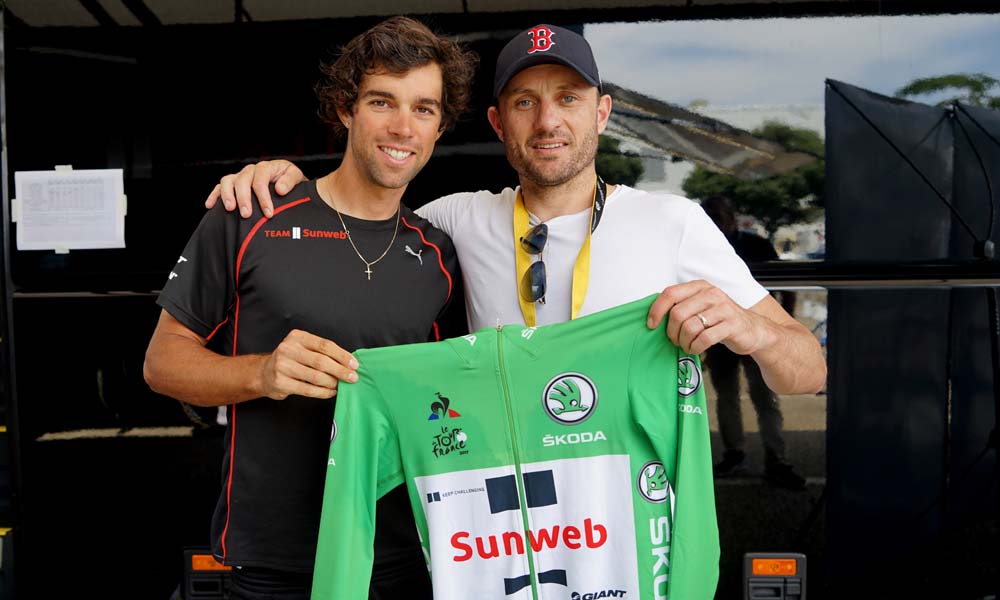 Today another Australian will arrive in Paris wearing a green jersey in the final stage of the Tour de France. We consider what that means to Michael Matthews.

Before the penultimate stage of the 2017 Tour de France, Michael Matthews was relaxed in a way that we hadn’t seen him for the first 16 stages. While he never truly showed tension, it was apparent in the opening two-thirds of the race that the rider from Canberra was encased in the so-called ‘bubble’. This is a place of sanctuary where many riders (and some of the entourage) find themselves during July.

Lock out external influences, minimise distractions, focus only on the task at hand. It’s an approach that’s required in a race like this. And yet it’s probably the one race where this attitude is most difficult to achieve.

Matthews popped the bubble near the end of the Tour. His unassailable points tally allowed him to do that.

There were still two stages for him to race when he climbed out of the team bus to pose for a few photos with another Australian green jersey winner.

Baden Cooke has known Michael Matthews a long time and the pair can now compare notes of what it’s like to win the Tour’s points classification but the manner in which they achieved their successes are entirely different.

In 2003, Cooke would win the green jersey but he wouldn’t be sure about it until the final surge to the final finish line of the Tour. And even then he had to nudge his shoulder ahead of a compatriot who wore green for the stage to Paris. Ultimately, in the ‘Centenaire’ Tour, it was Cooke ahead of Robbie McEwen…

You know that story. It’s been told often and it is a reminder of how vicious the fight for a prize jersey can be. Cooke and McEwen battled all the way to the very end.

Matthews, meanwhile, did his work early and although the rewards took a long time to come by, he could at least relax a little at the end of the race.

He didn’t really have to worry about the TT in Marseille. “I’m just going to get through it and enjoy it,” he laughed shortly after stepping off the team bus. “No need to stress anymore.”

And the Paris stage? Well that comes later today. And, like many others in the peloton of the 104th Tour de France, Matthews could win it. Will he? Maybe. Why not? He’s fast… he’s the ‘best sprinter’ still in the race. He collected the points that he and his team determined he had to acquire and all he has to do to become the third Australian to win the green jersey is reach the finish line on the Champs-Elysées. 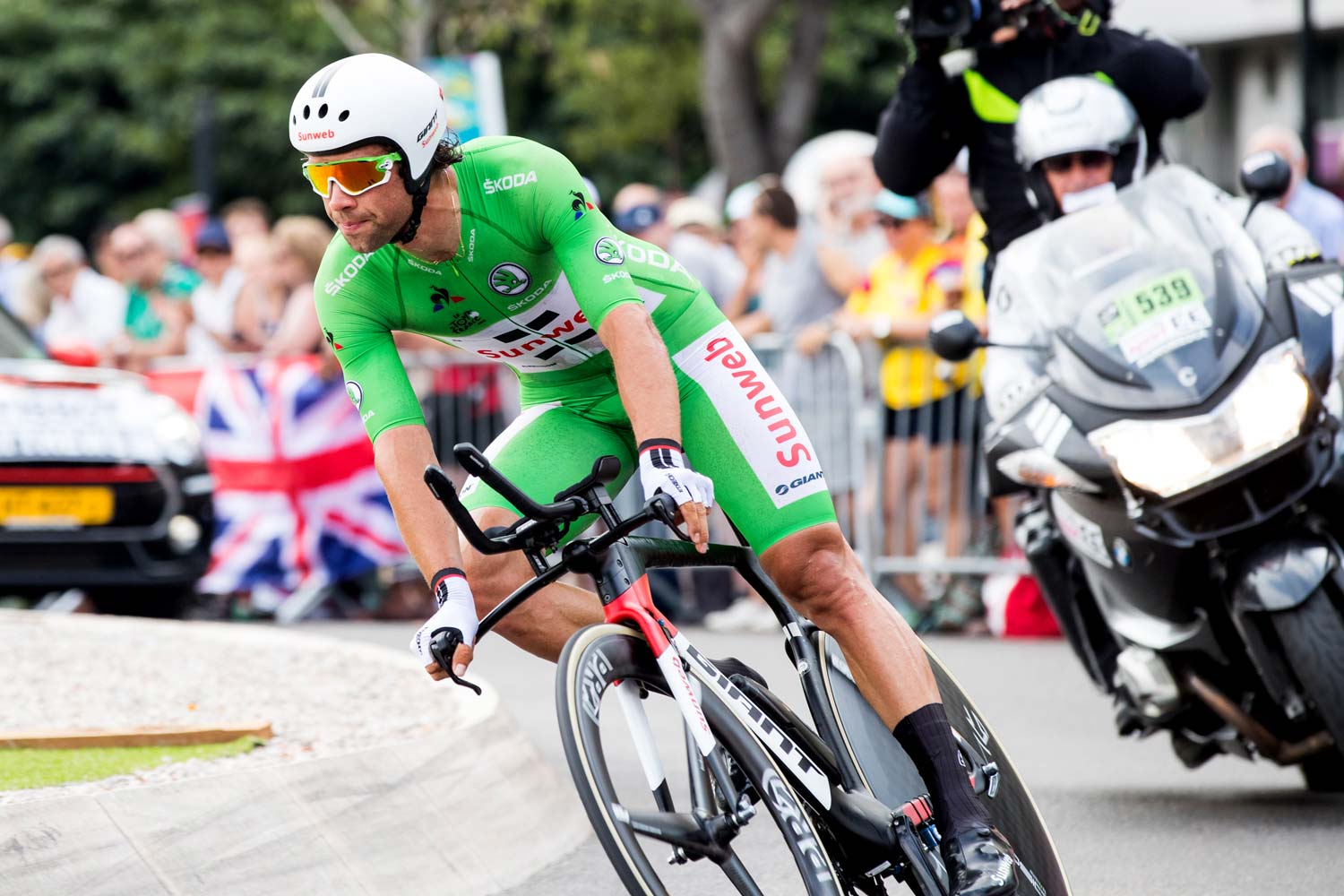 Matthews has won some time trials in the past but in Marseille (above) he was going through the motions of getting a little bit closer to the Parisian podium.

Michael Matthews has a nickname that suggests he’s a right royal showman. According to his wife, he can dance – and sing and entertain – but, these days, he usually does this in their apartment in Monaco.

The days of stepping out on the town were fun but over the years Matthews slowly began to build his bubble. Still operating in the normal world, he could see all around him but some layers were applied so he could shut out any distractions that may limit his chances of achieving his goals.

At the Tour in 2017, it was difficult at times to get much out of Matthews. In Troyes, for example, when we shared a hotel after the stage we swapped text messages about the chance of an uninterrupted catch-up – one away from loudspeakers, other journalists, or the ever present fans that amass around team buses and bike riders in July.

Although only a few doors away, that meeting never happened. He preferred to rest when he could; there was still work to do.

We’d speak often during the Tour. Some times he was happy, one time he was terribly sad. When Marcel Kittel won his fourth stage it all began to dawn on Matthews: this whole plan that he and Team Sunweb had hatched, it wasn’t going to work. That’s what he thought. Chasing points at every opportunity didn’t bother the Australian, but watching the German acquire a huge tally of points day after day, stage after stage, drummed home the message.

Each time Kittel won a stage, he earned 50 points. Multiplied by five and he was a long way towards the 350 that Sunweb had calculated was required for Matthews to claim the green jersey in 2017.

When Matthews won his stages, he earned 30 points each time. Despite success – and plenty of reason to celebrate – he was already 40 points shy of what he would have been if he’d won ‘sprint’ stages. Instead he won ‘intermediate’ stages.

In theory, he won harder races – at least that’s what the profile suggests – but he collected fewer points.

Kittel is fast and powerful and well supported… and highly successful, capable of delivering on promise. He would collect plenty of points and the green jersey seemed secure. But Matthews never conceded.

Despite his frustrations Matthews raced on. He attacked. He climbed. He made the break and he collected intermediate sprint points. By the time it was announced that Kittel had abandoned, the Australian was just nine points behind the German.

To win the race, you’ve got to finish the race. A crash and the subsequent injuries halted Kittel.

On the evening that Matthews famously first slept in his green jersey, I sent an SMS to Katarina Matthews. She plays a significant role in the job of her husband having sacrificed her own career in favour of being as supportive as possible. The green jersey was a goal not just for Matthews and his team but for the marriage partnership. A lot of effort had gone into that first green jersey but when I asked, “Are you happy?” the reply was quick and brief.

Matthews doesn’t just race Kittel, he’s friends with him. There’s mutual respect and admiration and to inherit the points classification lead in the way he did just wasn’t quite right. Katarina will smile and she will be proud, but save that for Paris when she’s there with her husband, able to see him stand on the podium as the green jersey winner in 2017.

At the time the bubble began to burst – when it became apparent that the protracted points acquisition mission was actually delivering the correct balance of figures – the victory seemed likely, but it wasn’t enjoyable. Not yet.

The next morning, she clarified her comment with another SMS: “I’m sad because Kittel is out. 🙁”

That’s not how it’s meant to be. But that’s how it is. The same applies to the other missing green jersey contenders. What would have been in 2017 if Mark Cavendish didn’t crash out and Peter Sagan wasn’t thrown out? We’ll never know. It’s a superfluous concept, a redundant notion for all except conversation. It wasn’t to be: one did crash, the other was disqualified.

In Marseille it was as though Michael Matthews had realised that his life was about to begin again. All the restrictions he had imposed on himself as he applied the layers could soon be plied away. The relief of doing what he set out to do was obvious as he stepped out of the bus for photos with Baden Cooke.

We stood there, three of us, talking about green jerseys and why Matthews has decided not to do any post-Tour criteriums (other than the Saitama one in Japan towards the end of the season). He concluded: “I’m happy with my salary and although it would be nice to earn some extra money, I’ve not seen my family properly for a few years.

“They arrive today. Tomorrow I’ll finish the race. And then I can get on with the rest of my life.” 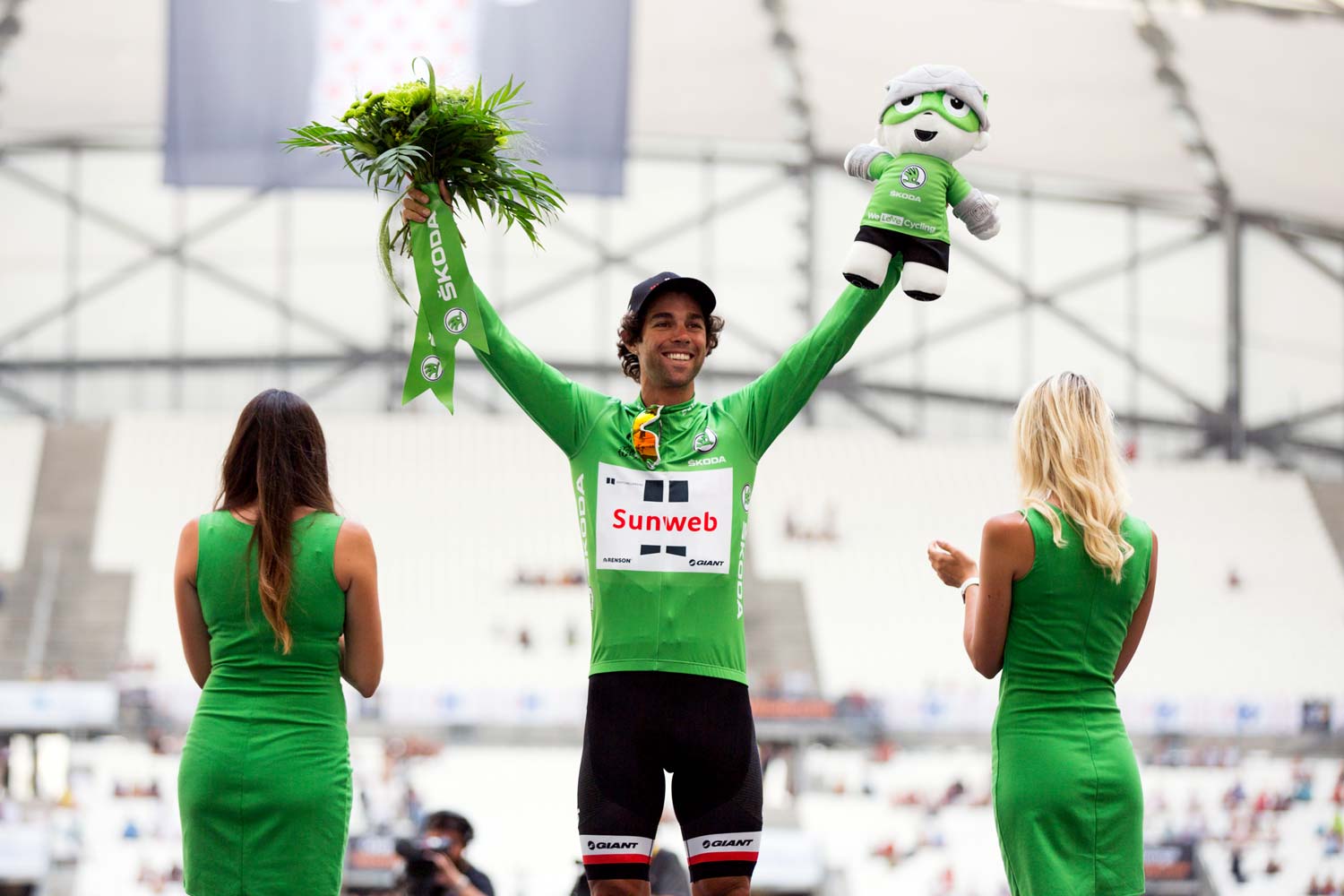