Movember is less about facial hair than it is about looking for solutions to problems that are faced by men every day.
(This is part one of a series about men’s health.)

Twenty-five years ago a mate of a mate found a lump on one of his balls. Six weeks later he was dead. So fast, so efficient, testicular cancer took a 24-year-old’s life before he even had time to learn about what may have saved him. By the time the tumour was discovered, it was too late.

In January a couple of years ago, a mate of mine told me “each day is difficult, but I’m getting through it”. Seven months later he was dead. The weight of the world became too much. He pulled up in a hurry at The Gap late one night, parking his car with purpose – one of the last things he did – then opening the door and running towards his abyss. He didn’t turn back, didn’t shut the car door, didn’t slow down. Didn’t give himself time to reconsider. He ran at the fence and, in one swift movement, bounded over the barricade, across a small patch of grass and jumped off the cliff. His body was found early the next day.

By the time anyone properly began to realise the extent of his depression, it was too late.

Ten years ago a mate explained how he had to start using his left hand for the computer mouse because his favoured right hand was playing up. “They think it’s carpal tunnel,” he told me, “and I’m surprised how well I’m coping using my left hand.” A month after that, he told me the harsh reality: he had MND.

Five years after that, we stood in a room on a scorching hot February evening and celebrated his 40th: him in a wheelchair, me in a crowd of friends while someone poured bubbly into a tower of glasses stacked up beside Anthony. After admiring the cascade, I sauntered over, grabbed the top glass and began a toast to my mate who was nearing the end of his life.

Before my words came out, 50 glasses crashed to the floor and bubbles dissipated down between the cracks in the tiles. He smiled, took the one full glass out of my hand and said, “Thanks Rob. That’s what mates are for.”

Less than a year after the great Champagne Glass Crash of February 2012, Anthony was dead. For years his muscles slowly degenerated. Asphyxiation got him in the end, his chest and lungs just couldn’t cope with the need to breathe.

He had time to prepare. MND does that to a bloke. First comes a minor complaint, often written off as some other ailment (and commonly ignored). After that, there’s the visit to the doctor, the sequence of tests, the examinations, and eventually the brutal diagnosis. It may vary from person to person, but the conclusion isn’t pretty.

By the time Anthony and I last saw each other, he was confined to a bed paralysed by inactive muscles and in excruciating pain because a carer had decided to give him an impromptu foot massage. He responded in shock, jerking his leg upwards and, in so doing, tore tendons off muscles from his pelvis to his ankle.

MND was the reason. The body was shutting down – while his mind remained as alert as ever – and, slowly but surely, all that was holding him together started rotting: muscles, tendons and more, but not his spirit or sense of humour. He told jokes to the end, and he could always make me laugh, but the finale wasn’t funny at all.

The agony of the tendon damage necessitated the use of morphine and the final weeks of his life weren’t as coherent as they otherwise may have been.

While planning his own farewell, Anthony insisted that there wasn’t to be a funeral service. He didn’t want the fuss. Instead, he wanted some family at the crematorium, for Queen’s ‘Flash’ to be played “as loud as possible”, and for him to be “rolled into the oven” when Freddy sang ‘King of the impossible’.

Although I never got to ask him, I now believe the inspiration was one of the closing lines: ‘What do you mean, Flash Gordon approaching? Open fire…!’ Such was his sense of humour. But that’ll now be a hypothesis forever more.

Anthony’s mother later told me that others visiting the crematorium that day were more than a little surprised to hear such a song at such a volume in such a setting. It’s how he would have liked it, a little bit of the unexpected because of him – right to the end.

Anthony originally asked to be cremated while wearing his favourite black T-Shirt, the one with ‘Dead Man’ in white all-caps Helvetica Bold on the front. As his body degenerated, he changed his mind. His mother and he agreed on more formal attire.

During his final weeks, he dictated a letter to me outlining his memories of our friendship. Some of it was kind, some was curious recollections of nights out I’d long forgotten, and all of it was typical Anthony. In the final paragraph, it became obvious just how well he knew me. And, I should add, he got the last laugh – something I’m still very pleased about. He would be too.

I’d put off breaking the wax seal on the envelope, not wanting to read his farewell note until I felt I was up to the inevitable upset. Eventually, on a warm spring Sunday afternoon a few weeks after he died, I worked up the courage to read what he had to say. I bought a six-pack of Cooper’s Pale Ale, went to a quiet spot he knew well, twisted the top off a bottle, and cracked the wax.

Tears fell as I worked my way through his collection of anecdotes and by the time I got to the final line, I was smiling at the words I read through blurred vision.

“And,” he concluded, “if you’re not sitting at our spot with a Cooper’s green in your hand, you can get fucked – because it’s clear you don’t know me.”

There was nothing that could be done to stop motor neurone disease destroying that life. From the moment of diagnosis, he knew what the outcome was going to be. Initially he wanted death to come quickly but eventually he fought hard for every extra day.

Through the process of dying, he rediscovered the beauty of living.

Three blokes. Three deaths. Three entirely different circumstances. Two of them may have been preventable if the cause was detected earlier.

We hear about these often and know how devastating they can be. And so when I read about one charity or another ‘raising awareness’ about something, I wonder what benefit that provides. The older I get, the more aware I become about cancer and MND and suicide and, of course, the myriad other things that cause devastation for the families and friends who are left behind.

Awareness isn’t a cure, but it sure is better than ignorance.

If my mate’s mate had been more aware in 1994, he may have considered reporting his swollen testicle before the cancer spread.

If I’d asked more about the “difficult” days faced by a friend, perhaps he would have talked more, ruminated less, and not felt the suffocating desperation that compelled him to jump.

If the funding that comes from the ‘ice bucket challenge’ – and a range of other charity initiatives – serves to find a cure for motor neurone disease, many would be spared watching the slow demise of people in their prime.

These final points are hypothetical scenarios that cannot alter the tragic outcomes. They also serve as one way to explain why there’s hair above my lips this month.

A moustache on my face isn’t going to save the world. But moustaches on many faces illustrates that there is a growing movement of men who are teaming up to try and effect positive change (and raise some funds along the way). 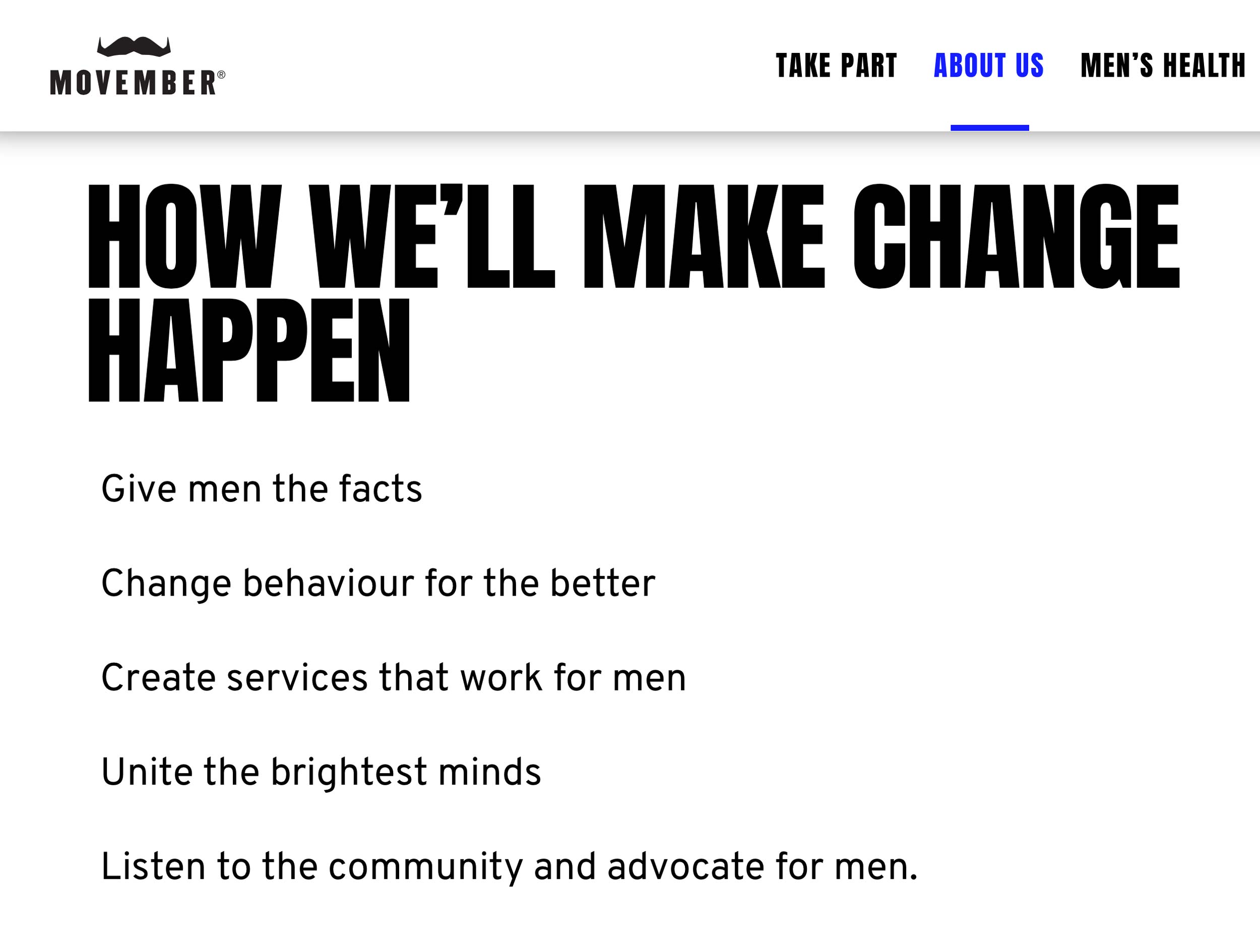 “We’re doing what others can’t,” says the Movember website.

“We unite experts from around the world to collaborate on projects that will fundamentally change the way men in need are treated and supported. To ensure our impact is significant, far-reaching and long-lasting, we prioritise funding for the three biggest health issues facing men: prostate cancer, testicular cancer, mental health and suicide prevention.” 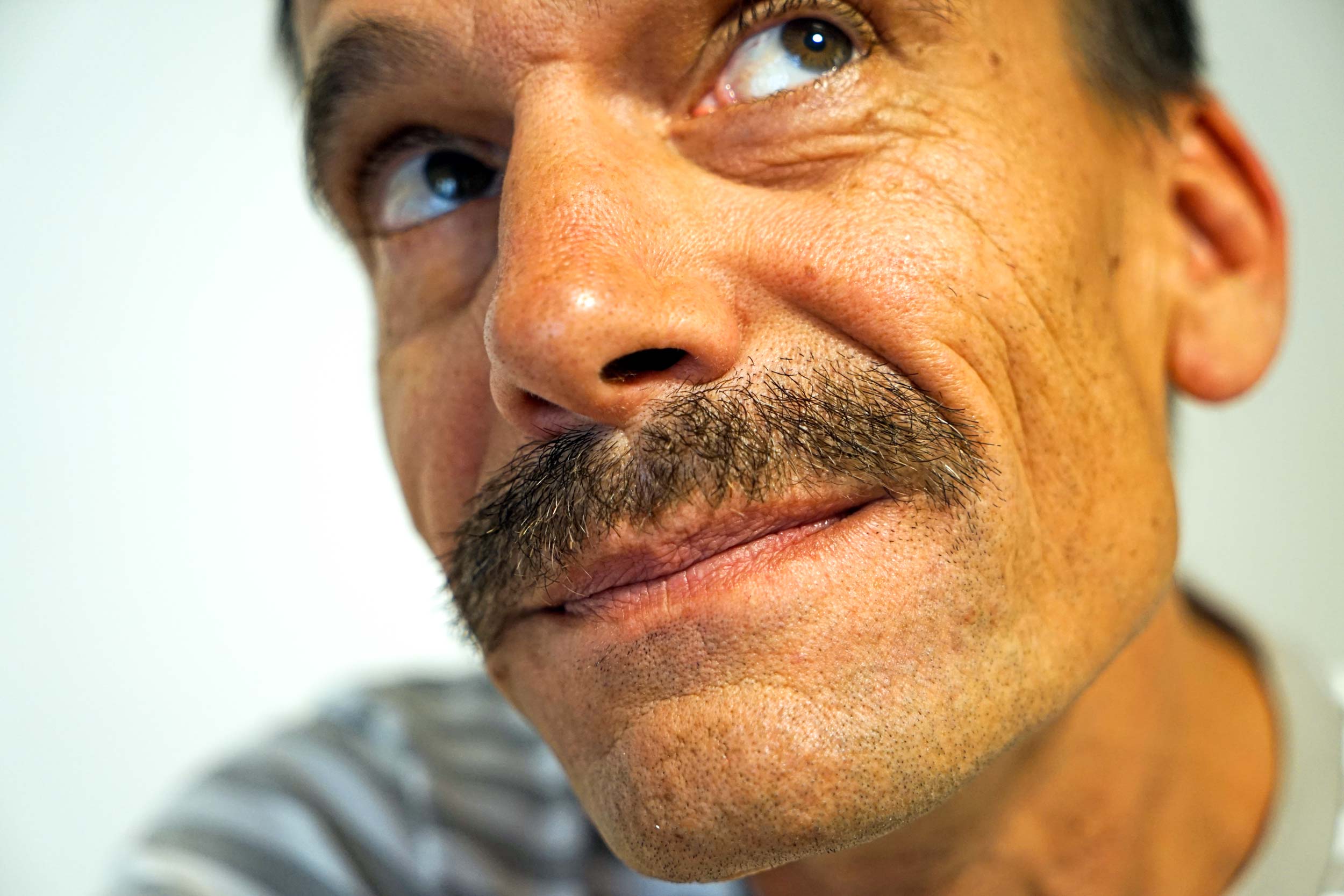 If you ask my family, Movember isn’t pretty. I’ve been told I’d get more money to shave the mo’ off than if I keep growing it all month. I’m the first to admit that it looks terrible but I’m going to see it through.

The mo’ serves no purpose. So far, my part in the charity push has raised only $150 but I’ve started to realise it’s not only about the money. There’s more to it. The moustache has become a visual cue for conversation.

From there the discussion can go on many tangents and the one I’ve avoided is the one asking for donations. Instead, it’s the discussion itself which has value.

There are a range of answers but near the top of my list is something obvious to me: if blokes talked more about things they’ve traditionally kept to themselves, they might find solutions. Or they might even find the problem.

And the only way to solve a problem is to know what it is.