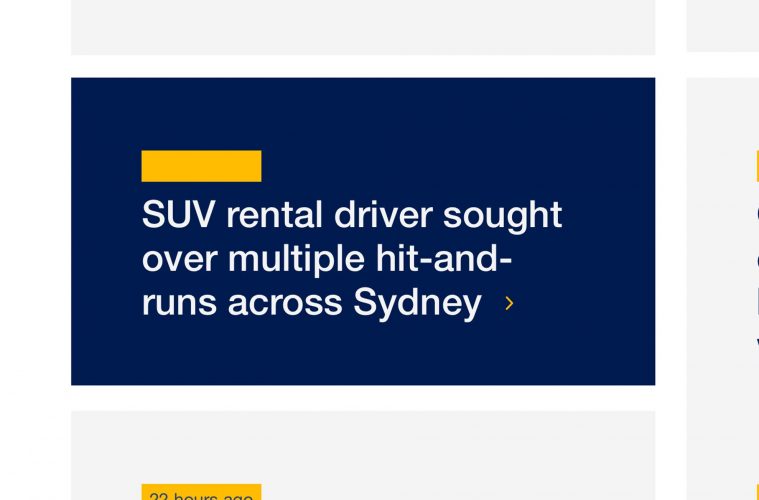 NSW Police are investigating the actions of 35-year-old man arrested today after being implicated in a series of eight hit-and-run incidents in Sydney yesterday.

The it seems too implausible to be true but the details are spelled out on the NSW Police media site:

At 8.20am Sunday 19 July 2020, Brisbane Water Highway Patrol stopped a grey Holden Equinox on the M1 at Bar Point and the driver was issued a traffic infringement notice for speeding more than 45km/h. The driver, a 35-year-old man from Queensland, had his licence suspended on the spot.

Despite the suspension, less than an hour later at 9:10am, the same vehicle was involved in a collision with a cyclist on the Pacific Highway at Lindfield. The 48-year-old male cyclist suffered abrasions to his hip and elbow.

About five minutes later – and 2km south of the first collision – the same SUV hit another cyclist; this time a 55-year-old man suffered five fractured ribs and a fractured collarbone; he remains in Royal North Shore Hospital.

Both times the driver allegedly left the scene without rendering assistance or providing details.

Shortly after 9.35am, the same vehicle was driving the Eastern Distributor Tunnel southbound at Woolloomooloo, when a 2012-model Mercedes C220 was hit from behind by a SUV matching the description. The sedan spun out, blocking all three lanes and the SUV did not stop.

The driver, a 39-year-old man, was taken to St Vincent’s Hospital to be checked as a precaution. He sustained bruising and swelling in the incident.

The SMH website reports that a man has been arrested but there is not further update on the police media site.

But the initial report, explains details of what happened after the crash in the ED tunnel:

Only minutes later, a Land Rover Sport, being driven by a 52-year-old man, was hit by a SUV as the vehicles were travelling east along Alison Road at Kensington. The SUV failed to stop.

At 9.38am, the 36-year-old man driving a WRX witnessed the Kensington crash and was noting the SUV’s number plate when – police allege – the SUV driver deliberately reversed towards him, causing another collision with a Mitsubishi Eclipse. The SUV then drove from the scene without exchanging details.

At 10am, a 36-year-old man was cycling west along Perry Street at Matraville when he was hit from behind by the SUV, knocking him off his bike. He sustained cuts to his left elbow and back. The SUV did not stop.

At 10.30am, a 39-year-old woman was driving her Forester along Bridge Road at Glebe, when she was struck by an SUV travelling in the same direction. The SUV driver did not stop.

The last linked incident has been reported from Lane Cove at 11.15am when a 59-year-old woman was driving her Subaru Outback north along Epping Road. She has told police an Equinox SUV drove beside her and deliberately swerved into her lane and hit her before leaving the scene.

This happened a day after the anniversary of the accident involving Amy Gillett, when road safety was high on the minds of many cyclists. I was in Lindfield roughly an hour after the accident and know how many riders were out on their bikes in Sydney on a sunny Sunday morning.

It is shocking on so many levels and surely answers will be forthcoming but for now, we wish all those involved in these incidents are recovering.

RIDE Media has been in contact with NSW Police but is yet to receive any response.