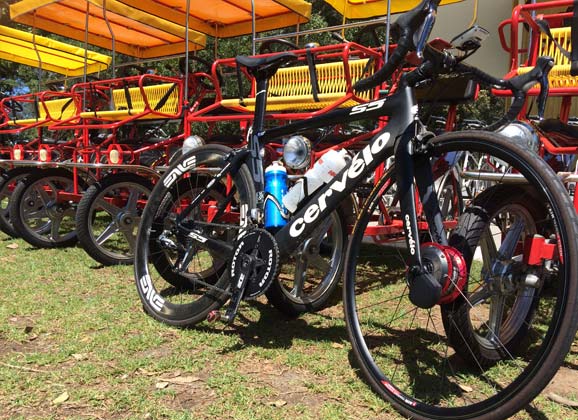 Nathan Haas: Taking the AirHub to the park

In the current issue of RIDE Cycling Review, you’ll find a review of the new training wheel created by Michael Freiberg. It’s introduces a whole new concept of training by creating resistance via a large hub on the front wheel of your bike. Once paired to a iPod or iPhone (or an Android device) the user can adjust the resistance based on heart rate, wattage or CdA (coefficient drag area).

Adam Hansen offered his opinion, stating: “It opens up a lot of opportunities for me.”

And, in the weeks before he set off for another season of international competition, Nathan Haas went riding with his father and, thanks to the AirHub, got some quality training time in too! Haas explains his concerns and then responds to them… 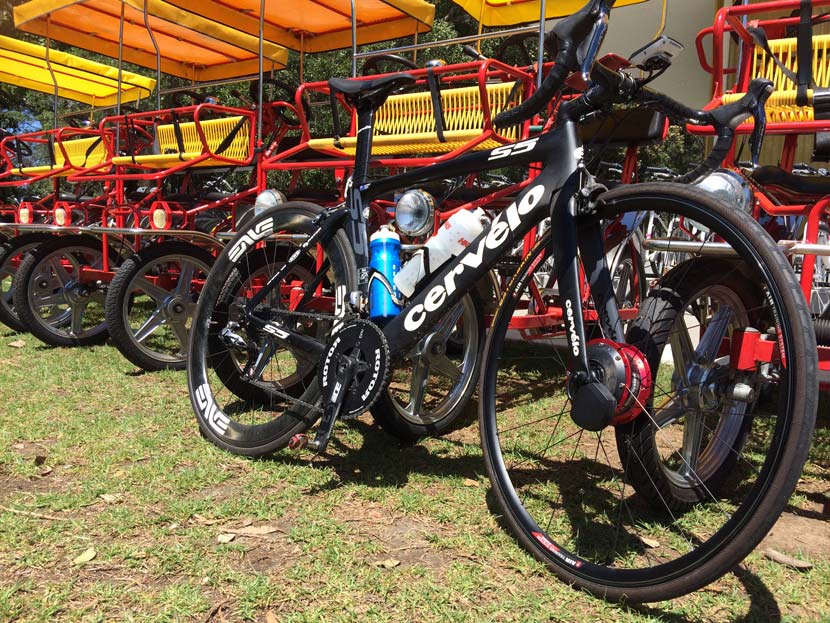 A race bike and more social riding machines… Nathan Haas believes he could get a solid work-out while riding with family and friends.

Air Hub: “Why aren’t more things in my life this easy?!”

I’m always looking for an easier way to train – nay, a better way. My sad little secret, I regrettably and rarely admit to, is that I hate wasting my time on a ride. I hate freewheeling when somebody’s on the front faffing off about whatever, forgetting to pedal, leaving me just wanting to ride off.

I love riding with my friends and family, but I have to remind anybody thinking I’m the whinger for having this sentiment.

The ride is my work, so I always feel torn between doing the efforts that are right, and keeping it real and riding with people.

So where does this lead me? Well, right now it’s got me looking at a bike wheel – a pretty darn ugly, heavy, confusing looking bike wheel.

I’d heard a bit about this funny looking wheel through guys like Luke Durbridge and a few other mates who were saying, ‘Did you hear mate about Freiberg reinventing the wheel?’ It had me intrigued but after pulling the wheel out of the box I had second thoughts. It just looked too confusing. I hate tricky technology, especially when it takes moments or pairing, or zero’ing, or technical mumbo-jumbo.

Now, since I was given the wheel so as to test it, it would be a barely passable report if I left it at that so, with teeth clenched in anticipation for a ‘Bugger This’ moment, I put the wheel in, heart rate strap on, iPod on and beep! This device was paired and ready to go… well, I’ll be damned! It was that easy. This is a big tick for a luddite like me, huge in fact.

So, let’s back track a bit to that little secret of mine. The one about me being an anti-social Watts-focused twat.

The concept behind this technology is to create training load when your environment doesn’t facilitate it. So, in theory, with this wheel I can ride in my dad’s bunch in Sydney’s eastern suburbs and still get the training load I want whilst going whatever speed his bunch goes – fast or slow, hilly or flat.

So yes, this concept – if it works – means my social anxiety would be relaxed, whilst my heart rate stays nice and high. Please work… pretty please. 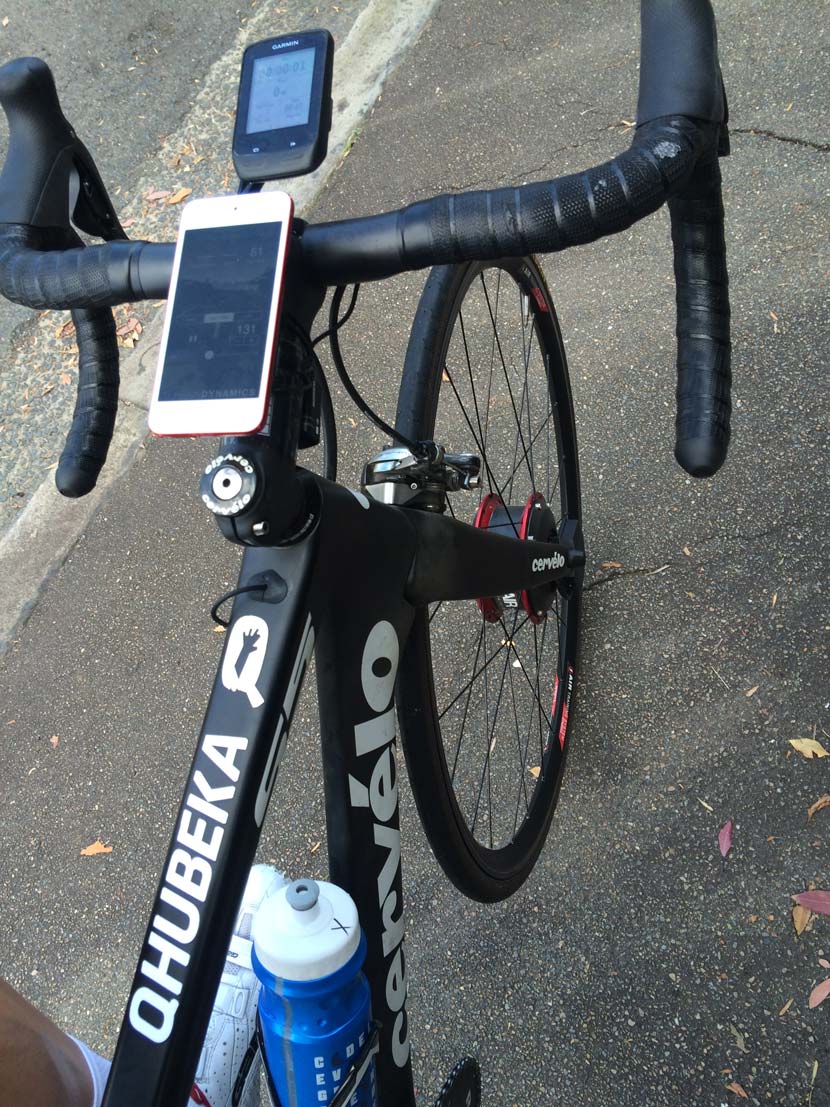 On the road: the lessons learned

So… wheel in, all’s working. But then a few questions come to the fore.

1. Does it feel natural?

2. Is it actually social?

3. Is it easy to use the software?

4. Does changing the software affect the power resistance in real time?

5. Is it safe on downhills and through corners with the extra load on the front wheel?

7. If the power is on, will the ride feel like a strength effort or can I still have a light, high, fluffy cadence?

I got riding and worked out the best way to explain the wheel and its benefits is to explain how the ride went with a few data points.

I rode for two hours and 45 minutes.

These are the metrics I believed to be relevant, so I’ll keep it simple and just show you those, Occam’s razor style.

So my findings? Again, I want to keep it simple because, to be frank, it’s either something I’d suggest using or not; it’s either a tick or fail.

1. Yes, it feels very natural. Not at all like the front brake is just on; more like it’s a headwind – all day. Evaluation: tick.

2. The noise, honestly, is not very social. It sounds like my bike is broken. Or worse, about to break. It is something that I got used to, but everybody I passed in Centennial Park looked at me. Still, that’s not always bad, if you like being noticed… but, back to the answers: for me – the social aspect – for being able to train with friends: tick.

For being able to talk with my friends while I’m riding…? Alas, this is more of a fail.

3. The iPhone app is too easy! It’s so simple, in fact, that it has me concerned: why aren’t more things in my life this easy?! Huge tick!

4. If I had my heart rate set to stay above 138bpm, the very second that I fell under that zone the resistance kicked in; conversely, when I was above it it turned off. There is no delay. It’s actually shocking how rapidly it responds! The same sentiment can be repeated in relation to power. It’s actually incredible. That’s all I can say. Tick!

5. Safety was my biggest concern so in true fashion I ignored my own safety and went full gas! I went crazy on a few descents – even flying as fast as I could through off-cambered turns to see how the wheel would respond. What I found is that, because the wheel is heavy – and that when you back off the power before you turn – the resistance comes on and slows you down again. I just couldn’t go fast enough to make the bike feel nervous at all. Totally safe! Tick!

6. Riding – or, rather, training – in traffic was another area I had concerns about. At one point, when I had to jam it to make a safe gap, the extra resistance had me. If I was more fatigued, I’m guessing I could have been running it a bit close. But there’s a simple solution: in traffic, just turn the power resistance off. So, again: tick!

7. So cadence… this was my biggest worry from a training/torque-load perspective. But if you look at my average power for the ride, 255 watts – which is very high for rolling around at only 27km/h – you’d think my cadence would be super low. But no! It was a light, fluffy 92 cadence. So I could definitely see myself using this on days that I don’t want to ride solo. Big tick! 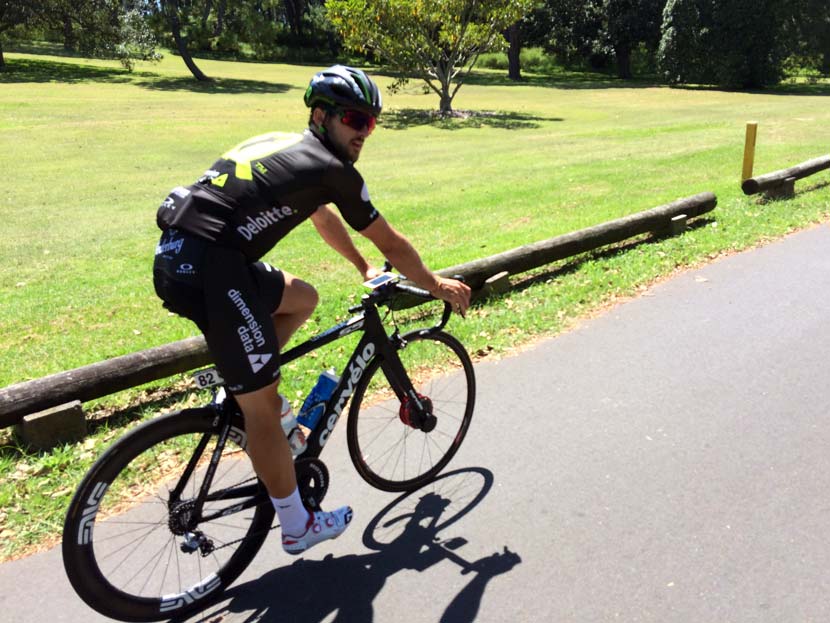 All in all it was really just the noise and extra weight of the AirHub wheel that has put me off a little but the benefits outweighed any of that by a long, long way!

I don’t know if this wheel is for everybody. Most people are looking for a faster wheel, something to keep training or social rides faster and more exciting. But that’s not the point of this one; it’s the exact opposite in fact and once you get your head about the concept, you realise how many benefits there are.

For anybody more focused on form, on training load, or who just likes making their life harder for no reason (that’s my life in a nutshell) this is something you should explore.

The wheel is safe, it’s easy to use and I really don’t think you could break it.

Still, I’d like to see the hub built up onto an ENVE rim sometime – pimp it up with some carbon to move away from the alloy agricultural look it’s currently sporting.

Testing this was, however, all about the technology, so don’t stress too much on what aesthetic blabber I go on about. After all, I wear lycra at work. 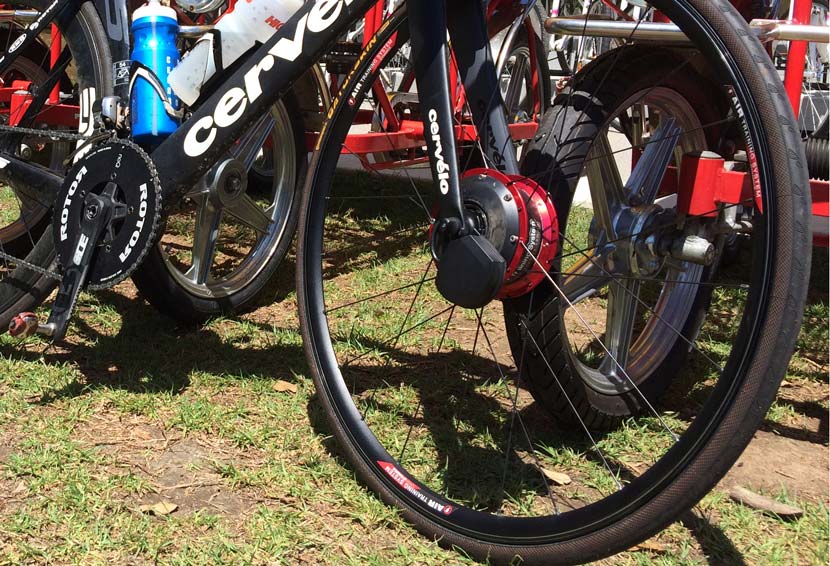