Nostalgia: How the cycling season used to begin

Images from a time cycling seems to have forgotten remind us how dramatically the pro scene has changed in a few short decades. Here’s a selection of shots from the archives of French photographer Eric Franceschi, and a short story about bike racing ‘back in the day’ by François Thomazeau. 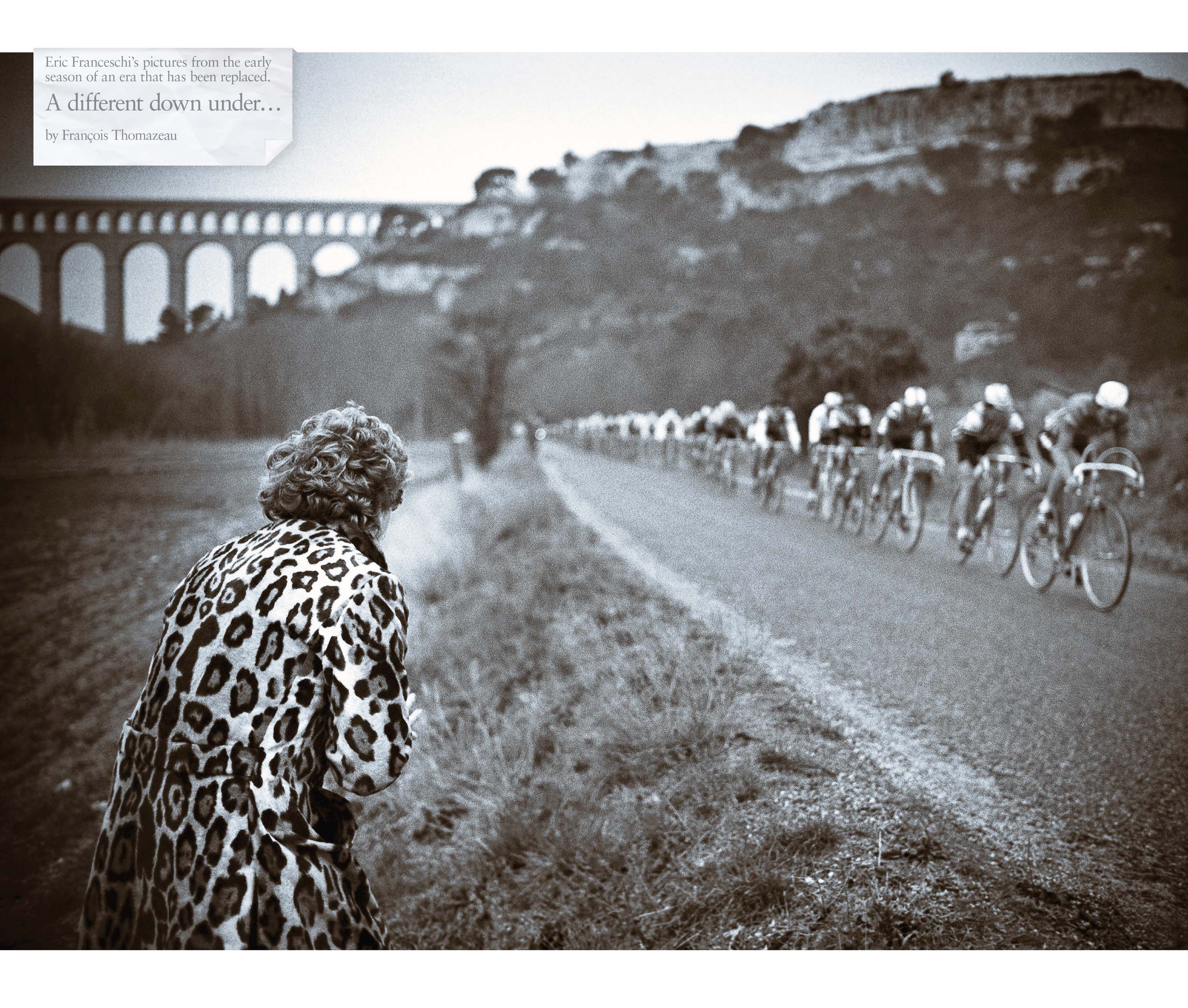 In the ‘good old days’, the road cycling season also started down under. That is down under the Loire, the river splitting France into the wealthy industrial north and the warm, picturesque south.

Globalisation of the sport has changed all that in the last 30 years.

Back in those days the peloton boasted only one Australian, Phil Anderson. A lot has happened in that time. The road racing calendar begins earlier than ever before and down under now relates to Adelaide, not the Mediterranean coast. 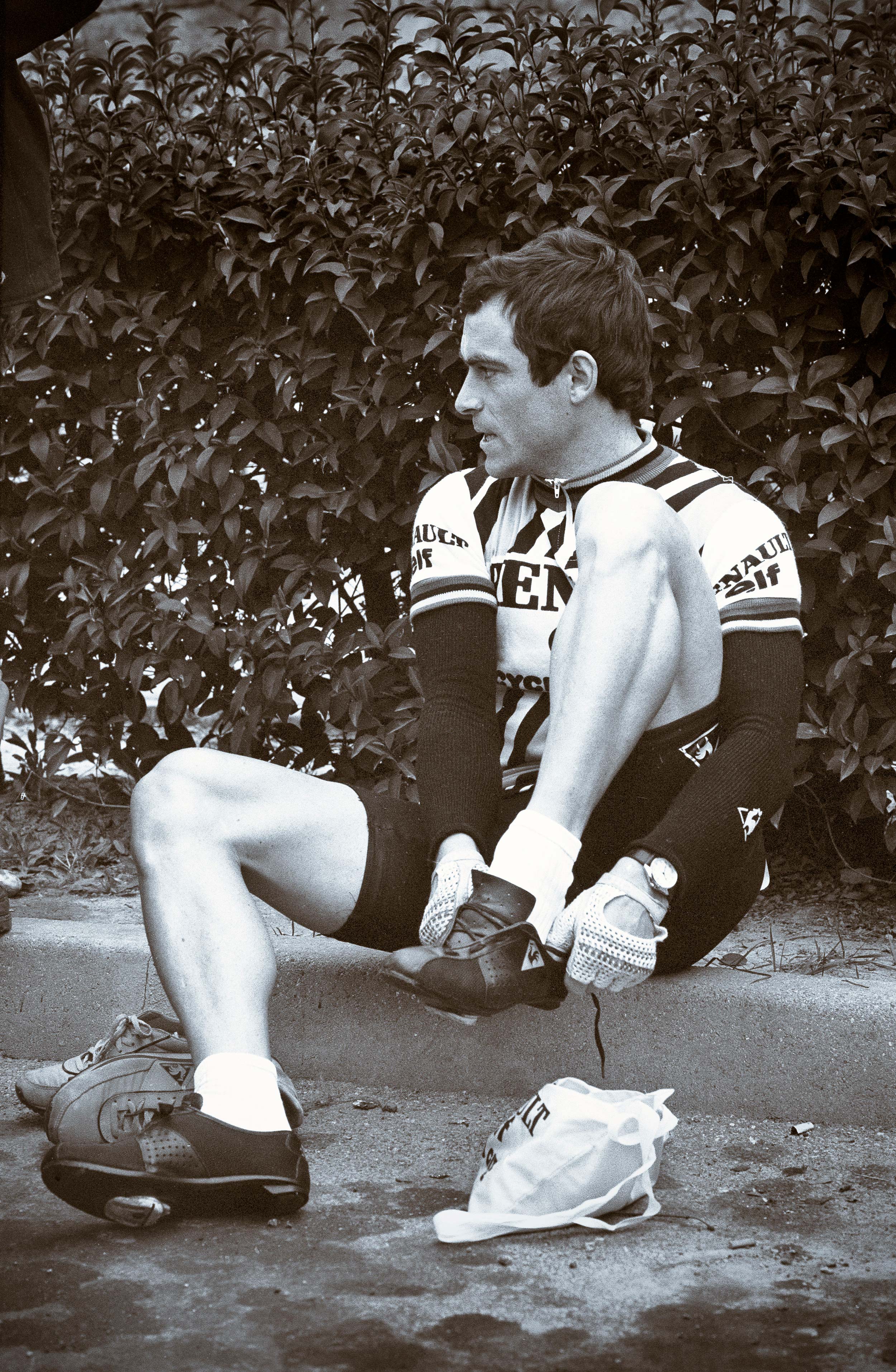 In the past it wasn’t until the end of February that we got to see colours of the new team outfits in races. Event names were altered to reflect their standing in the season: the GP de la Marseillaise was also known as the GP d’Ouverture – opening the season near the port city of Marseille. No more.

It wasn’t so long ago that most newspapers only ran black and white pictures, allowing a major team like Peugeot to sport two-tone jerseys. Still, stuck within the borders of the ‘Old Continent’, with Frenchmen, Italians, Belgians and Spaniards leading the way, cycling remained a colourful sport all the same. And it was so often because of the crowds. 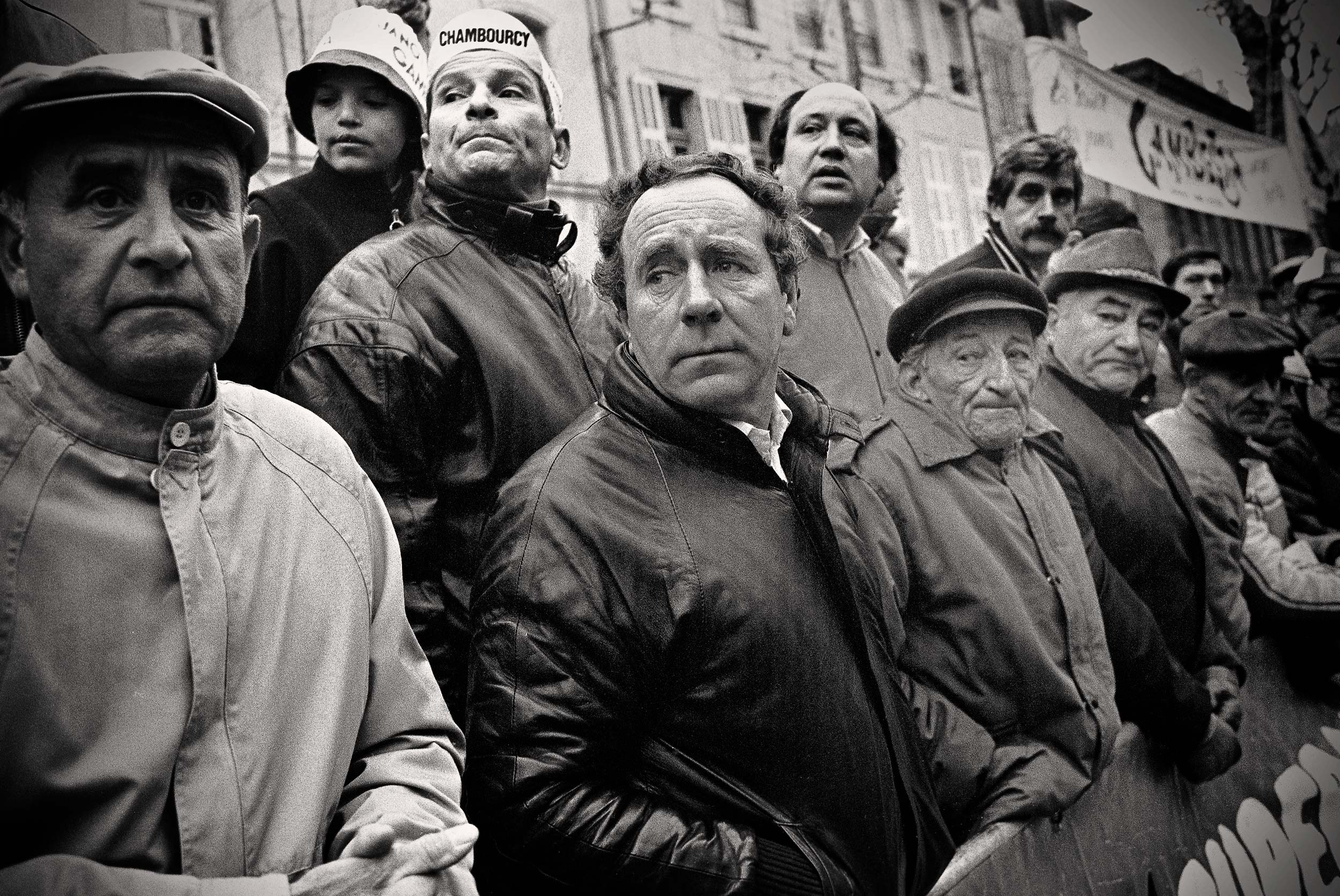 Eric Franceschi’s pictures of the early season races in the south of France in the 1980s reveal what a huge sport cycling remained in the country at that time.

This is not July when the summer weather lures the fans out for the Tour de France, it is late February and early March, when winter is hardly over, when the wind bites hard and the cold remains sharp. The early months in Europe are no holiday time either.

Still, in Franceschi’s images thousands of spectators are waiting by the finish line to catch a glimpse of the champions. 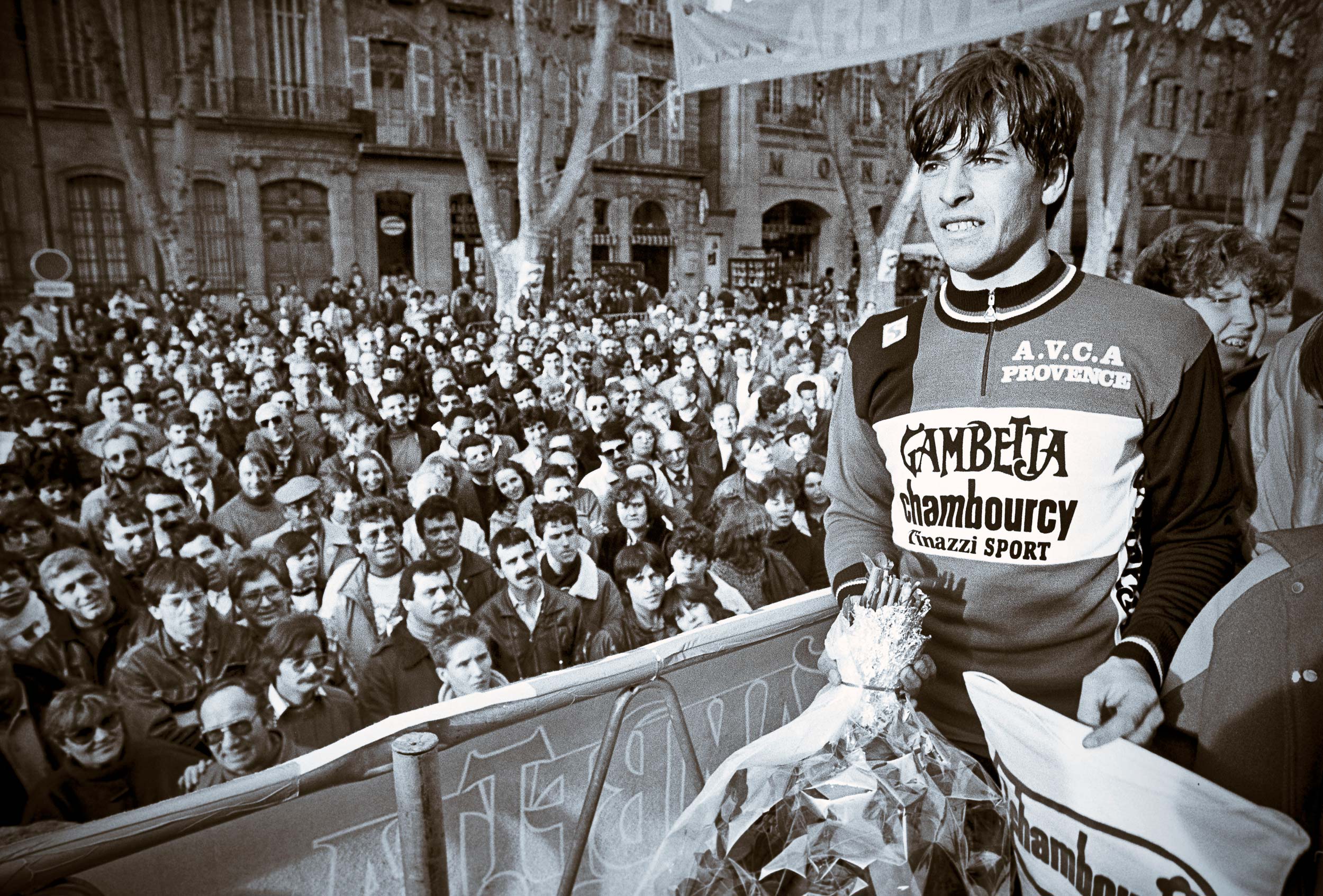 Most of the residents in the wine-growing regions of Languedoc and Provence are farmers – like the fathers of Hinault, Thévenet or another from the days when Peugeot sponsored a cycling team, Jean-René Bernaudeau. They came to see young guys who could be their own kids. And they are so easy to identify with their cloth caps on, no sunglasses, no helmets, hardly any television coverage, hardly any journalists.

In the 1980s, there were no team buses for the riders to retreat in when the race was over. Yes, you could actually talk to these people, smell the liniments, touch their bikes… you could feel like you were part of something.

That’s now happening earlier, at a different down under.

It’s a summer start in the modern era, when the sun shines bright and a holiday atmosphere entices the crowds into the heat. 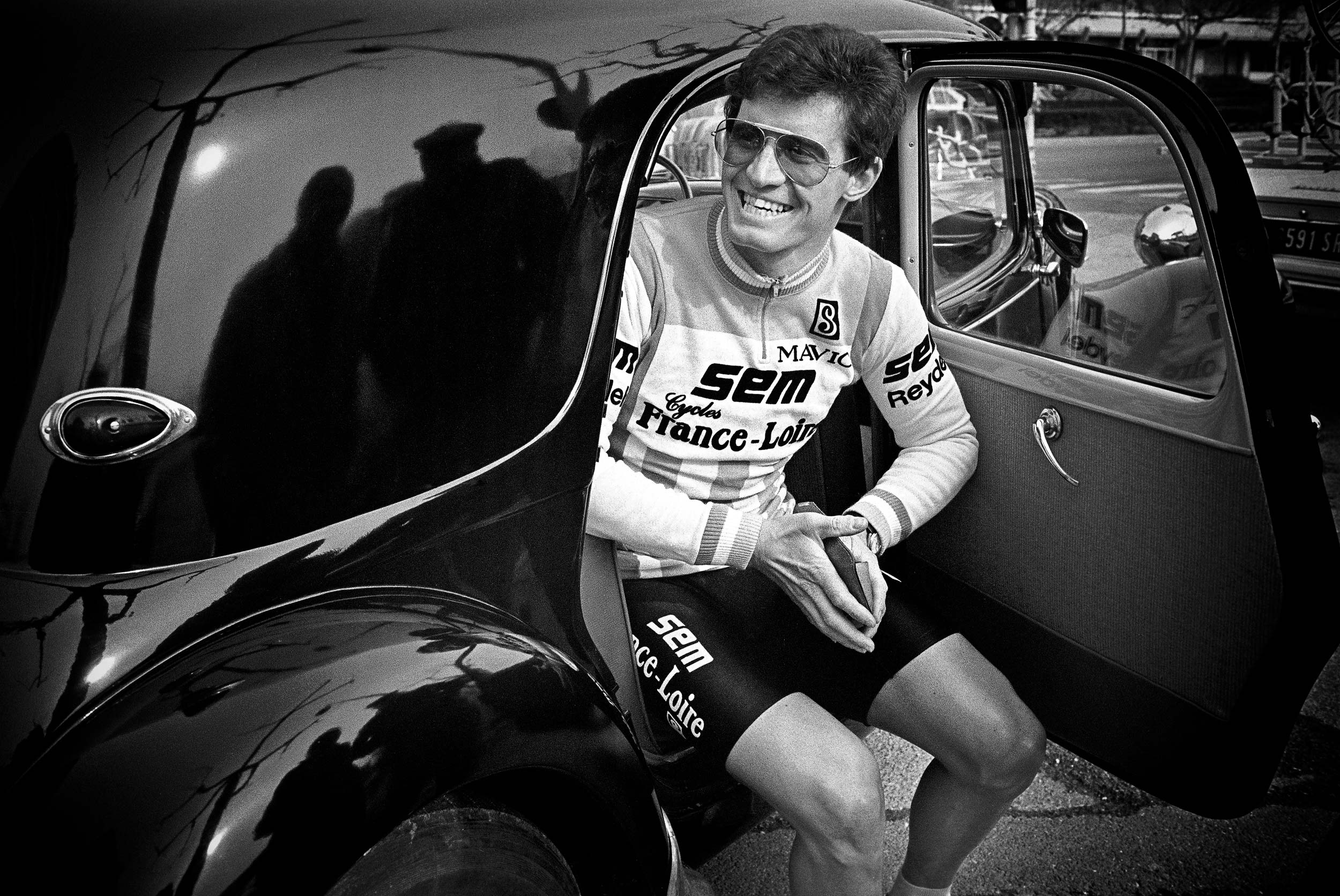 Marcel Tinazzi emerges from a car before the start of Grand Prix La Marseillaise.

These photos remind us of what it was once like. Franceschi unwittingly captured the end of an era.

By 1986, French tycoon Bernard Tapie would pour big money into the sport and turn an American into a Tour de France winner. And nothing would ever be the same again.

Of course, there were signs that perhaps, one July day, an Australian would also be crowned the Tour champion on the Champs-Elysées. Anderson rode Etoile de Besseges in 1985. He had become a household name in France since wearing the celebrated maillot jaune in 1981. But he was still the exception to the rule… 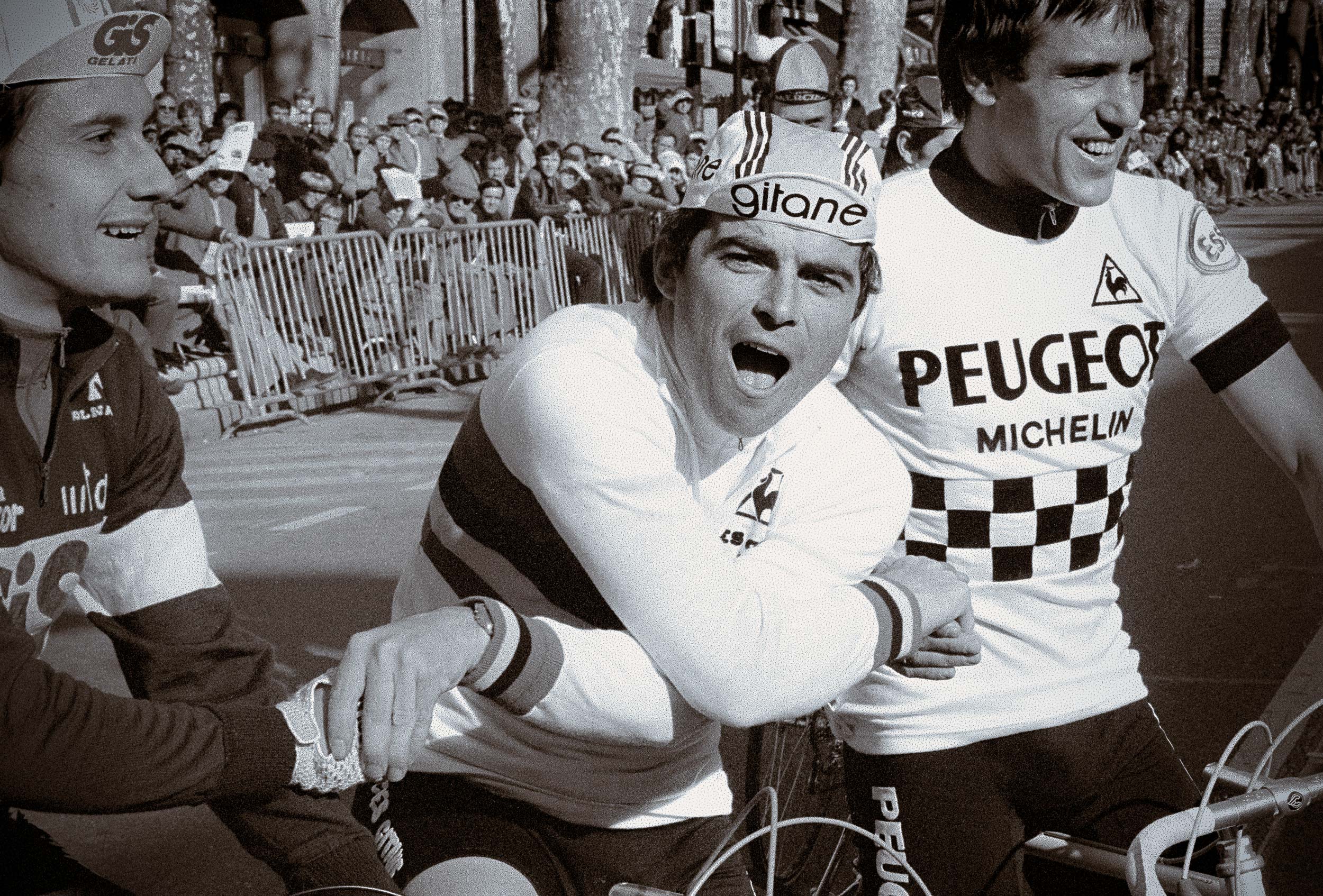 There are far fewer people waiting for the riders at Etoile de Besseges these days. Doping scandals have curbed enthusiasm of fans in France while several smaller races in remote country regions like the Midi Libre have vanished for lack of funds.

Bernard Hinault now drives a Tour de France car and joins dignitaries to applaud winners on the podium – and most of these come from countries he has never heard of. Thévenet has worked as a television commentaror and now trades off his former fame, parading around at races offering the New Fans a sense of nostalgia. Bernaudeau and Giuseppe Saronni have become team directors. They have Japanese, Ukrainians, Slovenians and Kazakhs in their ranks.

I doubt they are telling their riders about the good old days on the radio. They would not know the language.

Yet, when FDJ manager Marc Madiot pushed for ear-pieces to be banned, it was probably in memory of these times when cycling looked more human and accessible. Let us hope it becomes that way again. 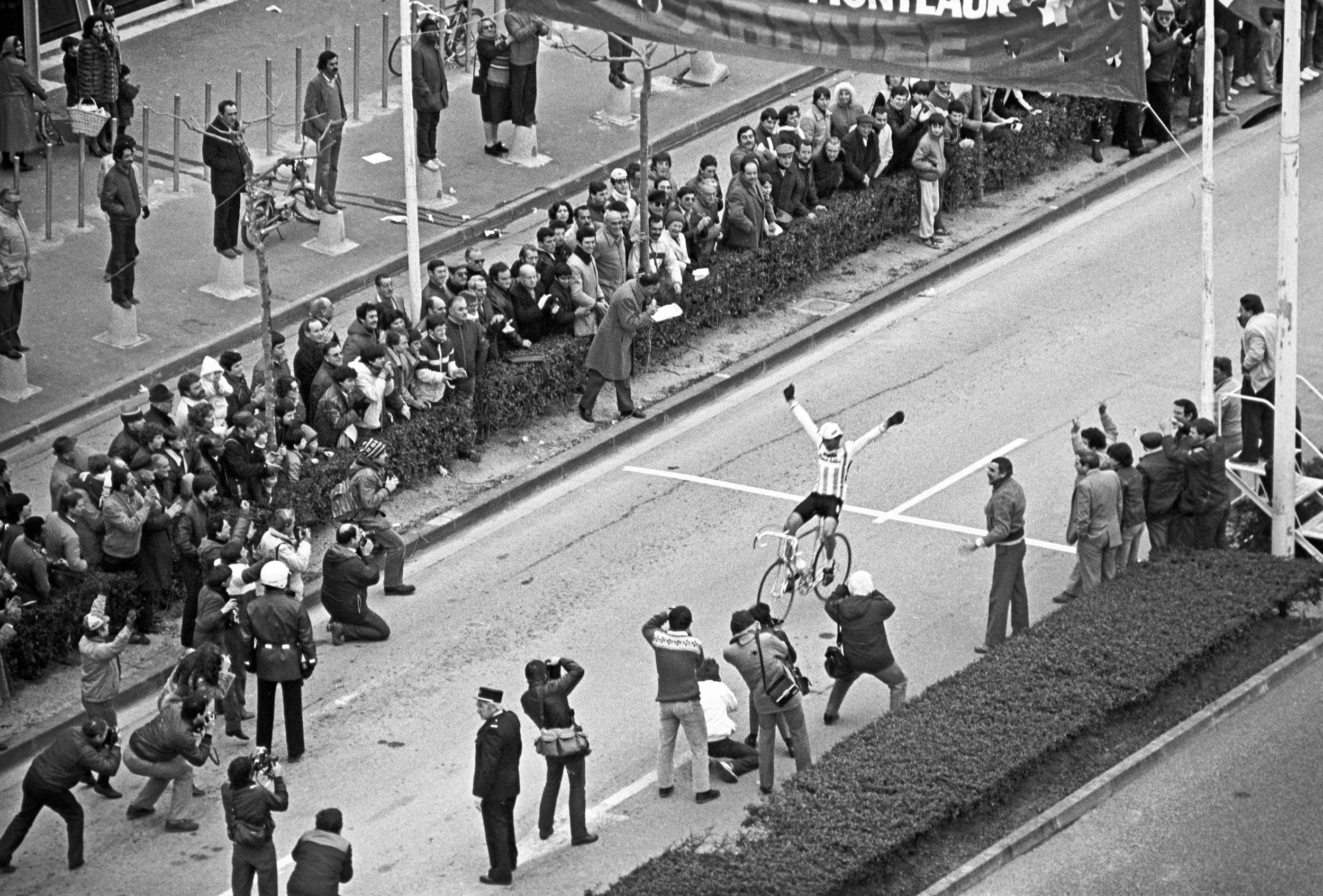 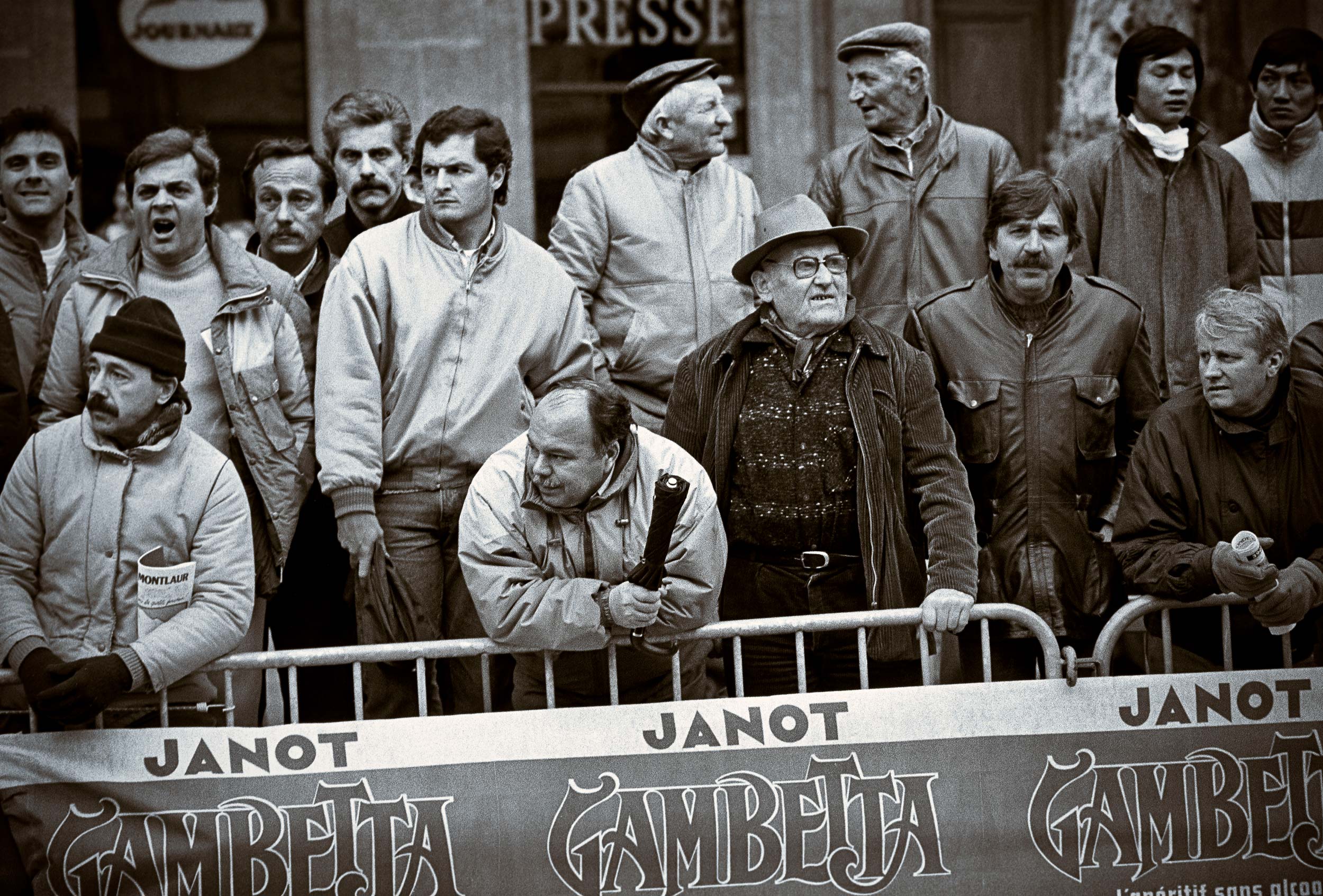 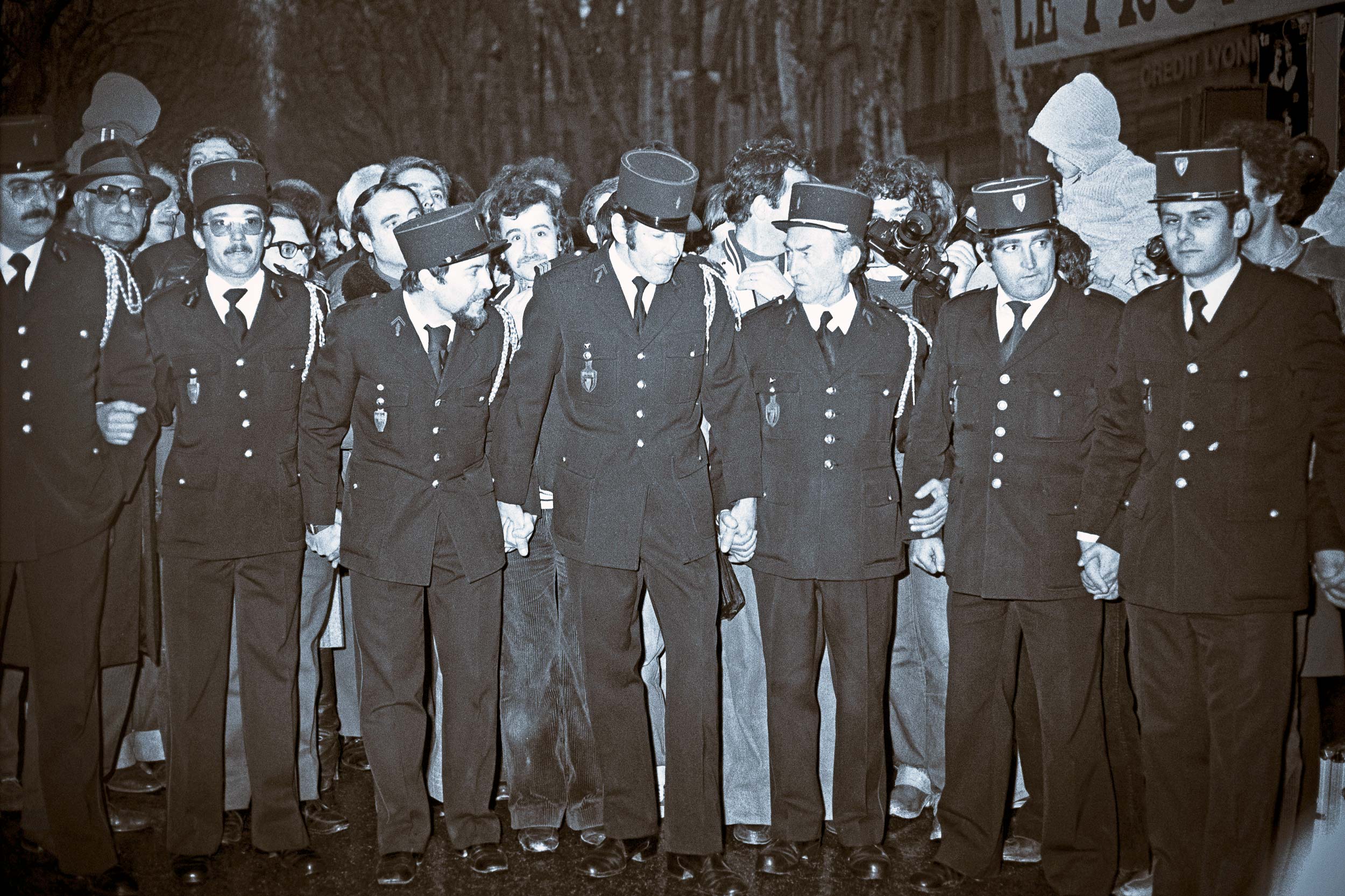 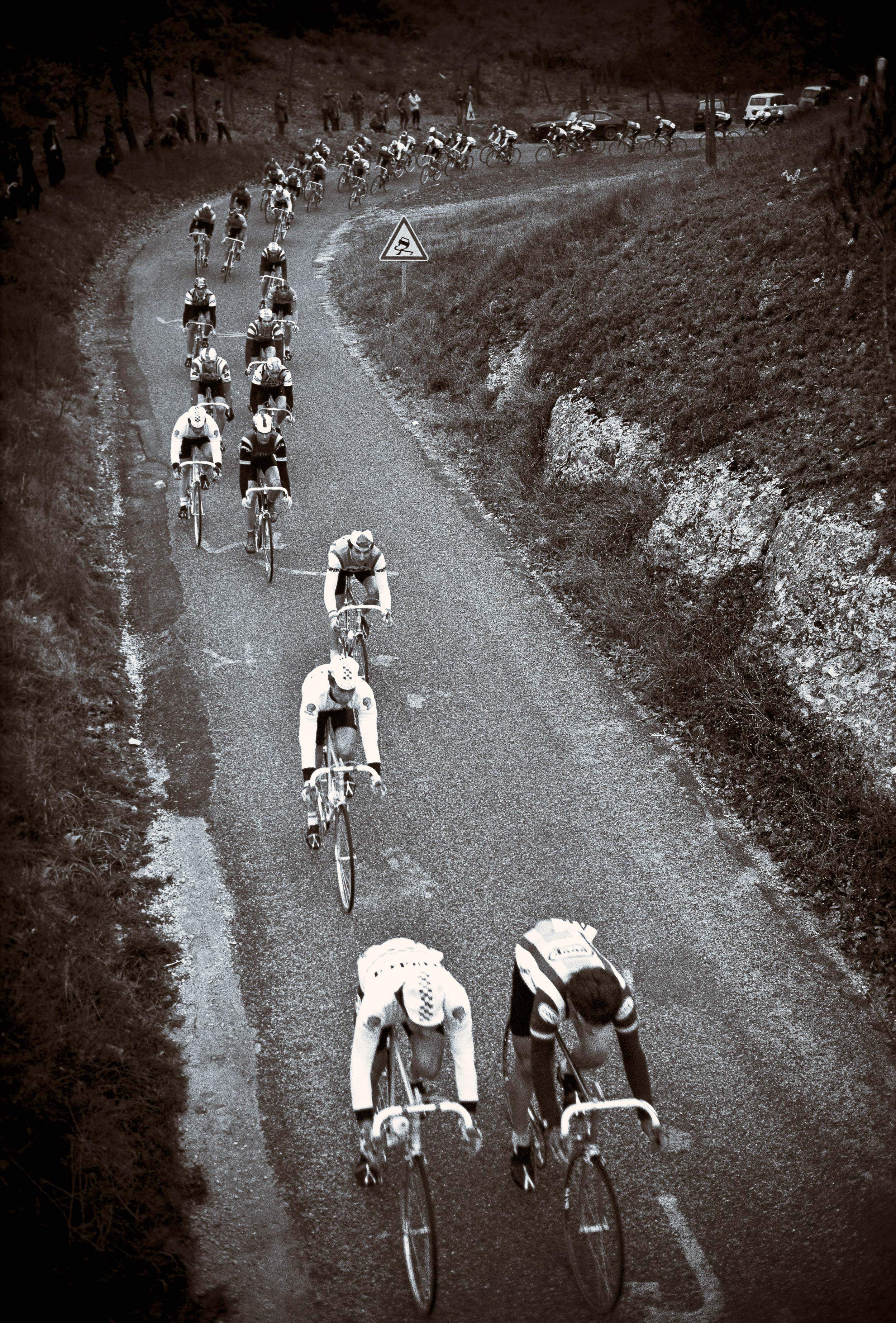