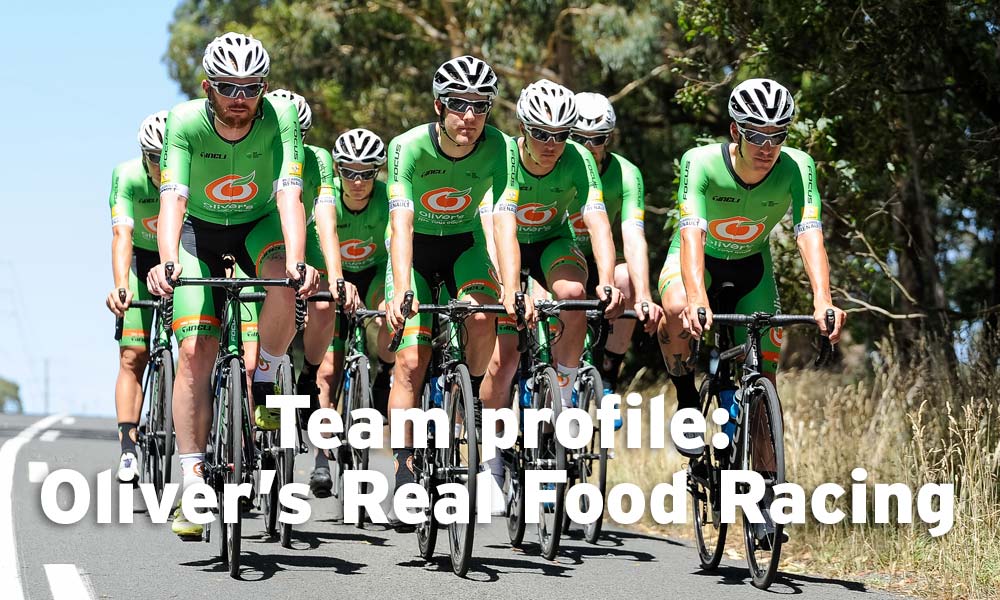 We continue telling the stories of teams that will be contesting the nine-race NRS in 2018. This is an overview of Oliver’s Real Food Racing, an outfit that has a committed sponsor and big ambitions…

Go for a road trip in Australia and consider your options when it comes to feeding yourself and the family. Just as is the case in other countries in the modern world, your options are fairly limited; one fast-food outlet or another is given a plot of land where they plonk a drive-thru and you can order your meal without even getting out of the car.

Do you want fries with that? No, some of us say, we just want a meal that sustains us. Surely that’s not too much to ask.

Even better news for the cycling community is that Oliver’s Real Foods is investing in our sport.

Look at the peloton of an NRS race and you’ll see ‘the green team’. Look a little closer and you see a logo that represents the chain of 26 stores that have popped up along our highways in recent years. Look even closer and you’ll realise that the menu is one that suits the cycling lifestyle…

This is a sponsor that has been listed on the ASX and it is committed to cycling, healthy lifestyles, and – thankfully, finally – offering an alternative for the road trip meal…

Sam Layzell, the manager of Oliver’s Real Foods Racing took a moment to answer RIDE Media’s 10 questions about his team and the NRS. Here’s an introduction to the line-up… 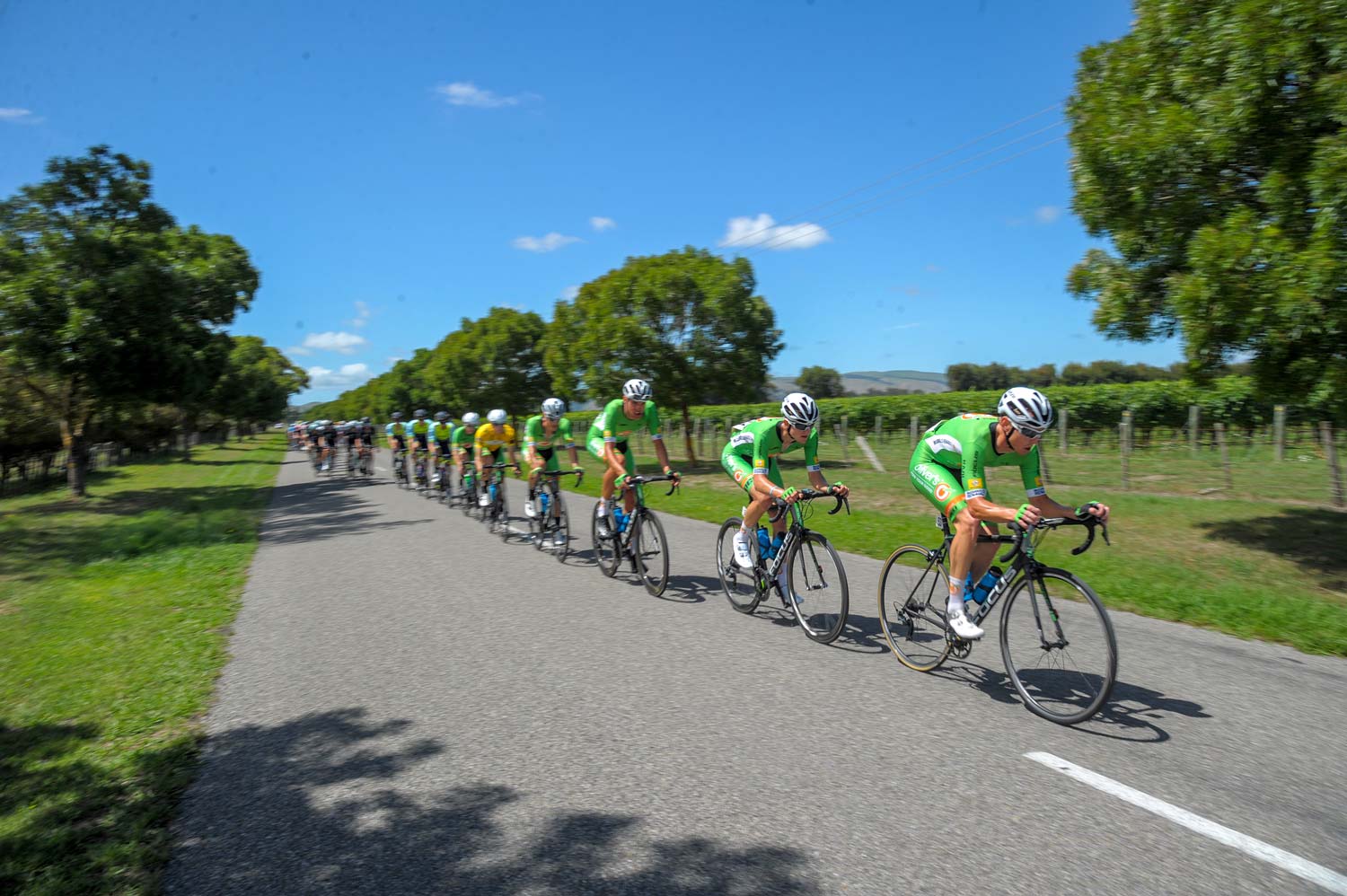 Find out more about Oliver’s Real Food, take a look at the menu, and drop a pin on one of the store locations that may be on the roadside of your next road trip… 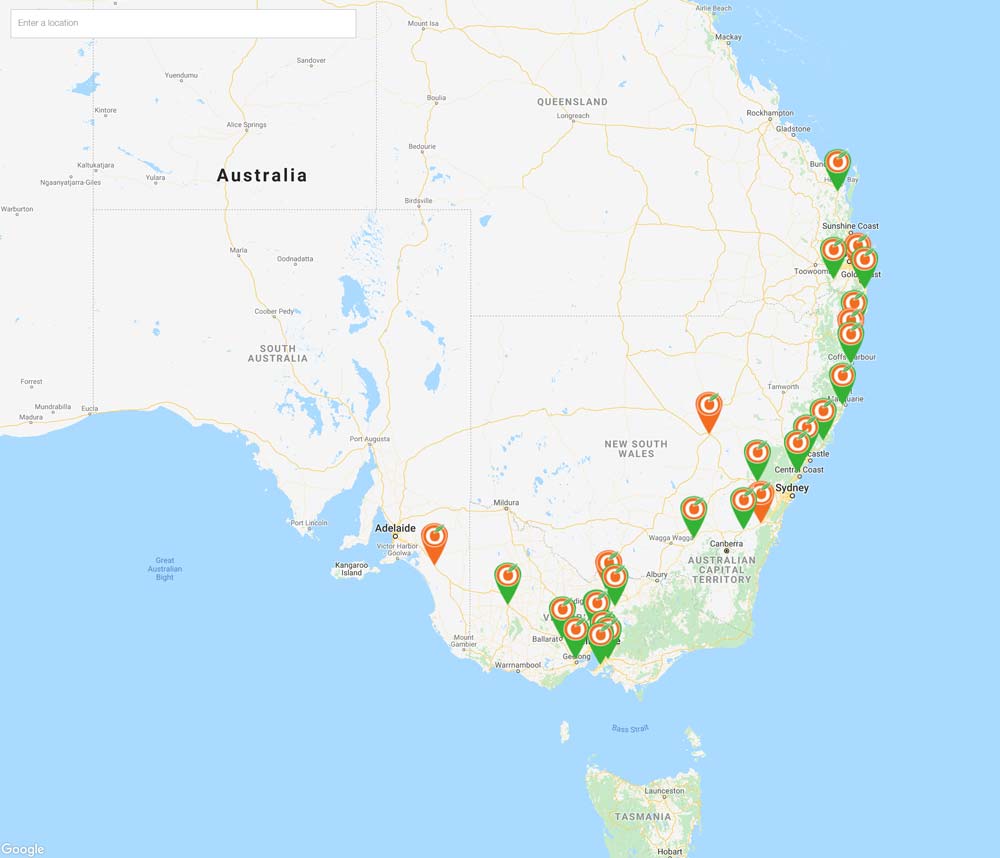 1. Can you please provide a list of riders on your team?

2. Can you please list the staff/management of your team?

3. Can you please list your title sponsors and what their line of business is?

Oliver’s has 25 stores at present along the Australian east coast. 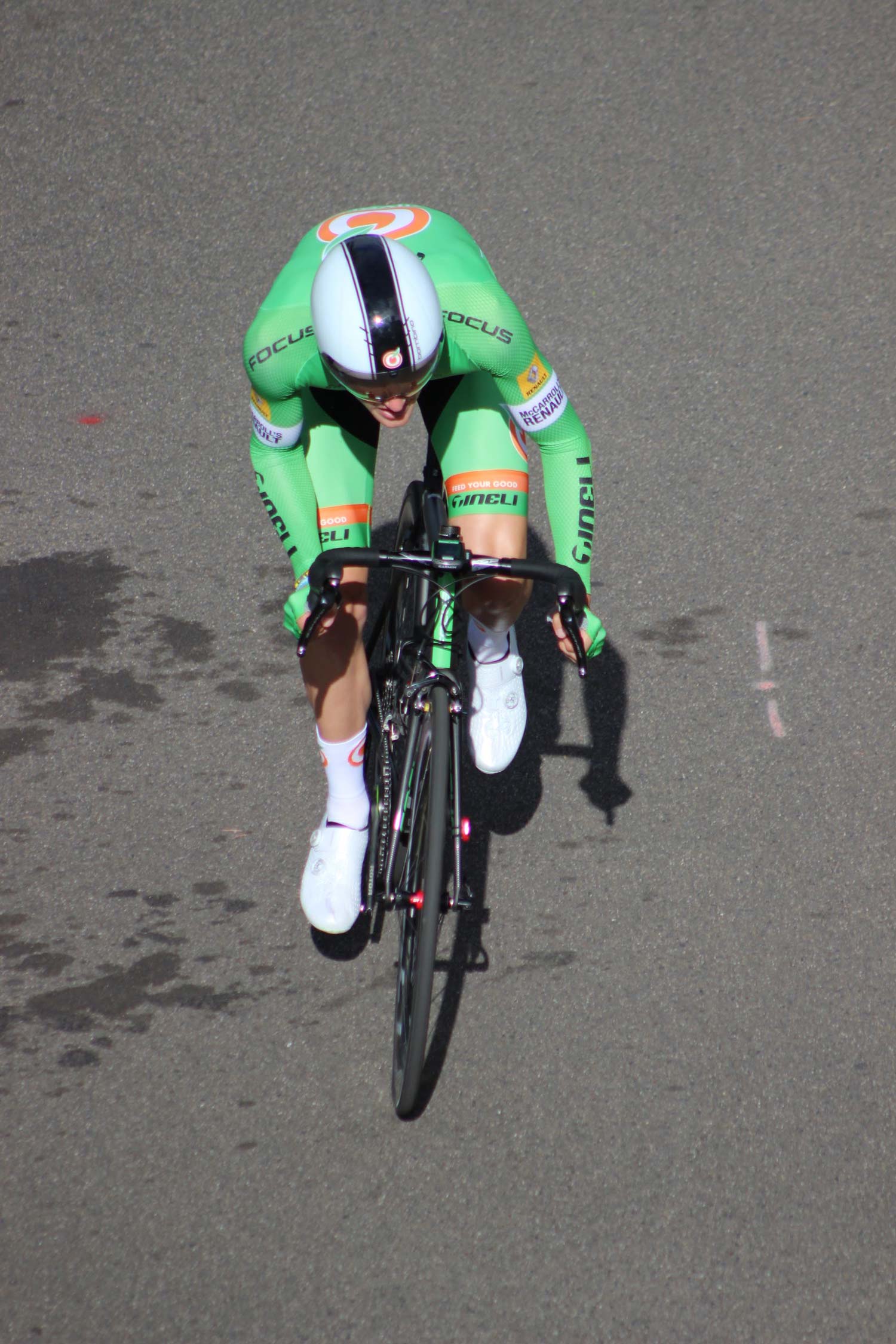 5. Do you expect that your team will contest all events on the NRS calendar in 2018?

“Looking forward to competing in the full season of events!”

6. Can you please list relevant social media links that are associated with your team?

When answering the questionnaire the team manager, Sam Layzell, also provided the social media handles for all riders on the roster… 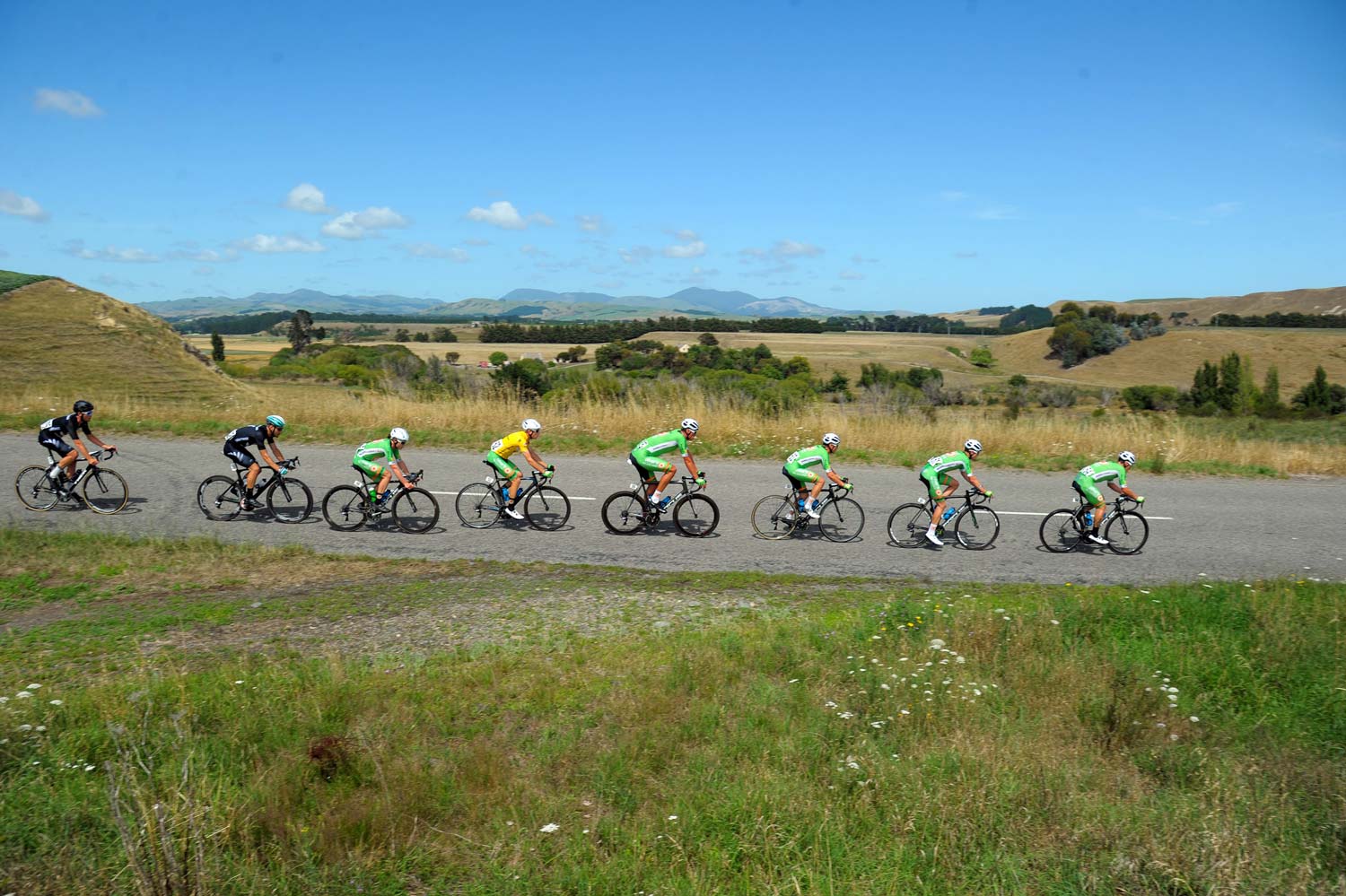 7. What is your team’s main motivation for being part of the NRS?

“Our team’s primary goal is to identify, develop, and provide opportunities for young cyclists to attain the highest possible levels of achievement in cycling. We therefore naturally place a large emphasis on involvement in the National Road Series, with its strong history as a breeding ground for the future stars of our sport.

“Our involvement in the NRS is also driven by our desire to provide exposure for our Australian based title sponsor, Oliver’s Real Food, by achieving success on the national stage.

“The staging of the NRS races in regional centres along the east coast, such as Ballarat, Goulburn, Geelong and the Tweed Valley strengthens this exposure with Oliver’s outlets located in these regions. We also visit many of the stores on the way to and from events. Finally, the media coverage proposed by Cycling Australia for the 2018 NRS season presents an excellent opportunity to further promote all of our sponsors and partners.” 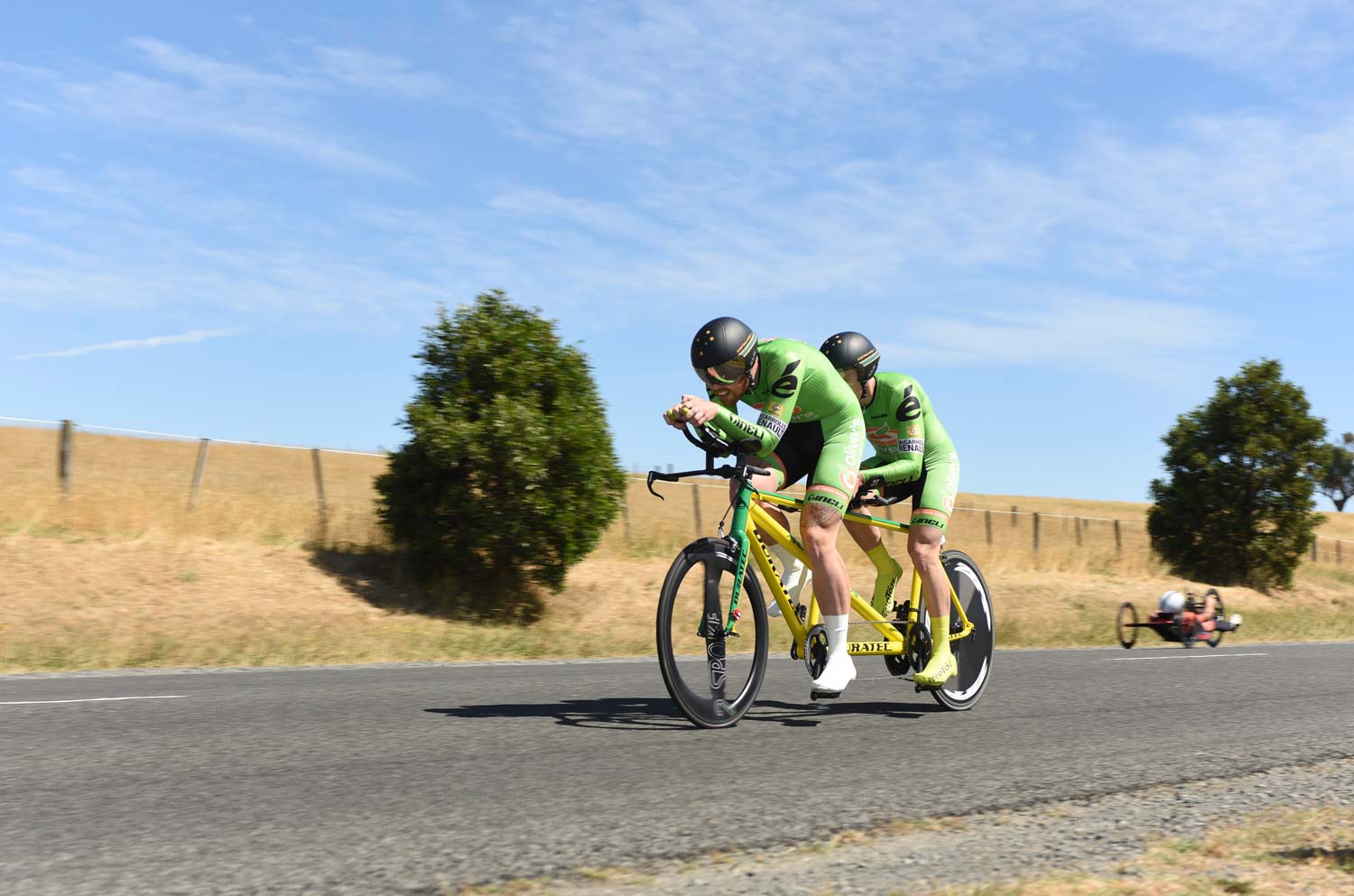 8. What could be done to improve the NRS?

“As we’ve heard from other managers in previous team features, there has been a lot of positive change in the NRS over the past 18 months which I’d like to comment on first. One thing I’m particularly excited about are the changes to the NRS calendar that are taking shape this season and will be complete in 2019.

“I am a big advocate for the transition to a calendar in which races are grouped throughout the year based on their type, and seeing that come to fruition this year is very exciting. This kind of structure is good for the racing scene in Australia because it mimics the professional structure and allows riders to learn to structure training specifically for events.

“Also, having a break in the NRS over the colder months in the middle of the year means teams can incorporate some overseas racing into their schedules. The break also gives riders the chance to have an off-season, which was difficult previously with racing held all year-round.

“Looking at the new calendar from a team management perspective, it is a good opportunity to plan out the following season early and negotiate with sponsors after (hopefully) finishing off a good summer campaign!

“Another positive change that was implemented in 2017 was the development of an NRS point scoring system that mirrors that of the UCI ranking system. This system rewards teams that work together, thus encouraging sportsmanship and the use of tactics – in other words, good racing.

“But, of course, as with everything there is still room for further improvement.

“I think all teams would agree with me that the NRS could be greatly improved if the series and even the individual races were planned with a goal of unifying the teams to improve logistics and save costs.

“Race organisers, in conjunction with team managers could organise designated race accommodation, meals, and transport (where applicable). This unification would not simplify logistics, but it could allow for group discounts and even promotion opportunities. An example would be to have a team presentation for the Tour of Tasmania at sea on the Spirit of Tasmania, as all the teams and team vehicles head over to the race. You’d likely get every passenger on the boat to attend!

“I also feel that there are certain improvements that need to be made to the NRS team registration process. Granted, a lot of positive change also already occurred in this area, however I question the feasibility of having up to 25 teams in the men’s series, particularly when some teams will attend just one or two rounds.

“I think the overpopulation of the NRS is due to the fact it costs only $1,000 to register a team. To put this into context, in NSW where our team is based, it would be more expensive to register as a NSW-based team than to register as an NRS squad.

“I raise this issue of overpopulation because I feel it reduces consistency across the racing season and, thus, the appeal of the series and the strength of the NRS image, more generally. To rectify this issue, I would like to see a regulation introduced that makes it compulsory for NRS teams to attend at least 75% of the events on the calendar, or risk not being eligible to be an NRS team the following season.

“I would personally also like to see the NRS registration fee increase. The additional funds can be used for additional media coverage, or given to event organisers as a deposit for race entry that can be credited back to the team when they enter the event. I know this idea may mean that we will lose some of the smaller teams, but I think that this would improve the strength of the NRS, as I mentioned above.

“These smaller teams can go back to being registered in their respective states, and would still be eligible under the current NRS regulations to enter NRS rounds as a ‘wildcard team’.

“By reverting to state-based teams, which is where Oliver’s started, smaller teams can save money, and not overpromise and underdeliver in terms of racing for their riders. There may also be an increase in numbers at state open racing and thus strengthen this level of our state based racing.”

9. How many years have you and your team been involved in: 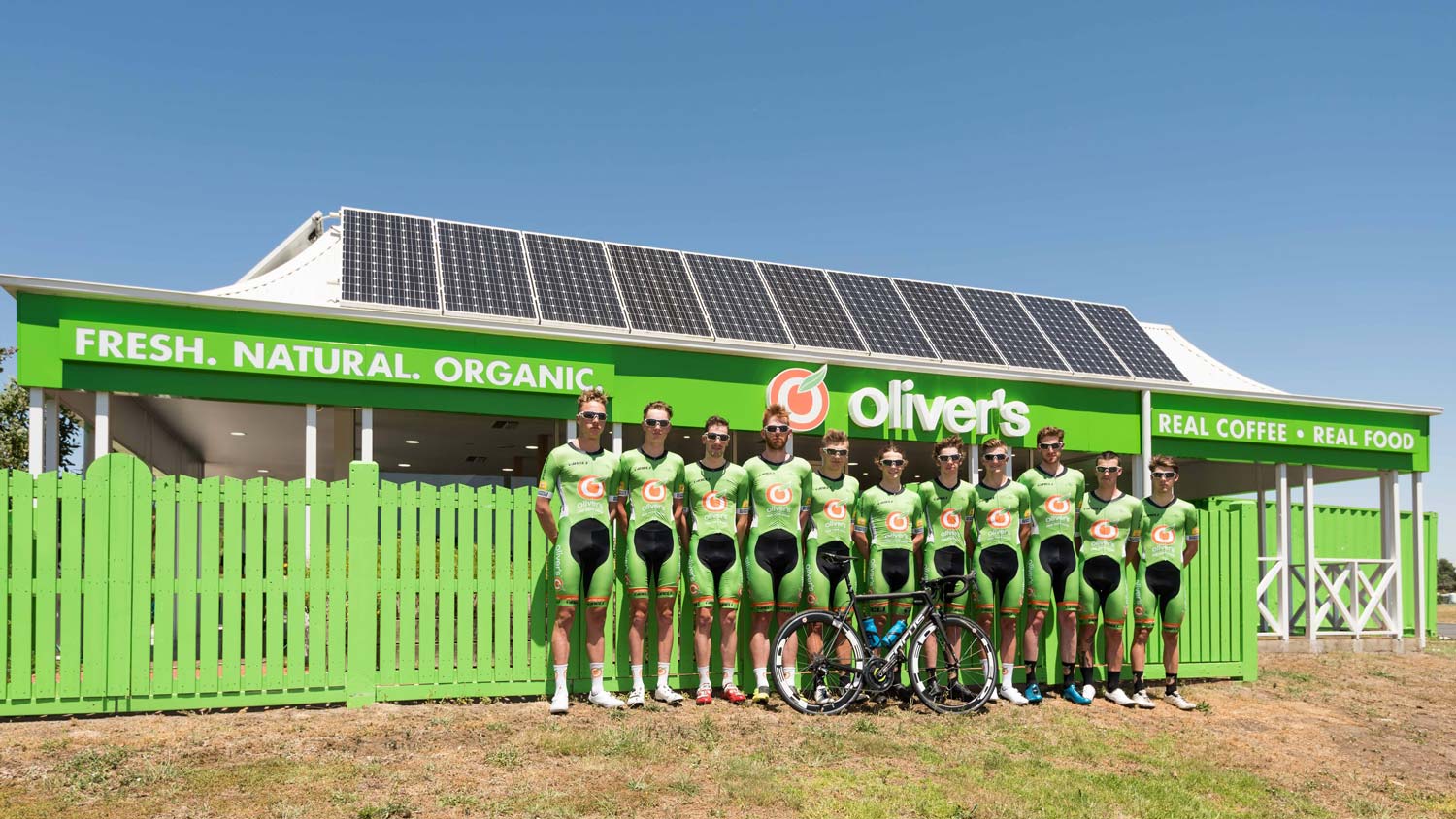 “Born from humble beginnings in 2010 as a Newcastle (NSW) based bike shop team, the team entered the NRS for the first time in 2013. Known back then as the ‘Paradice Investment Cycling Team’, it slowly grew and developed into a truly nationally based team, with riders from Newcastle, the Hunter Valley, Canberra, Melbourne, and South Australia (the latter thanks to the team’s strong ties with Focus Bikes whom are based in Adelaide).

“The transformation of the team to Oliver’s Real Food Racing in 2015 was the direct result of the growth of the Oliver’s brand in Australia. After two years in a minor sponsor role the company felt it was able to offer a higher level of support to the team. Since that time the healthy fast food chain has continued to grow steadily, adding locations up and down Australia’s east coast.

“In 2017 it was announced Oliver’s Real Food Limited would list on the Australian Stock Exchange.

“Now with 25 stores, the company has sought to change the fast food landscape in Australia.

“With the sport of cycling providing the perfect fit for advertising of the brand, it was announced in October that Oliver’s Real Food Racing would be registered as a UCI Continental team in 2018.

“The team has enjoyed many successes in it’s history, including stage ant tour wins at NRS and UCI level. For season 2018, the team will aim to finish in the top three of the NRS standings.

“Oliver’s Real Food Racing also has a long-term goal to become an environmentally sustainable entity with a strong emphasis on minimizing the team’s carbon footprint, aiming to become the world’s first carbon neutral sporting organisation in the next five years. We also strive to reduce our impact on the environment, more generally.

“Oliver’s Real Food also has a strong commitment to promoting and supporting environmentally sustainable business practices, meaning our team and its title sponsor have parallel values.”