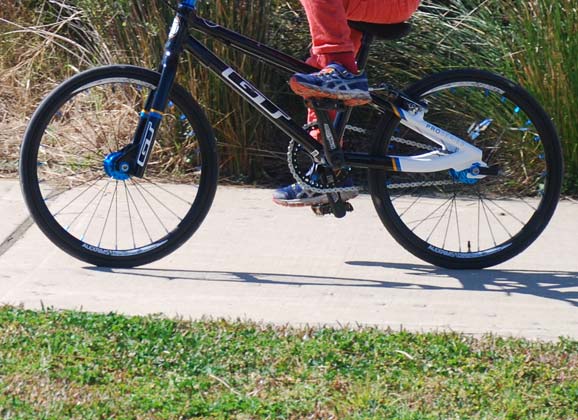 Nurturing the next generation: getting kids to ride

There are highlights in life and the day when your kid first rides a bike is one of them. RIDE‘s publisher has had the joy of two such moments, one for each of his kids. And, with the lessons learned and a recent triumph fresh in his memory we offer a few tips for parents who would like to share the joy of the bike with their little ones…* 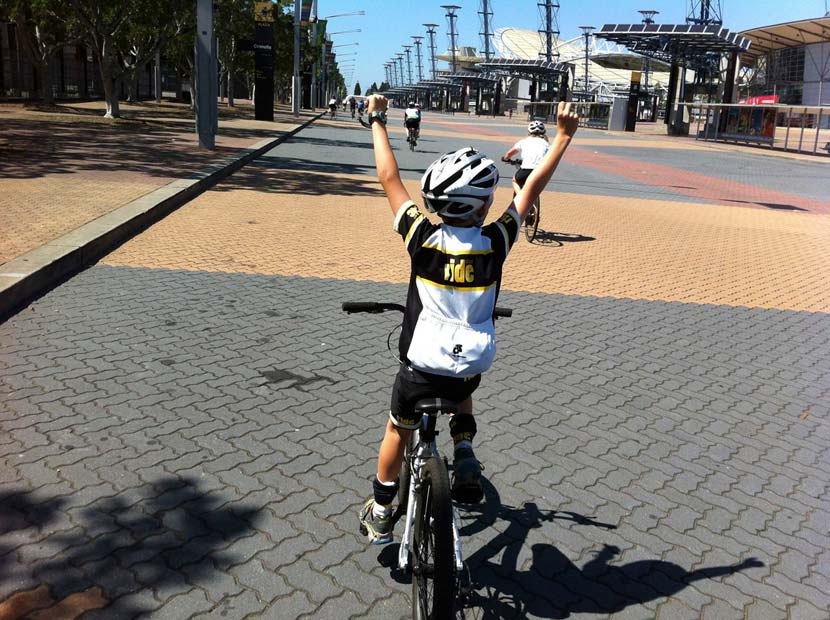 We ride. That’s a given. It’s why we are reading this. Cycling brings us together and we rejoice at the opportunity to spend some time on the bike with a few mates. It brings a smile to our faces, oxygen to our minds, a sting to the legs, extra beats from the heart, and much more. The physical and mental benefits become immediately obvious in the afterglow of a ride. But there’s always more to it, something else to talk about – something beyond the latest adventure, or the most recent viewing of a competition.

Cycling has long been a dominant force in my life. It has given me pleasure for many years and it continues to inspire me. Even at times when I think I’ve come close to saturation point something occurs to remind me of the joy that the bike offers.

Sunday 10 August. A momentous day in our family. The realisation of a promise. He said he would, and he duly did.

My four-year-old threw his leg over the top tube of his 18-inch micro-BMX GT. His “bike without training wheels”. He rode. And there was much rejoicing.

Cramp is a sensation cyclists are familiar with. It affects us often, if we have the luxury of time. Given the chance we’ll ride until it strikes. We’ll then lament the pain and perhaps wonder how it possible to twist a leg enough to unclip a cleat when the very act of moving a calf muscle results in a cry of agony. But in the instance of Mr Four’s first day of pedalling, cramp struck my face. The smile remains on my face five days later and anyone who dare ask the inevitable salutation – ‘How are you?’ – is subjected to a volley of commentary about a father’s Day of Pride. 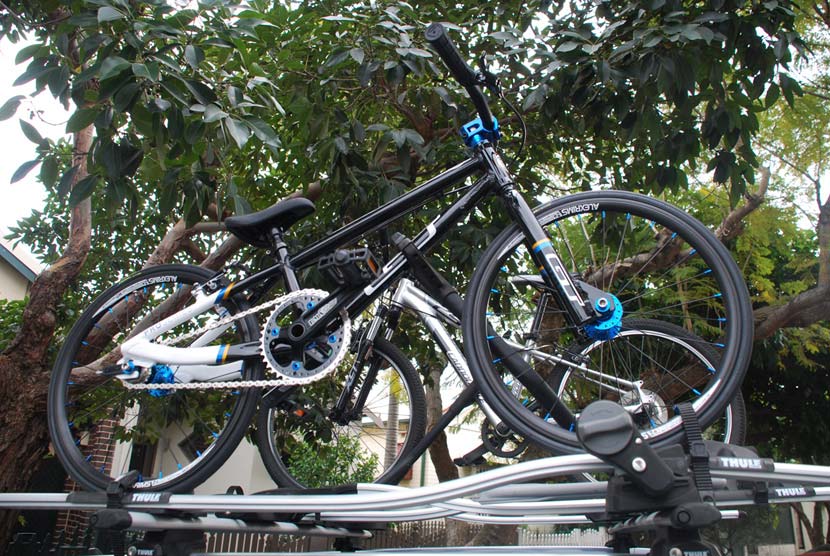 He was adamant: “No training wheels!”

He knew he could. He would ride. A four-year-old is stubborn. It’s the age that they find their voice, their confidence, their bravado… their bike and the joy that comes with the act of cycling. His first day alone on a pedal bike would come but it would unfold on his terms.

Here is a brief explanation of how it all came about so that, on the very day Mr Four nominated he would ride, he did so with apparent ease.

The first point: show your child the respect you show yourself when it comes to equipment. You don’t buy your bike at a supermarket, so don’t do that for the little one either. We all know a good bike results in hours of pedalling pleasure and a bad bike makes us wish we were doing something else. The same applies to other items… and, for the very young, that’s essentially appropriate attire and a helmet that fits properly.

The improvements in cycling technology are immense. What my kids can ride and wear is a stark contrast to the rudimentary equipment that helped me find my true love… and don’t believe that because you did it the old-fashioned way, they should. No, don’t skimp. Spoil them! They deserve it… and so do you.

The first true cycling purchase for your child should be a helmet. My boys know that they don’t go near anything with two wheels without head protection. They marvel at the stupidity of hipsters who ride the mean streets of Sydney thinking that it’s cooler to have immaculately combed hair rather than wear something that could save their lives.

To Mr Four it’s a habit. He’s worn a helmet since he was 10 months old. He’s now four years and two months old, and only once was it necessary to have had head protection. Thank goodness he did at that moment. I love that little fella! I’d be devastated if a momentary lapse turned into a nightmare.

Next step, for the parent, is to buy a WeeRide (or equivalent). For the many thousands of dollars I’ve spent on cycling equipment, my finest purchase ever is a seat for my kids that fastens to the front of my bike. It has helped them to understand the joy of cycling and it has brought us together. My first conversations with my two kids happened as they sat in front of me on a weekend morning while we explored our city.

I can’t talk about “behind”. Seats that sit at the back of the bike don’t appeal to me. There’s no engagement, the kid gets a face full of backpack and can’t see where they are going, and they often fall asleep. Up front, they get the wind in their face and have an understanding of what goes on: braking, shifting, steering… they call ‘red’, or insist: ‘Go on green!’ They point, shout, smile… and everyone you pass on this family adventure responds with a grin and a wave.

The child feels good. The adult is proud. And there’s even more respect from motorists.

Mr Four started on the WeeRide at 10 months. He’s still there but now that he can pedal, that time is limited. Still, I’m milking it for all it’s worth: I adore the time on the bike with my kids. 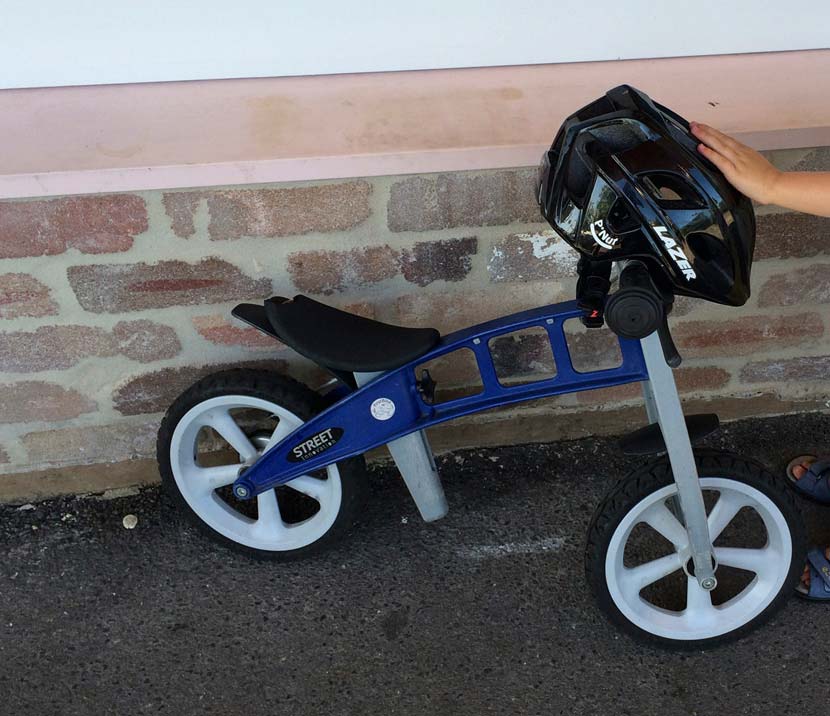 Next purchase: a proper balance bike. Sure, get them a scooter, but that’s just transport. The balance bike serves as much more. It’s an education. It teaches steering, braking and, as the name suggests, balance. Don’t skimp. Get one that is designed for the kids, not for cheap-arse department stores. The good ones are created so that the handlebars cannot oversteer, so that your kid learns to like the bike, so that your kids don’t crash and hate the act… the good ones are My First Bike (or equivalent).

There’ll be other things to buy along the way, but the big one is their first pedal bike. Consider it like you would your next bike. Take into account their size – not just their age! My first child started on a 20-inch micro-BMX. His younger, smaller brother got an 18-inch micro-BMX. The first weighed 6.2kg; the second is 5.6kg. Mr Four already believes he’s ahead of his brother: “Mine is lighter than yours was!” Etc. 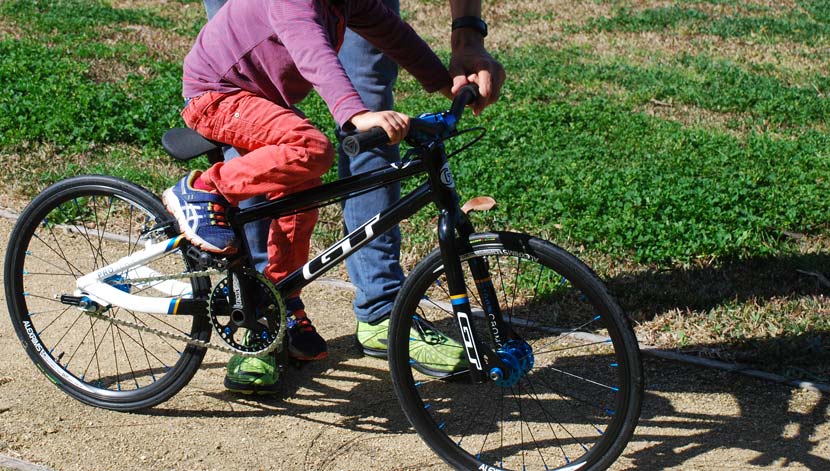 I learned a lot from my experiences with Mr Four’s older brother. And Mr Four learned a lot from watching someone with an advantage of five extra years reach a level of cycling competency that would make many an adult feel ashamed.

There have been crashes; a few nasty ones and plenty of minor ones. But, touch wood, no bones have yet been broken and all the skin has healed. (One scar remains after a pedal to the face on an early BMX track adventure, but Mr Nine doesn’t mind this as much as his mother does. And he now has a full-face helmet for such occasions – ie. when he’s trying to beat his dad around the final berm…)

We have ridden together all their lives. Mr Nine grew up on the WeeRide. He graduated to his GT BMX, then to a Forty ‘city bike’ (with three-speed internal gears), then a 24-inch Cannondale MTB (with seven-speed gears and a derailleur), then to a 24-inch Pinarello (with STI shifting, an eight-speed cluster and two chainrings). He’s spoiled, but I own a cycling magazine… if I didn’t indulge my kids when I got the chance, surely I wouldn’t be doing my job as a parent.

Mr Four still has his balance bike. But his new love is his 18-inch GT BMX.

The day of his first ride arrived last Sunday. He got the bike in June, a week before I left for the Tour de France and he told me, “Dad, I’ll wait until you get back.”

“But the first weekend you’re home, you’ll be tired. We’ll just go on the WeeRide ride to the coffee shop.”

“The next Sunday, I’ll ride my pedal bike.”

He did as he said he would. He directed me to a location he knew would suit. It had a bit of grass for him to start. A gravel path. And a bike lane nearby.

He stepped on. He found the pedals. He freewheeled two crank rotations. He asked me to raise his saddle, “just one centimetre”. And then he gripped the bars, pushed my arms away… and off he went.

There was a tear in my eye. Pure joy! Pure pride. A great ride. 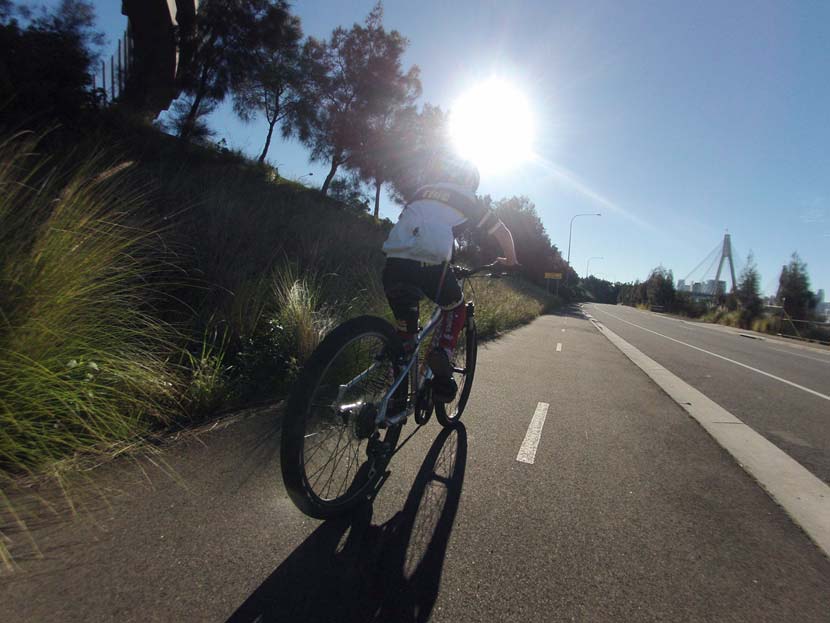 Note: The children do actually have names but we reference them by age for the purpose of this piece.