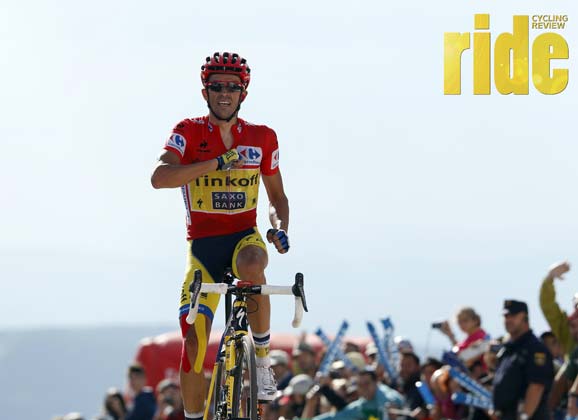 RIDE #65 is the third edition of Australia’s premier cycling magazine for the year and it includes coverage of all three Grand Tours of 2014: Giro d’Italia, Tour de France and Vuelta a España – and that’s why you can see Alberto Contador and Vincenzo Nibali on the cover. These are two stars of what has been a most intriguing season of racing. 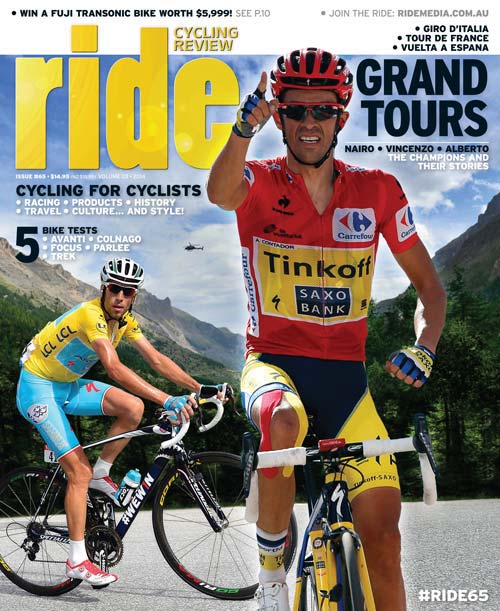 Since the magazine’s inception in 1998, RIDE has never attempted to offer race reports. In the modern world, we get our ‘news’ so quickly and efficiently that it would be futile to attempt to report on a competition months after the event. Instead what we hope to do is offer an overview of the action, provide some insight with reactions from those involved, and publish the best possible photographs.

And while this issue (Volume 03, 2014) is a little late, it has lashings of content and offers an overview of contests that exposed the talents of three champions. Nairo, Vincenzo and Alberto were the winners and there were many others who entertained us these past few months.

Starting in reverse order we consider the stories that unfolded on the roads of Europe: the exploits of Contador – who won La Vuelta only two months after fracturing a femur at Le Tour; the domination of Nibali who led the GC at the Tour for all but two stages this July; and remember the impact of Quintana, Colombia’s first Giro champion. 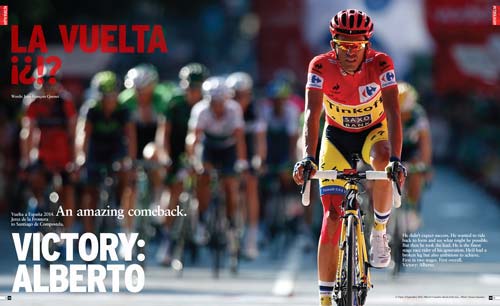 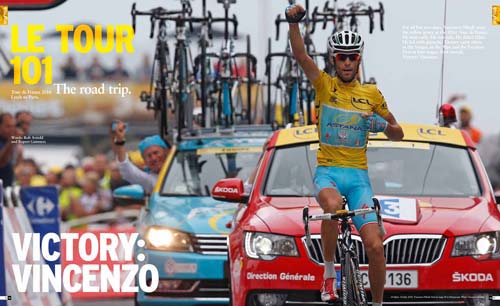 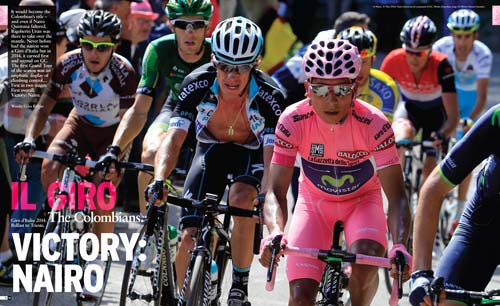 The good, the bad, the ugly – and the beautiful

The evolution of RIDE continues and the past few months have offered us a chance to see how readers respond to online coverage of events like the Tour de France. Through a variety of mediums – www.ridemedia.com.au, our Facebook page, and our Twitter and Instagram accounts – we have shared stories as they emerge, while being careful to keep a few surprises for when the printed edition is released. That time is now…

And inside you’ll find a range of stories that have been commissioned in the hope that they’ll entertain and educate.

James Stout offers a great overview of cycling style: the good, the bad, the ugly, and the beautiful. He argues that there are no rules to the cycling aesthetic, rather some fundamental truths that you absorb by being involved. “Shave your legs please,” Stout quips. “Not for massage, not for road rash repair, not for aerodynamics, but because when you’re sweating and crushing souls on your next group ride, you can look down at those smooth calves and feel like a marbled Adonis in motion.” 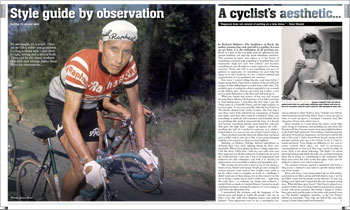 A veritable feast of seductive bikes and pieces

As you’ve come to expect, there’s also oodles of cycling product on display on the pages of RIDE. Our ‘Retro Review’ is not a race machine, rather a classic touring bike from 1950 complete with Sturmey Archer gears, mudguards and lights. It’s a handcrafted beauty named after a racehorse and kept in immaculate condition.

We feature a show report from Eurobike to show us how many shades of The New Black we can expect to see in 2015.

Our ‘Paraphernalia’ pages include a range of new releases – including power meters from Pioneer and Power2Max and Shimano’s latest iteration of its 105 ensemble. There’s innovation, fashion and lubrication. You’ll find items as varied as cameras, cranks or watches… and considered, honest reviews of everything on display.

And then, of course, it’s onward to the five bike tests: Colnago C60, Focus Izalco Max, Avanti Corsa SL, Parlee ESX and Trek Silque… it’s an interesting mix that includes a renowned race brand, the lightest frame we’ve ever reviewed and a women’s model in a cool scheme with interesting innovation. (Click the links of each to visit the online gallery, which boasts a collection of over 100 photos.)

And there are rides around wineries…

For our 50th instalment of our popular ‘Caffeine Culture’ series about riding locations around the world, we delve into viticulture and ask wine makers from around Australia to explain their love of cycling, their favourite ride locations, and the things that help them combine their work with their other passion. We visit various places in Australia where vin and vélo combine.

In this edition of RIDE Cycling Review there are 228 pages, hundreds of photos, thousands of words, and all of it combines to tell the story of cycling… for cyclists.

Work has already begun on preparing the final edition of RIDE Cycling Review for 2014. There are a few surprises planned but we’ll continue doing what we’ve done for 17 years: publishing stories about cycling – the bikes, the personalities, the competition… and the vibe. Join us for the ride.