With the Spring Classics finished for 2022, we are now closing in on Grand Tour season. And, for the 20th consecutive year, RIDE Media will be publishing the Official Tour de France Guide (Australian edition).

The ‘Tour Guide’ by RIDE Media: order before 1 June 2022 for free delivery.

Early in 2003, with preparations for the 100th anniversary of the Tour de France in full swing, RIDE Media was approached by ASO, the company responsible for organising the world’s biggest bike race. The topic was publishing, and the idea was to produce an Australian edition of the Official Tour de France Guide.

It seemed like a good proposition and an accord was struck: to celebrate the édition du Centenaire of Le Tour, we would create a souvenir magazine for the Australian market. 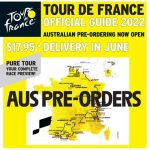 With that conversation the ‘Tour Guide’ was born. And it has been an annual tradition ever since. This year marks the 20th season RIDE Media will publish the Official Tour de France Guide, a comprehensive preview of the race with insights about the riders, their teams, and the route that changes year on year.

The 109th Tour de France will begin on a Friday in Copenhagen, Denmark on 1 July 2022. There will be a time trial followed by two road stages in the most northerly location the Tour has ever been. 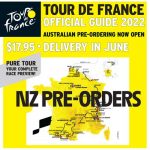 After that opening weekend there’ll be a ‘transfer day’ as riders and all others in the race entourage make their way to France for the beginning of the next stanza of what promises to be a compelling contest this July.

Again, there will be 21 stages – some in familiar locations, others with new destinations and associated challenges. There will be 22 teams of eight riders to create a peloton of 176 riders. And there will be stories that emerge that will form part of the Tour’s rich history.

On the final Sunday the winner will be presented to the crowd on a stage in the centre of the Champs-Élysées and he will receive a yellow jersey for his efforts.

The ‘maillot jaune’ is a symbol of success in sport, it is a coveted prize that all pro cyclists dream of wearing. Winning the yellow jersey is a noble concept, a challenge that many pursue but one that only few elite riders have been able to master. 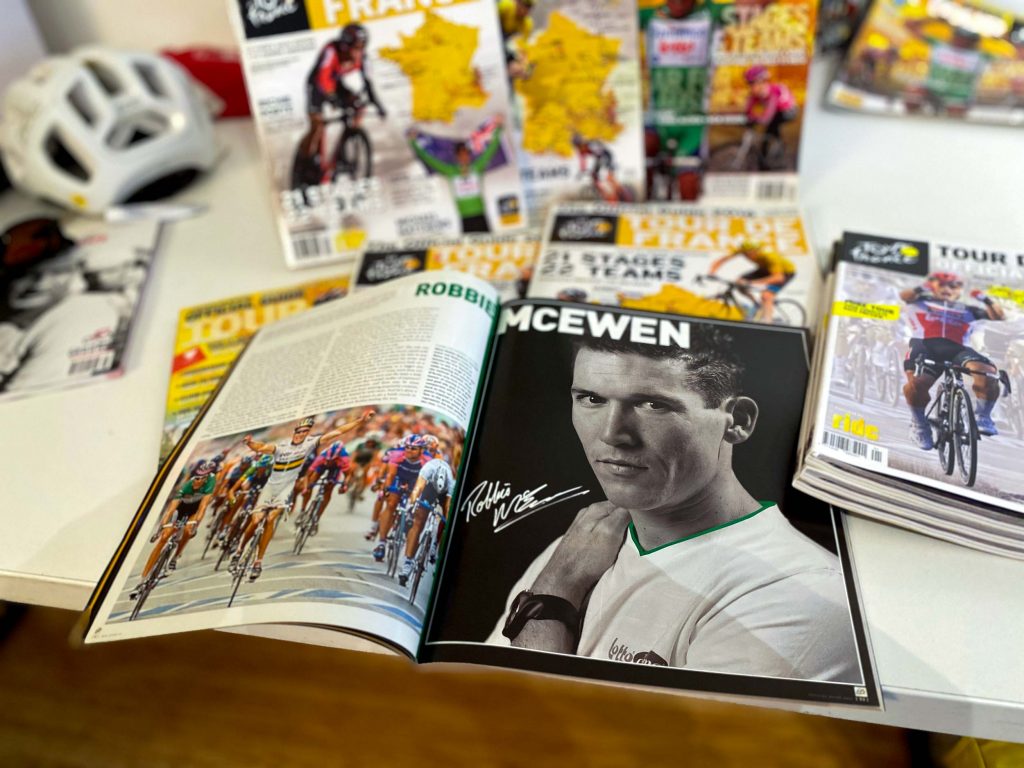 Over the time that the Tour Guide has appeared in newsagents in Australia, cycling has evolved enormously in this country. The race that was once only shown on TV months after the champion was decided eventually received daily highlights packages, broadcast by SBS TV in the early years of what is another ongoing agreement with ASO.

Eventually the 30-minute highlights program also evolved and, over the past decade, live coverage of an event on the other side of the world has been shown on Australian television. It is a ratings winner for SBS, and the network continues to showcase cycling to an audience of enthusiasts who have come to know and love this sport because of the action they see on the roads of France (and surrounding countries). 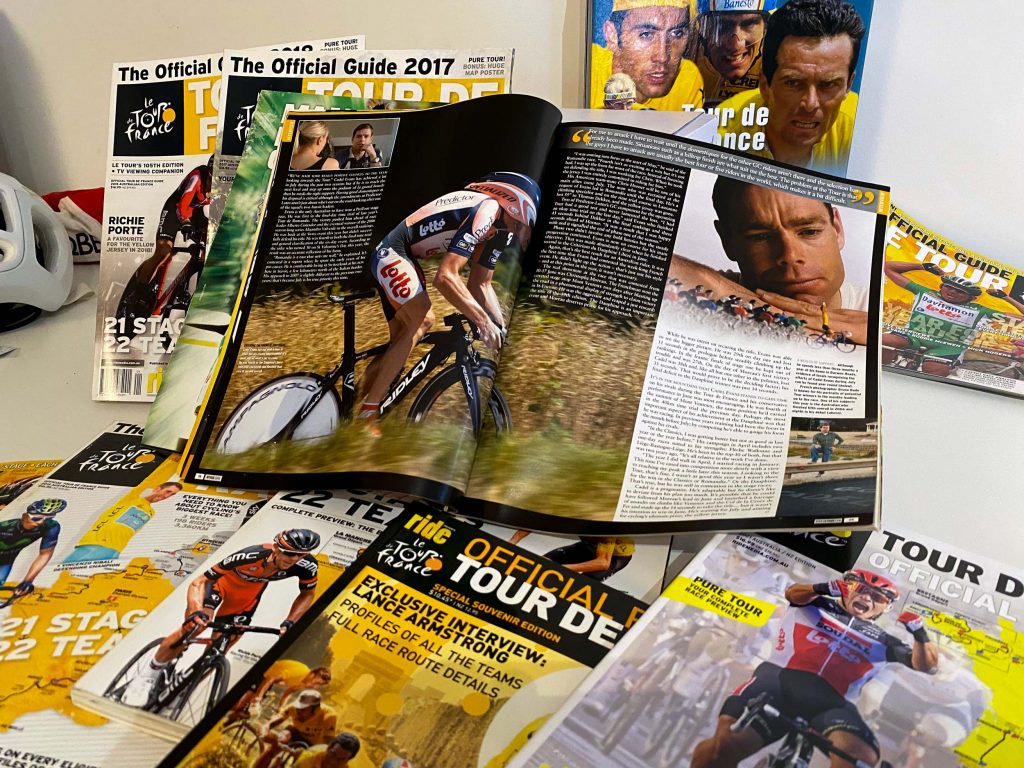 We have seen an Australian win the yellow jersey, with Cadel Evans confirming his talents in 2011. It was a victory that elevated the status of cycling in his home country, something that has inspired many others to get a taste of the cycling life.

The Aussie presence increased a notch in 2012 when the first Australian-registered team appeared at the Grand Départ. The GreenEdge experiment continues in 2022, under the banner of Team Bike Exchange-Jayco, and other Australian riders are vying for victory in Le Tour.

There is now a long list of Australian stage winners and yellow jersey wearers. There has been a trio of Aussie green jersey winners, first Robbie McEwen (2002) then Baden Cooke (2003)… McEwen again (2004 and 2006) and Michael Matthews (2017).

We have watched as Richie Porte rode in support of multiple champions before putting himself on the podium in Paris with a third place on GC. And twice Gerry Ryan’s team has claimed the white jersey for the best young rider in the race – albeit with the British brothers, Simon Yates (2016) then Adam Yates (2017).

Some of ‘our’ riders have become directeurs sportif and helped to guide others to the top step of that Parisian podium, with Scott Sunderland calling the shots from the team car for Carlos Sastre in 2008 and, more recently, Allan Peiper the mastermind behind the first of Tadej Pogacar’s stunning TDF victories.

And in 2022, there are other Australian riders who continue to push the limits and test themselves against the best cyclists in the world.

Our most recent stage winner, Ben O’Connor, was fourth on GC in 2021. While Jack Haig, who unfortunately crashed out of last year’s Tour early in the race, backed up to finish the 2021 Vuelta a España in third place.

Ben and Jack are expected to be at the Grand Départ in Denmark, along with a host of other Australians who will be part of the 109th Tour de France. 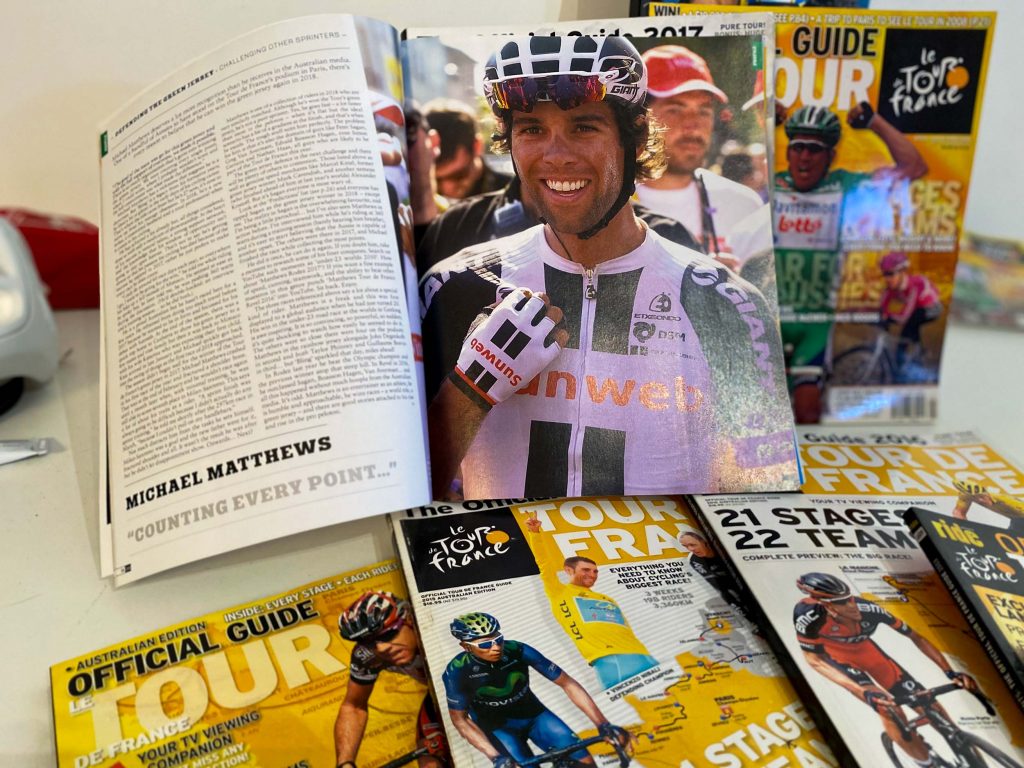 We wait to see what unfolds as the peloton makes its way from Copenhagen to Paris in July 2022. And it’s with great excitement that we recognise another enormous change in cycling that will take place at the end of the race. When the men are finished, the women’s peloton speeds into action, with the inaugural Tour de France Femmes avec Zwift.

The eight-stage race begins in Paris on 24 July 2022 and concludes atop La Super Planches des Belles Filles on the last day of the month.

Be sure to get your copy of the Official Tour de France Guide (2022 Australian edition), by RIDE Media. It’s the ideal TV viewing companion and, again, a souvenir magazine that previews the biggest bike race of all.

Pre-order your copy of the Official Tour de France Guide before 1 June 2022 for free delivery.