The Official Tour de France Guide (2022 Australian edition) will be in newsagents in Australia from Thursday 16 June. This 212-page magazine is your complete preview to both the 109th TDF and the inaugural Tour de France Femmes avec Zwift. 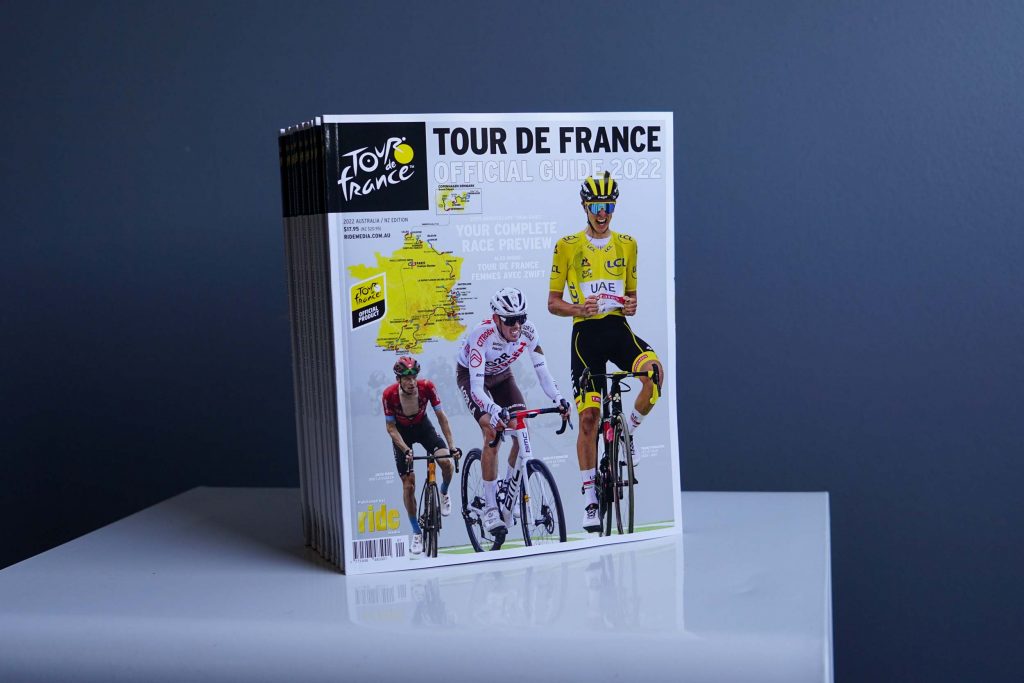 Pre-ordered copies of the Official Tour de France Guide (2022 Australian edition) will be arriving in mailboxes in the coming days*. This huge magazine, complete with a giant pull-out poster featuring the route for the 109th Tour de France, is RIDE Media’s annual preview of the Tour de France, produced in collaboration with ASO and L’Equipe.

This year’s ‘Tour Guide’ is the 20th anniversary edition, and it previews the two big races that will be broadcast live throughout July.

The men’s race begins on a Friday 1 July 2022 in Copenhagen. It will include 22 teams of eight riders each, for a peloton of 176 starters. There is a time trial in the Danish capital on the opening day, followed by two more stages in Denmark on the first weekend before a ‘transfer day’ as the race entourage travels to France for the start of stage four. 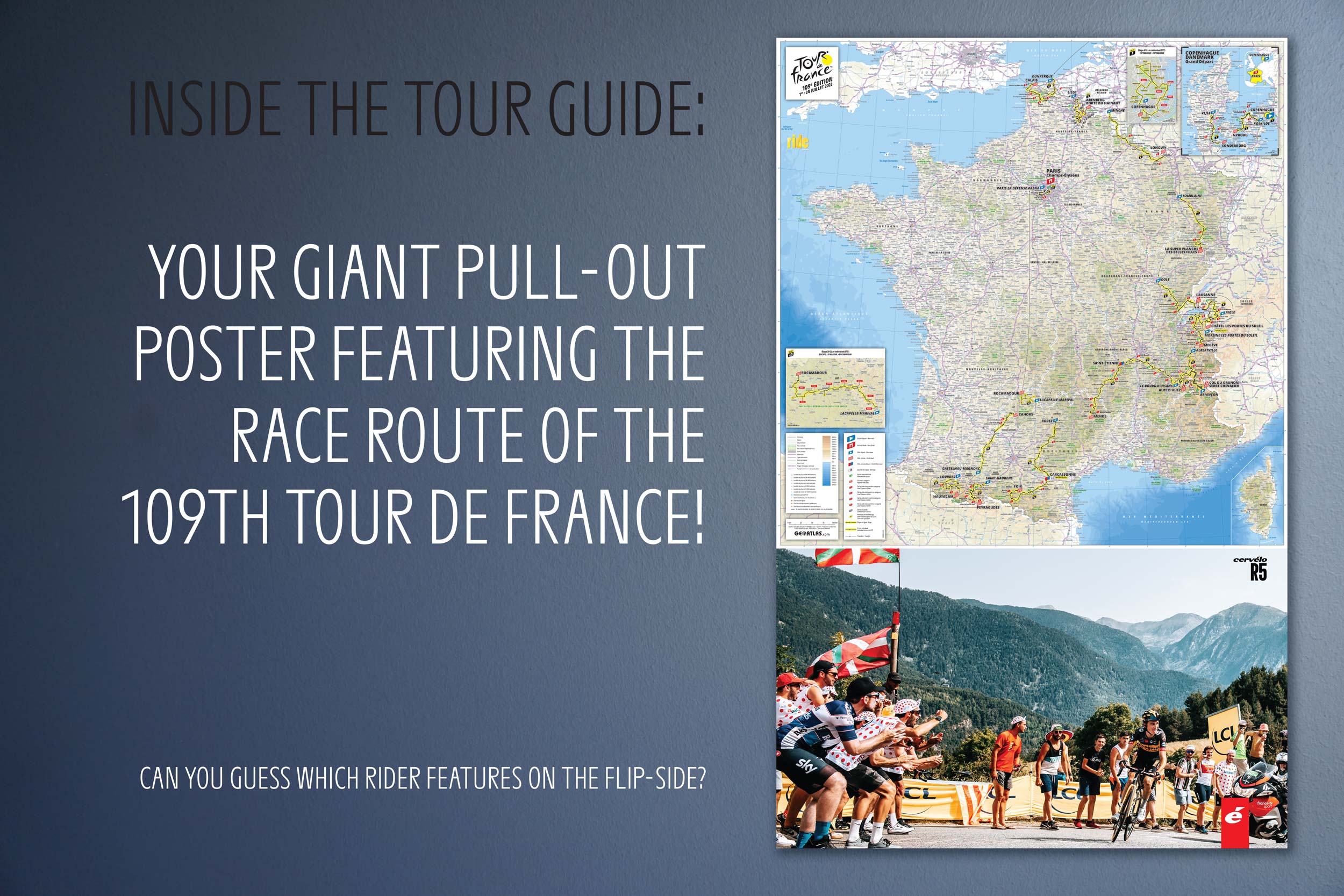 Inside the Tour Guide you’ll find all the details of the 21 stages, complete with maps, profiles, and expert analysis of the favourites for each day of the three-week race that concludes in Paris on 24 July.

We list all the riders from the 22 teams and explain their strengths and weaknesses, hopes and ambitions.

In 2022, there’s an additional element to what has become Australia’s favourite cycling magazine: a preview to the inaugural edition of the Tour de France Femmes avec Zwift (24-31 July). We list details of all 24 teams, including an overview of the favourites for the race that begins in Paris and, after eight stages, concludes atop the climb to La Super Planches des Belles Filles. 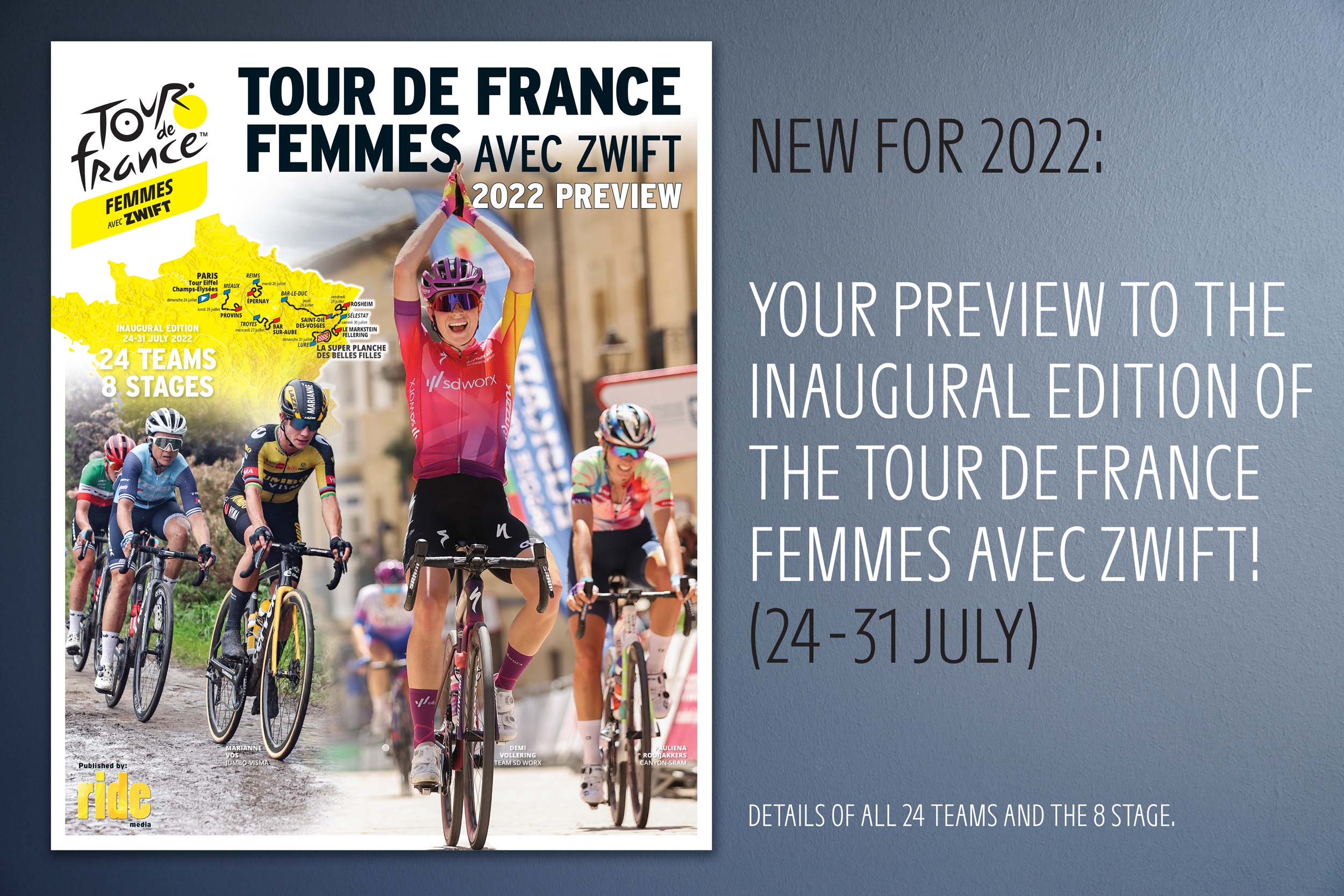 Inside the Tour Guide you’ll find an interview with Pogacar and profiles on the favourites for the title in 2022. There are also interviews with the two race directors, Christian Prudhomme and Marion Rousse, who explain the highlights of the route and their expectation for what is bound to be a compelling month of competition this July. 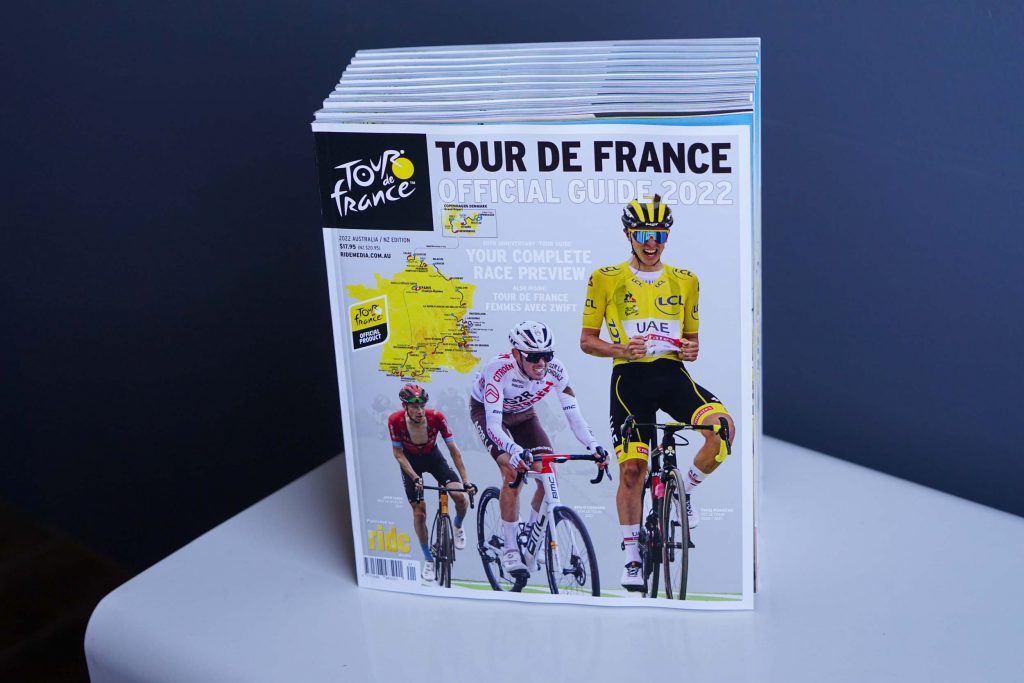 The Official Tour de France Guide (Australian edition) has been published by RIDE Media since 2003. This year it is another huge magazine, weighing in at 653 grams, with a wealth of glorious photos showcasing a race that captures the imagination of sport fans everywhere.

The Tour Guide is your ideal TV viewing companion, helping you keep up with the action from Copenhagen to Paris – via cobbled roads of stage five, and onwards through the mountains Vosges, Alps and Pyrenees. The final weekend of the men’s race includes a time trial on the Saturday and the traditional arrival in Paris on Sunday 24 July.

The women’s race begins on the same day the men’s race concludes. With 24 teams of six making up a peloton of 144, the first edition of the Tour de France Femmes avec Zwift boasts eight stages – from the opening day in Paris, through the Champagne region and onwards to the mountains of the final weekend.

Discover Le Tours – yes, plural – of 2022: make sure you’ve got your copy of the Official Tour de France Guide!

*Note: pre-ordered magazines were lodged for delivery with Australia Post in Sydney on Thursday 9 June 2022. Every effort has been made to ensure timely delivery.