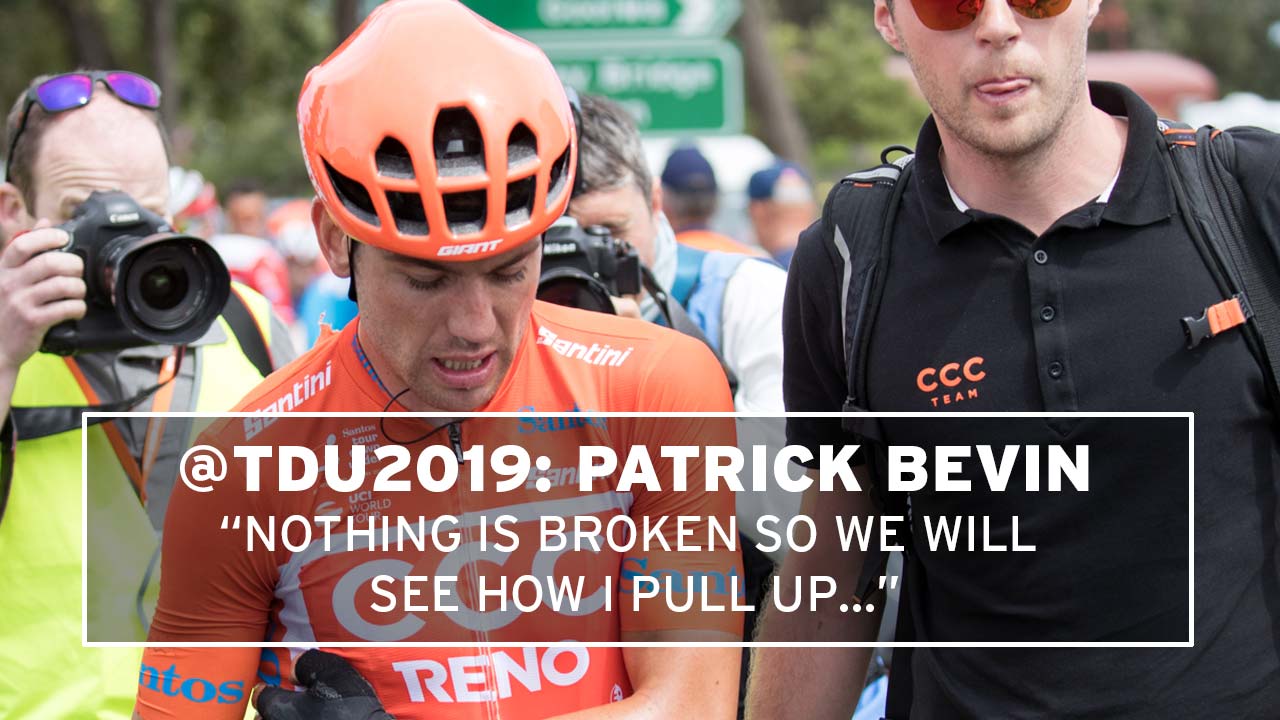 Patrick Bevin: “Nothing is broken so we will see how I pull up…”

“I really hope that I will be able to line up tomorrow. Fortunately, nothing is broken so we will see how I pull up in the morning.” Paddy Bevin after stage five of the 2019 Tour Down Under.

A crash could yet cost Paddy Bevin the title he seemed destined to win. He hit the road hard with just under 10km to go in stage five of the 2019 Santos Tour Down Under but got back on a bike and raced hard to catch the peloton before the finish. He was 43rd in Strathalbyn and retains his ochre leader’s jersey.

“It was such a nervous stage and there was a battle for position all day,” said Bevin afterward.

If only that was all he had to say, alas, he went on to explain the circumstances in a release issued a few hours later by Paddy’s CCC Team.

“All it took was a touch of wheels and I went down.

“I’m pretty banged up right now but I really hope that I will be able to line up tomorrow. Fortunately, nothing is broken so we will see how I pull up in the morning.”

He was sprinting well on a day when wind was a factor but Bevin showed true class against his determined rival, defending TDU champion Daryl Impey. The leader this year versus the winner in 2019: each scored a win at the intermediate sprint, both also earned a second-place each. 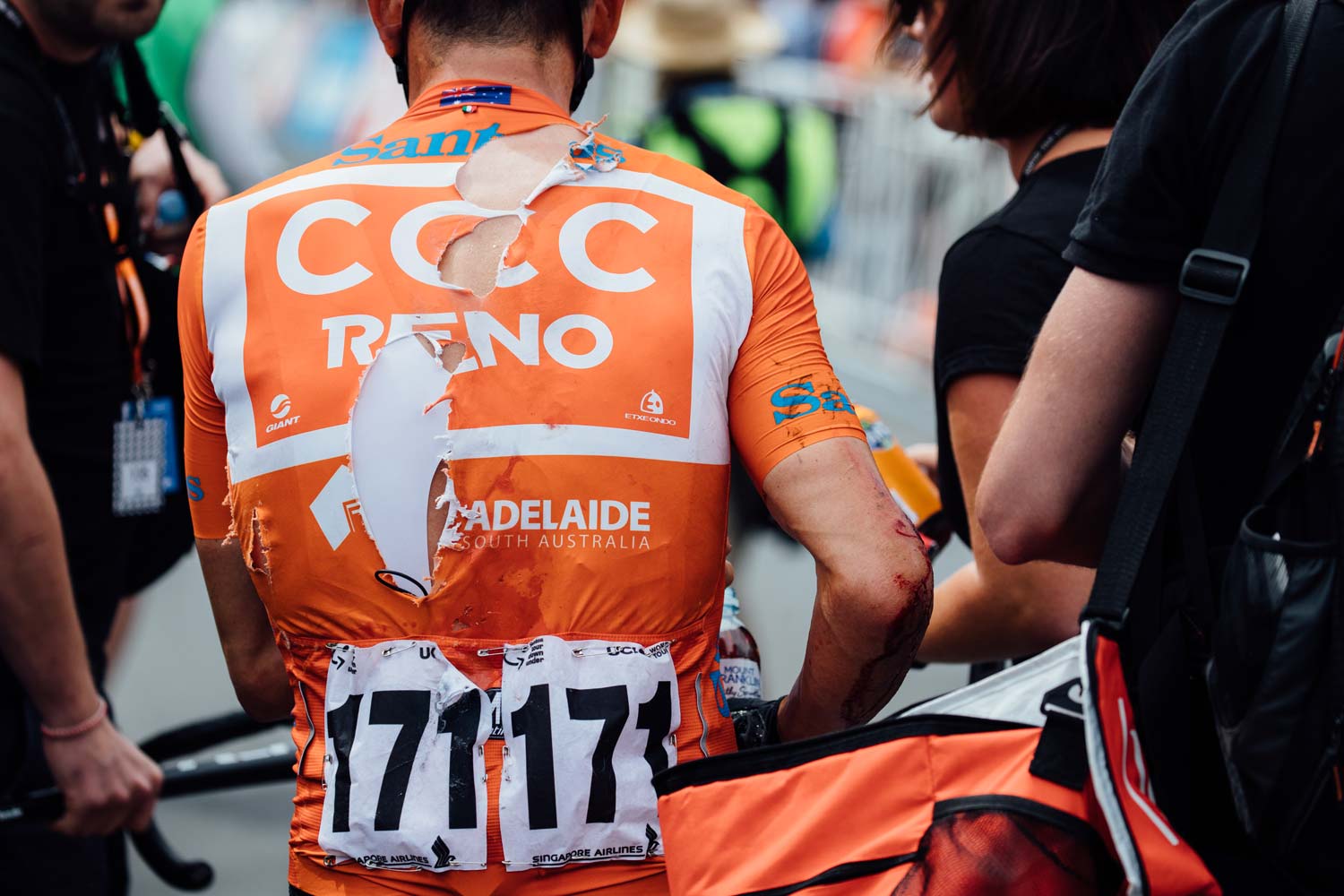 Paddy Bevin after finishing stage 5 of the 2019 TDU.

Impey won the first round, shifting from a seven-second deficit to six seconds. But Bevin reversed it the next time, so the timing was back to status quo as per the beginning the stage.

Then came the touch of wheels, the crash and Bevin’s amazing display of courage.

Clearly dazed and sore, he was handed a team-issue Giant bike and helped to get riding again. Before long he was racing!

The touch of wheels threatens to end his dominant reign at the TDU but he and his team have stated that a start in stage six is what they are aiming to achieve.

The race ended with a sprint and although Caleb Ewan was first across the line he was relegated to 83rd place, last in the group awarded ‘same time’ as the actual, official winner, Jasper Philipsen. The runner-up appeared on the podium but the race leader couldn’t, he was going to hospital for examinations. (For more on the events of the sprint, click here.)

CCC Team’s communication on the matter was issued at 8.24pm 19 January and covers the situation with a comprehensive summary.

The professionalism and diligence shown by the team’s communication officer, Phoebe Haymes, deserves acknowledgement: RIDE Media is grateful for the supply of information, the respect given to Bevin, and ensuring that the news that’s published is factual. 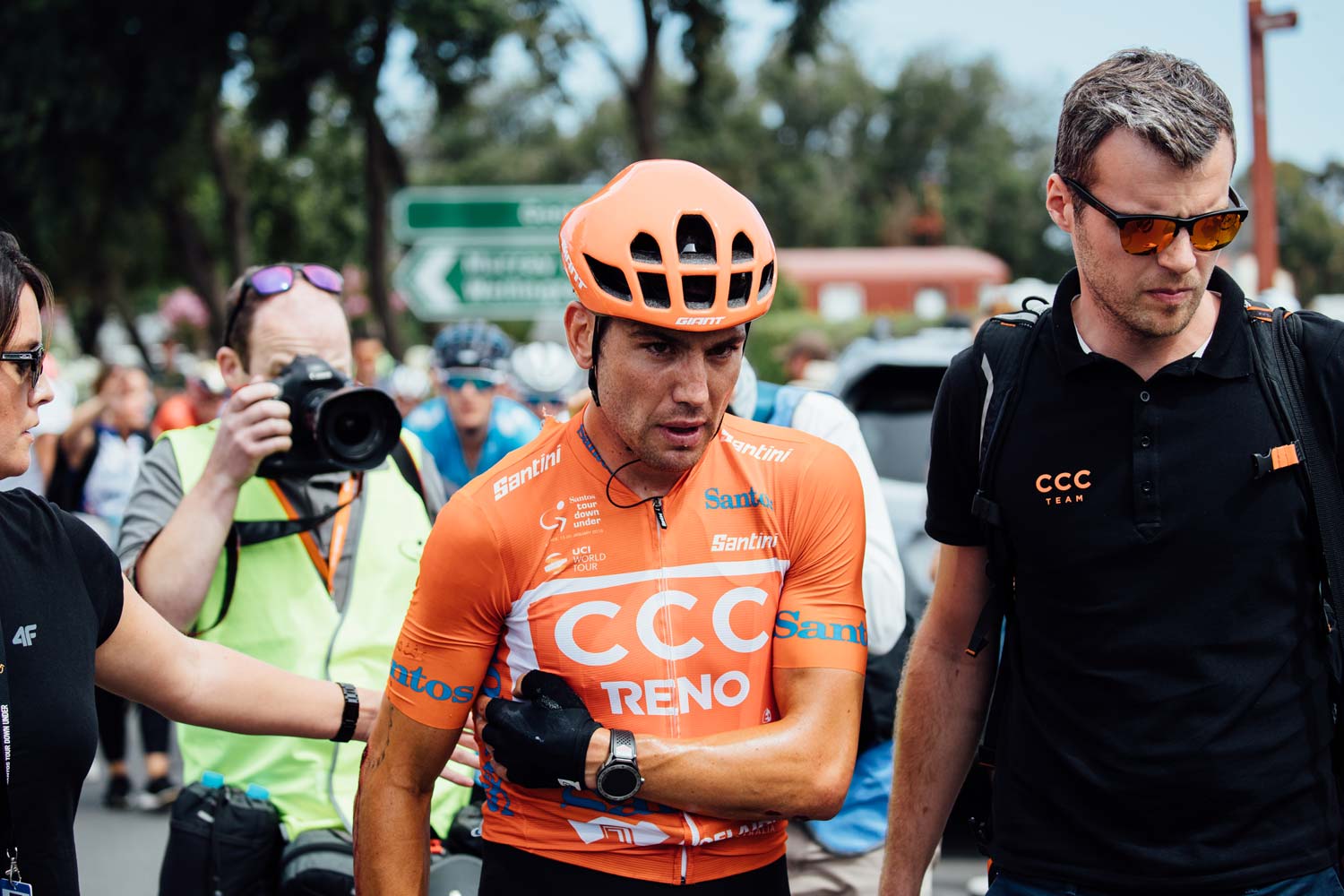 It was a day of drama at the Tour Down Under. Bevin’s statement of his intentions offers hope that the leader of the race, the winner of stage two, will be there on the road to Old Willunga Hill on Sunday.

Tomorrow will be the first time that the TDU has not finished with a circuit race on the streets of Adelaide. Instead, it goes to McLaren Vale… the true home of cycling for a weekend in January each year.

RIDE Media will be there again, the latest instalment in what has been a (very) long succession of stages for me. I can honestly state that I have attended the start and finish of every stage of the Tour Down Under since its inception in 1999… each day offers a lot of memories and, once again, the Saturday of the TDU provided amazing cycling.

The speed of Ewan, the perseverance of Philipsen, the courage of Bevin, the insistence of Impey. There are many stories in each day of racing. And the Tour Down Under continues to do what it set out to achieve 21 years ago: bring cycling to the people, and people to the cycling.

I think all of us will be cheering Paddy Bevin tomorrow. Go man…! (And get well soon.) 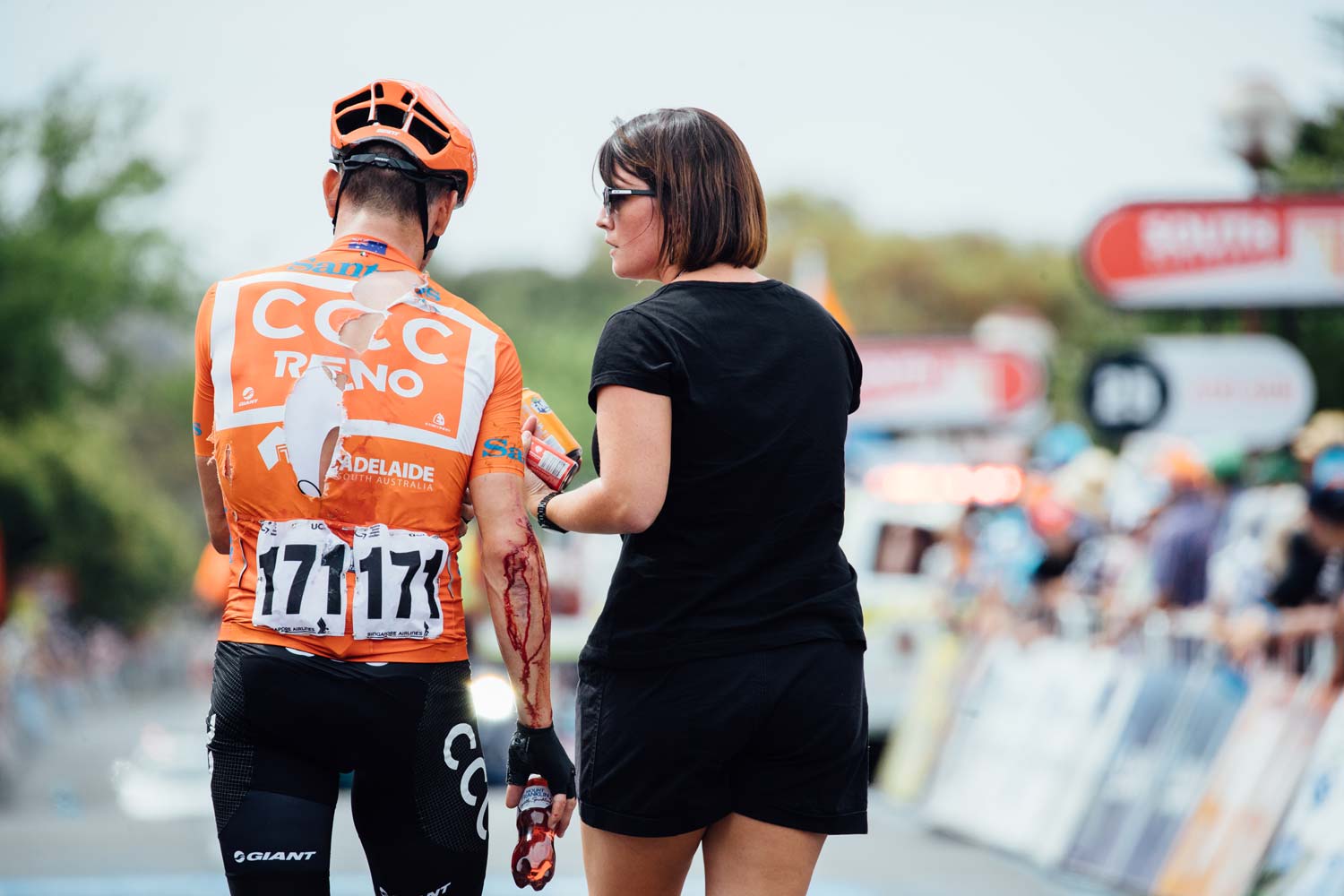 – RIDE Media is at the Tour Down Under with thanks to FE Sports: Australian agents for Ridley, Eddy Merckx, Wahoo, Stages, Corima, and many more cycling products.

– See what FE Sports is all about: www.fesports.com.au 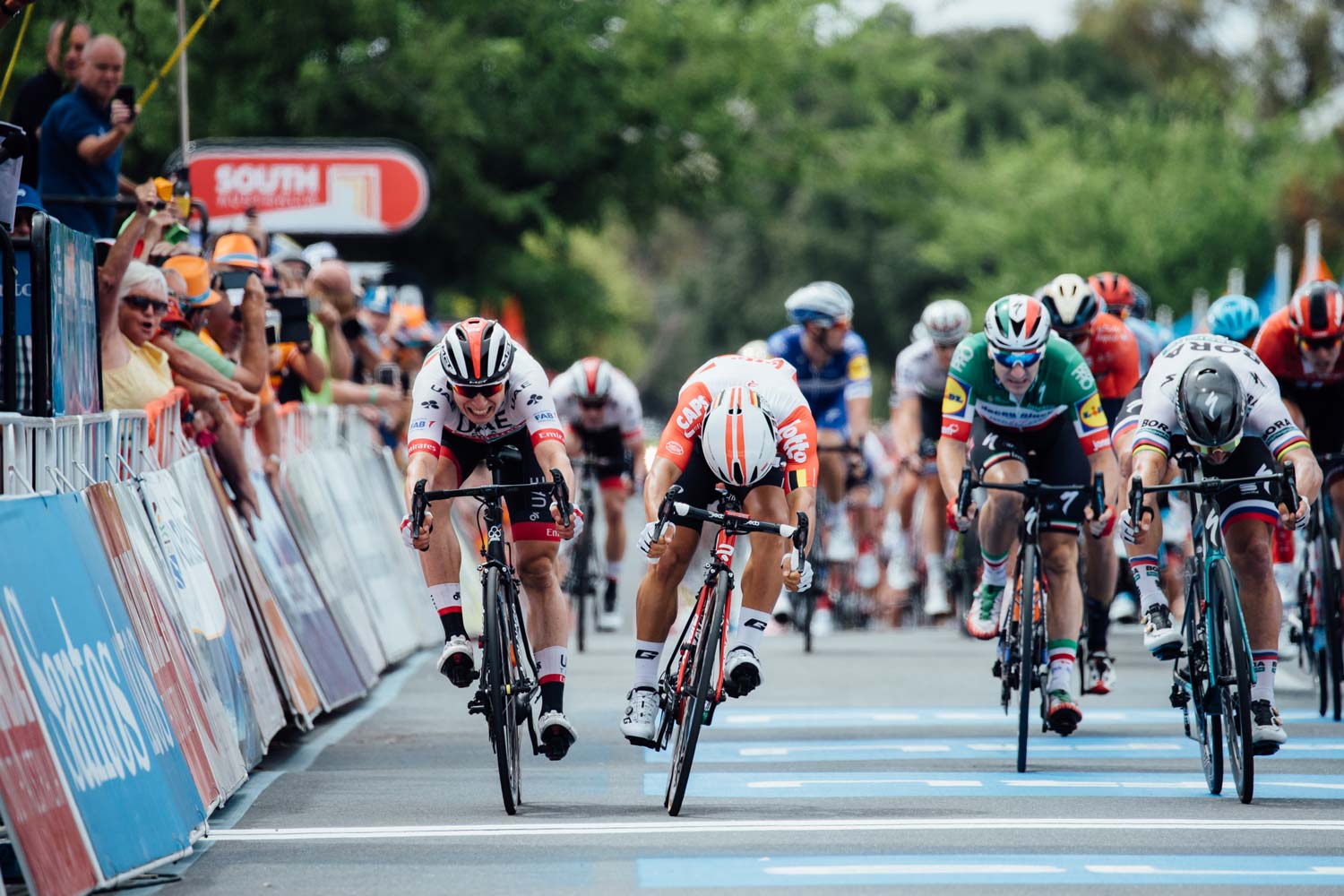