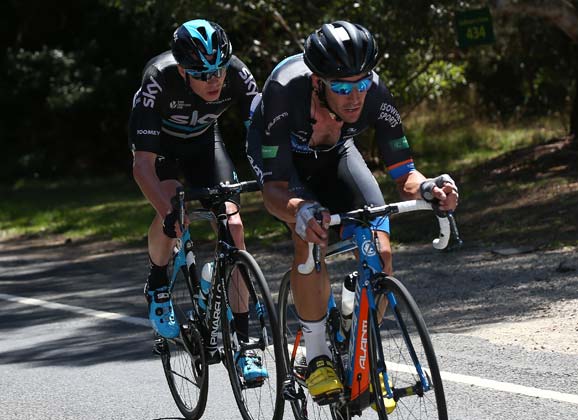 Power analysis of the day Froome first won in 2016

Over the summer Mark Fenner has been offering comment on the power data of certain races of interest. The final stage of the Jayco-Herald Sun Tour was a great display of racing in Victoria and the coach has analysed some of the data of the race that was eventually won by Chris Froome and, using Today’s Plan, Fenner offers this commentary… 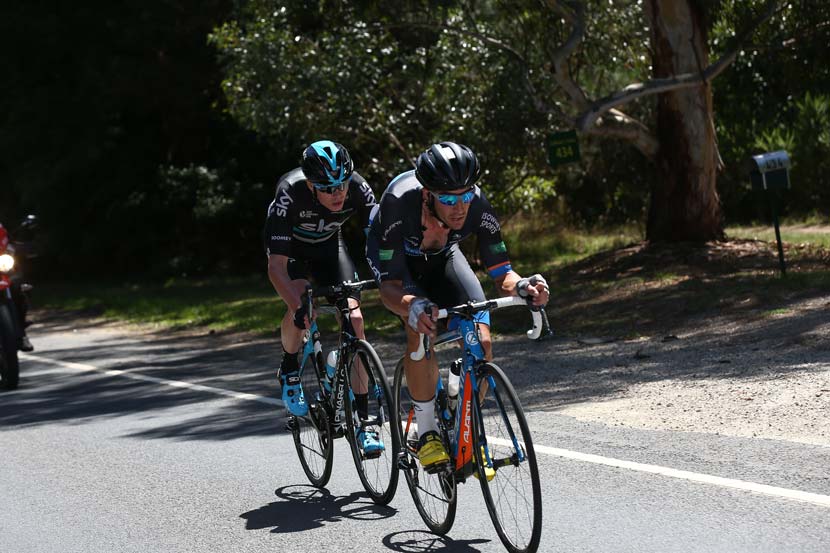 Joe Cooper ahead of Chris Froome in the final stage of the Jayco-Herald Sun Tour.
Photo: Con Chronis

Following into moves on the road and having team representation in breakaways is a vital component of professional cycling. The effect of not having a team-mate in the break places more pressure on other team-mates to chase and do the work to ensure the race evolves and plays out in the way the team directeur sportif  wants it to.

The final stage of the 2016 Jayco-Herald Sun Tour earlier this month was always going to be tough due to the rolling course and the three ascents of the climb at Arthurs Seat.

The battle of who would eventually wear the yellow leader’s jersey was never a foregone conclusion.

With Team Sky controlling the peloton and applying their usual tactic of holding breakaways to a small time gap and then riding them down towards the finish, the other teams needed to take up the challenge of upsetting the status quo and putting the best team in the world under pressure.

After Pat Shaw of Avanti-IsoWhey Sport and the three other riders who made up the initial breakaway were caught, Sky held a solid tempo on the first two ascents to deter any attacks and to whittle down the main bunch.

On the second climb they turned the screws a little tighter and the bunch was reduced to a small leading pack containing little more than 40 riders.

At the top Chris Froome attacked to take the KOM points and Avanti-IsoWhey’s Joe Cooper moved off the front of the lead group to follow his move. Instead of just sitting on, Joe rolled over the top of Froome and continued with the move.

In this analysis we will look at the power Joe Cooper produced to follow and then make a race changing move on Arthur’s Seat.

This first graph (below) has the final three ascents of Arthurs Seat highlighted and the main intervals and efforts in this segment.

This next graph (below) shows the 2nd climb highlighted and zoomed as well as Joe Cooper’s time off the front leading into the bottom of Arthur’s Seat for the final time.

In the final ride graph (below) we can see where Cooper and Froome maintained their tempo to hold of the final selection of riders and Joe spent a lot of time riding on the front, allowing Froome to conserve his energy leading into the base of the final ascent up Arthurs Seat, along with the moment Cooper responded to Froome’s attack before finally cracking and dropping back through the bunch.

In the end Joe Cooper couldn’t go with Chris Froome as he opened up at the base of Arthurs Seat and rolled in some four minutes down on the stage and overall race winner from Team Sky.

The move over the top of Arthurs Seat certainly changed the race and with Chris simply sitting on he had and armchair ride to the base of the final climb.

Having Chris Froome – the reigning Tour de France champion – win on top of the iconic Arthurs Seat climb was a great spectacle for the race and for all the thousands of spectators who turned out to see a great champion take the win.