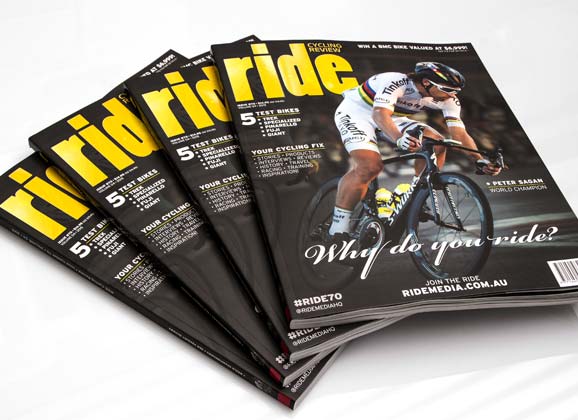 RIDE Media is proud to present the 70th edition of RIDE Cycling Review (volume four of 2015). This issue rounds out the year with 228 pages of cycling goodness. Inside you’ll find all the quality content you’ve come to expect, and you’ll see it presented in a new, fresh format.

As usual, there are five comprehensive bike tests, including all the initiatives that we’ve created to help ensure readers get as much information as possible on the products we review – the Build Report, flex test jig data, weights of every component used, rider commentary, gorgeous studio photography… etc. There’s also the renamed ‘Initial Observation’ comments (ie. what we had previous called ‘Round Table Observations) but it’s now in a different layout that showcases the highlights of each bike as well as being easier to take in.

For the second time we feature Peter Sagan on the cover, this time in his world champion’s jersey while racing in the Abu Dhabi Tour at the end of the season.

As it says on the cover, this magazine is “your cycling fix” – with stories, product reviews, interviews, history, travel, racing, training… and inspiration!

Printing finished over the weekend (12 and 13 December) and distribution has begun.

Subscription copies have been lodged with Australia Post today (14 December) and we look forward to hearing what you think of the magazine once it turns up in your mailbox.

Newsagents in most states will have theirs on sale from Thursday 17 December (excluding Queensland and WA, which will have it on sale from Monday 21 December).

It has been an amazing ride all the way through the 2015 season and this end-of-year edition is something we are particularly proud of. There are many highlights in the print edition as well as numerous online extras that will appear on ridemedia.com.au in the coming weeks.

Be sure to keep on checking in on our site and our social media – Facebook, Instagram and Twitter. It may be near the end of the year, but we never stop riding. There’s always something to share and we greatly value your comments, feedback and suggestions…

We prompt you for a reaction to the question on the cover: Why do you ride? (Everyone has their reasons and we’d like to know what draws you in.)

And, of course, we’ve love it if you could let us know what you think of the design tweaks for the 70th issue of the magazine once you’ve had a chance to read through it.