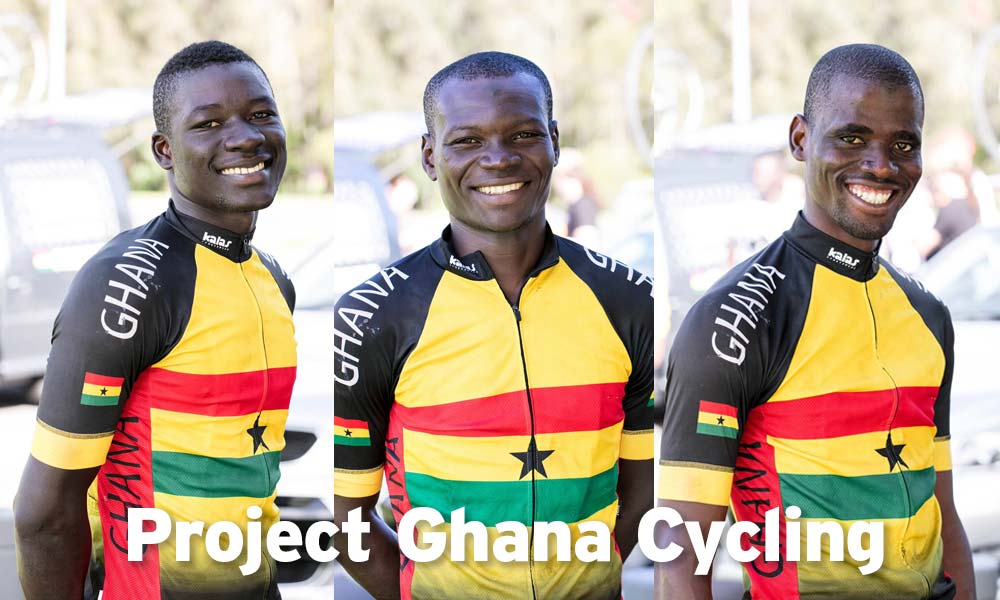 Athletes don’t have to win to inspire others. Visiting cyclists from Ghana provided a catalyst for many Australians to consider how fortunate they are… while riding bikes and building friendships that will last a lot longer than the events on the Gold Coast in April 2018.

Sometimes you just can’t tell where a bike ride might take you. Sure there’s usually a plan, involving a route and a time frame, and maybe a cafe. And most of the time there’s not a delegation of 4,400 international athletes from 71 countries in town for a major competition. But it still came as something of a surprise when one particular bike ride, and a chance meeting with some Ghanaian athletes getting off a bus, turned into a five-week odyssey of cross-continental and cross-cultural proportions that would engulf some of our lives and (temporarily at least) redirect our sense of purpose. This was the case with what quickly became “Project Ghana Cycling”.

If you’ve read the first part of this story, you already know a little about the backstory about the overwhelming support that arose in response to a simple request for some spare parts.

A proud nation with some very strong and dedicated athletes, that simply does not have the exposure to equipment and resources that we take for granted, was assisted by the spontaneous outpouring of generosity shown by the Australian public.

What began that day as a quest for equipment snowballed into an exploration of the culture of competitive cycling in Ghana, and a desire to perhaps help reform the system into something that could better compete on the world stage.

(It’s hard to fathom that cyclists at this level would never have seen Di2 components, never have heard of eTap, and wouldn’t recognise the difference between training tyres and race tyres. From what we can ascertain, it’s largely a matter of exposure… what they see locally, what is available for retail purchase in Ghana, and what is going on at the continental level in Africa. It was certainly an eye-opening experience for Team Ghana to step into a local bike shop, and to see the huge varieties on display for use by hobby cyclists and weekend warriors in Australia.) 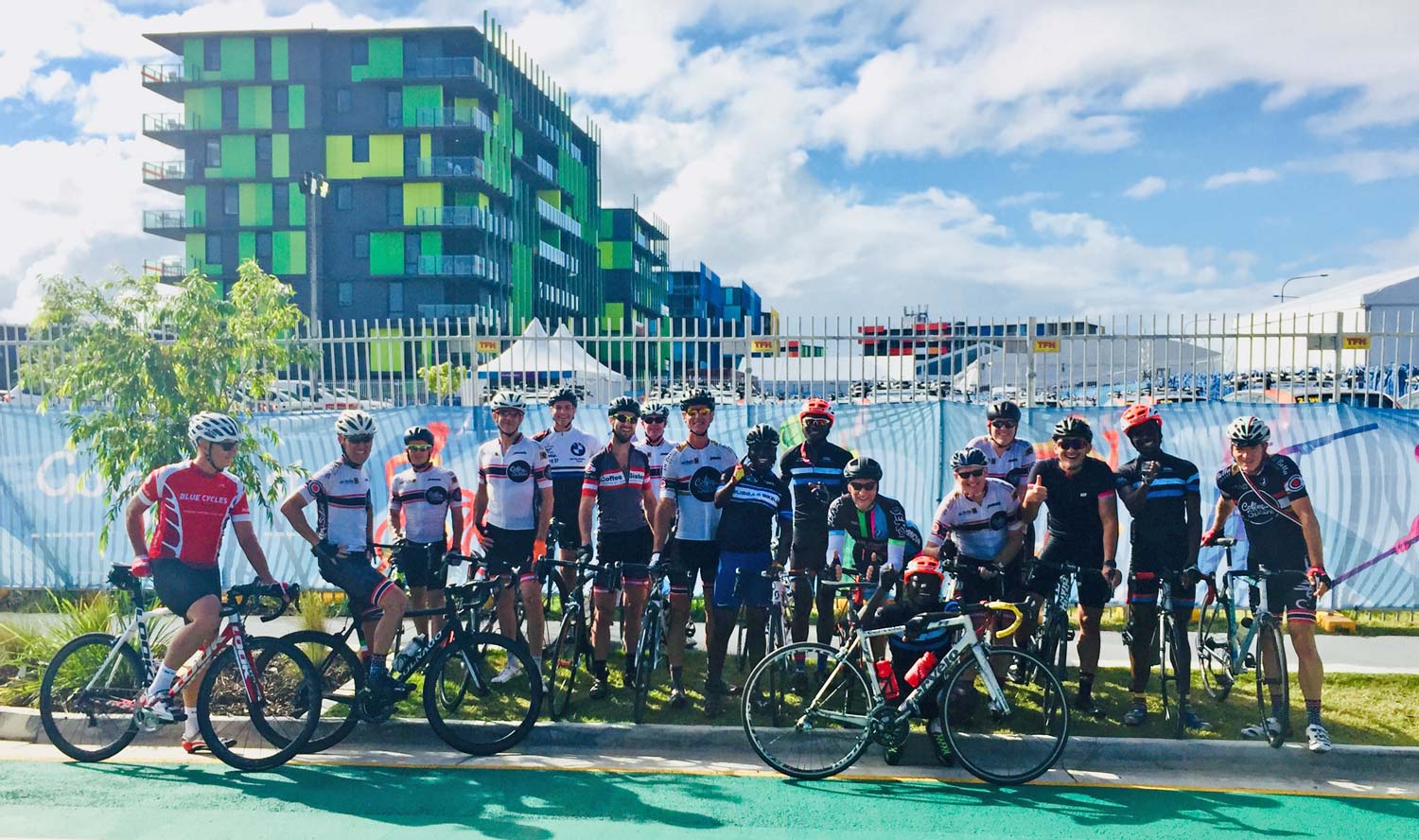 While the buzz was building: read how Project Cycling Ghana began… 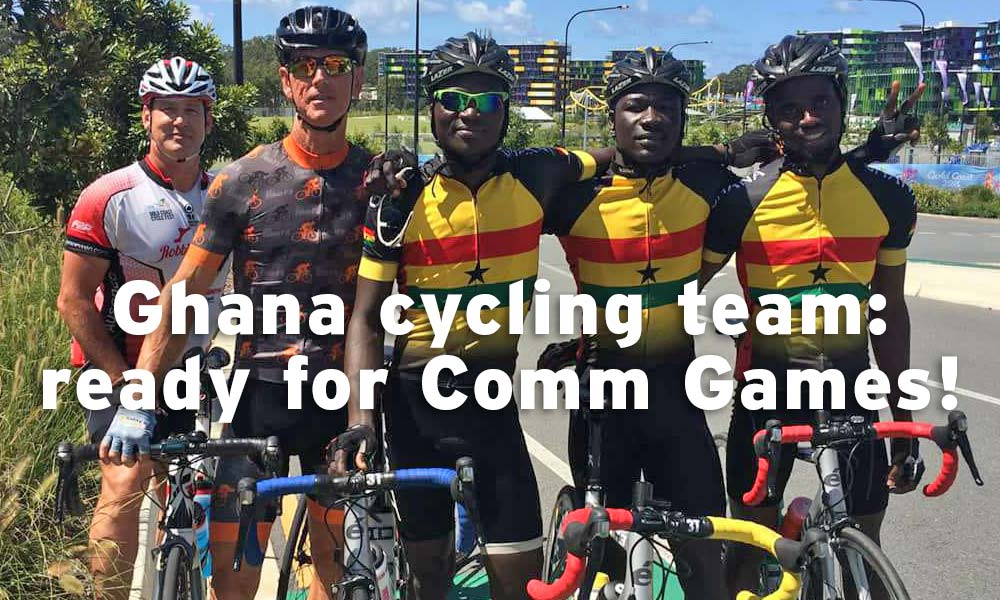 Regardless of their own personal backgrounds, the three cyclists representing Team Ghana – Abdul (captain), Anthony and Razak – were simply here to do a job: to ride their bikes, to the best of their ability, among the elite of the Commonwealth, for the shared glory of international competition. And although not perfectly equipped, these guys are not inexperienced. Two of them have competed at a previous Commonwealth Games (Glasgow, 2014). One of them is the current national road race champion, and another is the current time trial champion. Their six-rider team (The Golden Pedals) is the title-holder of the Route de L’Est, a title they’ll be vigorously defending shortly after they return home to Ghana from the Gold Coast.

Training with them on the Gold Coast has also been an interesting experience. Understandably, they are much stronger than the local club riders, and so training rides were often a matter of saying, “Here’s the route, there’s the hill… wait for us at the top!”

Hills are not something that comes naturally to them, as much of the Ghanaian landscape is quite flat. At least one rider (Anthony) has to travel 125km from his home just to get to a hill.

The team members had their first ever experience on electronic trainers (Wahoo and Tacx)… and there was little holding back on a two-hour interval session training program; the sweat flowed like a heavy rain. They also got a taste of local club racing (which is something of a rarity for them back home), and, of course, stood on the podium more than once. And their celebrity seemed to follow them everywhere they went.

One thing that seems to have been a fairly common experience with locals during the Commonwealth Games is the sense of community that flourished soon after the international delegates arrived. 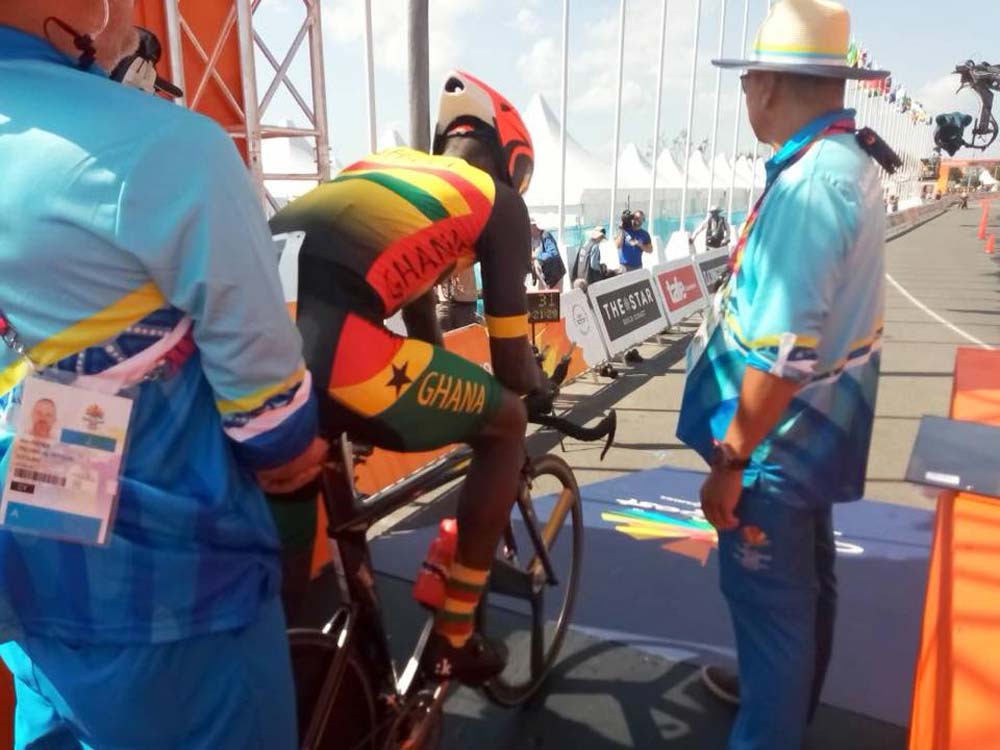 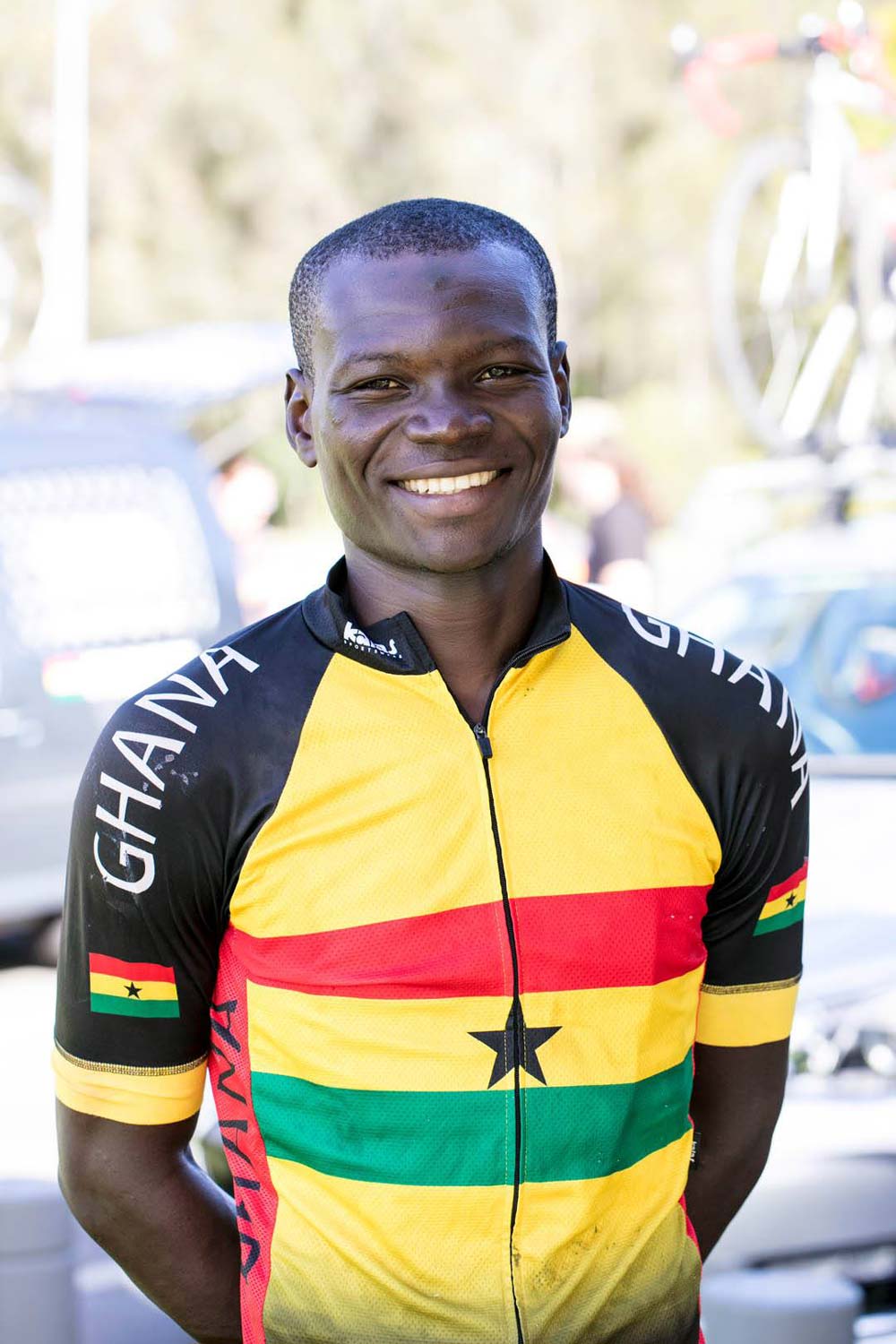 People everywhere seemed kinder and more tolerant, and random conversations with strangers (around the shared theme of “What are you going to see?” or “How are you enjoying the games?”) seemed easy and natural. Athletes were everywhere, and the opportunity to engage with them, or to simply wave and wish them well, was omnipresent. It was quite a delightful and refreshing experience. This was perhaps felt nowhere more strongly than with the cycling team.

As we rode the streets of the Gold Coast together, heading out for a training session or a coffee, the zeitgeist seemed as foreign as the athletes themselves. Motorists were beeping their horns in friendly acknowledgement, waving their hands in salutation, winding down their windows to shout… “welcome”, and “good luck!” It was quite surreal, and we almost felt like the chaperones of rock stars. A stop at traffic lights invariably meant a quick chat with a passing driver, or the sound of a phone-camera shutter as passengers got their souvenir.

For those of us that comprised the team from Project Ghana Cycling, the experience was not only eye-opening (in terms of what they were used to, what they needed from us, and how privileged we are) but also door-opening. 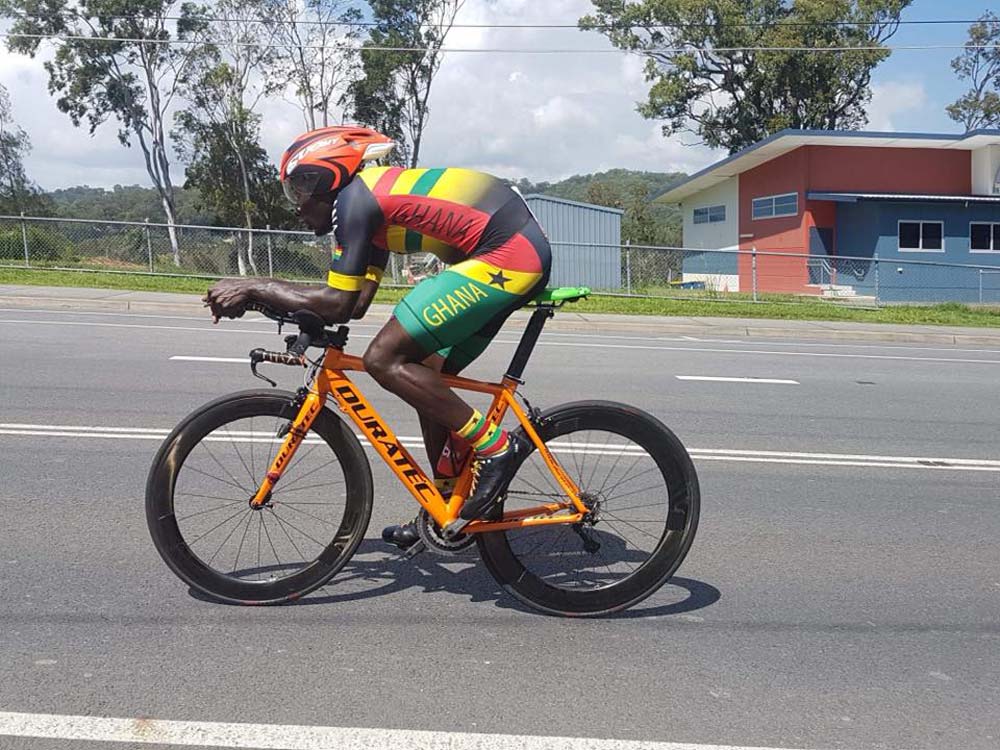 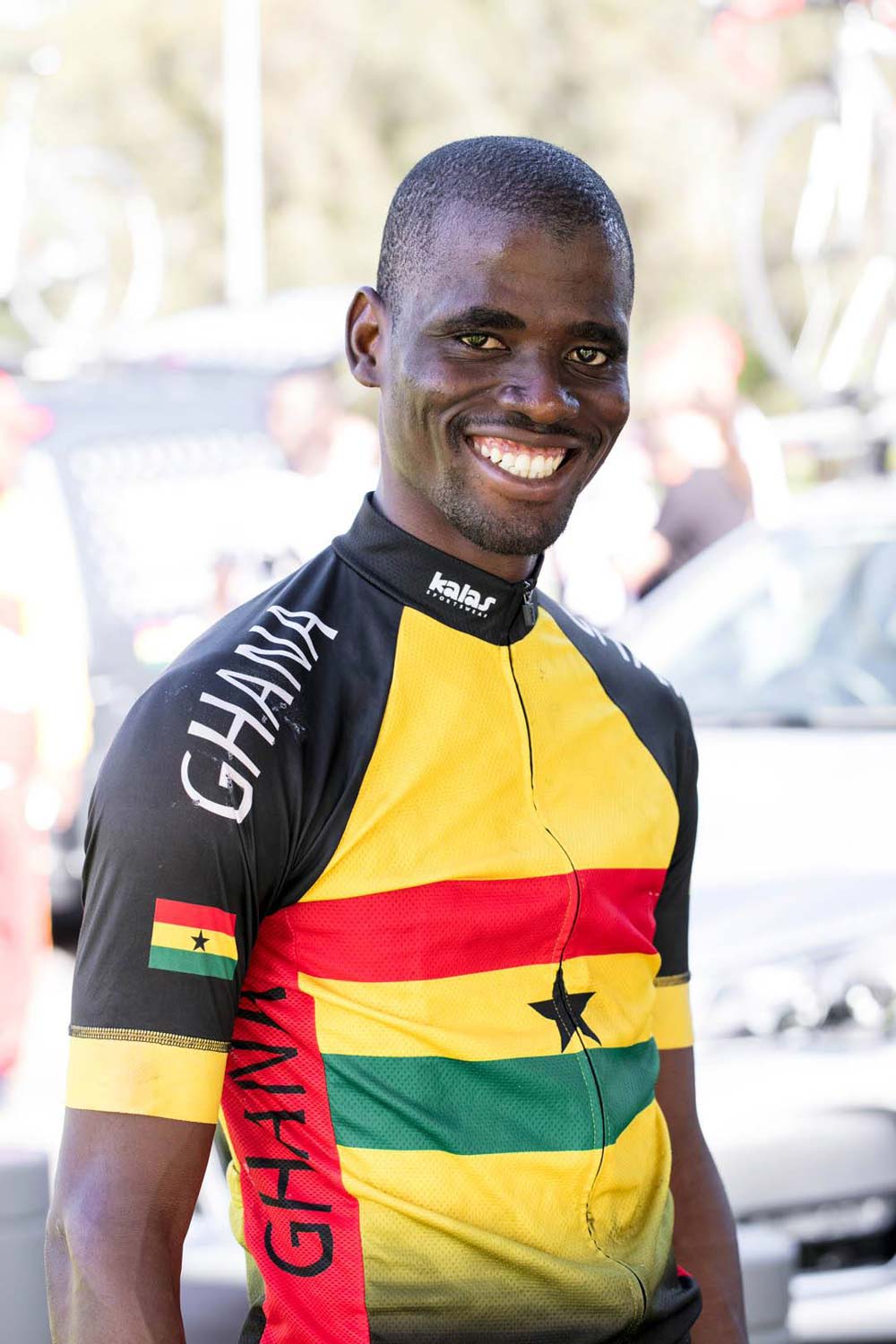 An unintentional but direct result of our involvement with the team at such an intimate level was that we gained access at various times to places and opportunities that we never would have considered. Sharing their training rides was obviously a part of this, but taking them to meet local legend Robbie McEwen (on more than one occasion) for a chat and a coffee was a wonderful bonus.

For a couple of members of the project team, access to the Games Village was granted one night. For another, it was the amazing opportunity to drive the support vehicle for Team Ghana in both the time trial and the road race. (And apparently, the speeds required to keep up with a race peloton on suburban streets can be quite a hair-raising experience in itself!)

The media response to Project Ghana Cycling was also quite overwhelming. Local print media were understandably interested, but were soon followed by national television stations (especially Channel 7, who had broadcast rights to the Games). The BBC even came out to do a story during one of Team Ghana’s training rides, on the subject of philanthropy.

Admittedly, there was some initial concern that all the media attention (and interviews) might distract the athletes from their focus on racing. However, they actually seemed to be enjoying their celebrity status, took the interviews in stride, and maintained their competitive focus extremely well. By race day, they only had one thing in mind: get up front and stay out of trouble! (This proved easier said than done, as a first-lap clash of wheels split the peloton early on.) 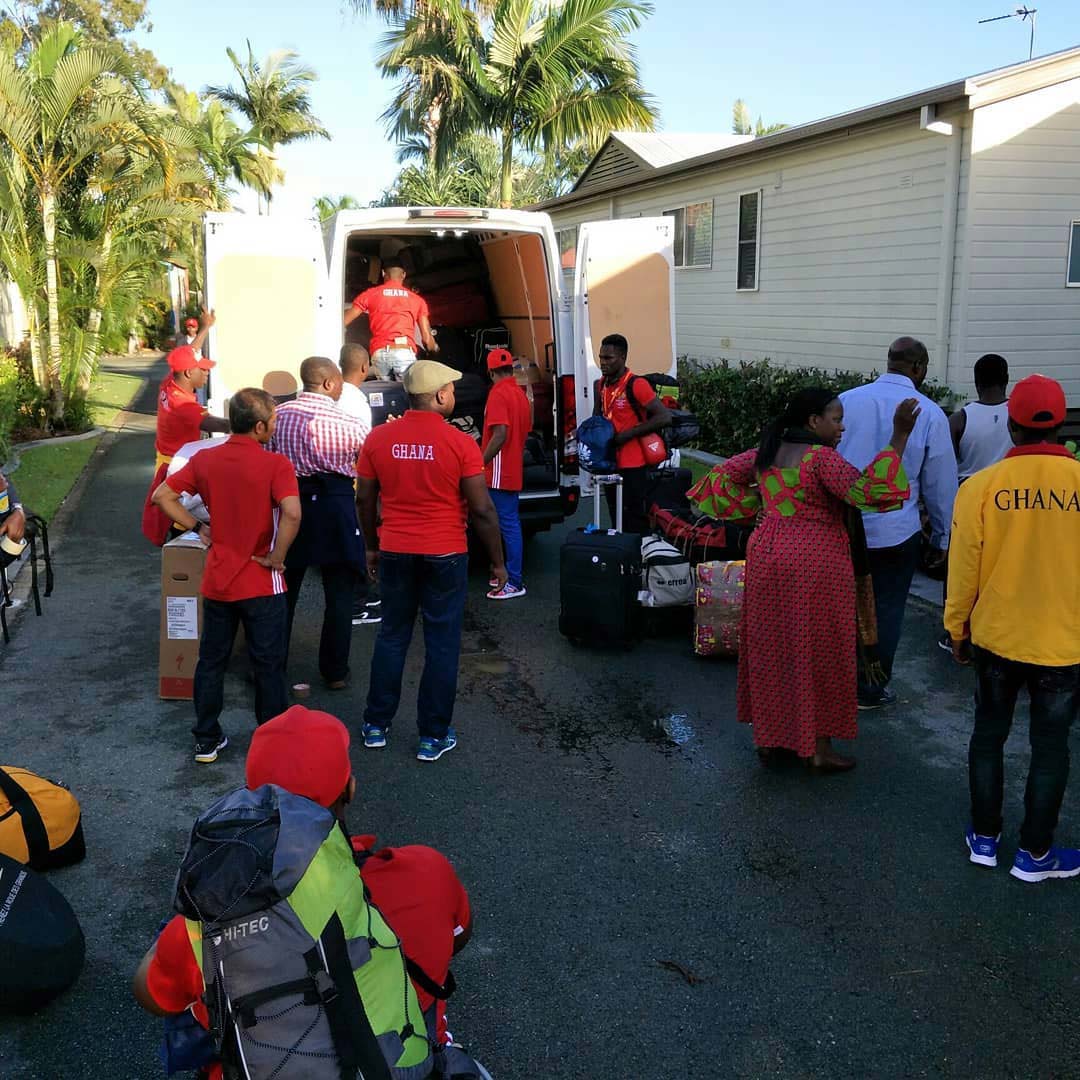 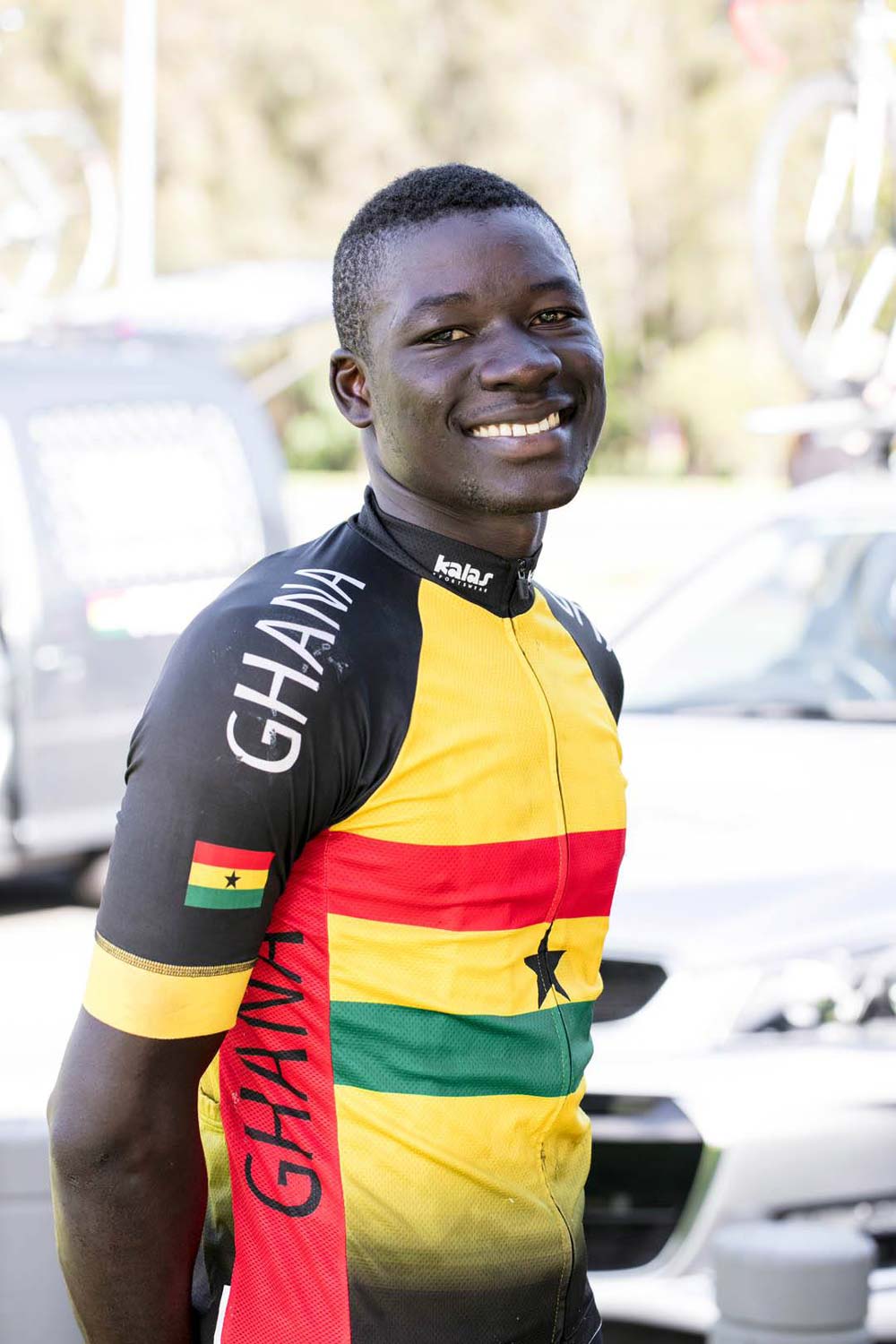 At the end of the day (and of the Games), Team Ghana made a good showing and represented themselves well. Their presence on the road race course drew cheers from the knowing crowd as loud as those reserved for the Australian contingent. Their position halfway down the field was more than satisfactory, given the strength of the pro-peloton elites in the race. Their humility and gratitude for the support they’d received were heart-warming. And their re-dedication to not only compete back home, but to bring the level of cycling in Ghana up to a higher level, is inspiring.

They take with them an amazing new level of experience, not only in elite-level racing but in their knowledge of what exists in terms of infrastructure, support and equipment. They take with them tens of thousands of dollars’ worth of donated and purchased equipment, much of it brand new. They take with them the friendship and admiration of a small group of accidental adjunct staff (who performed as soigneurs, coaches, drivers, personal shoppers and anything in between). And it’s probably fair to say that they take with them the hearts and well-wishes of a great many locals who, for a few short weeks, became the adoptive family of an unlikely team of cyclists with the motto, “From Gold Coast, to Gold Coast, for Gold!”