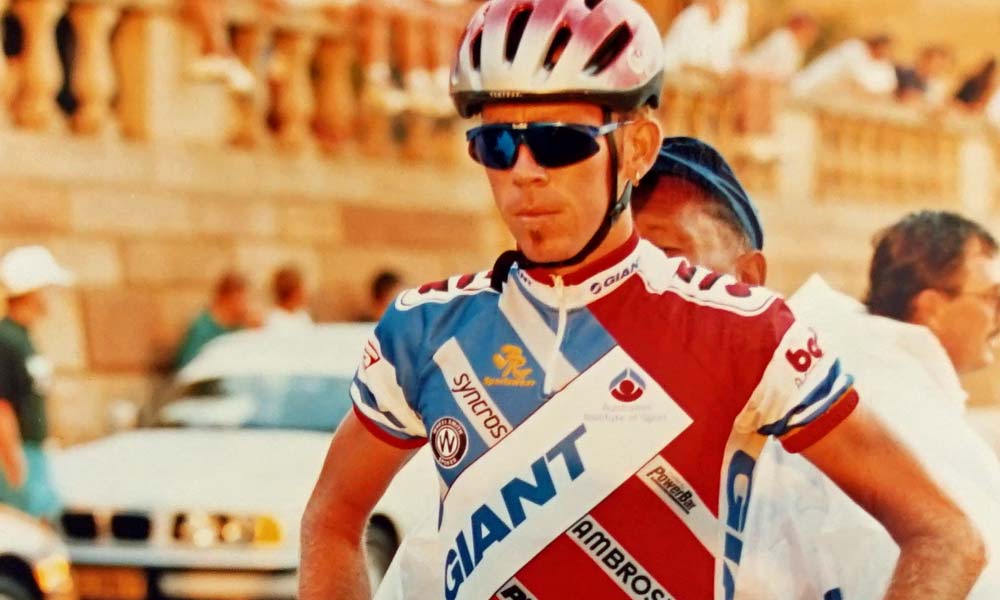 Brett Dennis was a key member of the Australian cycling community. He is no longer with us. While we mourn his passing, we also remember some of his contributions to ‘our’ sport…

When Australian cycling was at a turning point, there was one key player who helped shape the sport’s destiny in his country. Brett Dennis was something of a larrikin during his formative years as a cyclist but he had quite an engine and although he’s long been retired from competition, the legacy of his conquests on the bike are significant.

The rider who was almost universally known as ‘Chicken’ is no longer with us. He passed away on Friday 22 September 2017, aged 45. Full details of his death are yet to be released. There are no suspicious circumstances.

Originally from Mount Isa, he met his future wife, Kylie, while on a training camp with the Australian Institute of Sport road cycling team in the Snowy Mountains.

The father of two teenagers, Callum and Briarna, the family settled in Canberra after Brett’s racing days and, in recent years, he returned to cycling as a way of getting some exercise – and, occasionally, testing his legs in local criteriums.

By 2017, cycling was something of a release for Brett and he was no longer closely involved with the sport.

The last time I saw him we were both out on the bike, riding with our families. That was at Mount Stromlo, near Canberra, earlier this year. Of course we talked about “the good old times” and how it would be nice to catch up again when we weren’t cycling and reflect on what it was like during those “Salzwedel years”.

He was chirpy and happy to be back on the bike. “These days I’m just riding,” he laughed. “Racing feels like another lifetime ago.” 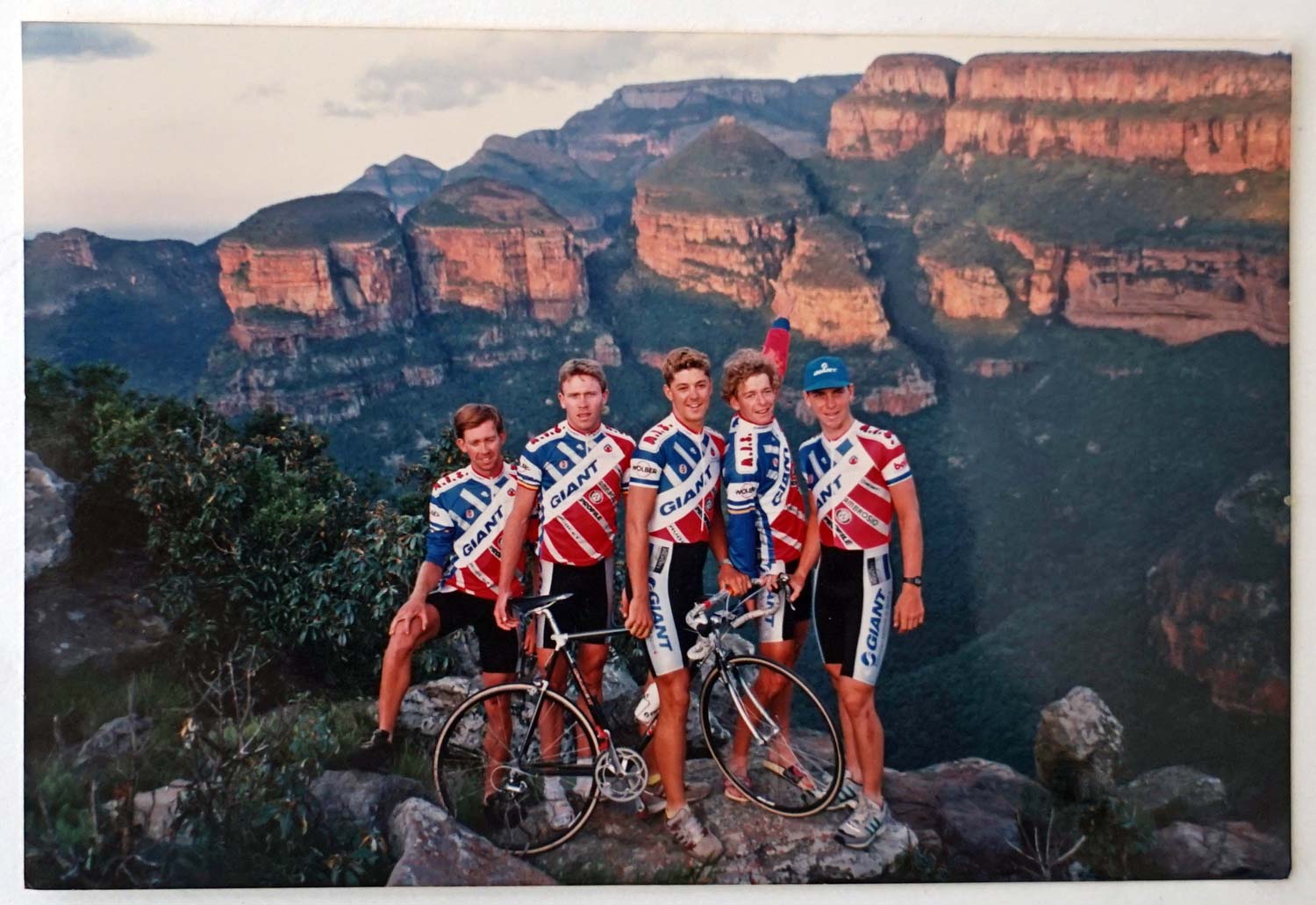 From left to right (above): Brett Dennis, Adrian Nolan, Rob McLachlan, Damian McDonald and Henk Vogels – in South African, circa 1993.

It was under the guidance of Heiko Salzwedel that Brett Dennis flourished and became one of Australia’s finest road cyclists.

One of his most publicised victories was as a member of the quartet that won the team time trial gold medal at the 1994 Commonwealth Games in Canada. Had the course been properly measured (instead of being slightly shy of the requisite 100km) the Australian team would have posted a world record time.

Dennis raced alongside Henk Vogels, Damian McDonald and, for the first 10km or so, Phil Anderson in that TTT.

It marked the end of an amazing career for Anderson who retired shortly afterwards and it signalled the arrival of a new generation of Australians as a force in road cycling.

Until then, the main focus of the national team had long been track cycling. But the recruitment of Salzwedel prompted a change in direction that rapidly took shape throughout the 1990s… and essentially continues to this day.

There were equipment innovations that were part of that TTT; it was, for example, the first time an 11-tooth cog was used by any Australian riders… this little detail was part of what was a particularly innovative approach by the former East German coach who had come to Australia in the early 1990s as part of a push for greater prominence in world cycling.

It is also worth noting that, according to assistant AIS coach Andrew Logan, it was the first time that any cycling team had ever used two-way radios in competition; this happened in both the TTT and the road race – “and,” said Logan, “no one had any idea of what we were doing!”

They did so with equipment borrowed from motorsport and ‘Chicken’ didn’t mind listening to his coach’s orders. 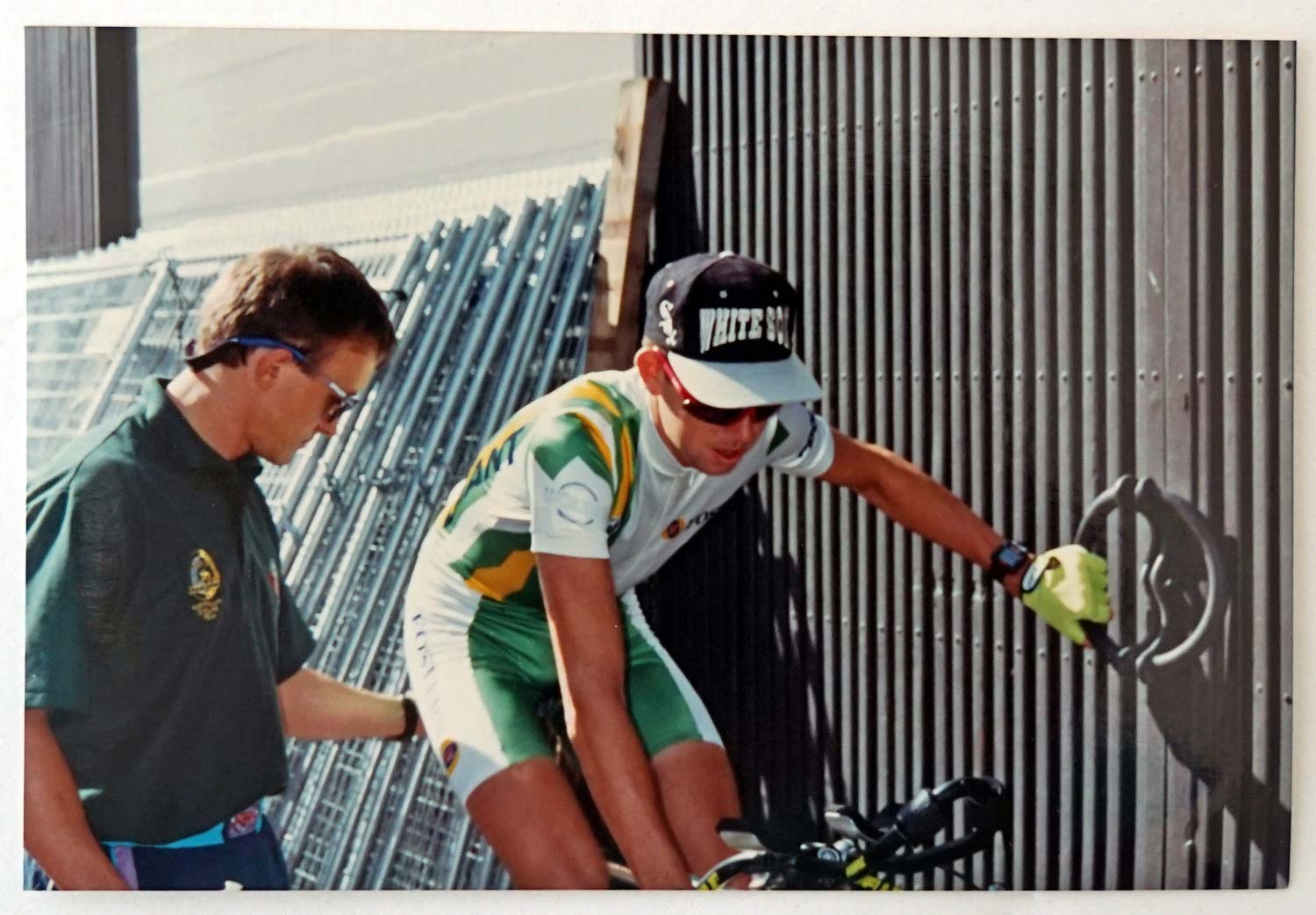 A young Brett Dennis in 1993 with Victor Popov (above)…

Brett Dennis had been a pioneering cyclist but he will be remembered as much more than that. He and Kylie were married before he set off on his international adventures with the national team.

By the time that he was part of the ZVVZ-Giant-AIS pro team, his larrikin ways had abated (a little) and he become known as “a TT specialist who could climb”.

He suffered setbacks but remained a committed competitor through to the late-1990s when he walked away from a sport that was really beginning to take off in Australia.

The victory in the 1994 Commonwealth Games team time trial came only three months after he fractured a femoral head greater trochanter, near his hip, after a nasty crash. He returned to the AIS for recuperation and was quickly racing again… and winning!

Another member of that quartet, Damian McDonald, tragically passed away in a car crash in a Melbourne tunnel in March 2007.

In the mid-1990s, riding off the legacy of conquests of AIS riders from that generation, the bicycle company Giant signed on as a sponsor of a pro road cycling team for the first time. Originally known as Giant-AIS, it inherited a Czech sponsor ZVVZ, and Salzwedel’s dream of a fully-fledged international team had become a reality.

All this was made possible because riders like Brett Dennis proved that Aussies were able to be competitive in world-class events. 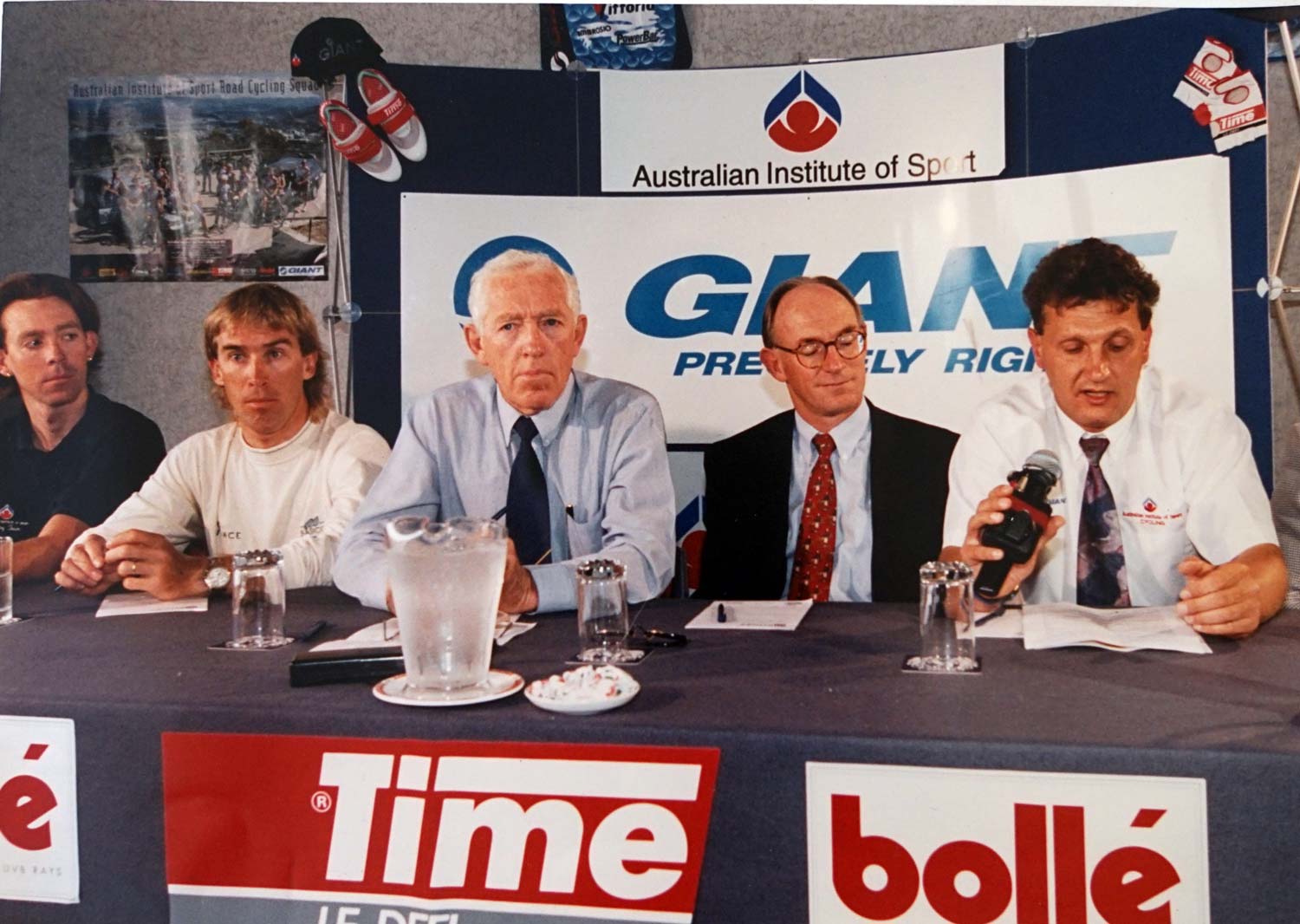 From left to right (above): Brett Dennis, Neil Stephens, Ray Godkin, John Boultbee and Heiko Salzwedel at the launch of the Giant-AIS team in 1996.

Brett Dennis sat alongside Neil Stephens, Ray Godkin, John Boultbee, Heiko Salzwedel and Olympic gold medallist Kathy Watt at the launch of the Giant-AIS team in 1996. He was a rider of repute who could race with the best in the world and later mix with leaders of the corporate world and government to explain the beauty of cycling.

He was a thin rider with a freckled complexion and, by the end of his riding career, hair that was pulled back in a pony tail.

Long after his racing days, although he often preferred to ride on his own or with his family – rather than any large, social bunchs – he kept in contact with Salzwedel and a few others from the cycling community.

No one ever had a bad word to say about ‘Chicken’. He had panache on the bike and empathy off it.

He would talk or listen and generally make those around him feel engaged.

There is a lot more to Brett Dennis than what he did as a cyclist but there are many in ‘our’ community who knew him well and, alas, never got the chance to say goodbye to their mate.

Our thoughts are with his family and friends at this sad time.

His funeral service will be held on Thursday 5 October at Norwood Park, Mitchell, ACT. 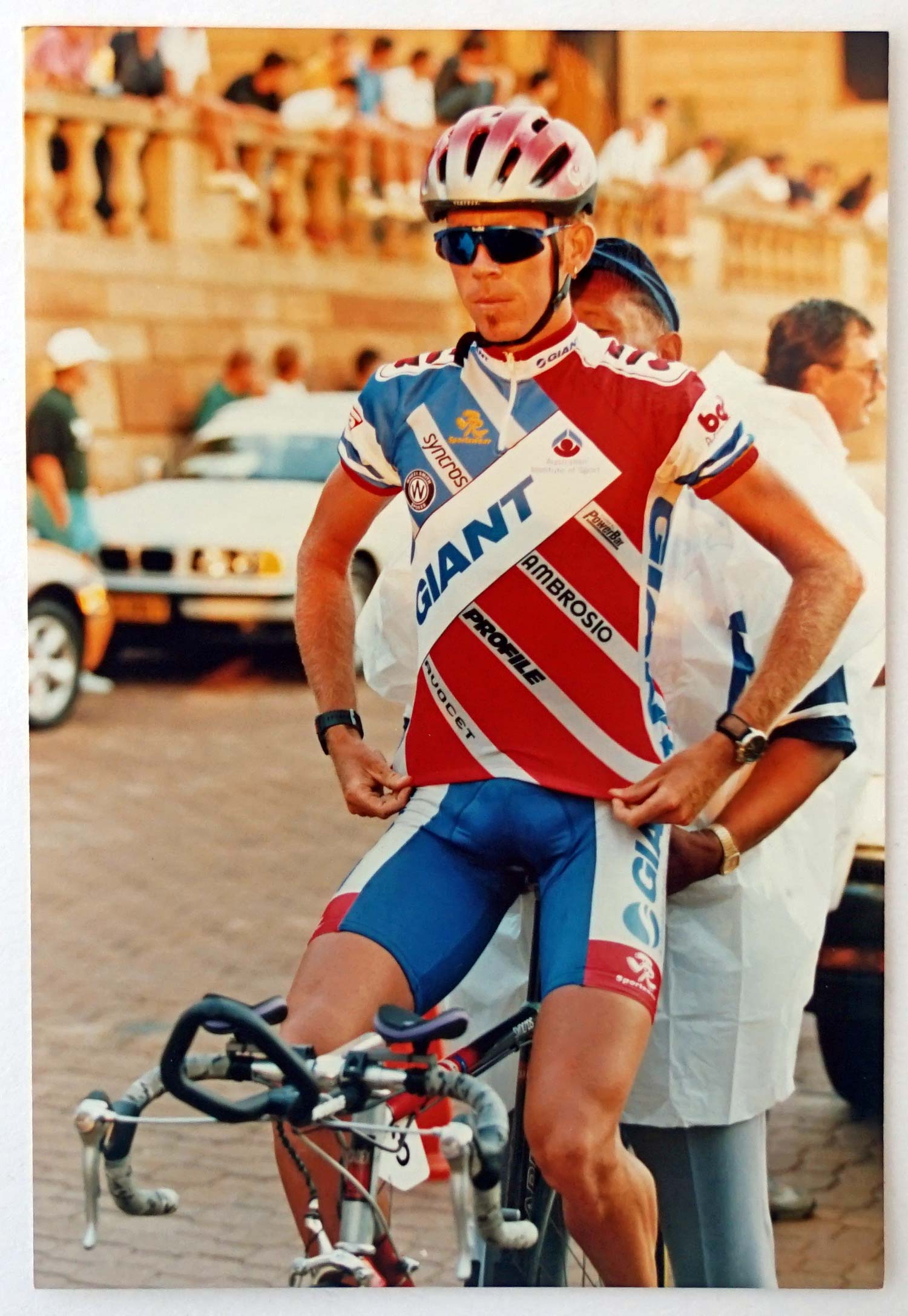 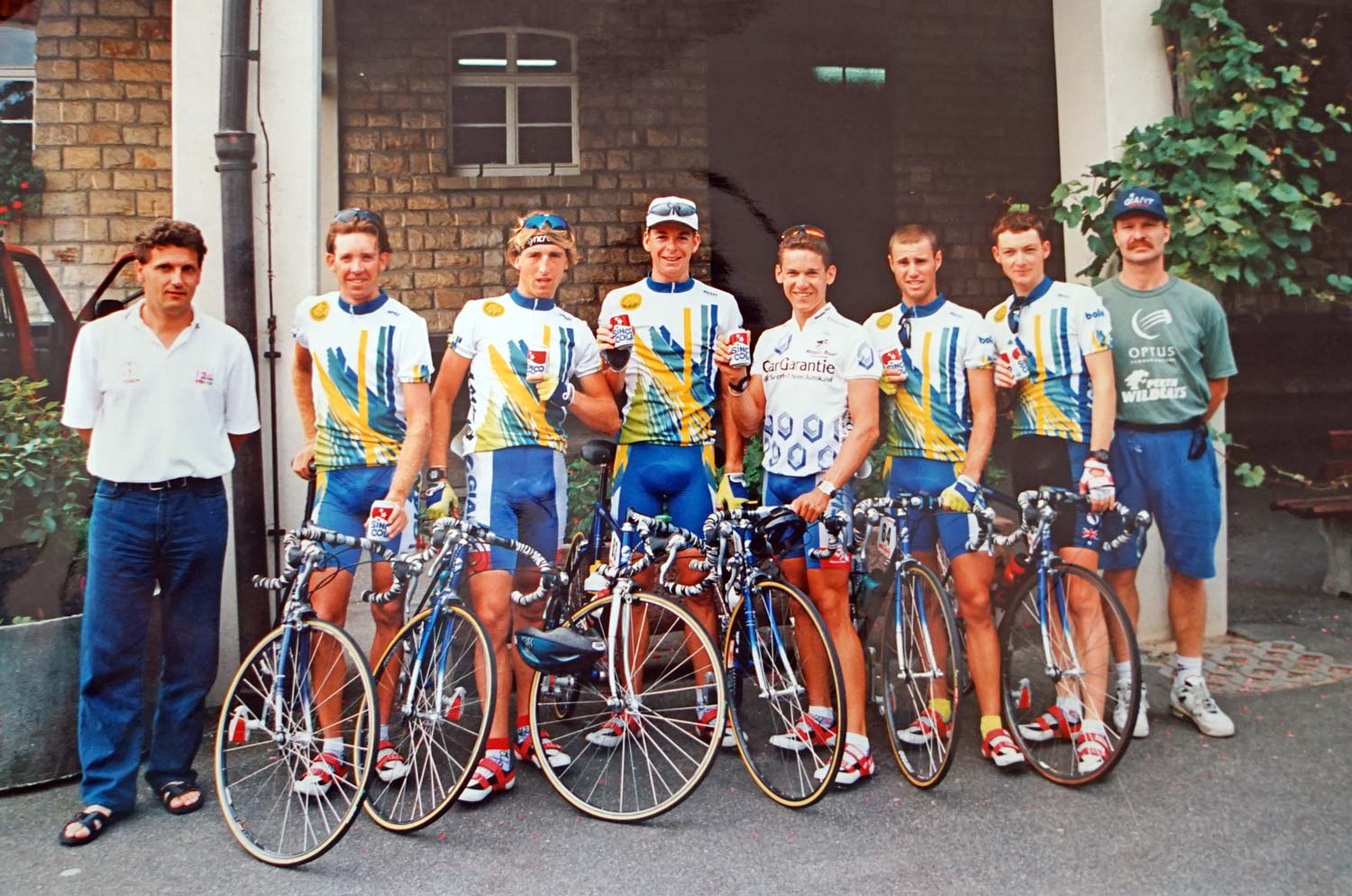 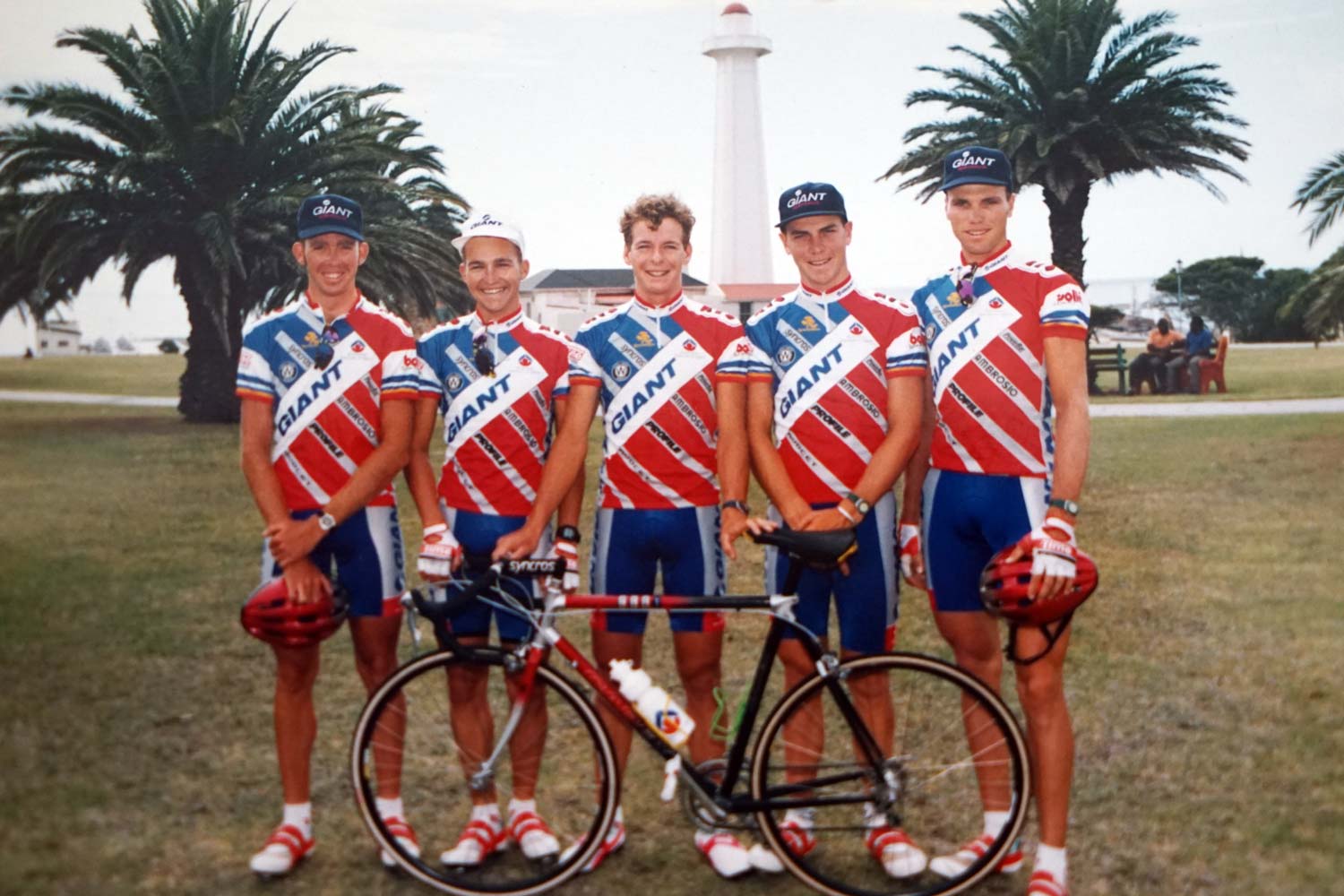 (If you have any thoughts you’d like to share about your memories of Brett Dennis, please send an email.)