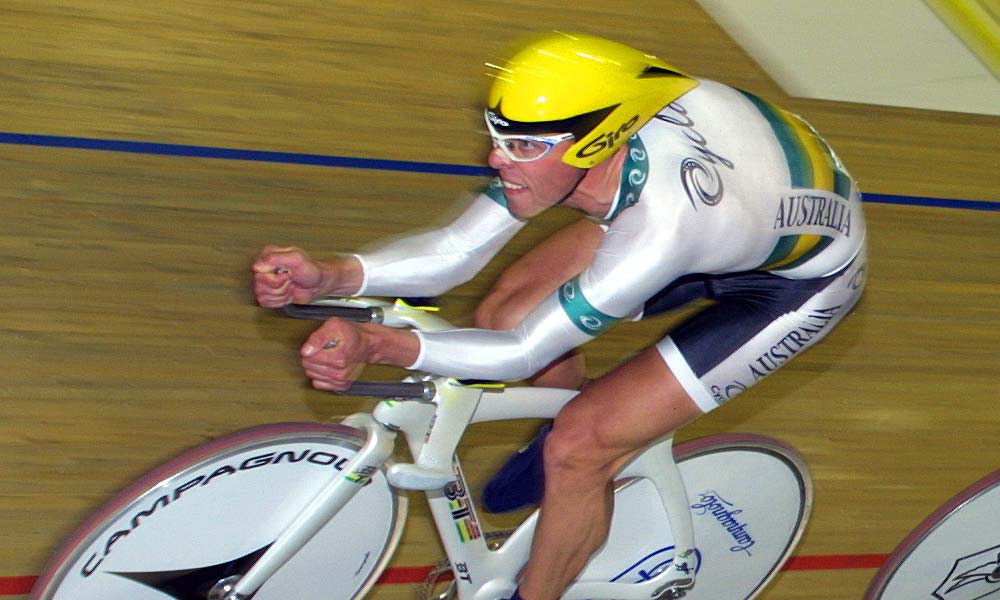 Sad news has hit the Australian cycling community. Steve Wooldridge, a stalwart of the racing scene for many years, is no longer with us. We take a moment to remember a champion rider and a mate of many.

In no time at all, the influence of Steve Wooldridge on generations of riders and fans was apparent. The news was delivered to many late on Monday 14 August 2017. Details would emerge and the sadness became overwhelming.

Friends and associates of Wooldridge spent the evening consoling each other after receiving the call that, this time, it wasn’t “all good”.

For years that’s what he’d report to the usual salutation: how are you?

His smile was like a beacon. And he could fool us into believing it.

We’ll update this page in the coming days and we encourage people to share their thoughts on a person who impacted the lives of many.

For now, we’ll let one of Wooldridge’s good friends and mentors, Phill Bates, get things started with his quick commentary soon after he received the news.

In your lifetime you give support, encouragement and the opportunity for young cyclists to reach their goal. In our sport of cycling, you see some conquer with lesser effort than others. Then you witness those that continue to work harder and reach even greater heights.

Steve Wooldridge, started racing with the St George Club as a youngster and continued to improve, especially under the guidance of NSW coach Gary Sutton. Steve, despite losing his mum Jan to cancer in 2002, went on to win Commonwealth gold medal and the first of four world titles in the teams pursuit. In amongst the four world titles was the gold medal at the Athens Olympic Games. More medals followed but he finished his career at the time, as our most successful teams pursuiter of all time.

Tragically today he gave his life away leaving behind a son and daughter, family and friends just short of his 40th birthday.

Steve achieved many cycling accolades, NSW Hall of fame but also a degree in engineering and was playing a pivotal role at UNSW. His infectious smile, gentleman attitude on and off the bike made him a very special person.

We are better for knowing him and worse off for losing him. 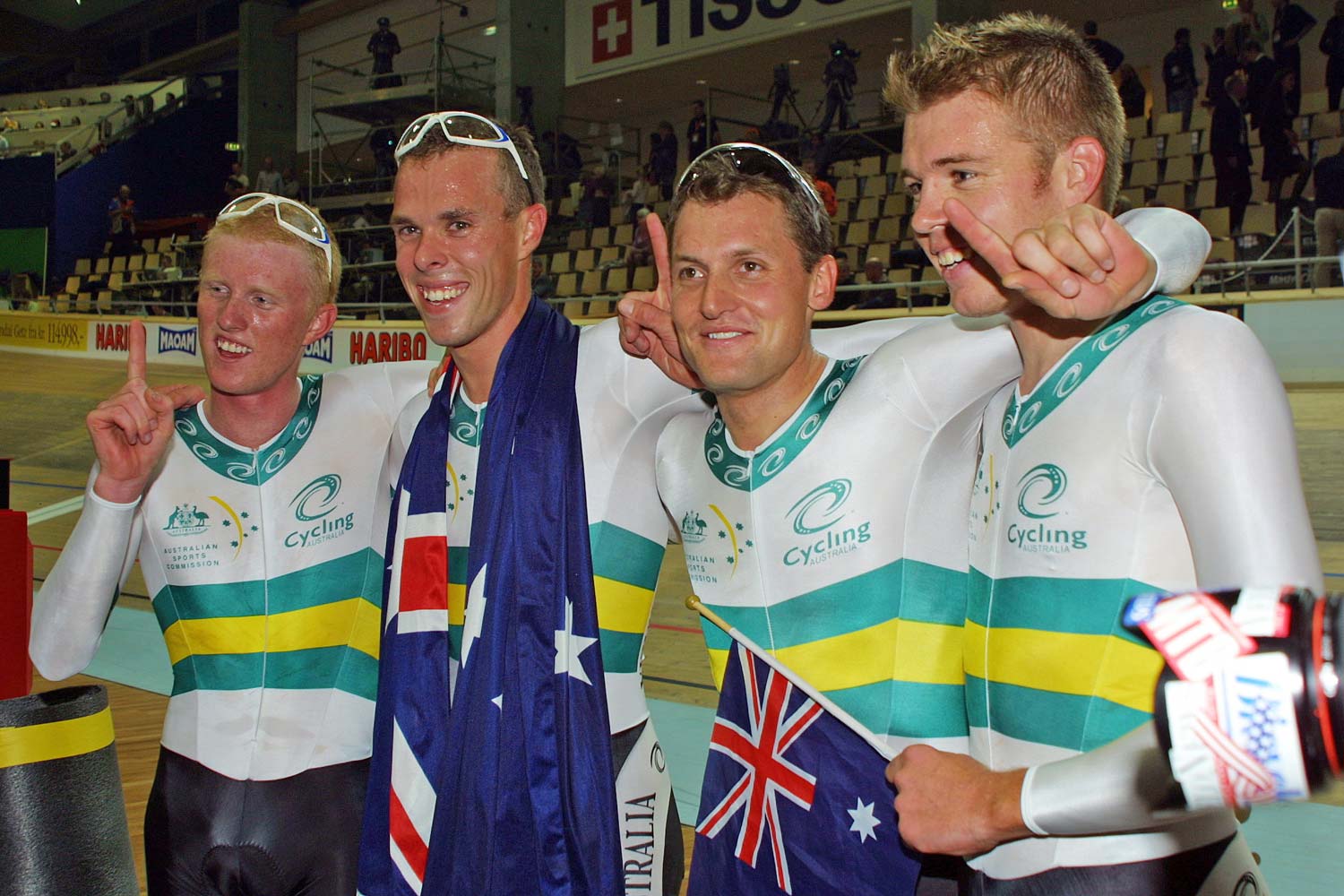 The last time I saw him he happened to wander into a bike shop where I was and it seemed so familiar and, despite the serendipity, he made it feel as though it was entirely orchestrated. “Good to see you.”

As Steve Wooldridge so often did, he asked about me and my family first. And then we started talking about cycling and old mates and, eventually, that fabulous reunion in Adelaide early in 2017.

Most things seemed to make ‘Big Steve’ smile. Underneath, most who knew him were also aware of his fragility. He never denied his emotions. They were on display often and he didn’t hide his weaknesses.

Wooldridge was a successful athlete but never the shining star that many of his peers became. He would win an Olympic gold medal, but not stand on the podium alongside Graeme Brown, Brett Lancaster, Brad McGee and Luke Roberts. (Nor would Peter Dawson, the sixth member of the team.)

Years later, he was able to joke about it; explain to some – even many who knew him well – that, “yes, I’ve got one too”.

Olympic gold is the driving force of some, a quest that’s built up into something bigger than what it really is. It’s a lure that dictates many things from humble training days in the rain to consideration in national budgets.

But to Big Steve, the medal was a coincidental element of a life with many other accomplishments. And he’ll be remembered more for his empathy as a friend, knowledge as a businessman, and qualities well beyond the velodrome.

“That fabulous reunion” in Adelaide was an evening to remember. Four blokes who won the national team pursuit title 20 years earlier, and their coach, were presented with special jerseys, created by a friend in honour of an amazing race.

In time we’ll encourage Drew Johnson to recount his story of why he hosted an event in honour of Wooldridge and his cohort from the NSW team of 1997. But the upshot is this: on equipment far from what we know today, using gears that seem laughable these days, this group of mates conjured a time that would have earned them Olympic gold only a few years earlier.

Wooldridge partnered up with Brent Dawson, Paul Dobson and Brad McGee. They listened to Gary Sutton (and, at times, duly ignored the coach). They would suit up and clip in and race the pursuit of their lives to win green and gold jerseys.

They were kids and they had guidance.

Sutton was like a father to them all and, on the night of the reunion, the coach arrived late – as he had just raced a bike for the first time in over 20 years. He did so in honour of a mate who had been diagnosed with MND. Gary Sutton and many others are thinking of Gary West as he battles his illness. After that charity event, ‘Sutto’ went to see some of his pupils.

And amidst it all Wooldridge sat and listened to the concerns of others. He also talked about his own battles. And at the end of it all, there was a group hug shared by a bunch of blokes who had grown up together – even if life took them away from each other most of the time.

‘Dobbo’ made a speech that night which was a joy to listen to. He evoked images of rebellion and triumph from their racing days. And Big Steve cheered as he listened. He’d laugh along with everyone and lift the spirit of all in the room.

He won’t do that again. He has left us too soon. And for all the fond memories that live on, the overwhelming sadness of his final decisions remind us that mental health is something we need to work on every day.

We laud the physical accomplishments of athletes but there’s more to life than winning medals or even conjuring brilliant yarns that can be told 20 years after the glory days.

Tears will flow for a long time yet and answers will be sought but right now we need to remember Big Steve in an appropriate way; good and bad were major parts of his life. And as we look to a future without him, let’s be wary of fragility and ensure that friendships last well after anyone steps down from a podium. 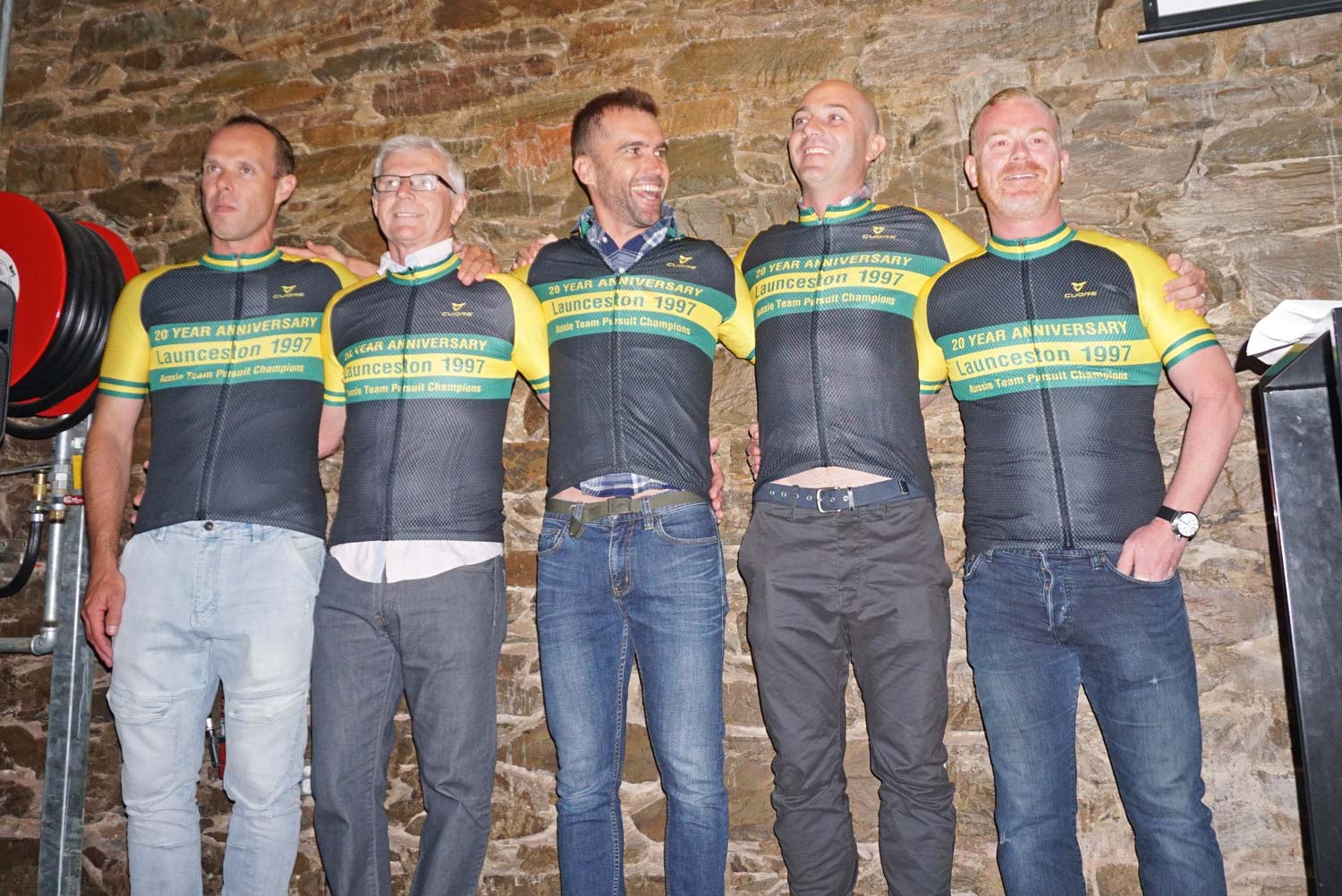 Comments from a team-mate

‘Big Steve’ Wooldridge – an infectious smile, a consummate gentleman and always genuinely interested in others and what they had to share.

It is hard to find all these qualities in one person, but Steve was all these things and more.

It is even harder to find the words to describe my sadness of his passing.

We met inside a velodrome when I was 17 and little did I know that this was the beginning of a lifetime of experiences and memories we would share together. Over a period of six years we became each other’s family given that we spent more time riding the world and living together than we did with our own loved ones.

Riding for your country and sharing in the highs of success, as well as the knocks and blows that are part of cycling, we develop an indescribable bond.

He was a champion who would go about his business with no fuss and with admirable humility. In doing so he become a stalwart of the Australian team pursuit squad, in what is undoubtedly the nation’s most successful era.

He achieved more on the track than almost any other Australian by winning four world titles, Commonwealth Games gold and Olympic gold. This dedication continued into his professional life after cycling.

Steve was the type of person you only had to meet once and his smile would extend his genuine interest in the introduction. He made a point of getting to know and remember the people that life’s journey brought his way. This gentle and friendly man is what more than just the Australian cycling community is mourning the loss of. 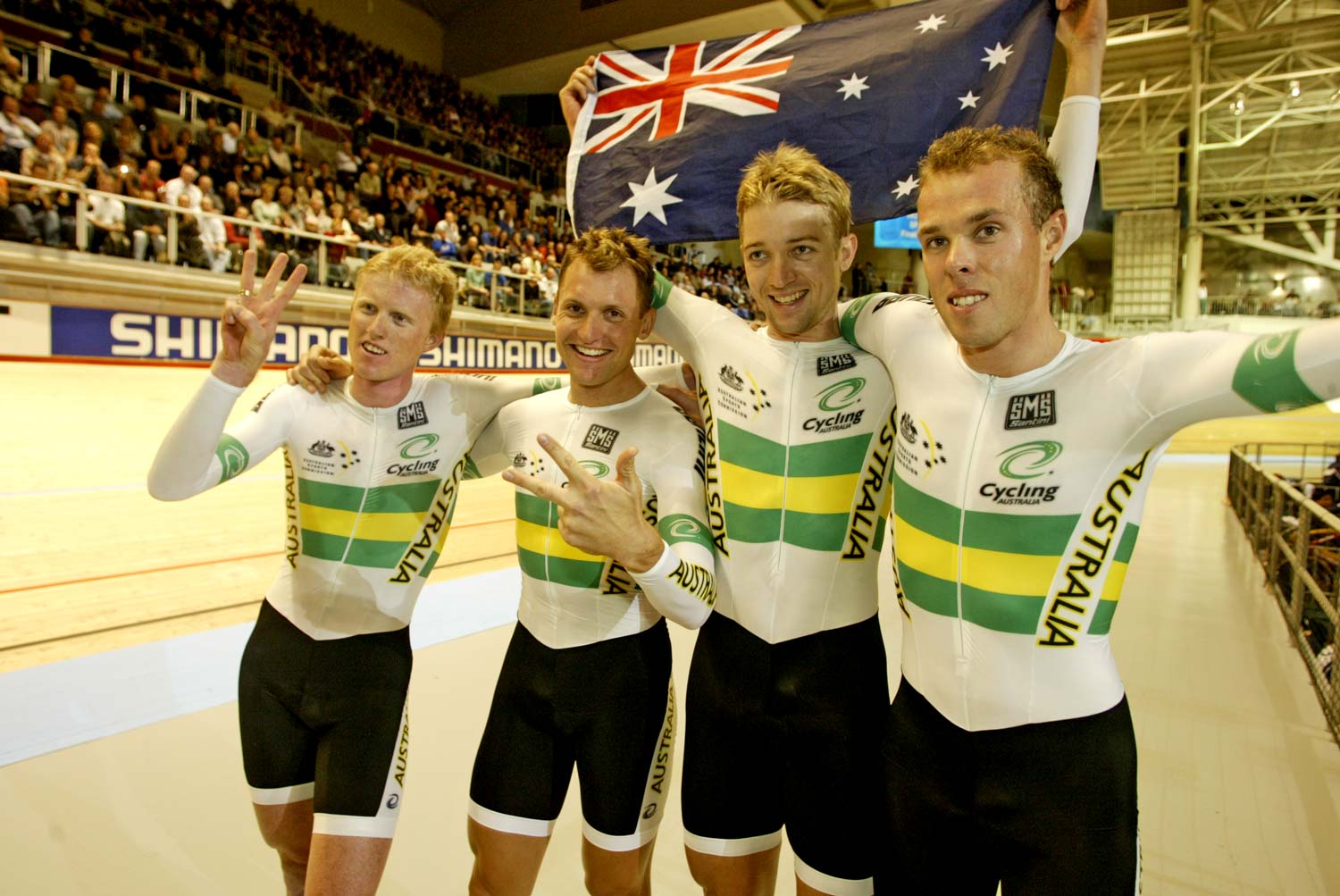 One of Wooldridge’s four world titles came in 2004 on the velodrome in Melbourne (above).

*Mental health issues are not uncommon, not a sign of weakness, and not something we can all just ‘get over’. If this article has raised some issues or concerns for you, please consider talking to someone and getting some assistance.