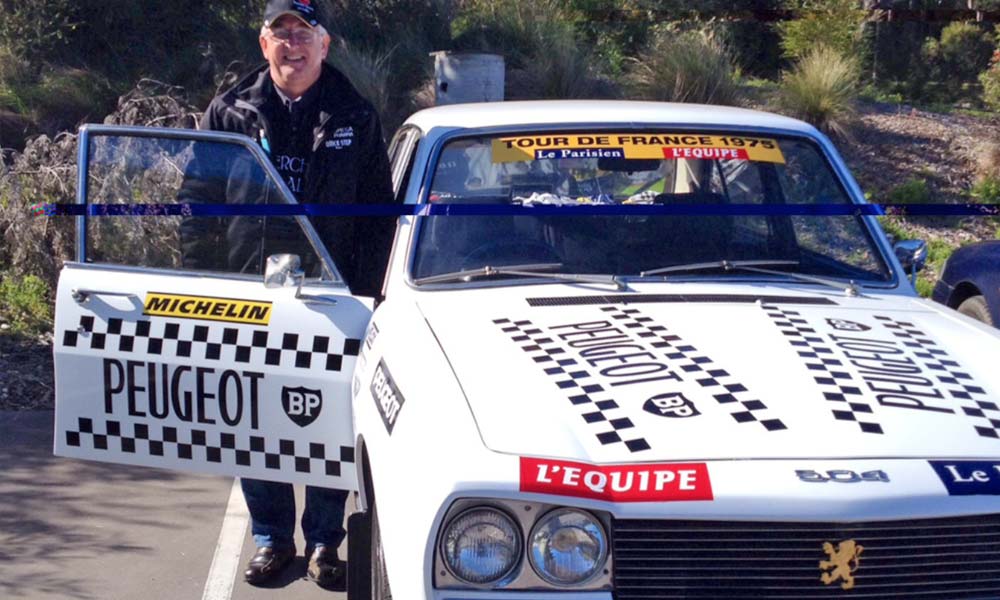 Cycling can prompt people to consider curious projects. Nostalgia for cars from their youth prompted Mike O’Reilly and Rod Cornish to turn a Peugeot 504 into a team car.

The original infatuation with old classic Peugeot cars started when Stephen Dixon and myself went around the NSW country Christmas track carnivals in an old Peugeot 403 in the early 1970s. We used to camp out beside the local country velodromes around our state like Dubbo, Tamworth, Grafton or Bathurst and jump back into the 403 and then drive to the next country velodrome.

It was real Thelma and Louise stuff, only without Thelma or Louise or Brad Pitt or the fateful ending.

Actually, the only bit that was like the movie was that we drove a car.

They had their 1966 Ford Thunderbird, Stephen and I had the Peugeot 403.

According to the movie poster: “Somebody said get a life… so they did”. It was a little like that for us, so perhaps there is another connection. We raced our bikes. We drove a car. We enjoyed the summer. And we had some diversity in a schedule that was repeated a few years in succession.

One year we even took along a tandem bike and we raced it in events at the various track carnivals. Ever since then I desperately wanted to buy an old Peugeot. And so the 404 came into my life. It was blue and nicknamed ‘Herve’.

Like any restoration project the main one actually began with another car. Herve the 404. Seven years ago I bought Herve the lovely 404 with a view to turning it into a replica 1970 Tour de France team car. 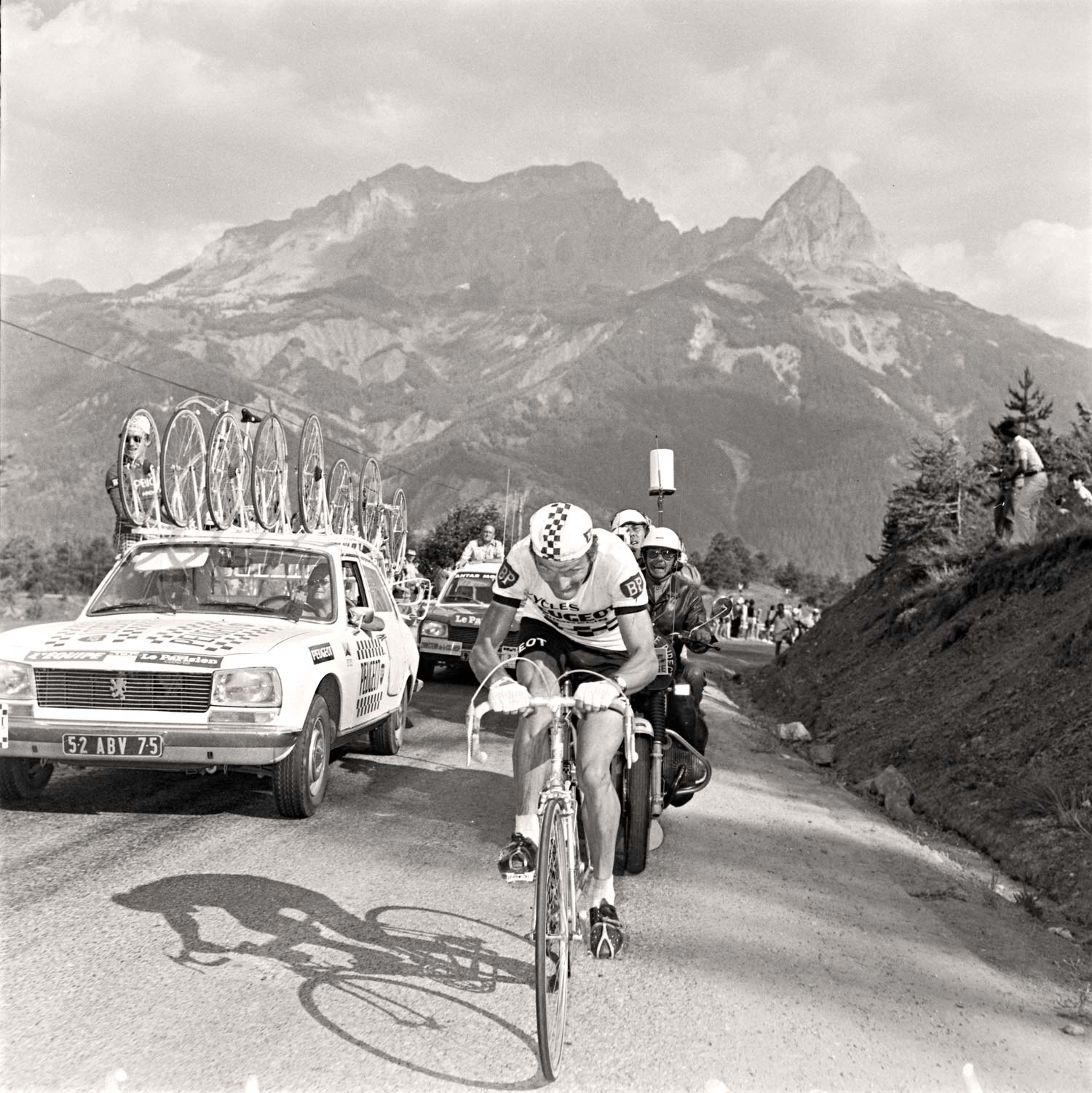 Bernard Thévénet and the Peugeot team car that ‘Bernard’ was modelled on, pictured here during the 1975 Tour de France.

There were a few concerns. ‘Period correct’ wasn’t exactly an option but the seed of an idea had been planted. It was actually manufactured in 1975 in South Africa and somehow made it to a farm in Dural near Sydney. The purchase was easy as it was – and still is – a delightful car.

Being a total Merckx fanatic how to proceeed was an easy choice… I knew what I wanted to do: cover Herve in Faema decals and make it a Merckx/Tour tribute car.

Eddy, I told myself, would be proud.

A problem arose when my wife Cleo intervened: she loved the classic French blue colour and wouldn’t allow the Faema conversion to go ahead. The project stopped dead without a single decal being applied. A lovely blue 404 but no 1970 Tour de France and poor Eddy put on hold.

But it wasn’t over. There’d be more cars.

Next up was a Peugeot 504, a white one we nicknamed ‘Bernard’. Stephen Dixon sourced Bernard the 504 some two years ago and I confess to not being sure it was a good idea. But sure enough, it was love at first sight and the purchase was made. I became the proud owner of a 1973 504 sedan that was a curious off-white.

These days you may call it ‘blonde’ or even ‘a sandy colour’, but let’s be frank: it was beige. It was a product of the 1970s after all.

He was mine but Bernard needed a lot of work before he could hit the roads. Everywhere we looked was another thing that needed fixing.

Stephen and I worked on the car for months and sorted out the panel work, the gearbox, the complete interior, the carpet. The list of bits to be fixed seemed endless. Old cars, we learned, can break your mind and I owe many thanks to Glenn Vagg, an old Peugeot master mechanic in Ballarat, for his support and encouragement.

As Bernard’s mechanicals were eventually sorted out it was time to think about what to do with him from a “cycling perspective”.

Rod Comish, a BiciSport Cycling Club team-mate, came up with the idea of picking a year of the Tour de France and sticking with it: we needed a theme, a strategy, some motivation… an excuse to tinker. “Okay,” said Rod, “lets go with 1975.” So it would be. A Frenchman, Bernard Thévénet, won in 1975, his team was French and its name was Peugeot. How convenient! Let’s do it.

Rod had a collection of old French cycling magazines going back to the 1950s and we went through endless boxes trying to get highly detailed pictures of each 504 car panel for a 1975 Peugeot team car. International CycleSport was a great source of information and inspiration. Finally, after some six months of going through countless old magazines (and some help from Google) we knew what we had to do with each panel of the car. It was time to add some bling.

The conversion began. Bernard would become a team car, a replica at least.

Compared to sorting out the mechanicals of a 504 gearbox the final conversion to a 1975 Peugeot team car was much easier than anticipated.

JMR Creative Design in Sydney did the all the decal files from the various source materials we had supplied. They didn’t need to be too creative, we had been thorough and the source material was very good. It was crucial to get the decal fonts and placement as accurate as possible.

The trouble was the car itself was beige. It had to be white.

Enter our new friends from Pro Vinyl in Sydney.

It was going to be too expensive to repaint Bernard all white… so we agreed to clad the 504 completely in white and place the Peugeot team decals over the top of the vinyl sheets. It was no quick job and took approximately 10 days all up, they removed all the car trim, then did the decal placement and Bernard was good to go… well, all for the 1975 elements.

‘Retro Rules!’ That was our sentiment as we drove it out of the workshop and onto the road for the first time. But then the practicalities, or lack thereof, struck.

Driving Bernard the Peugeot 504 is a bit strange.

The first time over the Sydney Harbour was freaky and all I could think about was the car breaking down in the centre lane and causing grief. How do you explain all that Bernard represents to a young NRMA mechanic?

There was no need for panic. Bernard actually drives well; it cruises along nicely at 110km/h and has four wheel disc brakes (that is a plus in crazy Sydney traffic). Ah yes, the Peugeot cassette deck is a nice touch but it wouldn’t be the only extra that came my way because of the conversion.

Interestingly, the car has prompted a retro revival of sorts and it’s as though I’m now an ambassador for all things relating to 1975. Numerous people have donated gifts to what is fast becoming Sydney’s ‘Bernard Museum’ with various retro jerseys, Campagnolo components and some rather new (for 1975) Campagnolo wheels laced with Ghisallo wooden rims.

The final piece of 504 retro is the Peugeot PX-10 bike that now sits proudly on the roof.