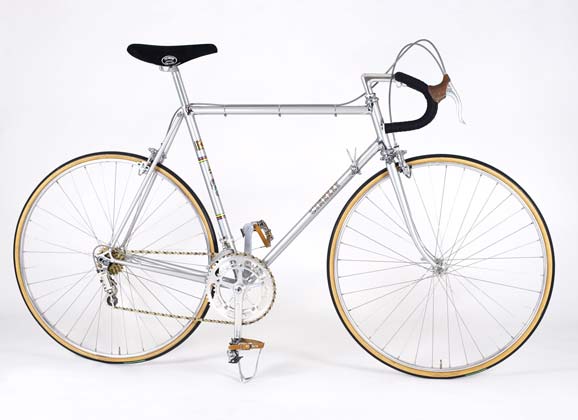 There will soon be a follow-up to a bike that has featured in a ‘Retro Review’ from a past issue of RIDE. And with this in mind, it’s time to present the online iteration of Andy White’s explanation of the creation of a particularly pretty Cinelli…

A pursuit of period correctness 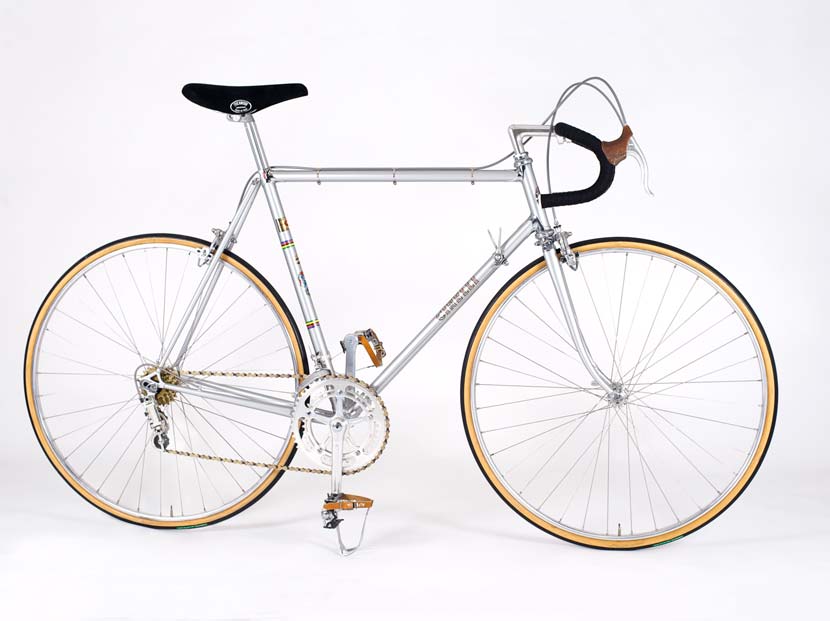 The client’s goal: “To build a classic steel frame”

The aim was to build a classic steel bike “with clean lines, and a simple palette”. It became more complex as the project went on. This is the story of building a beautiful Cinelli frame from 1972 with parts that are also 40 years old – but had never been used.

– Words and photos by Andy White* 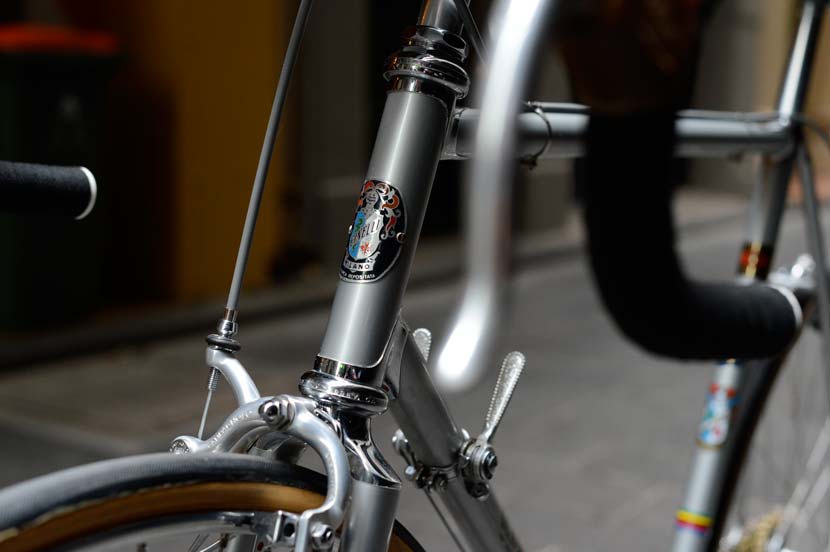 The completion of a bicycle project signals the beginning of the next – and with each project my personal goal is to achieve a better result than the previous one, if possible. This is the story of a most complicated, utterly satisfying build of a 1972 Cinelli. It wasn’t easy to adhere to all the requirements but it was worthwhile in the end. Projects can start with a photo, others a frame, sometimes the catalyst is as obscure as a single part which spawns a desire to build a bike around it. After recreating a duo of dazzling catalogue-correct Pinarello bikes for a client in Adelaide, there was a brief moment of reflection shortly followed by an email from the client’s friend: they wanted something similar, yet something very different. And the intention was to take the resultant bike abroad to Italy so that he could contest L’Eroica in 2013.

It was not so long ago that you could not buy a complete bike of this nature off the shop floor. It’s odd to think but these special projects highlight this fact. A bike was the sum of its parts, combined with the wheelset built to specification by an experienced mechanic. At the core of the initial brief was a custom-made frame with the perfect components.

From the initial point of contact all the client had formulated in their mind was a Campagnolo Super Record groupset, for “a classic steel frame of undecided make, with clean lines, and a simple palette”. It’s worth noting that the client had never ridden a classic steel bike previously and that included in his existing fleet of bikes was a BMC Pro Machine (coming in at a paltry 5.5kg), and his “heavy” bike – a 6.9kg Baum Corretto.  Coming from a weight weenie background, the thought of a period correct ‘light’ bike was thrown around and while it was an option, the ‘classic’ element might be sacrificed a little.

There are several rules on equipment that can be used for L’Eroica and it relates largely to age: anything made after 1987 is too new (no clipless pedals, no indexed shifting).

It’s possible to build a light bike for the prescribed era, but it involved the usual rigmarole of swapping steel for alloy and/or titanium, and drilling components to within an inch of their lives until they resemble a cheese grater. This was swiftly dismissed. 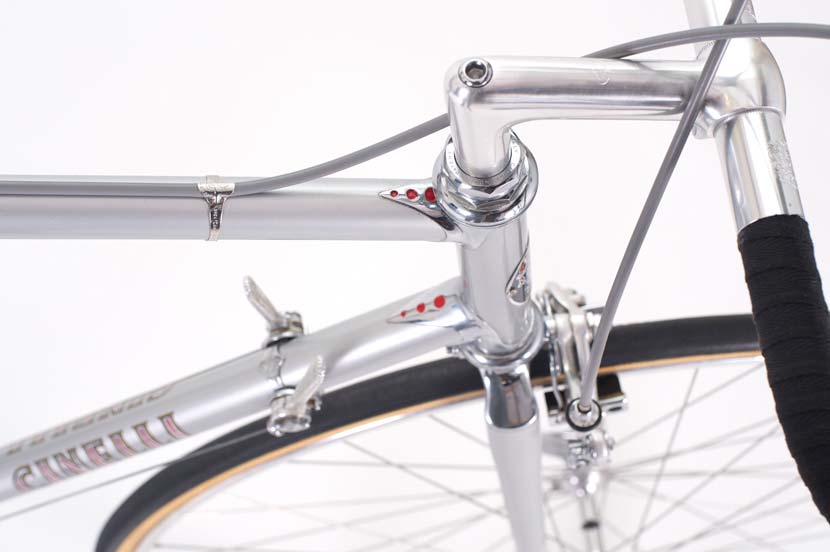 Cycling tragics, myself included, are drawn to certain marques and eras for many reasons, often personal.  The curve of the lugs, the design of the seatstays, the style of a font, the racers who won using them… or perhaps it’s simply a case of the era in which we were ‘kids’ and remember fondly.

It was in March 2011 that the introduction resulted in the acquisition of a NOS (new old stock) Super Record groupset, sourced from a bunker in Switzerland a month later. Friends in cycling had thrown around names of frames for the client’s consideration and two stuck: Zullo and Cinelli. The former are extremely rare and ridden notably by Robert Millar and Phil Anderson during their time with the TVM team. While Cinelli is a founding father of Italian cycling componentry and cast fittings for frames, Cino Cinelli never desired to industrialise his frame production, in part so as not to jeopardise component sales to other frame makers. This made Cinelli frames even more exclusive, particularly the Super Corsa which remains relatively unchanged since its inception in 1947.

I put the client in contact with one of the world’s prominent collectors of Cinelli. Greg Softley is a fanatic who is also known for his extensive library of reproduction decals, ‘Cyclomondo’.  Hours of phone discussion passed, and Softley recalled that he did have an unrequired 1972 Cinelli SC frame which, of major importance, was the correct size. A figure was agreed upon and the frame was sold with the condition it was given the respect it deserved. Super Record would not be appropriate for the frame, only Nuovo Record would do. 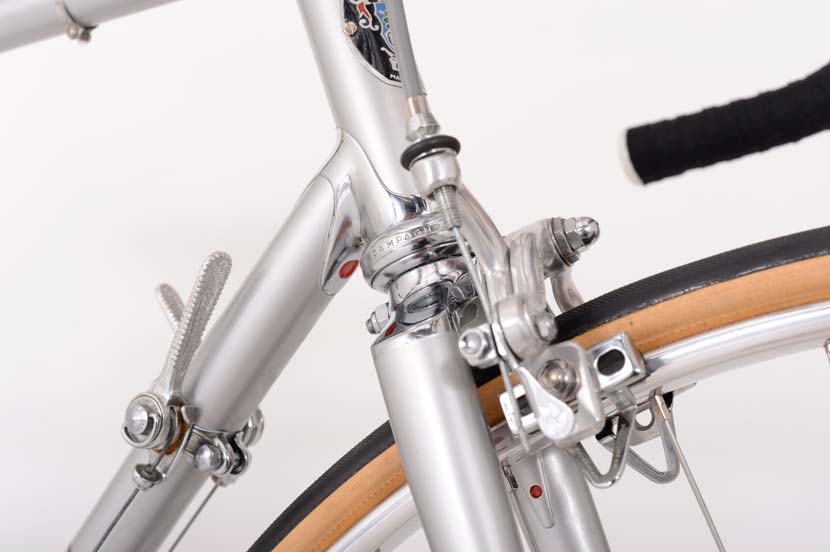 Within a day of the frame arriving it was forwarded to Peter Fleming of Star Enamellers, for complete restoration. In its crudely repainted state, a light sanding revealed that it had originally been silver in colour. The seat lugs which had been covered in paint were originally chromed and, once blasted, it was sent to Electroplating Technology for the chrome work.

During this time I’d sent some inspiration for the build to the client. One in particular was the period correct restoration of a Masi Gran Criterium by renowned US builder, Richard Sachs.  Period correctness is open to interpretation itself – it can be for a decade, a phase or, as was the case for the Cinelli, a year.

To me it seemed fitting that only new parts would be suitable, particularly given the level of finish the frame was undergoing; anything less would indicate a corner cut, a lack of patience and commitment to excellence. I used Sachs’ example as the standard, and secrectly I hoped to raise it along the way.

Another rationale for wanting items in top condition is that it would not be prone to failure while being ridden. Anyone who has had bars or cranks snap knows how important this is. Combine that with the smell that wafts out of box that hasn’t seen daylight in 40 years, and you’ve got something special. 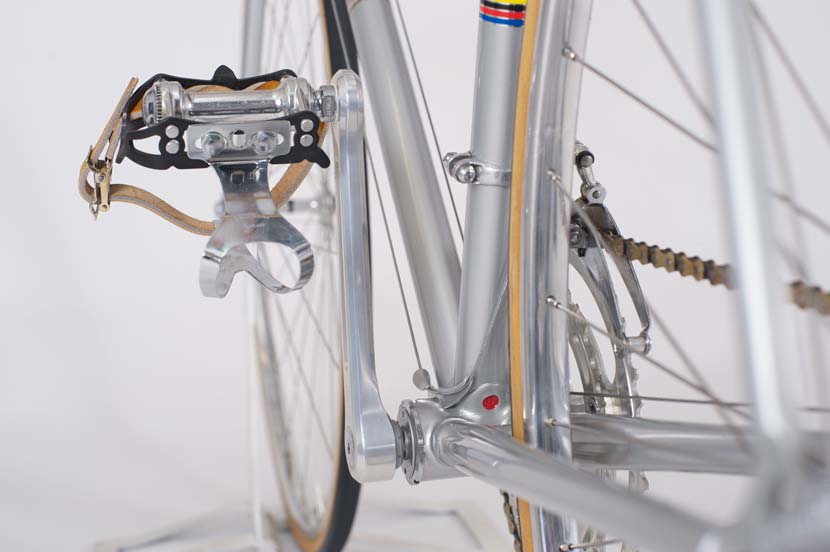 While parts were sourced from each continent, and the frame was undergoing cosmetic surgery, Softley worked on creating the missing Columbus decals that he did not have; they had to be printed on gold foil and correct to scale unlike the decals the frame came with. It is not only components that have come a long way since 1972. The paints used back then contained a much finer grain of metallic flake, not unlike the paint found on a Lamborghini Miura. The appropriate paint was sourced, and the lustre and wetness of the look was pared down to replicate the period.  The execution of the paint – including decal placement by Star Enamellers – is flawless.

In 1978 the Consumer Product Safety Commission (US) demanded changes to cycling components; for Campagnolo this included a number of modifications including a lip on the front derailleur, increase of spacing between the crank arm and spider by 2.5mm to accomodate it, longer BB spindle, curving of QR levers and ball end nut (previously conical),  a dome-end QR for the brake callipers, plastic tabs added to the brake shoes, plastic covers for derailleur screws and the word “Patent” replaced with “Brev” (Brevattato – Italian for patent). When it came to sourcing components which were listed online with little information, observations were made using the details above as a guide – but with each purchase came more and more variances in details; from font types, addition of circlips and (thanks to the online audience of velospotters who were giving their insight on the project) it became clear that a line had to be drawn somewhere where the project was a six-month window of time from 1972… but new remained the minimum requisite. 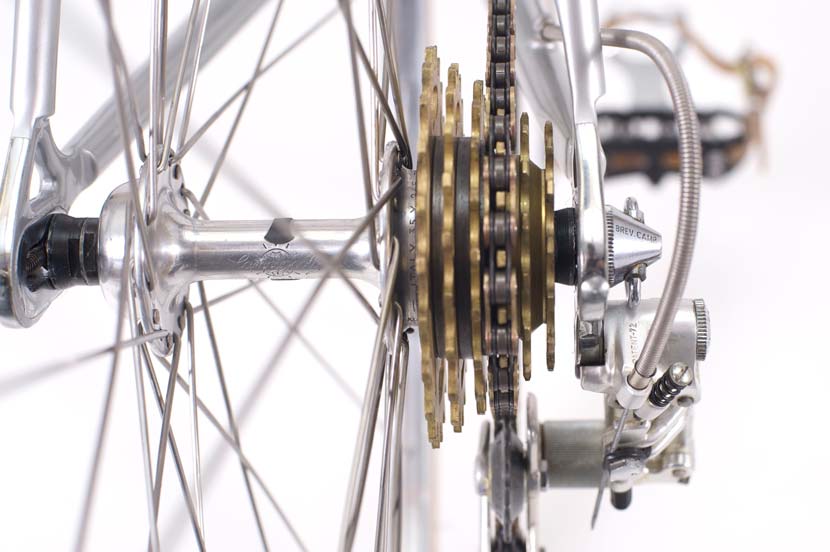 The client started trawling through his library of old RIDE magazines, but now with great interest in the Retro Reviews.  Warren Meade was contacted in the hope he could share his experience and knowledge, in particular on the brake levers.  As it turned out, Meade himself was stumped and learned something new about the mechanisms which, around that time, featured a small variance: a slot (not a hole) cable access, as well as the length and curve of the lever blade. The point of splitting hairs had been reached.

A major stumbling block was period spokes, for which Robergel Trois Etoiles were used. They came supplied with nipples and washers for the rims, but the 303mm spoke length was not correct for the 36h hubs. Cutting and rethreading the old spokes – which aren’t of amazing quality to begin with – became a highly involved and frustrating task for Dan Hale of Shifter Bikes, but one accomplished to perfection.

Hale also prepared the frame, assembled the complete bike, down to soldering cable ends, and some other deft touches reminiscent of the care an old-fashioned barber takes.

A preliminary only post of the final build returned the subjective opinions of velospotters/retro grouches who raised some valid points. The logo on the Christophe toeclips was post 1972, as were the plastic rollers on the Alfredo Binda straps: they should be steel.

The most frustrating part of these projects generally comes at the point when only one or two gaps remain to be filled.  This means when the correct part appears on the market, a bidding frenzy will ensue. The client was unaware of auction sniper style sites and bid live for all items, often at 2am to win the remaining pieces. Ironically, it was Richard Sachs who was clearing much of his accumulation of NOS 1970s parts at this time, and the rear derailleur was just one of the items on the bike from his stash. Later, negotiations took place directly with Sachs for the correct Christophe toeclips and forwarded directly to my mailbox to expedite the project.

Prior to assembly, the client had two visions in his mind for the end result: it could become a show bike, with all the period correct parts; and a rider version, where the chainrings, chain, freewheel, wheelset and tyres would be changed to suit. Once it came time to put the bike together it was obvious that this bike should never be ridden. It is a piece of art – a window into 1972 and truly the best available at the time.

Amazingly, even as I type out this story, the client has still not seen the bike in the flesh but delivery is imminent. He has enjoyed the project only through lengthy dialogues by phone, emails and imagery. In the 18 months that it has taken to complete, the client had amassed a box of spares for the ‘next’ project. A bike he can ride at L’Eroica 2013. 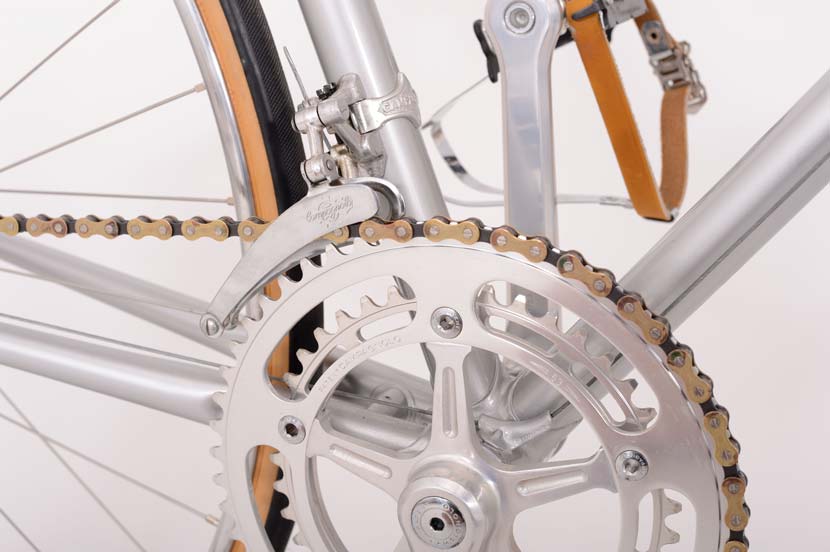 *Andy White is FYXO. Former globe-trotting bike courier, current cycling tragic. Responsible for the cult classic ‘Melburn Roobaix’ ride and many a fine bicycle. FYXO provides high quality, left of centre content on an irregular basis, and if you have the money, he consistently proves it can buy happiness.