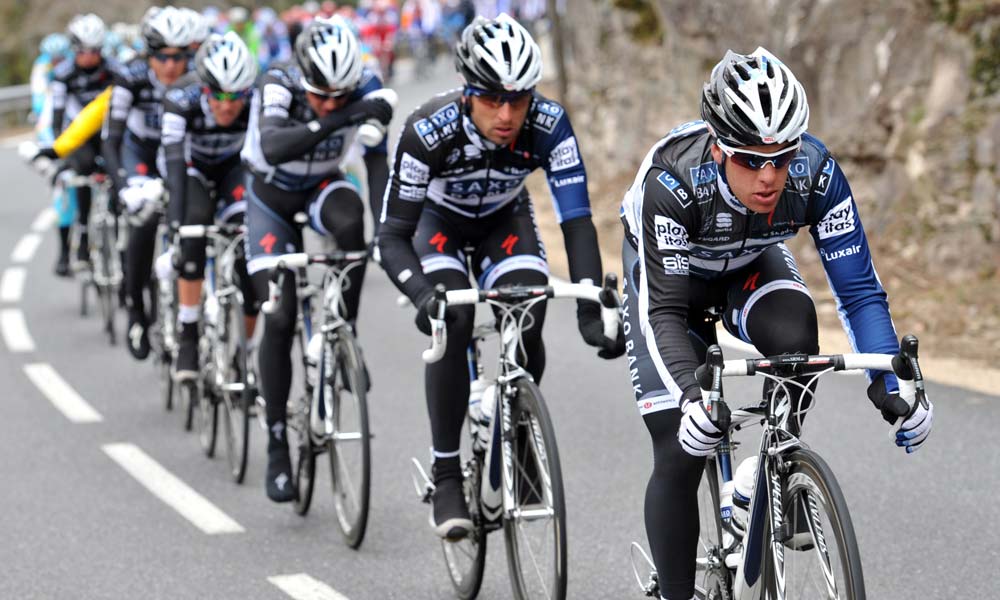 This is the first column by Richie Porte published by RIDE Media.

Induction of a pro cyclist

With some good results and a couple of doses of good luck, Richie Porte rode away from his job as a lifeguard at a pool in Tasmania and into a career with the Saxo Bank team. The 25-year-old explains the journey to his new position…

Surely most people have a dream job, something that they can aspire to even if they realise that the chance of getting the call-up is next to naught. For me, it was to be a professional cyclist. I’ve been very fortunate; the dream has become a reality. Late last year I signed a contract with Bjarne Riis but it took a while to come to terms with what that meant. It was there in writing: I would be part of a ProTour team. The terms had been agreed and all I had to do was stay fit, wait for the training camp and meet my new colleagues.

Still, it didn’t sink in until the day it was officially announced. I was at a mate’s place eating a rice cake with Vegemite while looking at Twitter. I glanced at a posting and there it was: “Richie Porte signs with Saxo Bank”. A simple sentence but that was when I realised the sacrifices I’d made were worth it.

My journey really started in 2007 when I moved to Italy to race as an amateur. I won my first race and felt confident that I had the ability to make a career out of cycling. I was a lot fatter than the typical Italian rider and the race was a hilly one, but I ended up riding away from everyone. It was a good omen; the result turned a few heads. It was a defining moment for me.

I’ve always been an active person. I used to do triathlon. I’ve also been a pool lifeguard and that was what I was doing before I took up my dream job. I did my last triathlon in 2006 and raced a few cycling events in Australia in 2007. Around the middle of the year I was talking to Josh Wilson whose father Michael had been a pro cyclist from 1982 to 1991 with teams like Alfa Lum, 7-Eleven and Ariostea.

Josh was in an Italian amateur team and they were a guy short. He asked if I wanted to come over. That was it. I quit my job at the pool and off I went to Italy.

The following year I moved to Monsummanese Bedogni Grassi, a team managed by Andrea Tafi based in the town where Brett Lancaster and his family live. Things were looking good until I had a nasty crash and fractured my hip, meaning I missed most of the season. I managed to get back into training and even win another race before heading home in time to race the Tour of Tasmania. It had been an interesting but tumultuous ride and I woke up one day and decided that was it for cycling; I wanted a nine-to-five job like everybody else!

It had been fun but was this the career for me? I wasn’t too sure about my future but thankfully I listened to some good advice and persisted. I was riding in Australia with the Praties team and the guys who run that, Andrew Christie-Johnston and Steve Price, told me to start the Tassie tour and see what happened on the road. So I did and ended up winning a stage and the overall title. That gave me the spark I needed to continue this journey. I went back to Italy in 2009 and picked up from where I left off: same team, same town, same training buddies… but a bit older and wiser. The goal was to find a team I could turn pro with at the end of the year. I went with some form and my team was willing to back me up at races.

The Baby Giro was back on the calendar and that was my main focus last year. This is a nine-stage amateur race in June. Marco Pantani, Gilberto Simoni and Danilo Di Luca all won it before turning pro with each going on to claim the maglia rosa of the real Giro d’Italia a few years later. There are years when it is not contested (like 2008) but it’s good for riders trying to make a name for themselves. When I got the chance to compete there was something significantly different to previous years: they actually had a lot of doping controls! I think that had been the problem with the race in years gone by. In 2009 there were nine stages and I was called up five times. It was clear that a big effort was being made to clean it up.

I missed a crucial breakaway; the strong guys marked each other and an escape got seven minutes up the road. That was it for GC, but I’d done a lot of time trial training. Brett Lancaster and I would go out almost every day on the TT bike and do efforts. So, with GC gone, I turned my attention to the fourth stage. I beat the under-23 world champion Adriano Malori – touched him up by 0.01 of a second over 23.5km.

Fast forward five months from the Baby Giro and I found myself in the Canary Islands, with a new bike and team outfit as part of Saxo Bank’s famous pre-season gathering. The boot camp, everyone agreed, wasn’t as hard as past years. We did a lot of activities, most of them in the ocean. There was some boating and jet-skiing. We had a helicopter ride thrown in as well. I got off pretty lightly for my induction although we did get dropped two kilometres off the coast and were told that we had to swim back to shore as a team-building exercise.

Most of the exercises are based on creating a bond between team-mates but there were some competitive events, one of which was underwater swimming. There were a few guys in the team who couldn’t actually get their heads under water without feeling uncomfortable. I just stayed at the back of the group, checking out who had some swimming form and who didn’t.

Jens Voigt and Frank Hoj did well: they went underwater for one whole lap, 50 metres. I was thinking, ‘Nah, I’ve got you guys covered’. So I opted to go off last. It was in an Olympic-sized pool and I did one lap underwater, turned around and came back to near the halfway mark. I swam 72 metres underwater which earned me a new nickname of ‘Fish’.

That was a nice way to start my association with the team. I had Bjarne Riis and Fabian Cancellara there to help me out of the pool and slap me on the back and give me some praise.

When I was young we had a holiday house on the east coast of Tassie and we used to do a lot of surfing there. It’s funny, because I never really enjoyed surfing too much. I prefer to ride my bike. And that’s what I’m now paid to do. It’s early days but I feel appreciated and I’m looking forward to 2010. From what I’ve come from to this – a team where nothing is a problem – is great. It feels like I’ve really achieved something just by being part of a training camp with a team like this.

Fränk Schleck is the big star I gelled with the most. It was a simple thing: one day we rode together up a mountain to simulate a race and he said to me, ‘You’re a good bike rider’. It meant so much to me, a neo-pro, that a guy like him would give me the time of day. Now he’s become a friend.

Finding the right job does take some effort. If the dream one comes along, then it’s only right you relish that chance. I grew up in a family that would go to the beach often. Dad tried to make my brothers and me go surfing and I was just always more interested in going riding. For me, the ultimate job is a professional cyclist. With the induction over, it’s time to deliver. I’m down for the Giro this year. What an opportunity! I want to go there, have a good ride, do my job and try to finish. There are not a lot of teams that give young riders a race like that in which to develop. I can’t wait! I know it’s going to hurt, and it doesn’t help reading those articles where some appraise it to be the hardest Giro ever… but it’s part of a great job.