With 17 stages of the 2020 Tour de France completed, Australia’s GC hope Richie Porte is just 99 seconds shy of a podium place. Between the Col de la Loze and Paris lies ideal terrain for the Tasmanian… but is it enough for him to crack the Slovenian domination? 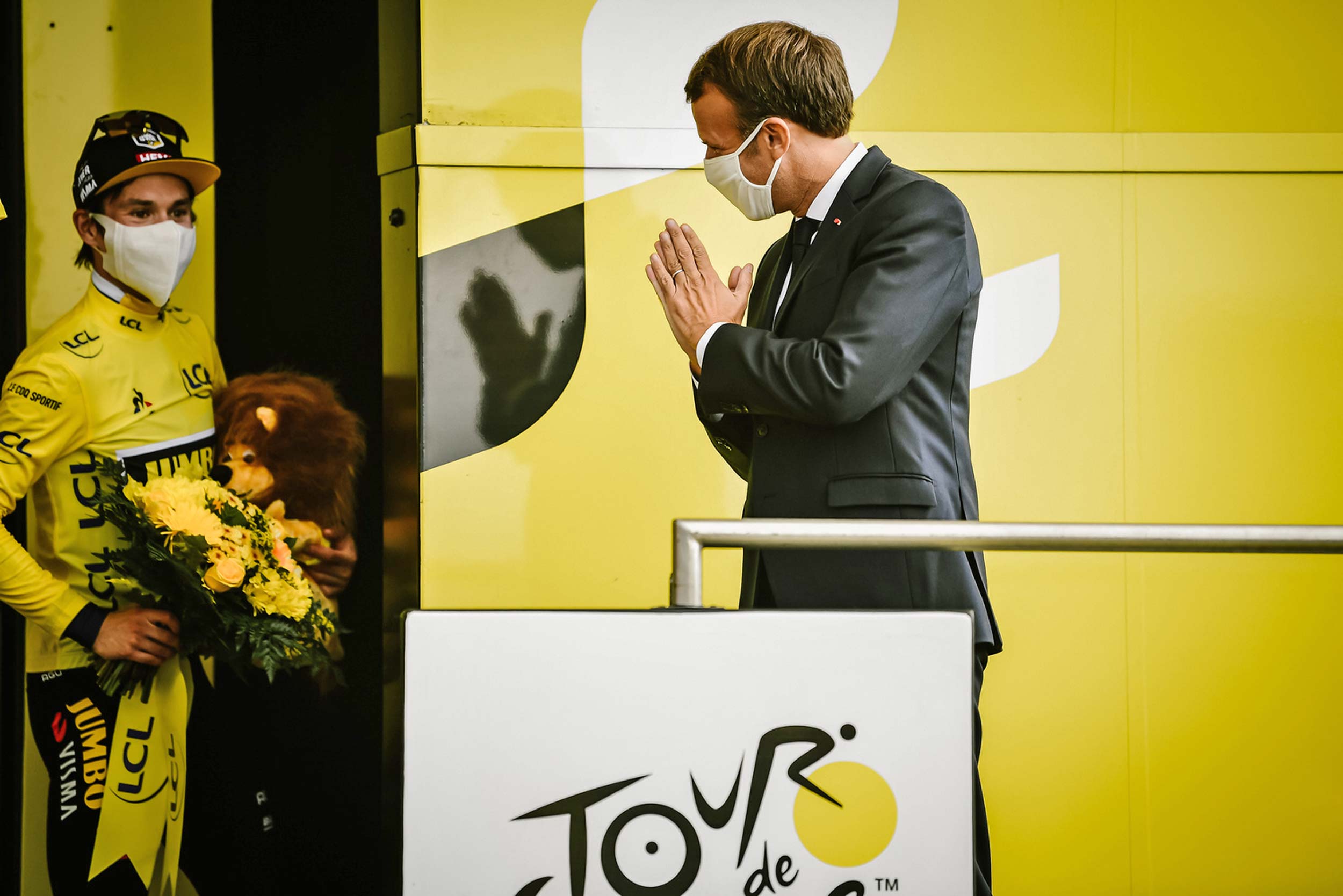 A dominant leader… and the President of the Republic, Roglic and Macron on the podium after stage 17. (Photo: Pauline Ballet, ASO)

You know the rankings and how the order was established but we’ll do a quick review after the Queen Stage. Primoz Roglic sits in prime position – in the yellow jersey for nine days, with one stage win to his credit, and surrounded by a team of champions. 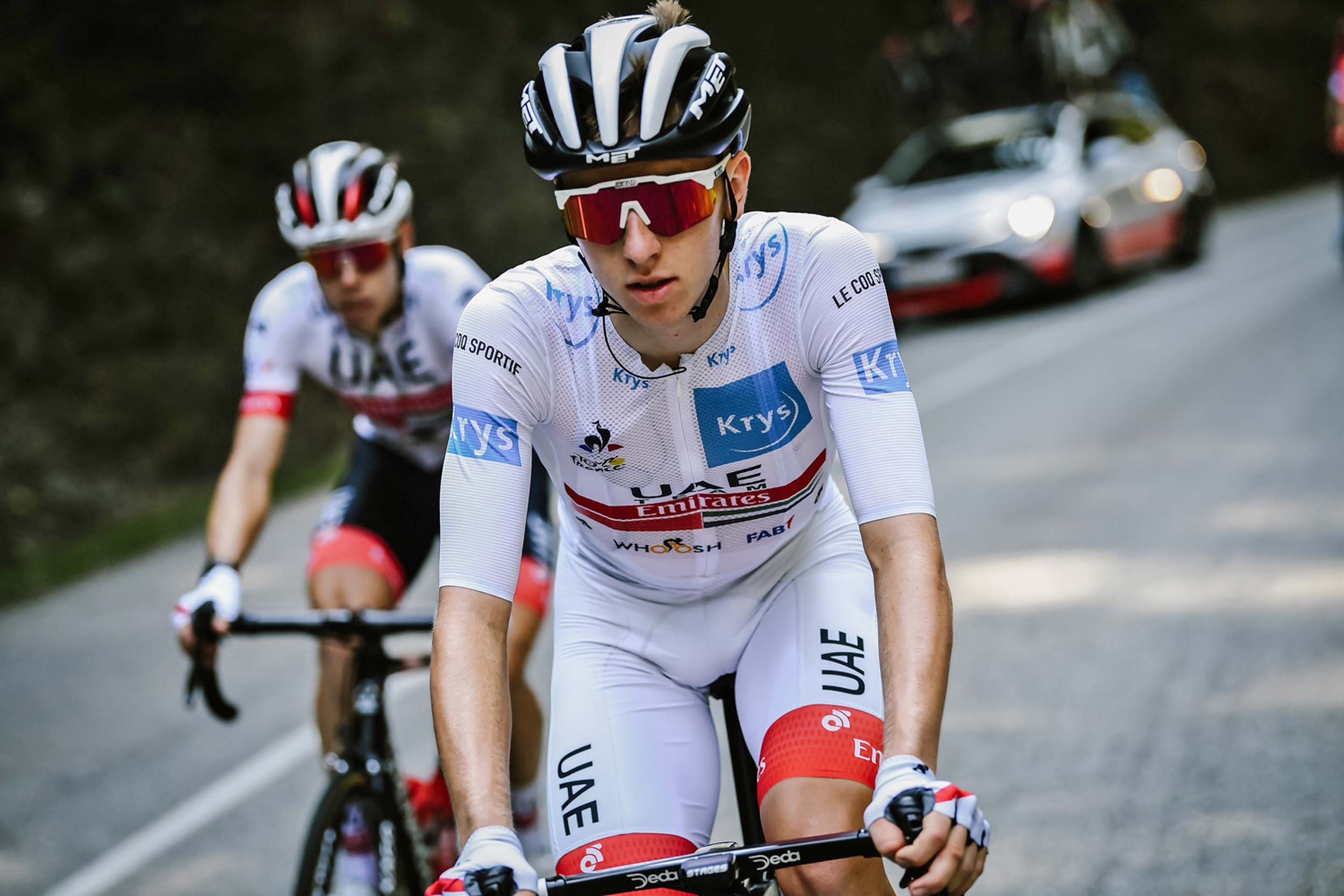 Pogacar has worn the white jersey for 8 days during his debut Tour. With his 3rd place in stage 17, he also took the lead in the climbing classification. (Photo: Pauline Ballet, ASO)

Tadej Pogacar is in second place, 57 seconds behind his Slovenian compatriot, with two stage wins, a strong lead in the youth classification, and now a polka-dot prize jersey for his collection. He’s just 21 but Pogacar established himself as the most serious challenger to the 30-year-old who has led the Tour since the pair finished first and second in Laruns in stage nine. 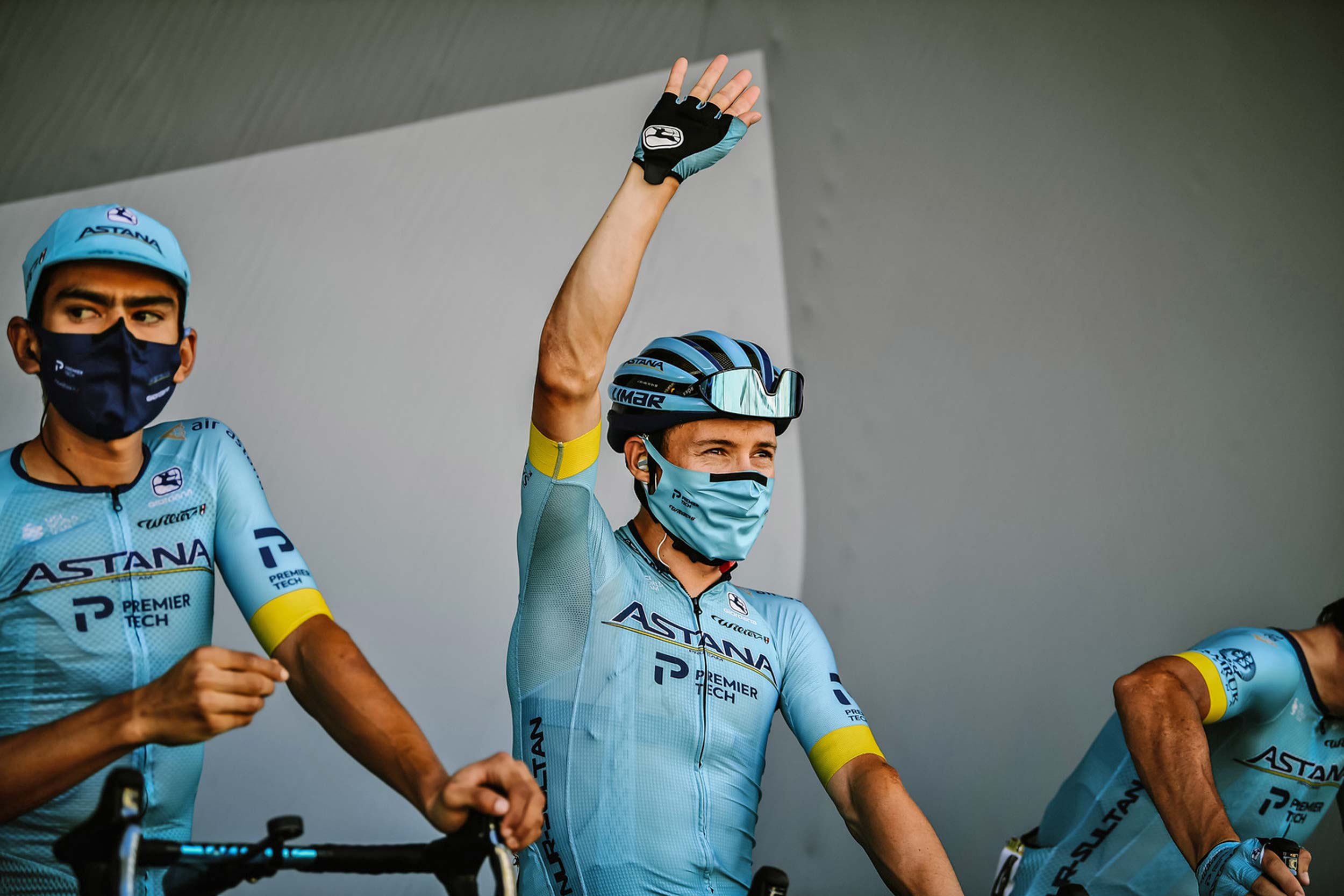 Miguel Angel Lopez, a Colombian Tour debutant in 2020 and stage winner at the highest point of the 107th Tour – the brutally steep Col de la Loze – is now in third place. With his victory in stage 17, ‘Superman’ took the position on GC that Rigoberto Uran ceded after 16 stages.

And then there’s the Australian hope, Richie Porte, in fourth place overall after 2,982.5km of racing. Rising up from sixth on GC with his fifth place in stage 17, the 35-year-old seems to be in the best form of his life and the podium of the Tour de France is within reach. 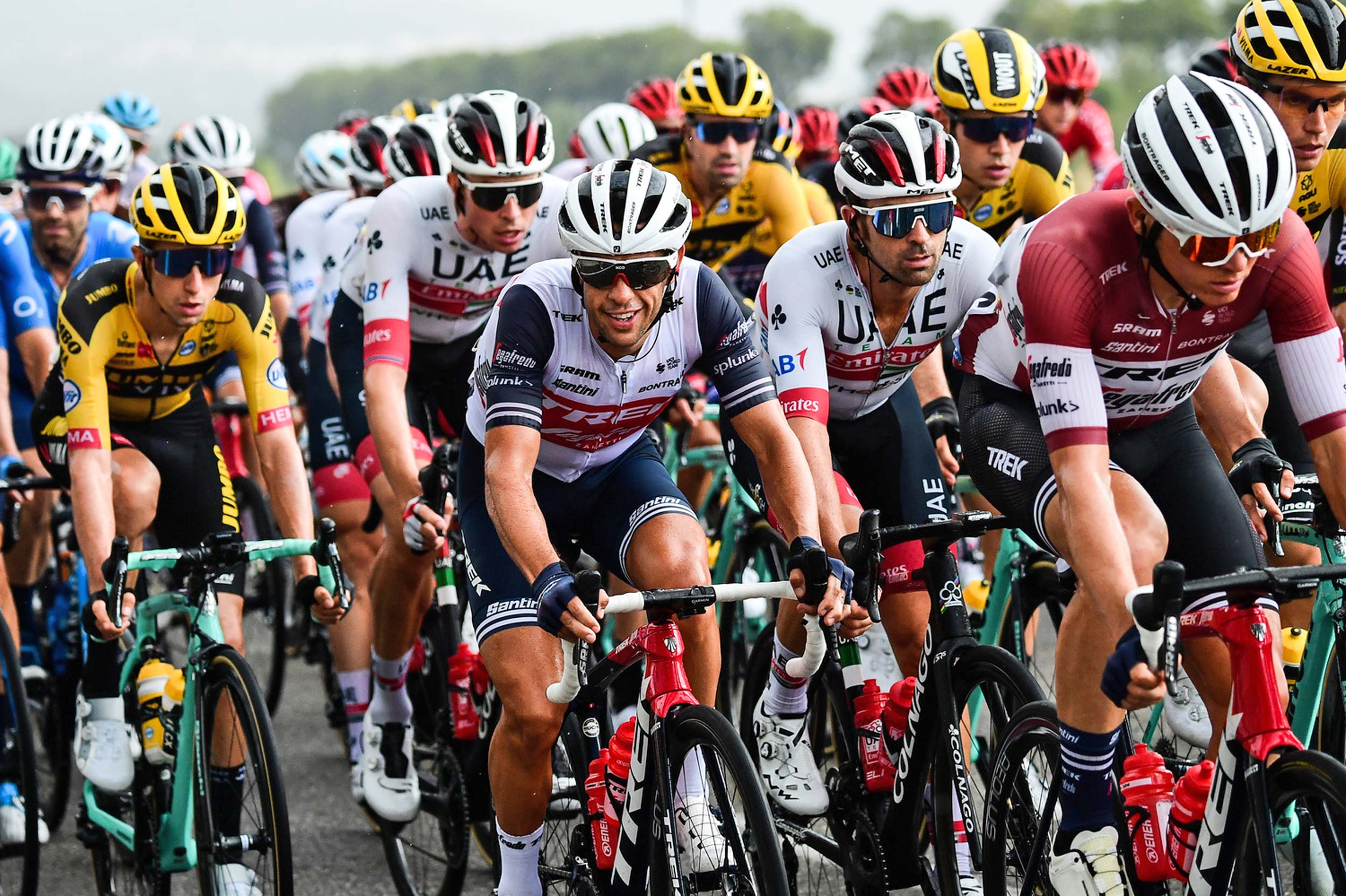 For 10 years Richie Porte has been making a name for himself in the world’s biggest bike races. He stands a chance of becoming the second Australian to stand on the GC podium of Le Tour and he’s racing with confidence, giving his fans every reason to cheer.

“I wasn’t too sure about my future,” he wrote in a column for RIDE Media in 2010, “but thankfully I listened to some good advice and persisted.” 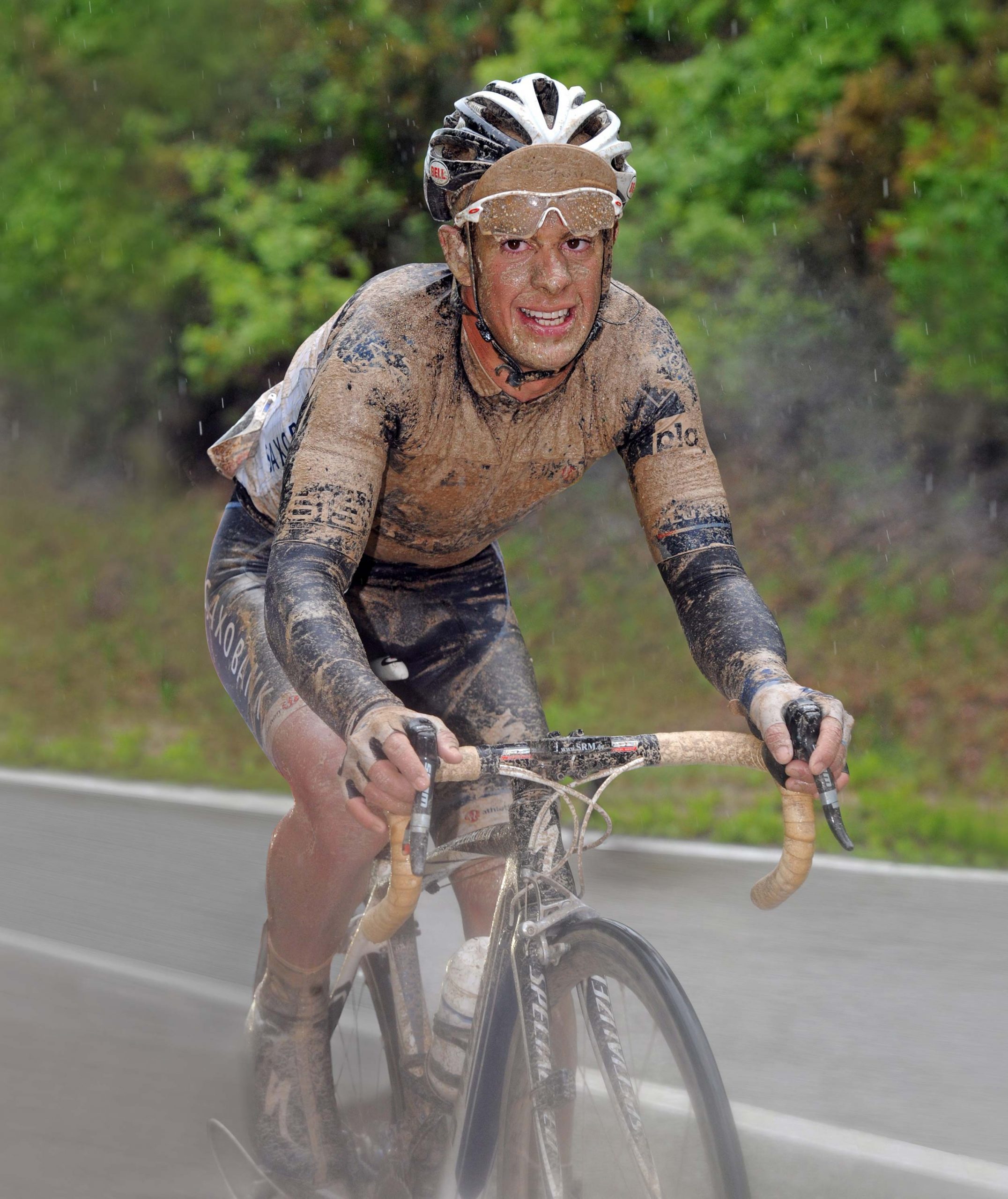 There’s over 10 years between the two images above – Richie Porte at the Tour in 2020 and the Giro of 2010, respectively. He has been a constant performer since making his Grand Tour debut over a decade ago. Now, with four days to go in the Tour, he’s poised for a podium place… if only he can make up the 99-second gap to 3rd place after 17 stages. (Photo: Graham Watson)

Fourth on GC after 17 stages of the Tour de France is a long way from the poolside chair he sat in as a lifeguard in Launceston. That was his job before pro cycling, and we’ve come to learn his story well over the last 10 years.

There was the Grand Tour debut in 2010 when he wore the maglia rosa for three days at the Giro d’Italia, finished 7th on GC and won the white jersey as best young rider.

Then came the succession of Tours de France.

He was 73rd overall on debut, riding in support of Alberto Contador while at the Saxo Bank team in 2011, the year Cadel Evans claimed victory.

In 2012 and 2013 he was alongside Wiggo and Froomey for their Tour victories, with Porte finishing 34th and 19th, respectively.

Leadership responsibilities fell his way in 2014 after Chris Froome crashed out in the opening week but illness hindered Porte and, although he was ranked as high as 2nd overall (for three days in the middle of the race), sickness slowed him down and he finished 23rd in Paris. The next year he returned to super-domestique duties and helped Froome to a second Tour title in three years; in 2015, he finished second in two stages – the team time trial of stage nine and runner-up to Froome in the Pyrenees in stage 10.

That was his final Tour appearance in Team Sky colours and he finished 43rd overall before signing with BMC Racing where he would enjoy leadership status.

In 2016 an untimely puncture in stage 2 cost him valuable time and three weeks later he would arrive in Paris ranked fifth on GC, over five minutes behind Froome but less than a minute from a podium position.

You know the story of 2017 and 2018. Fantastic form but DNF, both times in stage nine… let’s move on, nothing more to say about that – and it’s something he’d surely not want to be reminded of year on year for the rest of his career.

Last year, his first with Trek-Segafredo, Porte was 11th in the Tour, a strong result many would be proud of but he was still five minutes behind 10th place, aware that he could do better with a little more team support.

And that brings us to 2020, a “climber’s Tour” (again), “a brutally tough course” (again), with a sequence of mountains in the closing week and the challenging uphill time trial on the penultimate day.

We won’t know the winner for certain until the final rider arrives at La Planches des Belles Filles on Saturday, but if we consider what we’ve already seen of #TDF2020, there’s every reason to believe Richie Porte could climb his way onto the podium by the time they ride to Paris on Sunday.

Racing a bike in the Tour de France is hard work at the best of times. In 2020, it’s been more complicated than ever but also more compelling. There might only be two Australians in the peloton of 176 that lined up in Nice late in August, but they are both having quite an impact on the contest.

As we approach the final weekend, there are only 150 still in the bunch and only three lie ahead of Richie Porte in the race for overall honours. 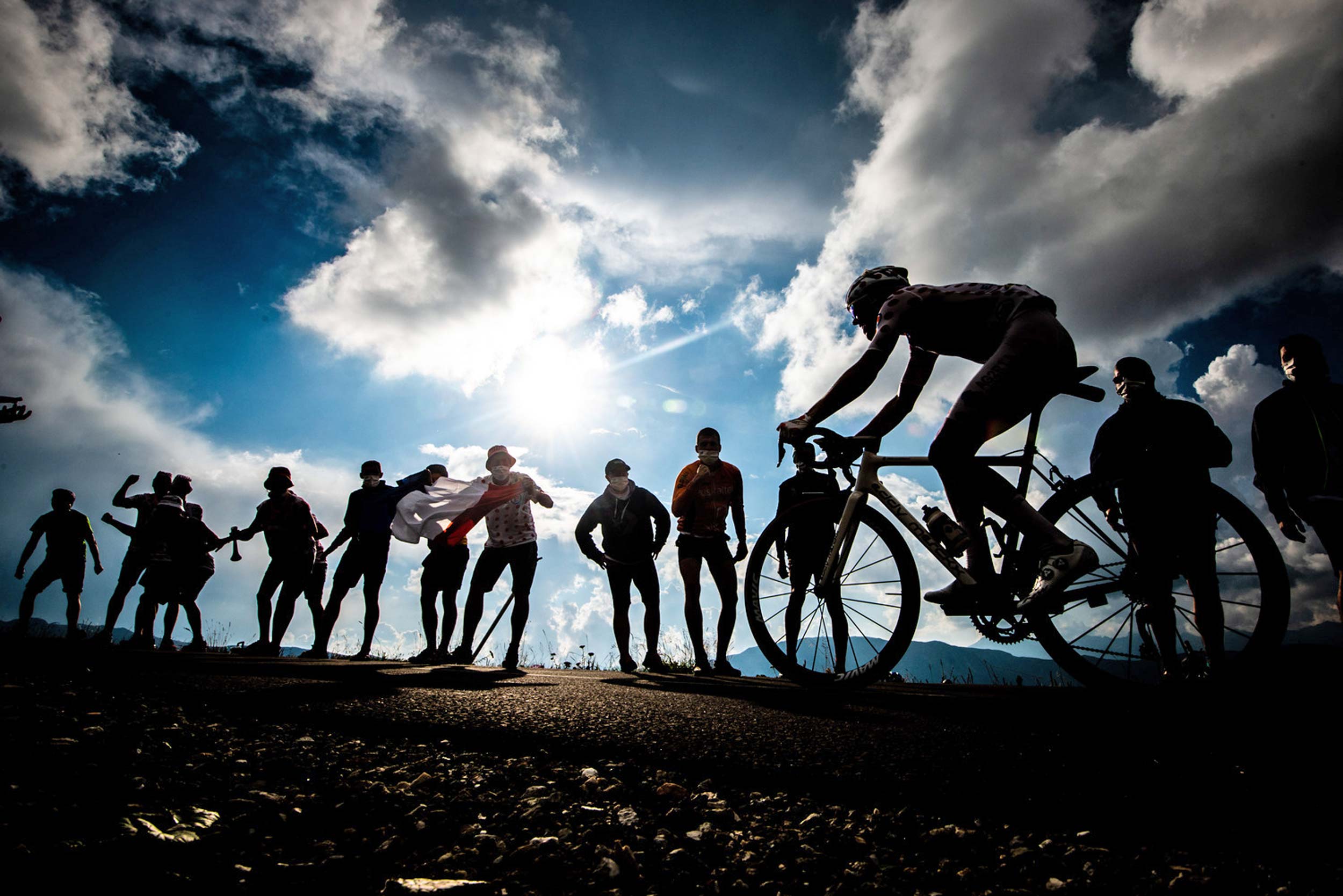 The aesthetic of the Tour has changed in 2020. The shadows of autumn are longer than they are in summer. There are smaller crowds and face masks and team bubbles and concerns about COVID-19. The head of the peloton is coloured yellow and black rather than the burgundy of 2019 or the blue line we’ve become familiar with in the last 10 years. There’s one Slovenian in the leader’s jersey and another Slovenian less than a minute behind on GC.

In stage 18, Primoz will wear yellow, Tadej will wear white, and Miguel Angel will be the caretaker of the polka-dot top.

Richie will still be in his Trek-Segafredo colours which don’t have quite the prominence in Le Tour 2020 as Jumbo-Visma or UAE Team Emirates or even Astana. Porte has been racing in the shadows for a few weeks but he’s coming into the spotlight at exactly the right time.

There are just 99 seconds between him and the podium and 10 years’ worth of work behind him.

The defending champion has gone home. The previous winner – and the champion before that – weren’t selected to race Le Tour in 2020. The third-place finisher of last year had broken bones before the race began and couldn’t start.

For Richie Porte, all this adds up to opportunity. He’s made huge sacrifices for 10 years to get in this position and in a few days we’ll find out if he can indeed finish off the work he started back in 2010.

To end this overview, I’ll repeat the conclusion of Richie’s column for RIDE from over 10 years ago, when he was a neo-pro full of energy and motivation. He’s experienced the good and bad from cycling since he wrote this before his first Tour but it still resonates and offers a hint of the drive that’s hidden deep inside.

“Finding the right job does take some effort,” wrote Porte early in his first season in the WorldTour ranks. “If the dream one comes along, then it’s only right you relish that chance.

“I grew up in a family that would go to the beach often. Dad tried to make my brothers and me go surfing and I was just always more interested in going riding.

“For me, the ultimate job is a professional cyclist. With the induction over, it’s time to deliver.”