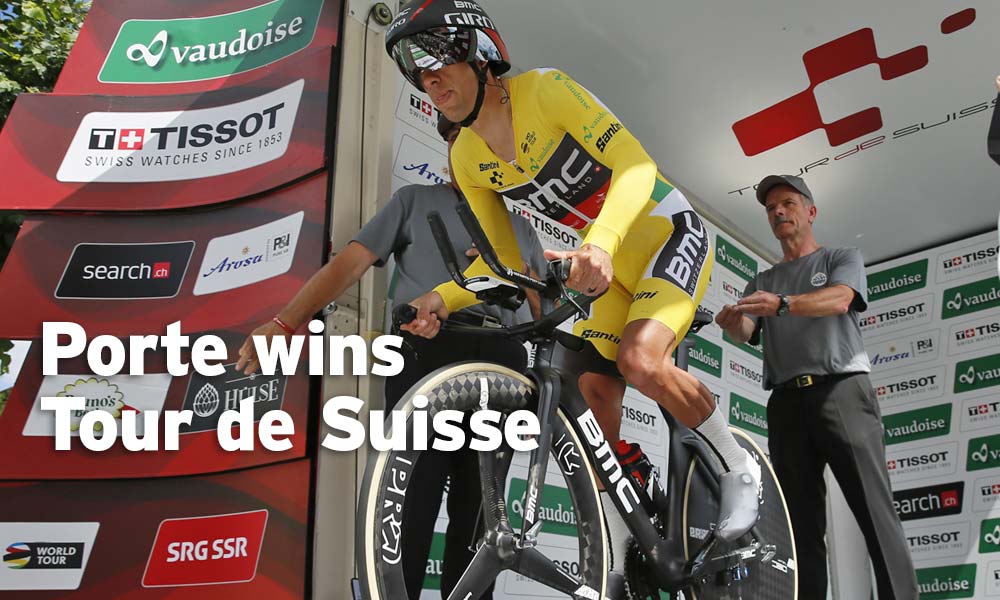 The winner of the 82nd edition of the Tour de Suisse is a debutant in the week-long race, Richie Porte of the BMC Racing Team. It’s a positive sign in June for The Race that’s coming up in July.

“This race is so special and to come here after the passing of Andy Rihs earlier in the season and win his home Tour is a massive satisfaction. I dedicate this win to Andy.”

It was Richie Porte’s first attempt at the Tour de Suisse. And it ended with an appearance on the podium in the winner’s yellow jersey.

His debut in Switzerland came only a few days after his wife gave birth to a baby boy and although he didn’t win a stage in his first race as a father, and he can ride away from the eight-stage event satisfied that he and his BMC Racing Team was able to control the general classification.

In May he was confident about his chances and, he told RIDE Media – in an interview for the Official Tour de France Guide (Australian edition), which is on sale around Australia today – that it was a key race for the team. “I’ve never done that race and I’ve always watched it on television. And also, with my wife being due to have a baby around the time of the Dauphiné, it was a no-brainer, really, to try something different.

“I guess being in a Swiss-based team and most of the guys [from BMC Racing] who are going to ride the Tour will be at the Tour de Suisse, so everything just kind of pointed towards doing that.”

Rihs would have been thrilled. Even when his team wasn’t winning, he was happy to see them in action. When victory came, he wasn’t shy about celebrating.

“If you have the spirit in a company, you can attract the best people,” said the Swiss businessman when explaining the philosophy behind BMC Racing. “When someone wins, you realise you have a great team and you can attract more good people. This is the case in business and in sport…

“Of course,” he continued, “you have to pay them but you make more money with that than if you pay just anyone to do the job.”

Richie Porte is a sound investment and the rewards have been steadily delivered during his two and a half years with the team to date. The Tour de Suisse win is his eighth title in a stage race of around a week, his third GC win while racing in the red and black colours of BMC. 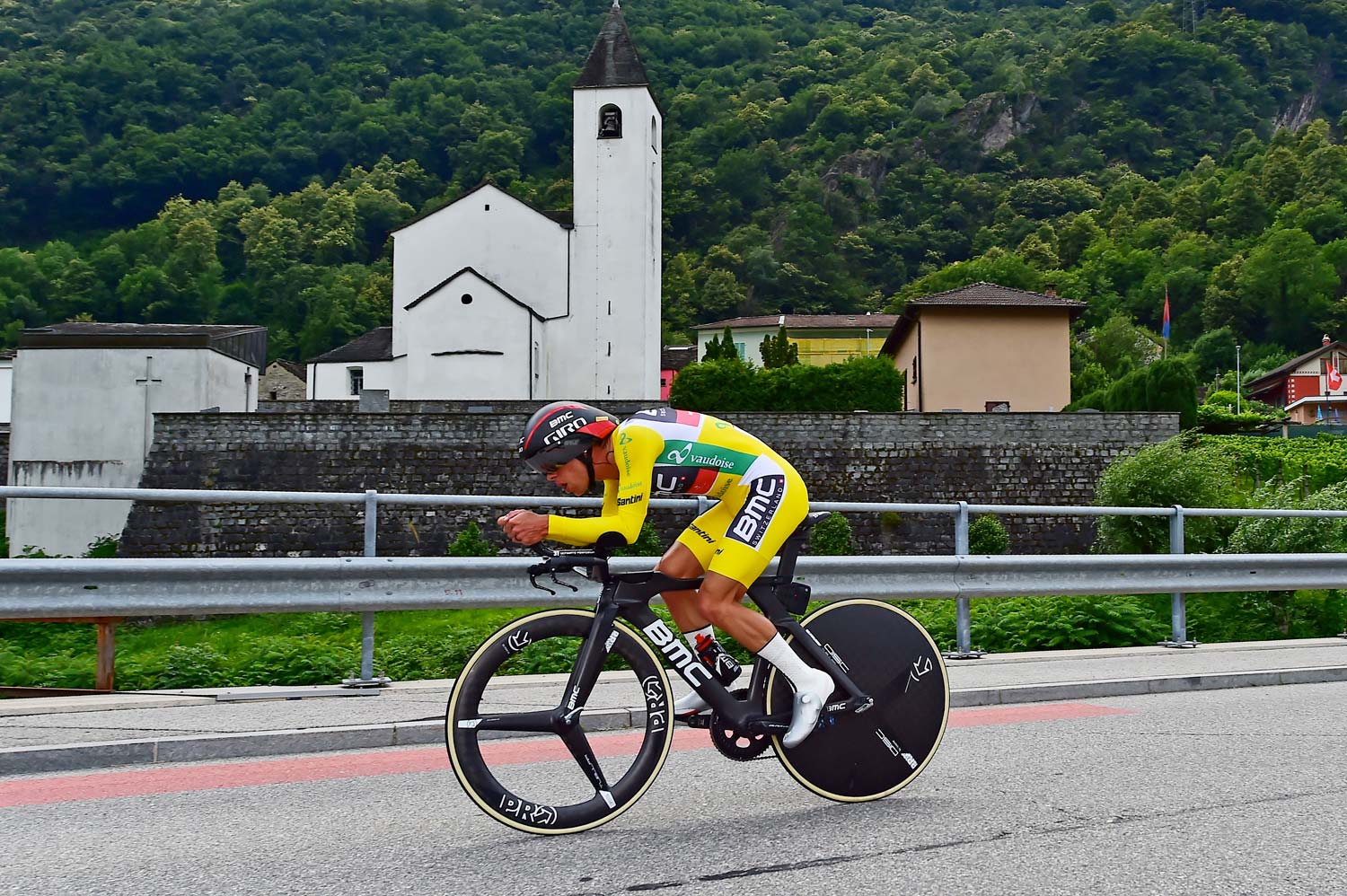 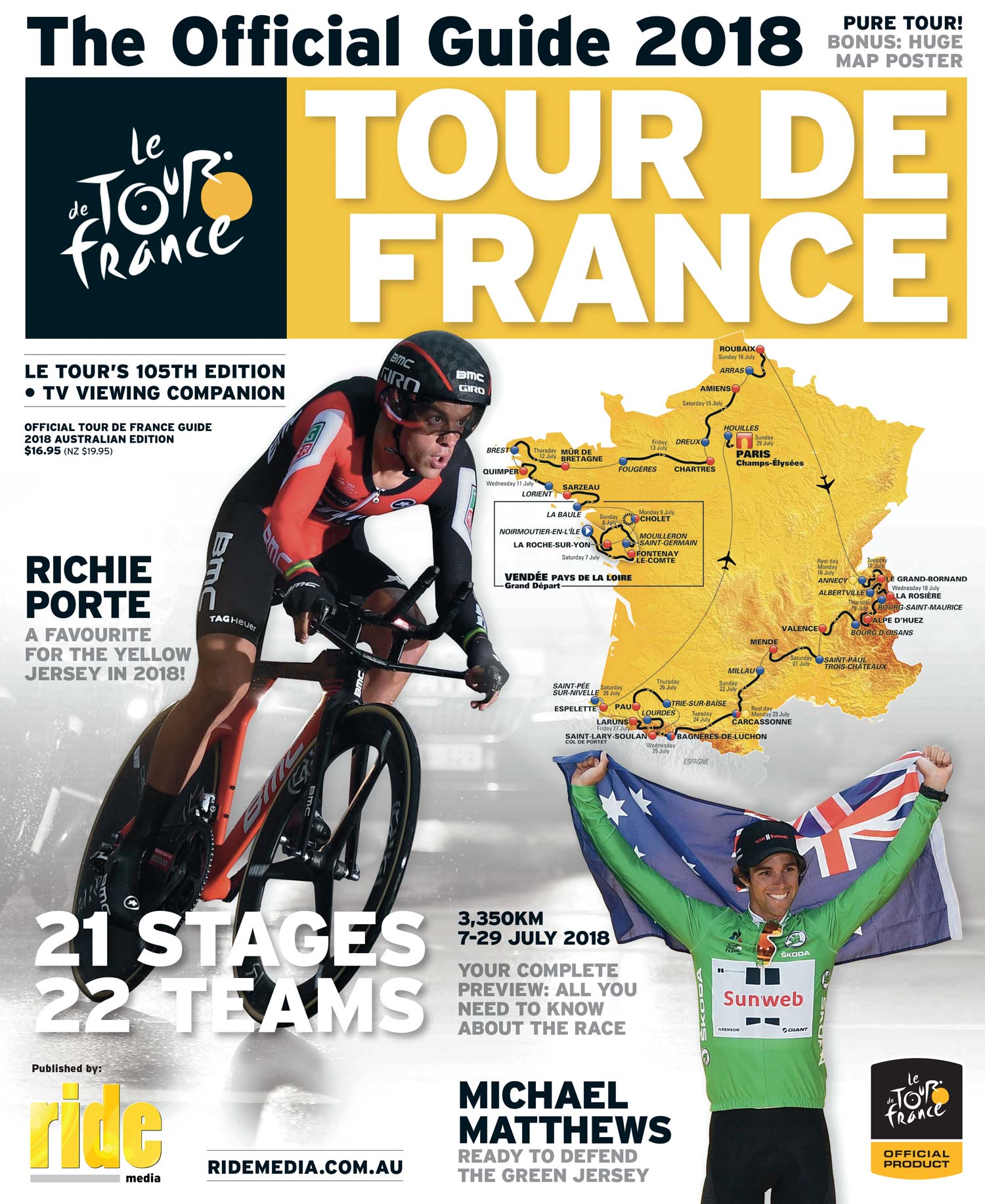 At this time in the season, it’s natural to appreciate the victory but then consider the bigger picture and the question: what comes next? Any stage race victory over the quality of riders who were part of the peloton in Switzerland last week is something to celebrate and although it does serve as a precursor to the next race, the rider himself reminds us that it’s a significant conquest in its own right.

“Let’s not beat around the bush,” he said afterwards, “it’s a very important race and I think it’s disrespectful to say it’s a ‘lead-in’ race for the Tour de France as it means a lot to win it.”

A year ago, he led another prestigious one-week race in June, the Criterium du Dauphiné in the French Alps. And it seemed he was going to ride off with the victory until the final day when Jakob Fuglsang pinched time on the final stage and, with that, the yellow jersey. The Dane was again the nearest rival but in Switzerland in 2018, the Tasmanian was better.

BMC ahead of Astana and Movistar. A great team effort and one that does serve as a preview for July but, for the moment, let’s savour what it is: a title for an Australian in a race with a lot of history.

It’s only the second time an Australian has won the Tour de Suisse; Porte follows the lead of Phil Anderson who took the title in 1985 when he relegated two Swiss La Vie Claire team-mates – Niki Rüttimann and Guido Winterberg – to second and third place, respectively. That was 33 years ago and Richie Porte was only a few months old.

In early June 2018, the 33-year-old Tasmanian became a father. He changed his race program to suit that momentous event and instead of contesting the Criterium du Dauphiné he waited another week and made his debut in the Swiss race.

“It would have been nice to have won a stage here and maybe if the breakaway hadn’t stayed away on Thursday’s stage, I would have won one,” he said on Sunday. “At the end of the day, to win the general classification was the big goal and I’m still happy with the victory.

“I’m ready for the Tour de France. I did a good race here. I’m not at the top of my form just yet so I am excited for July.”

Australian cycling fans also have reason to be excited for July. 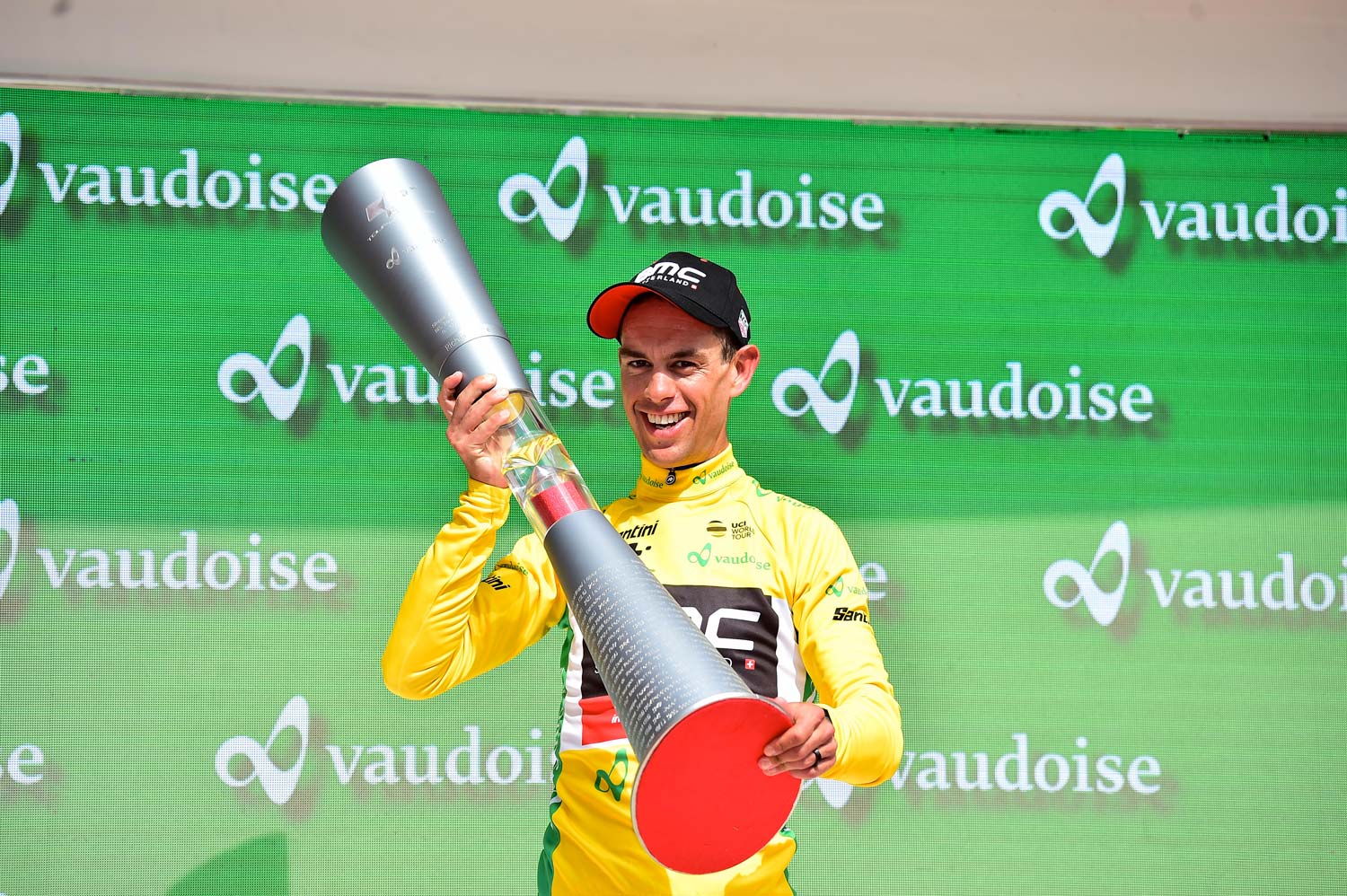 Richie Porte (above), the second Australian to win the Tour de Suisse – following the example set by Phil Anderson in 1985.

All that he accomplished in Switzerland cannot be ignored but it was difficult to follow the race from the other side of the world. It’s not just a ‘lead-in race’, it’s a national tour but it lacked international TV coverage. It wasn’t on free-to-air, it wasn’t on Eurosport… it wasn’t broadcast in Australia. There were highlights to be found online, data relayed by BMC Racing’s partner Velon, images filtered through… but Australians couldn’t watch it live.

When he lines up for the Tour de France next month, there’ll be saturation coverage on SBS TV and other media outlets will tune in to see how he fares. The public have come to know him well over the years and we understand that this July is a pivotal month for Porte who is aiming to become the second Australian to win The Big One, Le Tour.

BMC Racing was the only team to have worn the yellow jersey at the Tour de Suisse. Former individual pursuit world champion Stefan Küng led his team-mates across the line to win the opening stage, a team time trial, and he held the lead of GC until Porte took over, and then the Swiss rider won again on the final day, another TT.

Porte was 14th in the final stage, and Fuglsang eighth, taking time on his main rival… but not quite enough. The overall deficit in the end was over a minute: 1:02 between the Tasmanian and the Dane, with the Colombian who won stage seven, Quintana, ranked third on GC 1:12 behind. 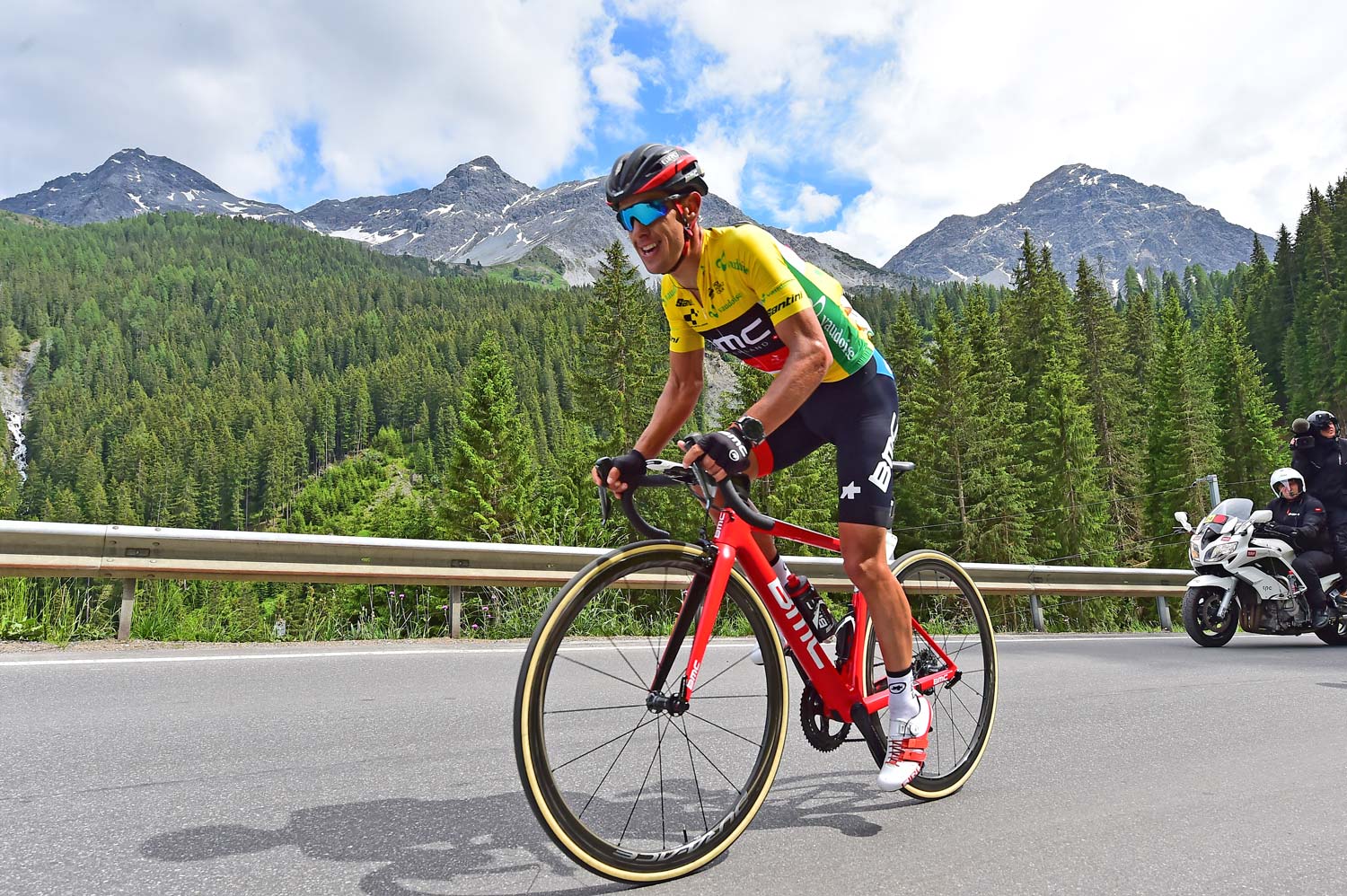 Another stage race, another yellow jersey. Porte climbed well in stage seven (above).

In the lead-up to parenthood – and the Tour de Suisse – Porte kept himself busy climbing, on average, “around 20,000m per week”. Up and down mountains he went, near his home in Monaco to be near his wife Gemma. The couple are now a trio and there are a few weeks to adjust to the massive change in life that is happening.

The training is clearly paying dividends, you don’t win a stage race in Switzerland in June unless you’r going well. He may not be in his best form but it was good enough to win the title and take a collective win on day one. Along with Küng and five others – Greg Van Avermaet, Simon Gerrans, Michael Schär and Alessandro de Marchi – BMC Racing controlled proceedings on day one.

Porte then finished in the top eight in three stages: eighth at Leukerbad (day five), sixth at Gommiswald (day six), and third at Arosa (day seven)… and his consistency earned him the yellow jersey.

It won’t be long before he sets off again to try and win a bike race. He knows what to expect in July. He’s been there and done that… only this time he hopes it will end with a result he knows he’s capable of.

Victory in the Tour de Suisse is certainly one to celebrate but it was achieved with few Australians watching on. Come the Tour de France, there’ll be a legion of fans tuning in and cheering him on. He says he’s not yet in top shape but it’s good enough to beat all his rivals in June. We’ll see what comes in July… 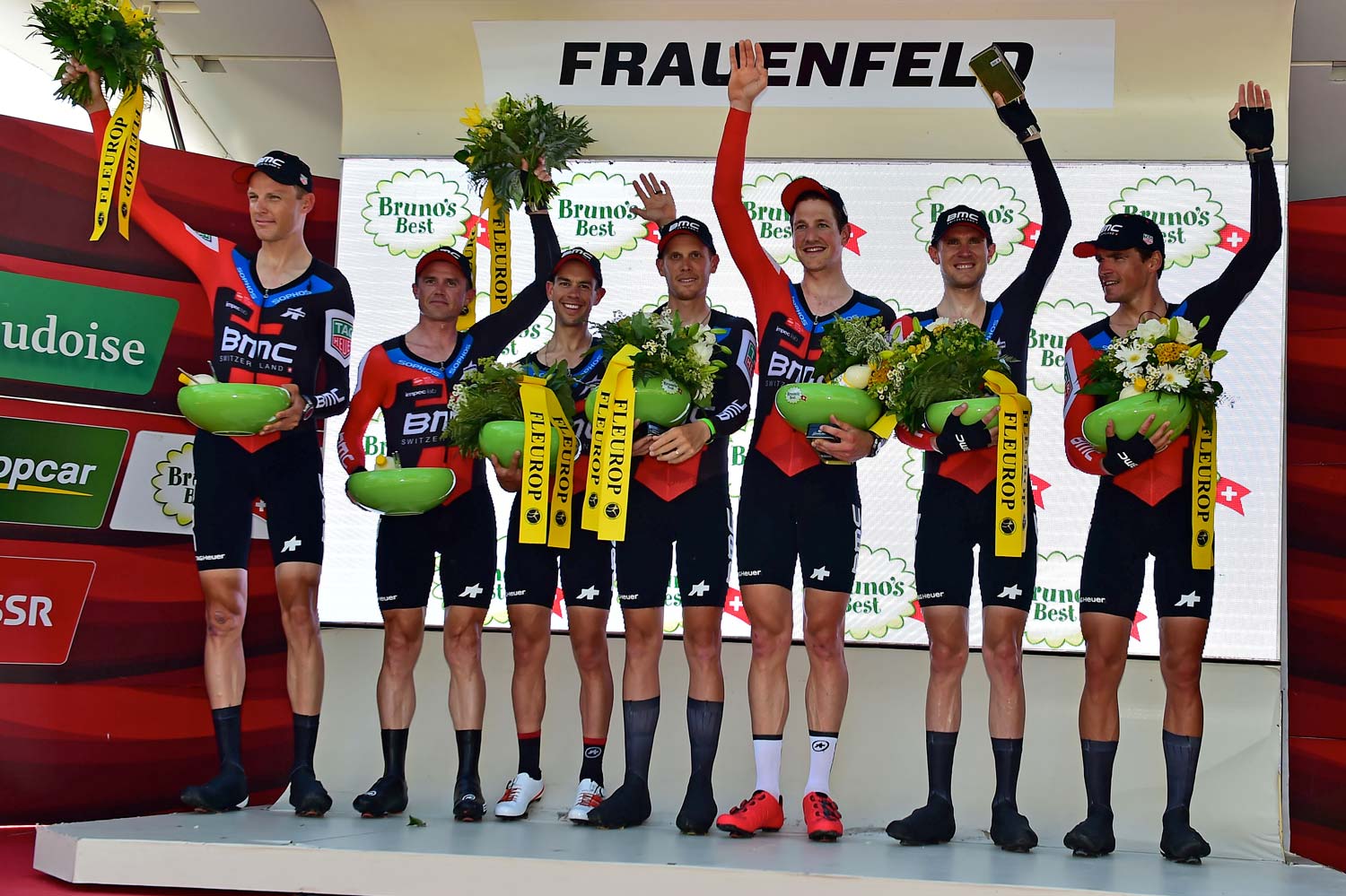