Ride Diary: cycling in our cities – why can’t it be ‘Ride To School’ day every day?

Life in the city is getting back to ‘normal’ after a long lockdown. But do we really want everything to back to how it was in ‘The Before Time’? Consider the trip to school. Imagine if a few driving drop-offs were replaced by riding bikes… it’s a little detail but it could make a big difference for everyone.

Cycling can be great in this town but as every bike rider in Sydney knows, there’s one major hurdle: traffic. It can be rotten, off-putting even. And there are obvious times when the snarl on the roads gets distinctly worse.

During the pandemic the usual angry mood on Sydney’s roads has quelled a little. When it was lockdown, it may have calmed a lot (but I don’t know – I barely left my suburb). But things are opening again and one of the first things impacted is the flow on the roads.

School campuses are operating as of this week. Kids are attending classes… get this: in person! In 2021. Yeah, it is happening.

After months of home schooling, our boys are back in a classroom – complete with mates and teachers and exams and learning… in the company of others. What a relief it must be for them and all other kids who have been holed up in their rooms instead of getting the stimulation of life that young people need.

This too is relevant to the #RideDiary and I raise it because children returning to school impacts my morning ride route selection. The increase in traffic was apparent yesterday when I was riding around Sydney’s eastern suburbs. The roads that had been relatively calm for months – certainly in comparison to ‘normal’ times (whatever that is) – are now a little more hectic. And, alas, it didn’t take long to realise why.

The long queue of cars – with a shocking prevalence of 4WDs – at certain locations reminded me of the apathy that has developed in our society. The driving school drop-off by parents has always intrigued me and I’m yet to work out why it happens so often.

Of course, I understand that life doesn’t stand still for many. That the days are busy and there’s work to do and meetings to attend and deals to broker and… etc. For some parents that can add up to a slight deviation on a commute to work, with the kids in the passenger seat before the drop-off. But every day?! Really? Is that how we have evolved?

My youngest goes to the local primary school. My eldest attends a high school a few stations away. One walks to school, the other had traditionally caught the train. But today he’s going to ride his bike. The pandemic begged for a change in his routine.

I’m thankful that he’s a competent bike rider. Actually, he’s a very good cyclist. (If I may be so bold, I’ll gloat a little and say: I helped make him that way.) He handles himself very well and knows to pay more attention to traffic than anything else. Safety is always a concern for bike riders and it’s natural for parents to worry, but when he asked on the weekend if he could ride to school instead of catching the train, we talked about it and concluded: ‘Yes, that’s a good idea.’

What was once so logical is now fraught with many extra considerations – and, alas, a good dose of trepidation. The ride to school was such a natural instinct for me in the late-1970s and through the 1980s, but I was lucky: I lived in a sleepy Australian coastal town for most of my school years and, for a few intervening years, I was fortunate enough to get some of my education in the Netherlands. Riding a bike, thus, is a very natural thing for me to do. 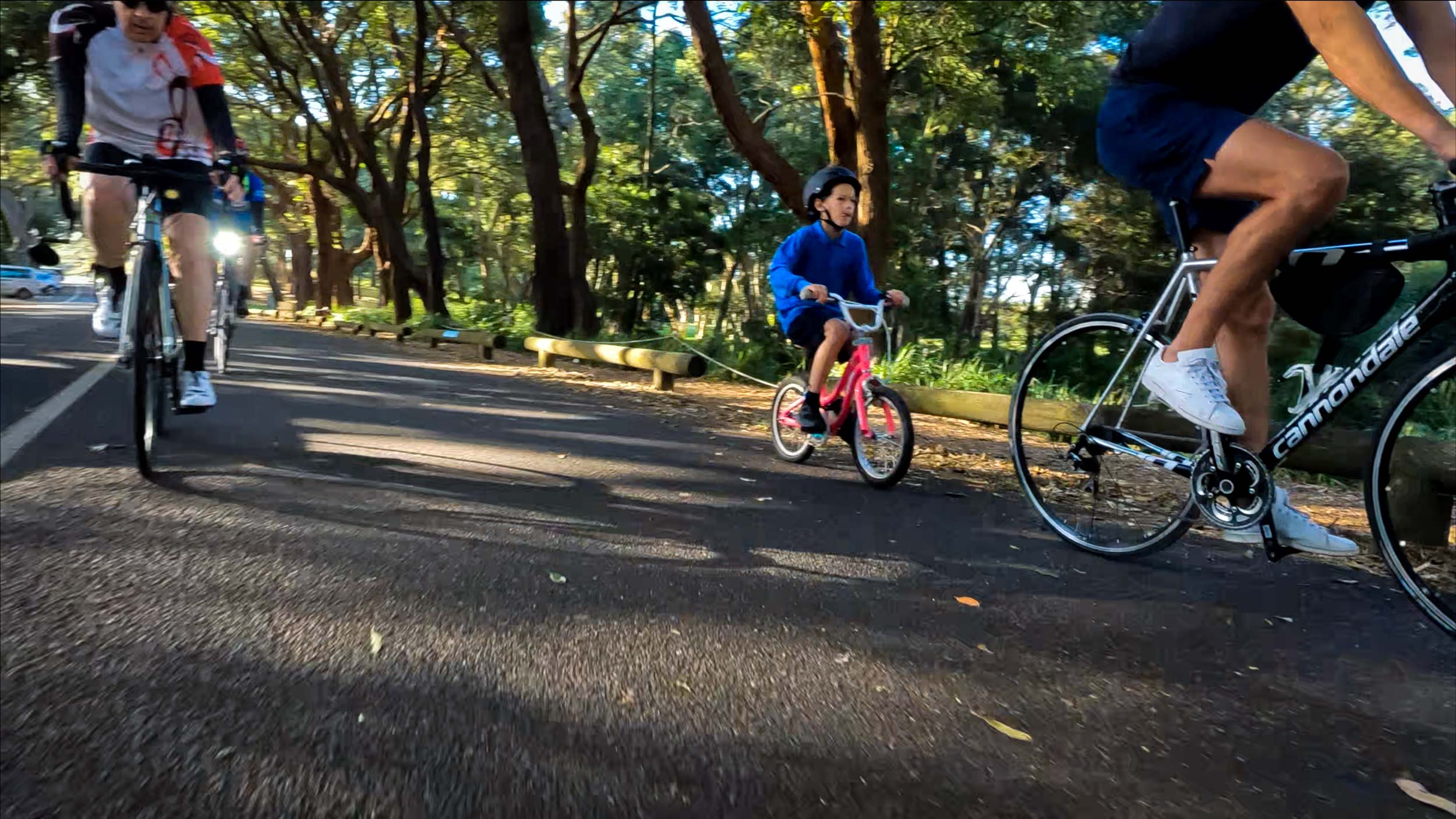 I now ride for pleasure (and, if I’m honest, for my job – although I’m far from a pro cyclist). I also ride because it’s practical: it gets me around town with ease and I get to see the sunrise at beautiful locations, or it allows me to arrive at the beach less flustered and closer to the water than I would if I drove. Cycling is my passion, but it is also a very useful means of transport.

I’ve long lived the cycling life and I’d strongly encourage others to try it. There are many rewards. But I also understand that there’s a compulsion to drive the kids to school when there are so many inherent risks with getting them there any other way. The train had been practical, timely, and a good way for my eldest to start the day… but he’s now got to wear a face mask in class and he explained that, if he rides, he can get some exercise and maybe even have a little more mask-free time before and after school.

There are bike paths in Sydney. There are certainly more in October 2021 than there were in March 2020, before the impact of COVID really started to kick in.

There are, I now know, also more cars (and 4WDs) on our roads than there were only a couple of weeks ago. And inside those cars are kids being ushered to schools by concerned parents who logically have their doubts about the cycling option…

Much of the worry that’s related to allowing kids to ride to school or not relates to traffic. ‘I don’t want my children on the roads with so many cars,’ they say. ‘And if I drive them to school, I know they’ll get their safely.’ Etc.

Of course, it’s not always practical. It can be wet or windy, or there may be a big science project that needs shuttling from home to school. Maybe the distance is too great or the bike too valuable to be left in the racks where other kids can meddle with it (and this excuse was, I’ll be honest, my main concern when I rode my precious 1983 GT BMX to school in Coffs Harbour all those years ago).

But when it’s good weather and there are new bike paths and we’ve just come out of lockdown and the joy of exercise has never been so obvious, why do we just slip back into the routine of ‘The Before Time’ and drive kiddies to school? 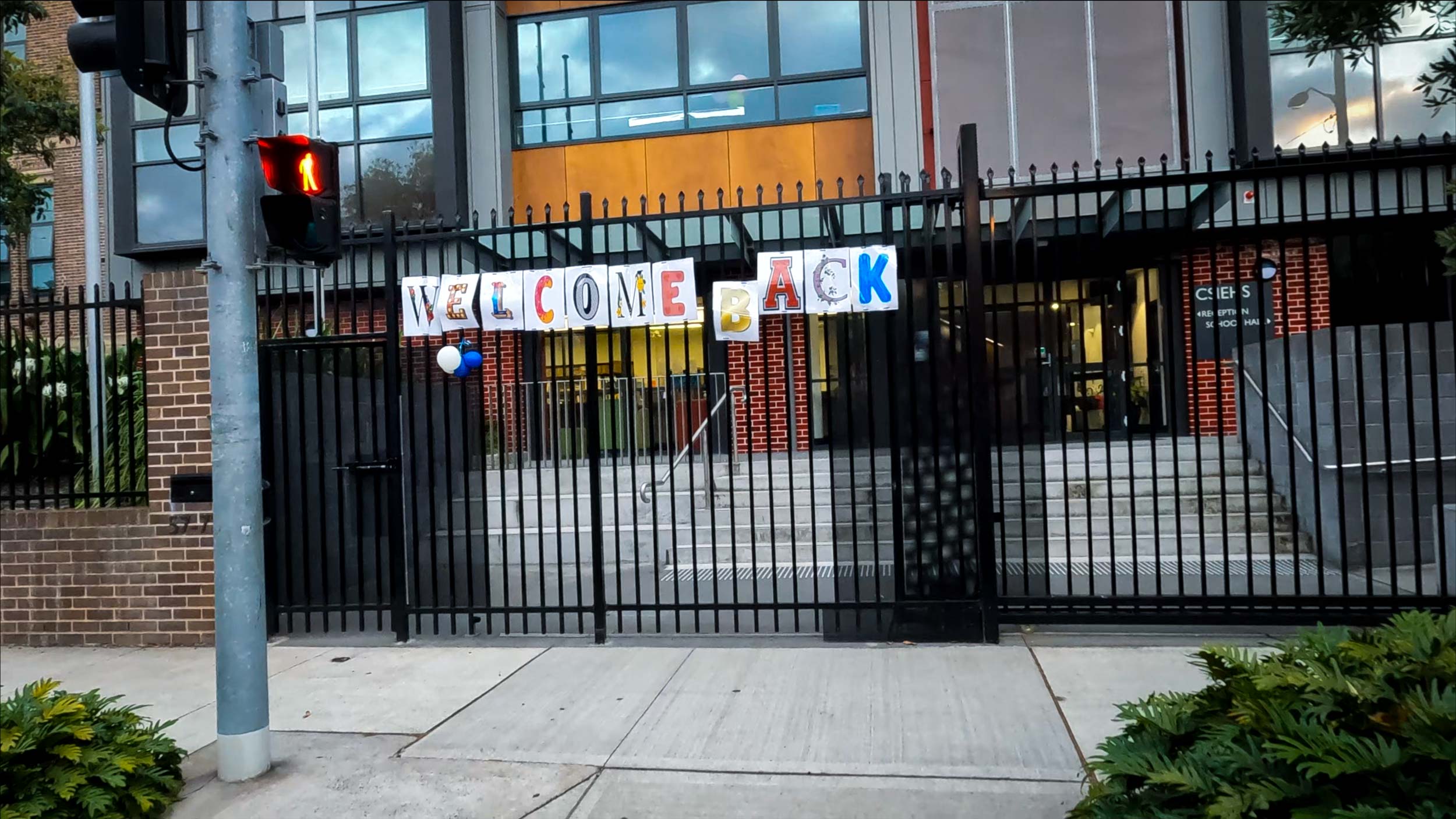 It’s 2021, and we’ve been through a lot over the last little while. Our lives have changed and all that was before is now significantly different. We know we can work from home and manage meetings online. The commuting life still exists, but it’s different now. It was weird at first, but we’ve all had long enough to adjust and, some of the time, the enforced alternative was actually a more practical solution to ‘normal’ (whatever that is).

The same applies to the traditional school drop-off. Yes, it was part of how things were done for years and there are many reasons why the driving option became so prevalent. But children could easily get there another way, a more practical way, a more enjoyable way, a less polluting way… and if that were to happen, there’d be fewer queues outside school gates, less cars on the road. The traffic would flow better and there wouldn’t be so many tempers being tested by the rage that often comes from going nowhere while burning petrol.

Surely, in 2021 – when so much has changed, including our mindset – we can at least consider riding to school. The kids don’t have to go alone, parents can join them and ensure they’re safe while also getting some air in their lungs and movement in their legs before the working day.

Riding a bike to school is not a solution to all of the world’s problems but at least it would negate the build-up of traffic on roads that, until school campuses opened up again, were largely free of cars (and 4WDs).

The message from this column is clear: if you ride a bike, it can be good for you… but also for your city… and society. And surely that’s a good thing.