After a week without riding, I was about to embark on the 235km Peaks Challenge in Victoria’s High Country. The day before The Big Ride, I enjoyed my maiden journey in this part of Australia… and I talked about it – a lot!

A lot of thoughts come to mind when I’m riding my bike and, at the same time, I often just find myself drifting away from some of life’s pressures. Cycling offers physical stimulation, I think we all know that. But the mental release it provides should never be underestimated. You can begin the day feeling awkward and confused, a stranger in a new place. Get on the bike, go for a ride, take some time to look around and before long, you feel relaxed yet in command, confident and content, happy and invigorated.

As the day of my first Peaks Challenge drew closer, doubt about my form began to creep into my mind. I’d been off the bike for a week, largely because of the rank weather in Sydney. Yes, I could have pedalled on the indoor trainer and maintained fitness, but it had been such a great summer of riding that I just couldn’t do that. Not yet.

The time will come when the back wheel is removed and my bike gets fitted to the Tacx Neo 2 trainer, but before my trip to Victoria’s High Country, I didn’t capitulate. Instead, I just waited to see if the rain would stop one day and allow the sun to shine. 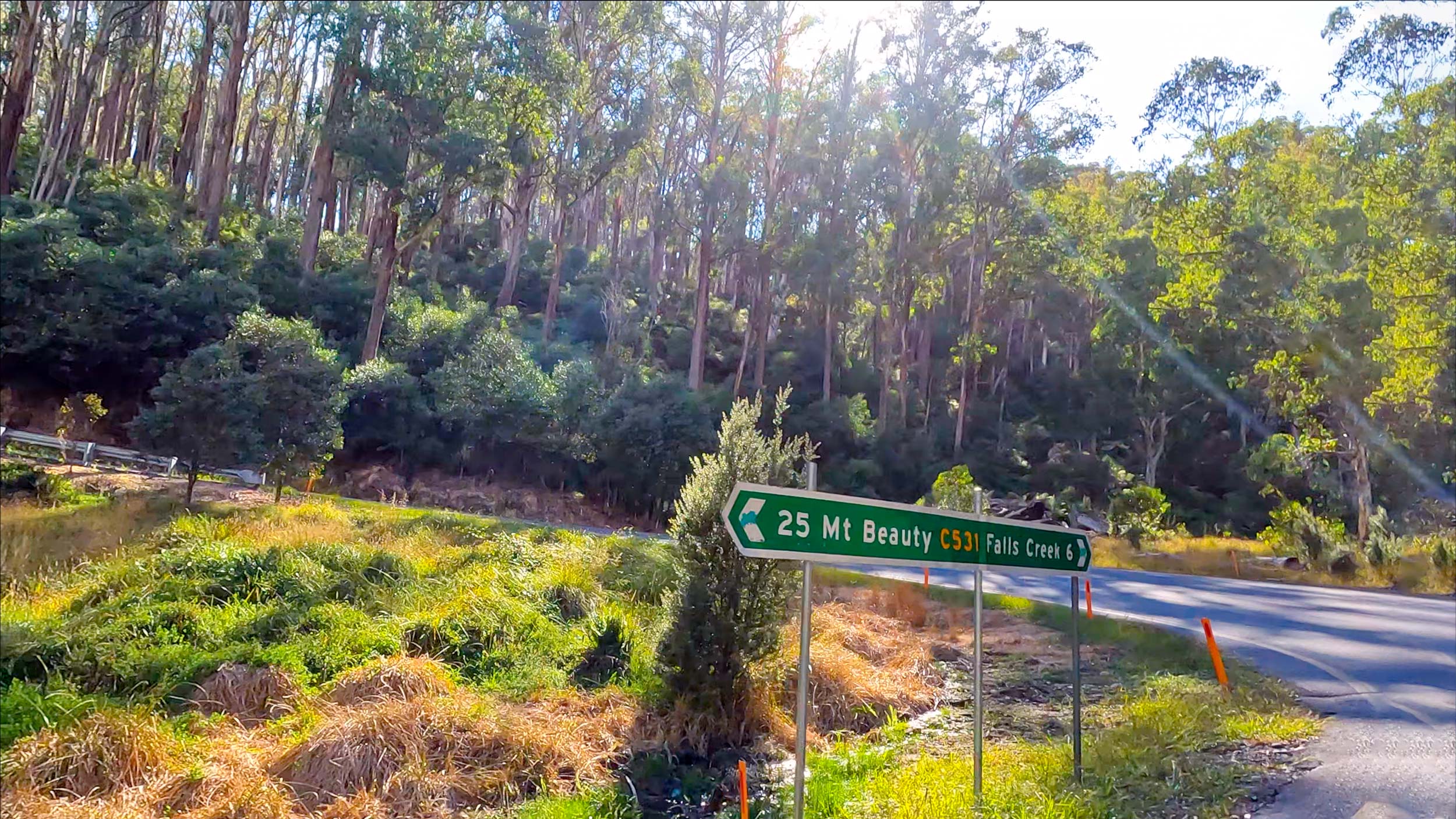 From one Saturday to the next, I kept waiting. And it kept raining.

By then I was committed to the trip to Falls Creek and, on my drive south from Sydney (roughly 750km, depending on your willingness to look around), the cloud lifted and blue skies emerged on the horizon.

As I crossed the mighty Murray, moving from NSW to Victoria – formalising my first interstate adventure since January 2020 – it seemed as though there might even be a weekend of fine weather on offer.

Already there was a reward. Early March in Sydney in 2022 was wetter than I can remember. It was not rain like you’ve seen before; it was a river in the sky… day after day, and the flooding that ensued has been well reported. Our place was unscathed by the rising water, but the upset was all around. It was hard to ignore the devastation that people were experiencing, and I felt a little guilty just going out of town so that I could ride my bike.

The commitment was made on the Tuesday, and by Friday I was driving: two bikes (one for the road, one for gravel) and plenty of kit packed in the back of the car, and it was time for the #RoadTrip to begin. 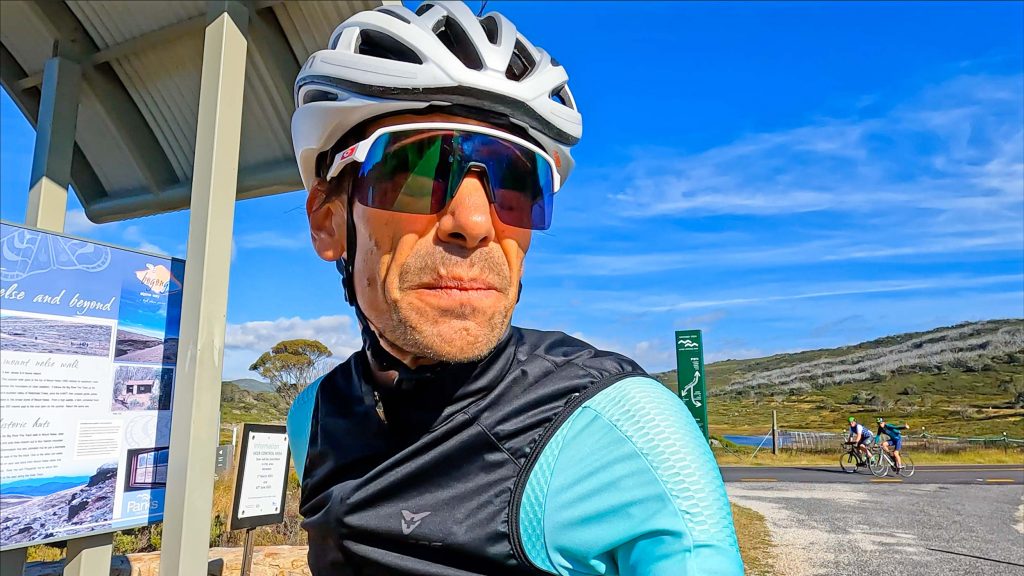 I’m not new to travel. I’ve been a wandering soul most of my life and I’m thankful that I’m able to say that I’ve seen a fair bit of our world over the years. But this all felt new again: an adventure, in another state, a new destination, and a chance to explore a little and live a lot.

Before I’d ride, I drove. But when I got to Falls Creek, I was directed to where I could park the car and once in position at the top of the ski resort that’s where the Skoda stayed all weekend.

My bikes and my feet would get me around, and that’s just how I like to do things. Riding and walking makes for much better exploring… especially in a place like this where so many highlights are packed into one region. What’s more, if you speed by in a car, you miss half of the beauty of a place like this. 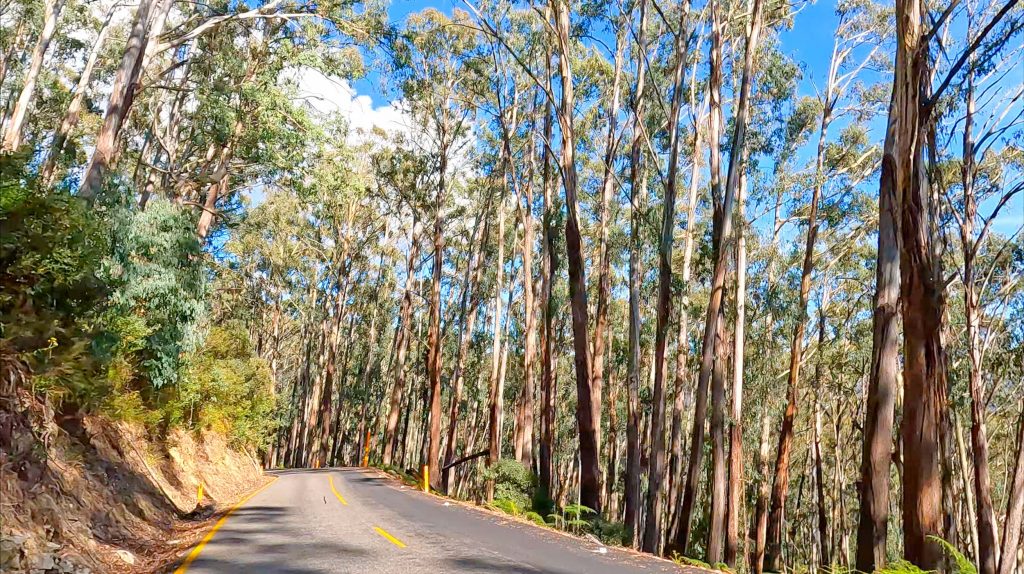 I stayed up high, at over 1,500 metres, at Falls Creek. That was base for a couple of days but rarely did I sit still.

After checking into Karelia Alpine Lodge – “the only Austrian / Swiss Chalet in Falls Creek” – and experiencing that time warp (from 2022 to … 1970, maybe even 1960) it was time to explore. Before eating dinner, I took a look around Falls Creek. And everywhere I looked, I saw beauty.

This was a three-night, four-day holiday that would take me to a new mindset. Negativity and memories of the rain faded. The angst that had built up over a couple of years without travel abated. My eyes were wide open, and I liked what I could see.

The views come first. You can’t help but be captivated by the sight of the mountains and the valleys. The trees and the landscape are enough to make the trip worthwhile, but it’s what you find when you look closer that offers the true surprise. 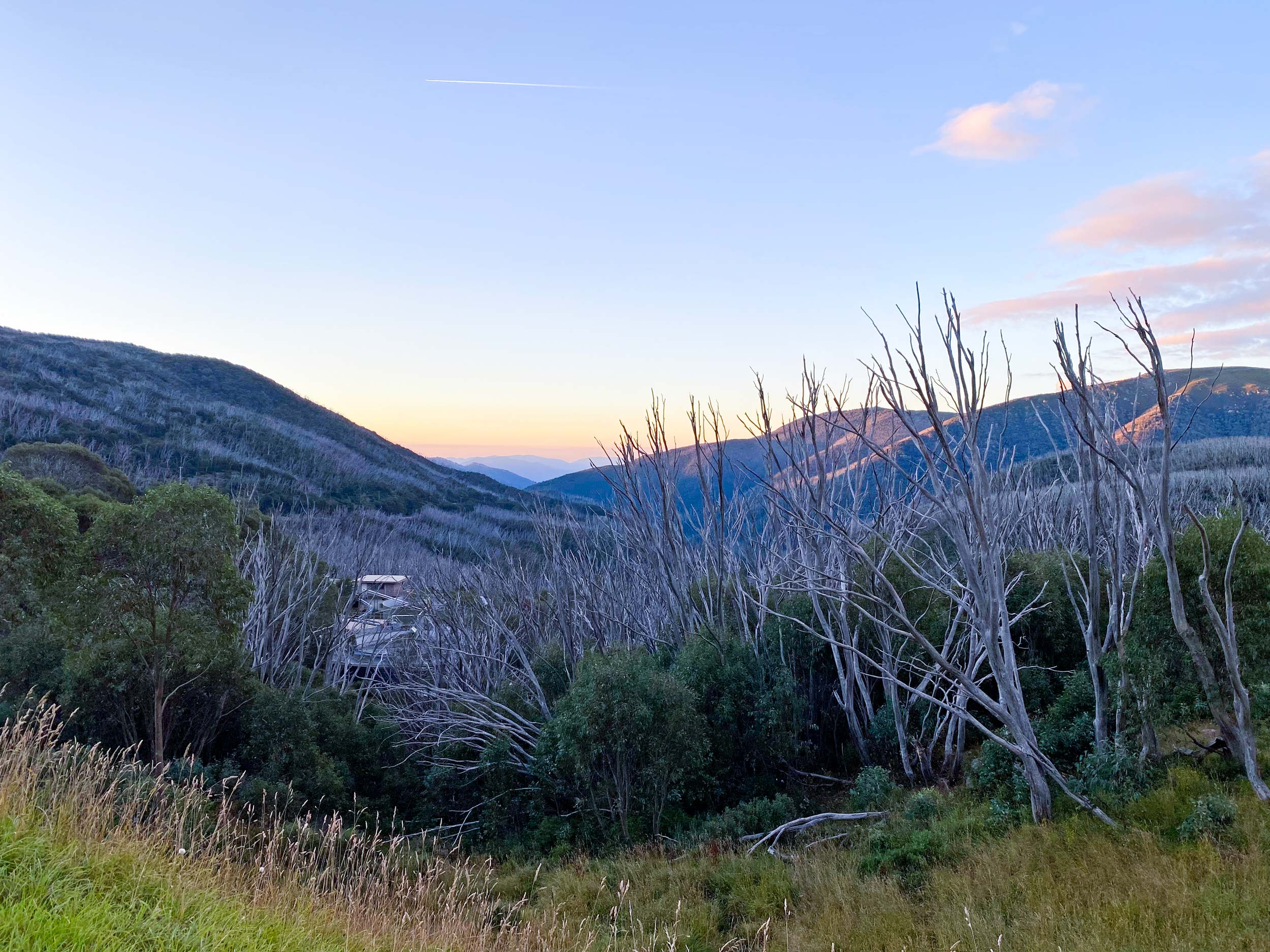 It’s a gorgeous part of the world and, of course, you always cherish that first moment. When you find somewhere lovely, and it’s all new to you, it ignites the senses in a more dramatic way. That’s how it was on the Friday and Saturday.

By the time I left Victoria’s High Country on Monday, however, I felt a sense of belonging. It was all new to me when I arrived but only a few days served to make it feel like this was My Place.

Cycling was the reason for the visit, and the bike helped to showcase the region and the surrounds in a perfect way.

Less than 12 hours after arriving, I was sold on the notion of this being a top spot for a holiday and planning for a family adventure began almost immediately. Falls Creek has long been a popular destination in winter but cycling has turned things around for the warmer months of the year.

The mountains provide an ideal setting for cyclists and Victoria’s High Country has embraced that idea and it’s quickly becoming a riding destination for Australians looking for a holiday alternative that doesn’t involve sand or surf. Instead, there’s riding, riding, and more riding to keep you entertained. 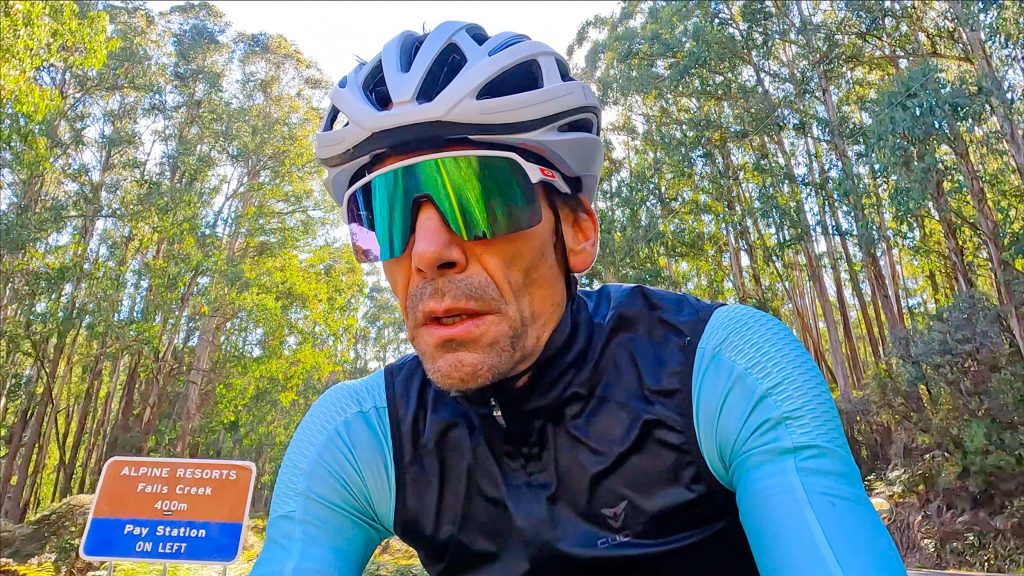 After getting a lay of the land while searching out a coffee in the village up high, I kitted up, clipped into the pedals and set off. First I went up the hill, then I went down the mountain, and always I found roads and bike paths that enticed me to go further, to look closer, to follow my senses…

The aim of my Saturday ride was to find my legs again, to see if my summer fitness had vanished in the weeks of wet that preceded the journey to Victoria. And I’d end up rounding out 120km – half of it downhill, half uphill, often meandering – and, with that, came a sense of satisfaction that is hard to find in the city.

Not one traffic light slowed my morning of exploration but that doesn’t mean I didn’t stop. There’d be plenty to see: beautiful trees, local wildlife, and rivers that were both captivating and tempting.

I didn’t end up swimming, even if the thought crossed my mind several times. This was to be a cycling weekend, and so I rode. And rode.

At the end of it all, the doubt about my form faded and I was confident that I’d be able to make my way around the Peaks Challenge loop without too much fuss. There was enough energy in my legs to keep pushing the pedals and if pain or cramp ever creeped in, I would pause and look around while my body recharged. 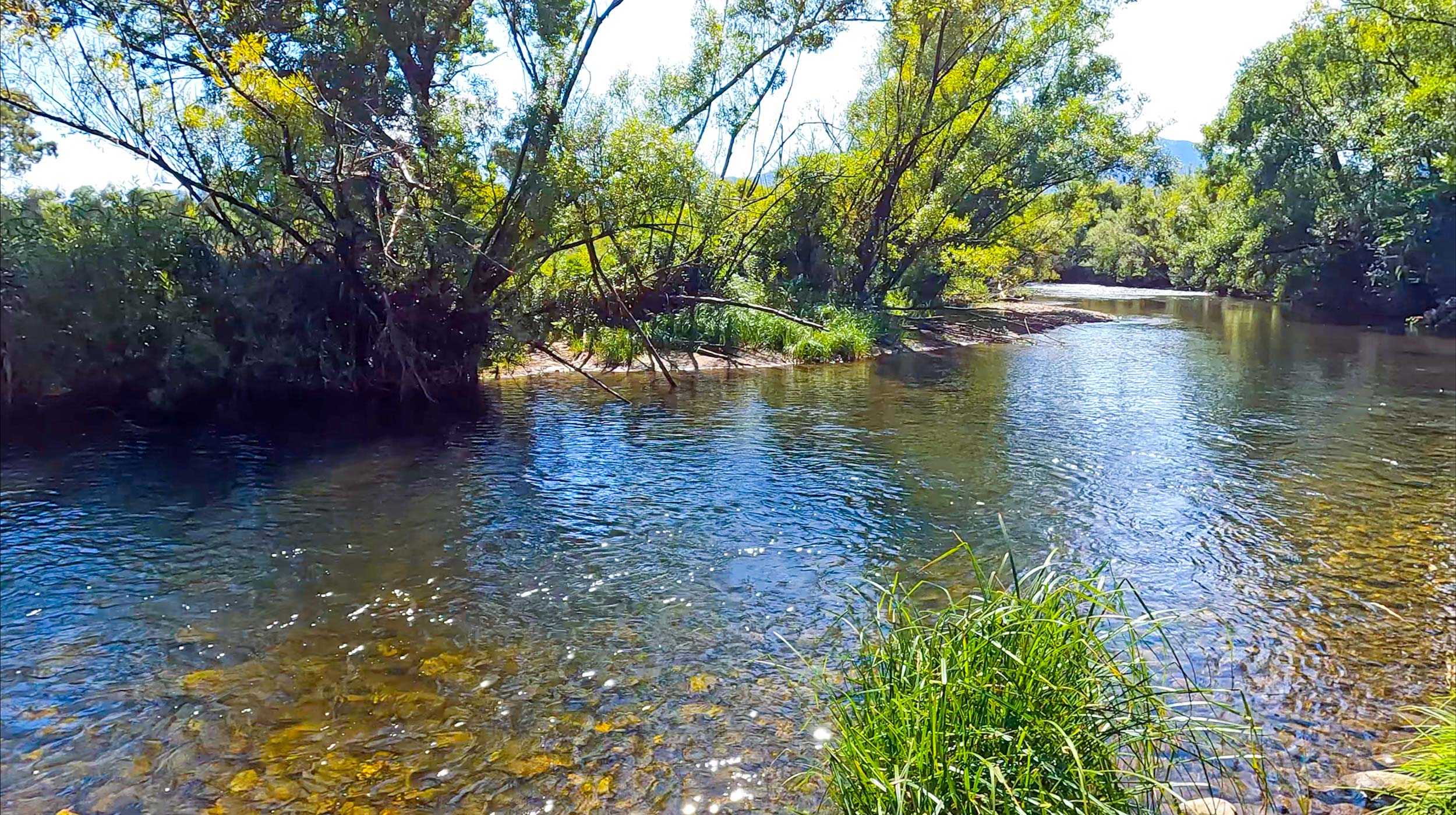 The videos associated with this Ride Diary explain what I did on that Saturday morning. I went for a ride, as I like to do every weekend. And this time I found things that would cheer me up and allow me to turn negative thoughts into positive ones; frustration faded and happiness emerged.

It was one ride but it conjured many stories.

You ride too, so you know how this can happen. Every cyclist knows the feeling: it’s easy to find yourself when you’ve got some time to ride your bike.

There was a bit of exercise on my Saturday ride, but it was much more than just another workout for the sake of a workout; it was a chance to look around. And it was a joy to see somewhere different, somewhere new… somewhere that will, I’m confident to say, become familiar in the years to come. It was my first taste of riding in Victoria’s High Country, but it won’t be my last.