Yesterday was not the first time I’ve found myself in a ridiculous situation because of an impatient driver. But the motorist involved might at least realise that his antics were wrong… at least that’s what he told the police after an incident in traffic was reported.

Another day. Another video. Another dose of commentary about riding a bicycle. When the lockdown ended, there was only one day of trepidation as I adjusted to the routine I’ve had for a very long time. After that initial ride, however, I quickly settled into the rhythm of what I’ve always done. I ride a bike. I do it often and, after around 45 years of regular cycling, it’s something that still ignites my senses and provides me with satisfaction on many levels.

Of course, there are good and bad days on the bike. Yesterday’s ride conjured a mix of emotions and, alas, one of them was frustration.

Before frustration, there was fright, then anger, then confusion, then upset.

A good ride turned bad because of an incident on a steep downhill road and a driver who lacked any sense of understanding, respect, or common decency.

He wanted to pass me – and to hell with the consequences.

I’ll refrain from going into all the details with this diary entry, but the particulars are outlined in the video – and, as you’ll see (if you click ‘play’ on the link above), my mood shifts from calm to furious as I consider the actions of a motorist who put me in danger for no rational reason. Unfortunately, it’s not the first time something like this has happened and it probably won’t be the last.

When I started these ride diaries, it was with the intention of highlighting all the good that can come from cycling and all it offers. Encouraging people to ride bikes has been part of my life’s work (without exaggeration) and yet there are times when I’m glad it has been me in the situation I find myself in, not others who are less experienced riders.

– Related: #RideDiary: Reminder of the consequences of a moment’s distraction – 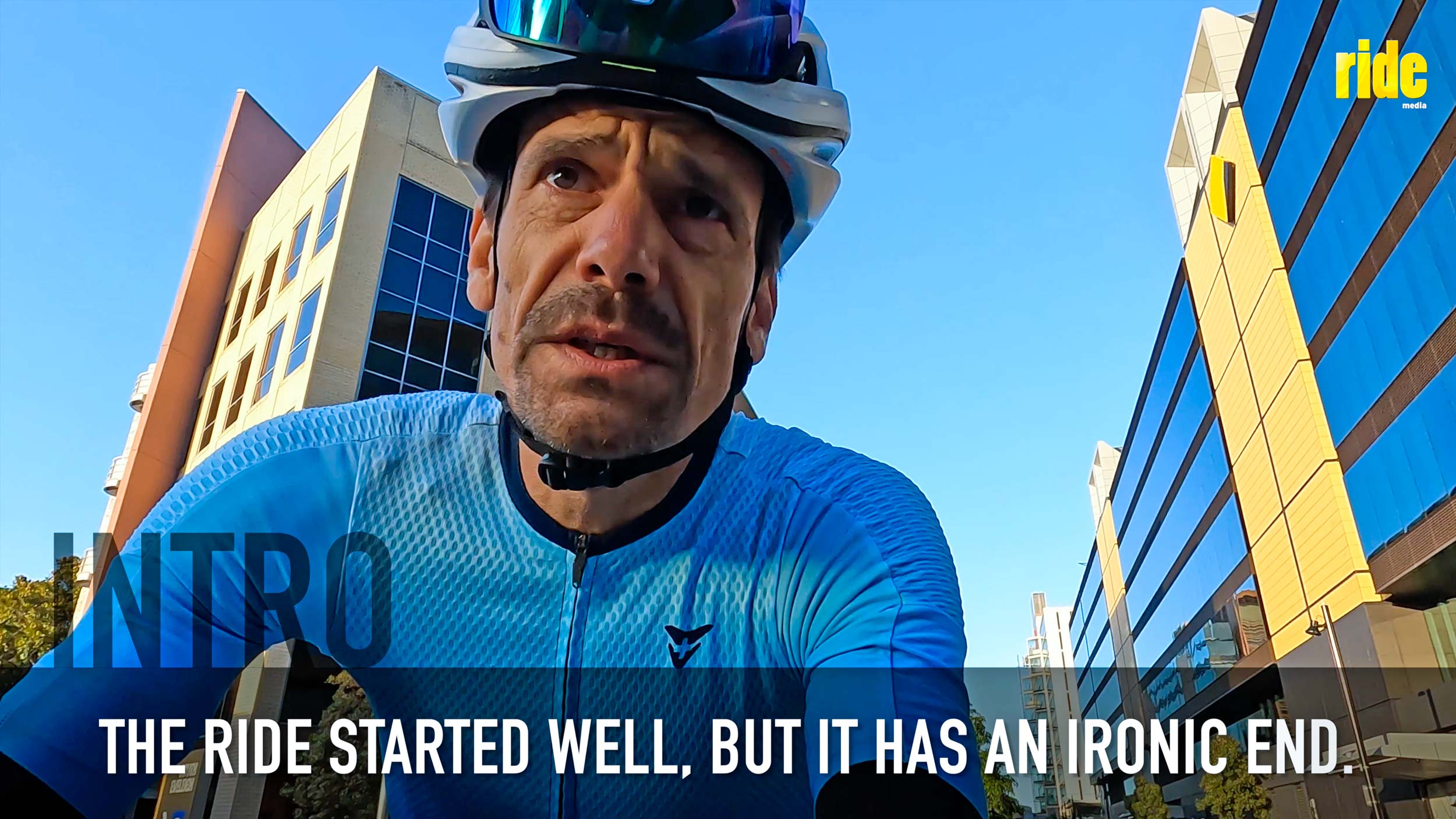 To paraphrase yesterday’s incident: a driver wanted to pass me, even though his actions were forcing me to ride faster than the speed limit in order to stay safe. Eventually he lost all sense of logic and he overtook me on my bike, going down a hill, around a blind left-hand dog-leg turn. He crossed the solid lines in the centre of the road. If anything was coming the other way it would have been annihilated by his ute.

Tyres screeched as he accelerated past me, going well over the speed limit and then – as so often happens in situations like that – tyres screeched again as he pulled up, opened his window and waited for a confrontation.

After what I’d been through, just to save myself from crashing, I was ready for the confrontation he craved and I didn’t back down. “What the f— were you doing? You’re trying to overtake going down a 10 percent hill.”

We rolled on for a few more metres and then his mind must have shut down. What was his response to an already dangerous situation on a steep, but quiet, suburban street? Well, he did what his instinct insisted he do: he steered into me, nudged my handlebars and my right hip with his ute, forcing me to take evasive action or else I’d be underneath his vehicle.

The good news? I’m okay. Shaken, but not perturbed.

Trust me, this cycling caper – as you’d likely know if you’re reading this column on this site – is a good thing. It has its moments when you do start to wonder why people do the things they do… just because you’re riding a bike in proximity to them. Yesterday’s incident is one such example: ie. when someone believes using a vehicle as a weapon is a reasonable thing to do in a peaceful society.

But please don’t be put off. Don’t stop riding. Don’t let the bastards win. Keep riding – that’s what I’ll do, because it’s what I’ve always done.

I’m adamant about my space on the road; I’m allowed to be there. Still, I’m also upset that such things happen. Why would someone deliberately drive their vehicle into someone else? It’s a question I cannot answer because there is no rational answer.

I’m not immune to allowing emotions to boil over. I’ve certainly expressed myself in a manner that is not acceptable in most situations. And I regret those times when I’ve abused someone in traffic because it achieves nothing.

Temper fray. Anger is ignited. And situations in traffic can come to a boiling point in a matter of seconds. That’s what happened yesterday and, thankfully, no one was harmed in the interaction that I never wanted to have. (I have it all on video, by the way – and this would prove most useful later on… but I’ll get to that shortly.)

After it became apparent that the through-the-window discussion was going nowhere, I stopped and collected my thoughts. He drove off, eventually, maybe feeling satisfied that he “taught that prick on a bike” a lesson.

It took a few minutes for me to consider what to do next. I rolled down the hill then decided to make sure that I had his phone number (which was painted in 500 point type on the door of his ute, the same door he used to nudge me when he steered into me) and number plate details.

By then, this driver – an owner of an air-conditioning company (which I’ll refrain from naming) – was inside a residence and his ute was parked out the front. I filmed the ‘weapon’ and… well, set off to continue my ride.

Alas, the thrill was gone. The good morning on the bike had turned sour. The impetus of the moment was deflated. My motivation was ruined. And I just wanted to get back home safely.

Before ending the ride, however, I stopped by the police station. There was one constable at the front desk. He was absolutely fantastic. He listened to my explanation. He understood my description of the incident. And he asked if I had the driver’s details. “Yes,” I told him, “I’ve got it all on camera.”

We watched the footage together; I was reminded of what had just happened and was pleased to see that my recall – what I’d told the officer – was factual. I’d warned the constable that strong language was used, and he nodded. “It happens,” he said. And after seeing the vision, he added: “And I understand.”

I wish I never swore. I wish I’d just been able to keep riding. I wish the incident never happened. I wish I never had to attend the police station. I wish the driver realised what he was doing was dangerous. And that final point brings me to the conclusion of this story.

“What would you like to do?” asked the police constable.

“I’d like him to know that what he did was wrong.”

I didn’t press charges. (I could have.) I did get home safely. The constable did call the driver of the ute. They did have a chat. And the driver did admit, “It was a mistake.

“I shouldn’t have tried to overtake him,” he told the police officer. “I didn’t realise how fast we were going. I was wrong.”

The constable relayed that reaction to me over the phone a few hours after the incident. We spoke about what the outcome could have been – how it could have ended much worse – and we agreed that it would be highly unlikely that the driver would perform such a manoeuvre again.

“When he heard that the police wanted to speak with him,” the constable later told me, “he got a bit worried.”

It is all bizarre. But what strikes me as most odd is that it’s often only when a figure of authority confronts a perpetrator that they realise that their actions are wrong. In the heat of the moment, however, they believe they are doing the right thing. And that’s what’s so upsetting; logic is lost and actions are performed without consideration for the consequences. Why? I’ll never know.