The photos tell some of the story: there was a chaotic moment during the elite men’s scratch race at the Australian championships on Saturday night. The good news is, all involved avoided serious injury.

Was it a touch of wheels or a nudge of a shoulder that caused it? Maybe we’ll find out after we speak with Jensen Plowright or Blake Agnoletto or Declan Trezise, but for now let’s take a look at the sequence captured on camera by Ryan Miu and marvel at the agility of the riders who hit the boards hard on Saturday night. 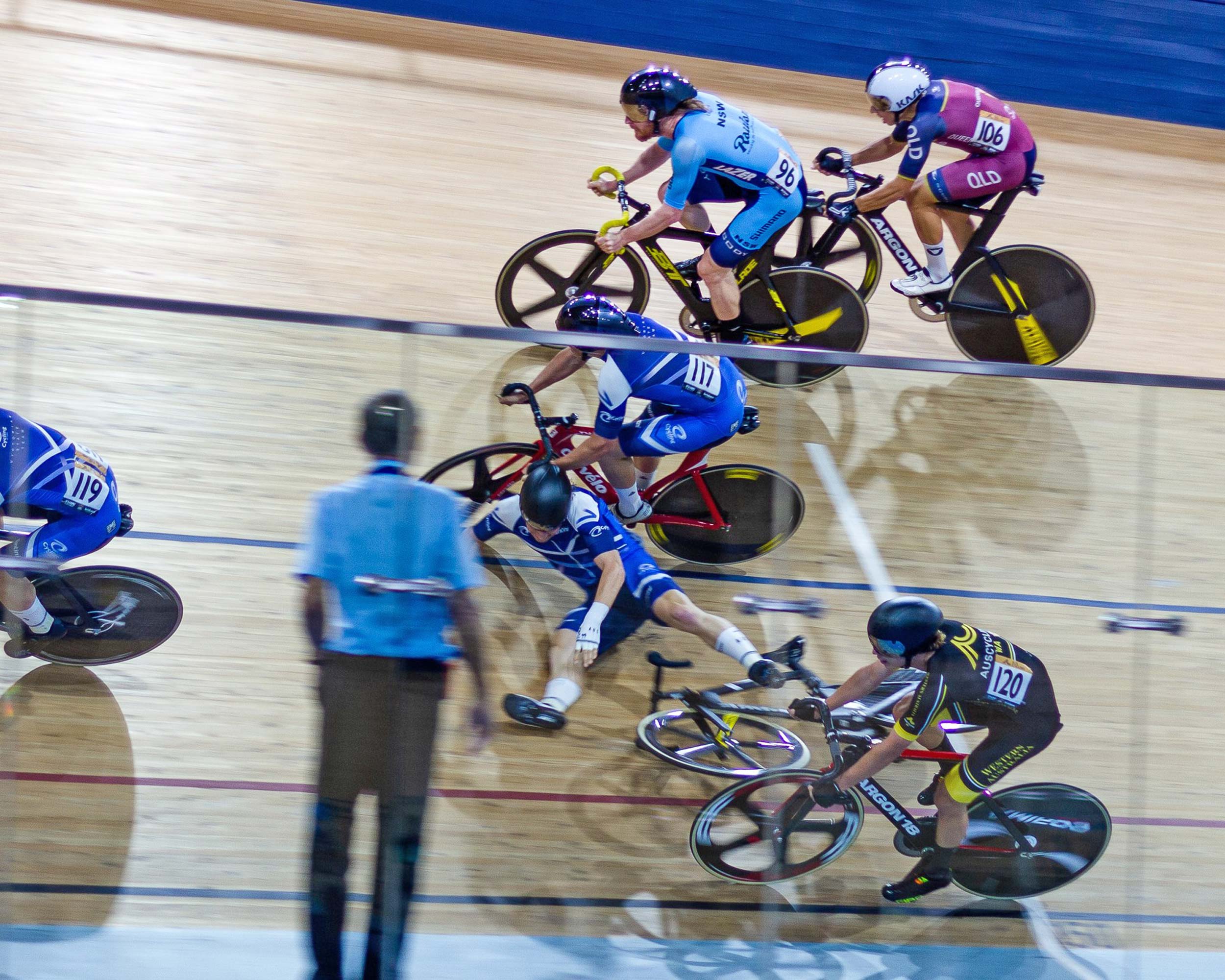 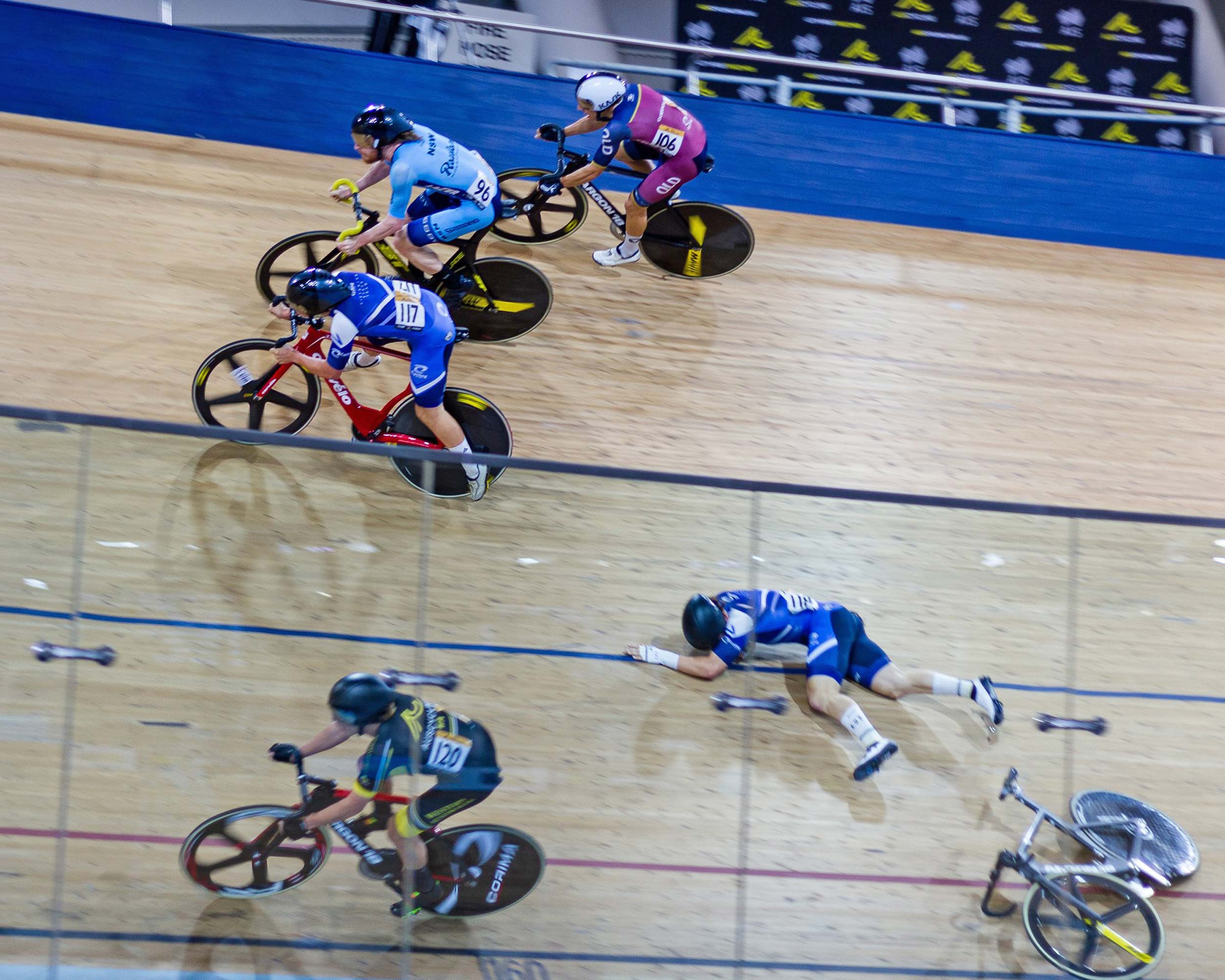 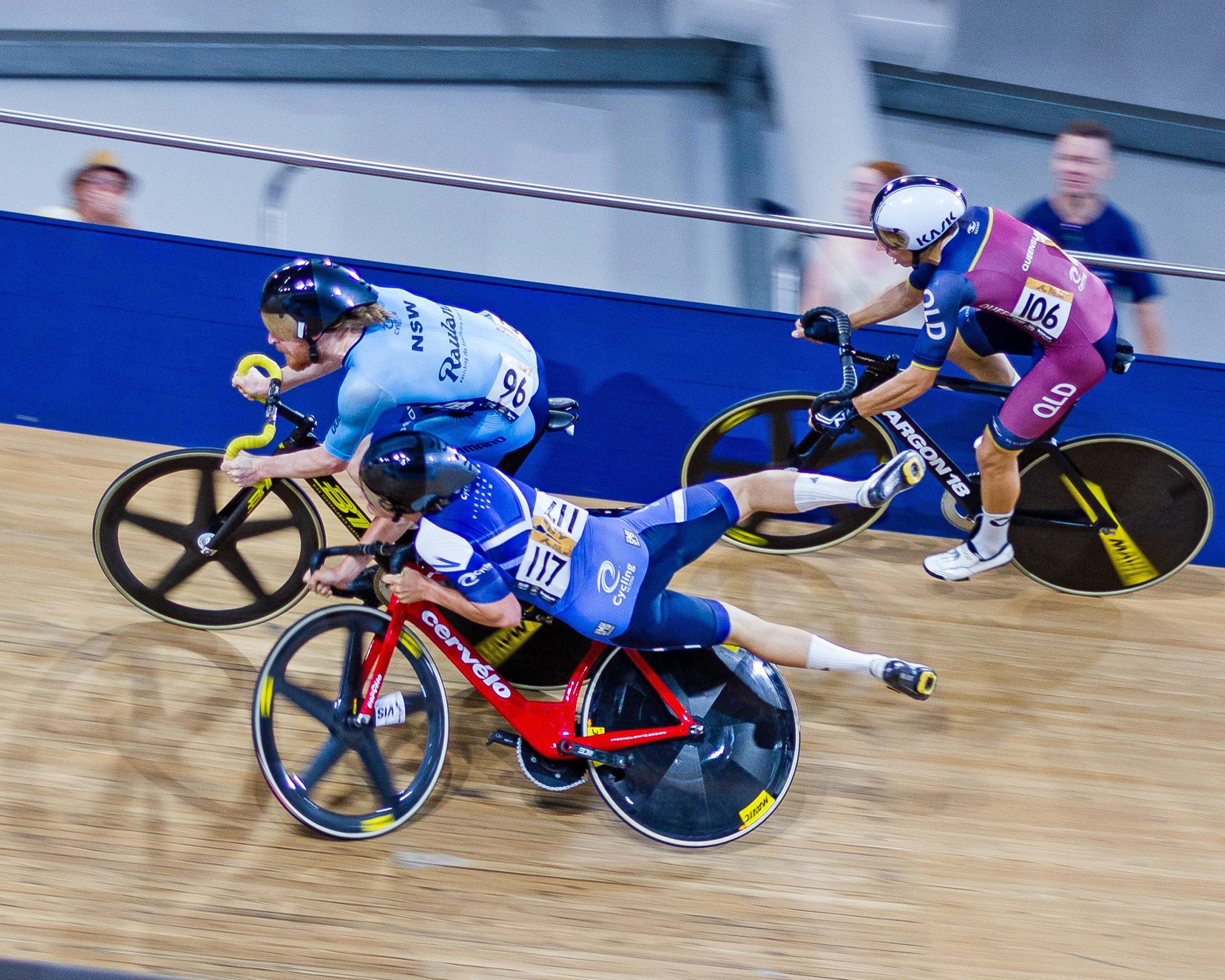 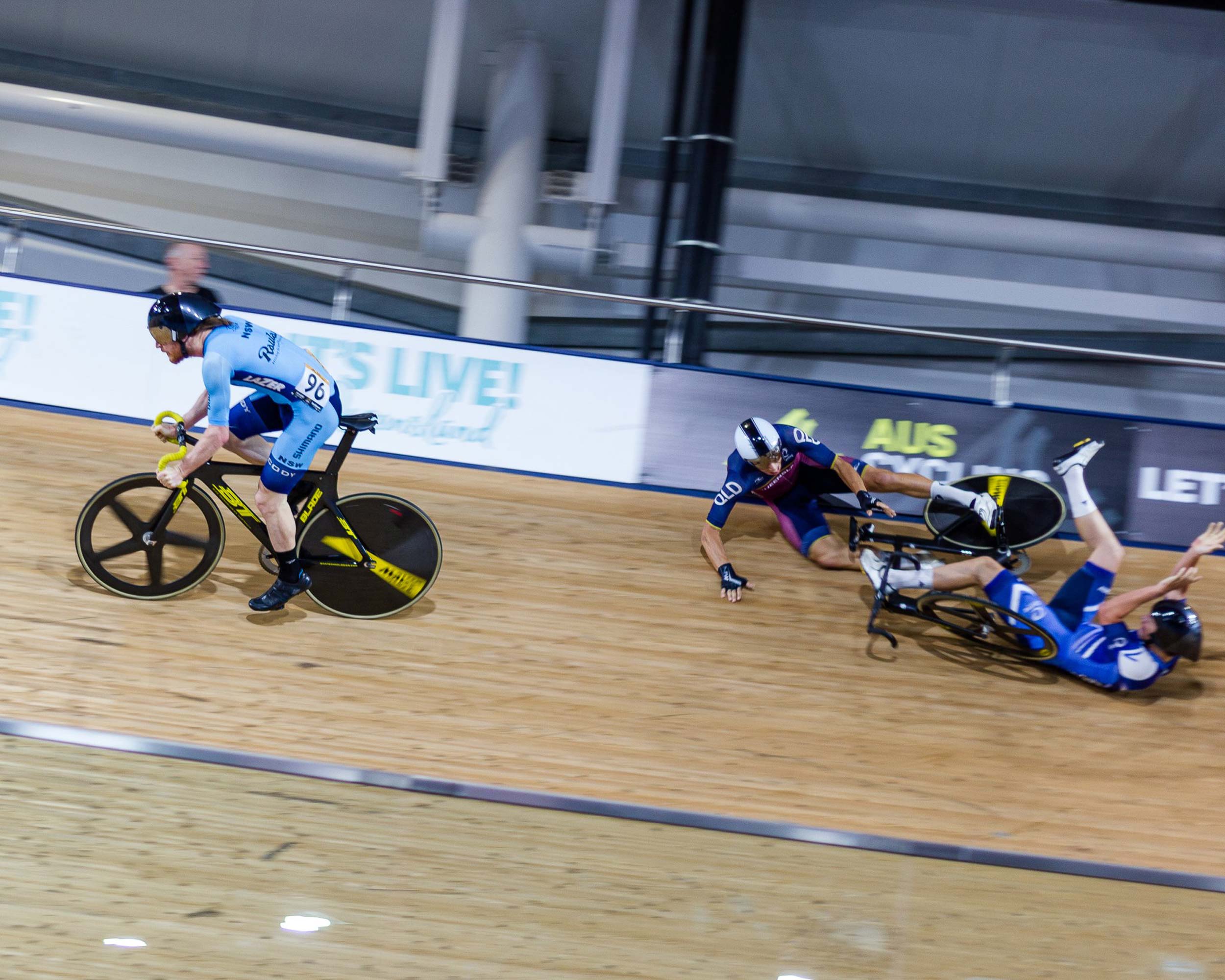 The official report by AusCycling offers a quick overview. “From the gun, the pressure was on for the elite men courtesy of a daring but unsuccessful attempt to gain a lap from Haddon Kilmartin,” writes Joshua Davies about the scratch race at the nationals.

“The intensity never wavered and would culminate in a series of courageous one-out attacks by firstly Jordan Villani and then Josh Duffy, who looked at one stage to have the win all wrapped up.

“A rapid chase led by eventual silver medallist Oliver Bleddyn reeled Duffy back in on the final passing of the back straight, leading to a moment of chaos,” continues the report which explains that Victoria’s Graeme Frislie scored the win… while a couple of his team-mates – Jensen Plowright and Blake Agnoletto – were caught in the crash you see above.

“All three riders,” concludes Davies, “were thankfully unscathed from major injuries in the incident.”

RIDE Media spoke with Plowright to find out how he coped with the injuries. He says he was “a bit sore” but the results on Sunday suggest the bumps, bruises and burns sustained didn’t slow down him down too much.

Twenty-year-old Plowright won three gold medals at the #TrackNats, first in the team pursuit on the opening night (3:58.547, along with Henry Dietze, Patrick Eddy and Graeme Frislie), the omnium and, on the final night, the points race.

Plowright is part of the AusCycling youth academy and he races on the road with Team Bridgelane. The sub-four minute team pursuit at the nationals is proof that there is depth in Australian pursuiting. It is not, however, the first time some of the young riders have gone so quick in the 4,000m event.

“We have done some trials with the youth academy,” he explained, “and did a 3:57 in the first attempt, then we rode a few 3:54s…” but he knows that, despite his form and run of success at the nationals, there isn’t likely to be any chance of him going to the Olympics in 2021 as the endurance squad for the Australian team was essentially finalised a year ago.

“I knew my form was good from the omnium,” Plowright told RIDE Media on Monday morning while he waited for his flight back home to Victoria.

“I was keen to have a crack in the scratch race,” he says with a laugh, adding, “but I never really got that chance.”

Plowright’s scratch race ended with the crash that took him and Agnoletto out of the results, but he was back in action on Sunday when he successfully defended his national title in that event.

“I took a bit of skin off my right arm and my buttocks,” explained Plowright about the ramifications of the crash on Saturday night. “I’m also missing some skin on both knees and my elbows.

“When you crash on the boards, it takes a couple of layers of skin off and then it’s just a burn.”

He didn’t seem too disturbed by the injuries but did admit that “it does sting a bit to get in the shower”.

“I was a bit sore,” he said, “but I went on the rollers and kept myself moving and I’m proud to have finished off the championships with another win.”